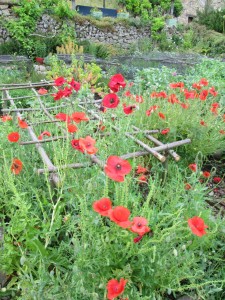 You would think I was growing more poppies than peas here.  But that’s a potager for you; chock full of both.

I don’t have it in my heart to pull them up but they are thuggish. Luckily there is room in here to share.  But I am cross about the critter I am forced to share this beautiful space with.  The mole rat is working his way through the lettuce bed faster than I can cut them.

I saw him in action today. A lettuce and then an hour later, three leaves on the surface and no roots underneath.  Wretched beast.  I did spend time building a barrier around the carrot beds with metal reinforcing rods.

But if the mole rat wants to get at the veg I suspect he will.

It was a day of critters: my favourite one first off.  He stalked into the potting shed where I was potting on basil first thing and gave me the death stare.  He flicked his tail, contemplated his water bowl, and walked out. 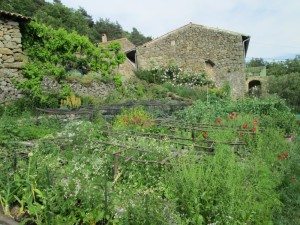 But it was all show.  As soon as I sat down on a step nearby he came hurtling towards me, all ecstatic kneading claws and purring roars.  So we are friends again.

My other encounters were more of the yech variety. A huge toad in the doorway where my strimmer lives, and when I hauled out the mower and lifted the lid out popped a very frightened mouse.  (Gave me a fright too.) 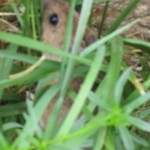 I caught a snap of him as he raced over to hide by a wall. Not a brilliant choice. Luckily Artur was nowhere nearby.  He was snoozing in the asparagus bed. I went up there to pick the easy to reach cherries from the tree that abuts the top vegetable garden and he followed me and just stayed.

Which was a relief as I seemed to have spent ages attending to his every demanding meaow all day.

For a while there after the flowers and the herb picking I seemed to flounder a bit.  So much to do, where to start? 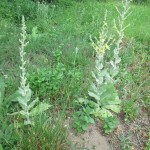 I actually spotted three verbascums on the lower terraces so decided I needed to nip down there and cut the beasts before they flowered.

So what started out as a short and gentle secateur job ended up being an all tools blazing afternoon. 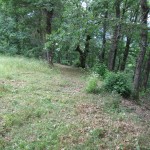 We have so many baby chestnut and cherry seedlings sprouting under the big trees on the lower terraces.  So they needed strimming.

But I’m learning that I only get one go of the strimmer (ten minutes) before it conks out.

So now I just leave it to recover (imagine a green machine panting with exhaustion in the shade of the trees) and get out the mower so I’m not cross and can get on. 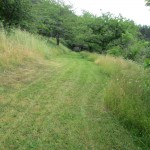 I have tackled the waist high path that leads down to the lower terraces – more work needed. And even ventured onto a larger terrace.  But I need to have a good day of work down there and it can wait. 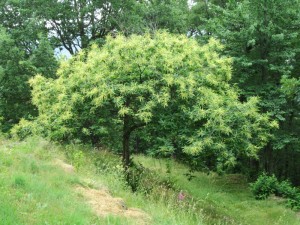 But I did do the first terrace as the verbascums are trying to grow up in the lawn. And it’s so restful having just one terrace that isn’t on a steep slope, isn’t full of brambles and nettles, and doesn’t have low flying branches which thwack you in the head as you go past.

Oh, and here is one for Aunty Ruth and Uncle Bill. One chestnut tree in flower. It’s not a patch on your huge and neat and gently sloping ‘orchard’ at Mt Irvine, but at least this small one is fetching.