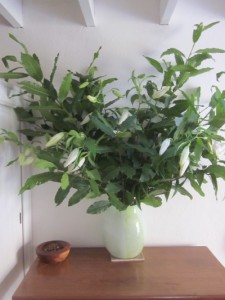 Foliage. I was in search of something tall and green for the vase at the hallway entrance to the house.

We have a huge vase given to me by lovely Agathe for my 40th birthday. Or was it a wedding present? Goodness, I can’t remember. But it’s a treasure, and it calls for very dramatic flowers.

I had six very tall lilies which I have been growing in two terracotta pots. But what to accompany? I set off with my secateurs thinking that green oak might do. But none of the branches were tall enough or straight enough.   Deutzia? Too dull. And then I walked past one of our numerous chestnut trees and had an idea.

Well, it’s an experiment really.   I don’t know how chestnut branches do in a vase of water. But so far they look fetching with the tall lilies. And I shall monitor the vase to see how they do.   I just hope they aren’t like hollyhocks that took one look at their watery confinement and turned up their toes. Well, leaves. And gave me a lovely invasion of ants who swam for it just before the end. And I spent a very unhappy afternoon hunting them down and Dealing With Them.