How can a potato called Pink Fir Apple be French? I wish I hadn’t started delving.

I don’t plant that many potatoes here on the farm. They are mainly confined to the upper potager. And as I don’t rotate madly up there: asparagus and lilies are fixed in place. That leaves just a few rows for the brassica and the potato crops.  So some years I decide – ugh, too much effort for too little reward. 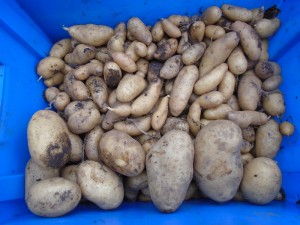 Potatoes need water and that is one thing that top vegetable garden doesn’t get.  It’s erratic. Either it rains like a drain – last year. Or there is a heatwave and a drought – this year. And hauling the heavy hose all the way from the tap in the courtyard exercises one’s core stomach muscles and arms. Great if you need a workout. But not so much when you have to take all the time to wind and unwind the few hundred feet of hose.

All this means I can get so disheartened with this one crop.  You put all the work in for clearing the soil; digging the trench, planting the tubers. Then earthing up the soil. Never having enough soil to earth up again. Dealing with weeds. Mulching the crop with lawn clippings. And finally harvesting small potatoes a few months later that it all seems such a faff for a product I can easily get very cheaply from my neighbours.

Some years I just sow a crop of crimson clover and think that is a whole lot nicer.

But new potatoes. Charlottes, just dug up and boiled lightly and served with mi 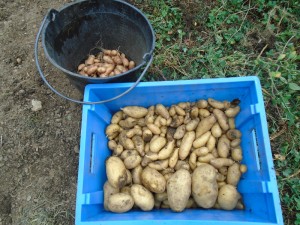 nt. Too delicious. And I even give in and bring over seed potatoes of main crop Pink Fir Apple from England and plant those.

I did it this year. In the drought year. Here are the results.  The little tubers never had a chance to grow into individual potatoes. Just all stuck together like toys.

I had blithely thought that with such a ridiculous name it would have to be British. But no.  Apparently it comes from France.

If you want to become potato obsessed (and my late father in law was a potato breeder, so I Have Experience) have a look at the European Cultivated Potato Database. It’s gripping.

Apparently our preferred spud was bred around 1850 in France.  But I have never seen it here. But then maybe I’m not looking hard enough.  I do know that when I serve it to French friends they tend to fall off their chairs laughing at the ridiculous shapes and then ‘quite liking’ the nutty flavour.

I didn’t harvest enough for many feasts, but there are a few to make a tasty meal. When I can stop trying to find the spuds that most resemble animal shapes and actually cook them up. 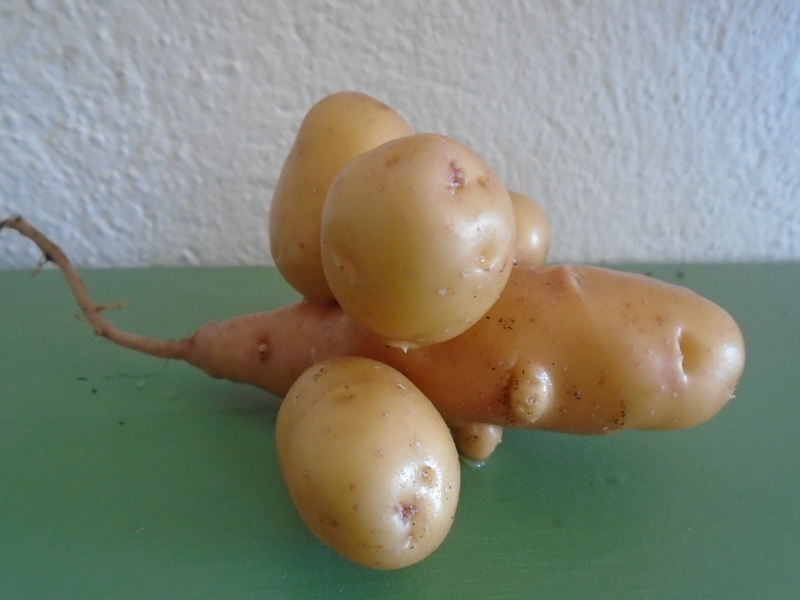