Why do you live where you do? 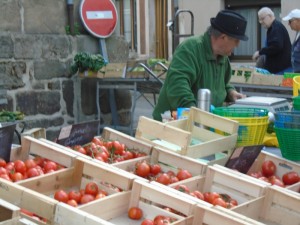 Thursdays. That would have to be my favourite day of the week. Late morning, driving back from the market where I will have delivered my flowers and done my weekly shop.

I will have caught up on gossip with my friends and picked up the essential items of happiness; tomatoes from Monsieur Bois and fresh rye bread from our favourite bakers. Plus my weekly treat. Two chocolate éclairs which will be sitting beside me on the seat, neatly wrapped in their decorative cardboard box.

But not for long.

When you live so far from a source of chocolate heaven, you have to adjust your levels of acceptable greed. I used to buy just one, and now I have no shame in admitting I buy two. And I remove the fiddly ribbon (so hard to undo with one hand while driving) before I set off on the 20 minute journey back home. 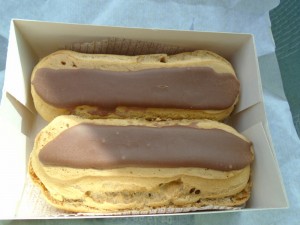 The roads may be winding and the old car hard to steer one handed, but a chocolate éclair will be out of the paper and I shall enjoy savouring the soft crunch of choux pastry and oozing chocolate cream as I manoeuvre round the mountain bends.

Out of Vernoux, down over the river at the Pont du Belay, and up through the mixed pine, cherry and chestnut forest on the other side. If I’m lucky the resident bird of prey – a buzzard – will be sitting on its preferred perch of a fence post when the forest opens up to farmland. The perch is so close to the road you feel you can count the tail feathers on the huge bird; but slow your car too much and he gets spooked and swoops lazily off. 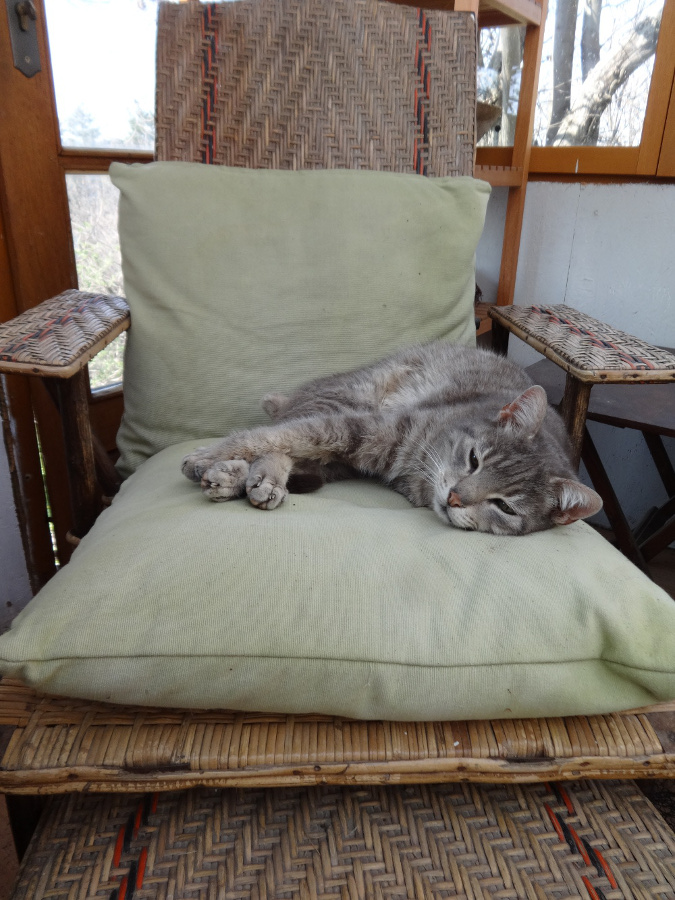 The éclair will be finished by the time I reach the little village of Silhac, and then it’s downhill through forest and fields all the way until I drive up the road up to our farm.

Kettle on, second éclair plated up properly this time, with a linen napkin no less, and then I shall carry my tray of teapot, cup and saucer and éclair up through the garden to my potting shed. I will plonk into the old fashioned rattan chaise longue with large plump green cushions and the cat will be roused from his current snoozing spot. If I’m lucky he will sit on my lap, attempting to sneak a bit of pastry from my plate when I’m distracted trying to pour my tea. 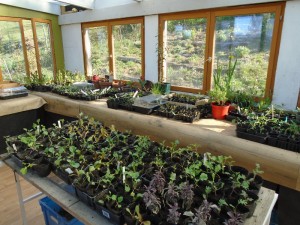 I can gaze at all the plants I have sown from seed on the long staging tables in front of me, or look up and out to this incredible garden and farm. And if the cat is settling in for a long snooze, I might not even get out of the comfy seat to attend to a thousand chores for minutes on end.

Welcome to a small slice of life in our part of rural France.

If you have ever stopped to ask yourself the question ‘why do you live where you do?’ then you are better than most. People live where they do out of sheer chance, good luck, or bad. For work, for children and their hard to get into local schools; to be close to families, to be as far from families as they can. Take your pick.

We chose to live on this farm in France because I was desperate for a garden. A big garden. And my husband, like me, was tiring of city life. 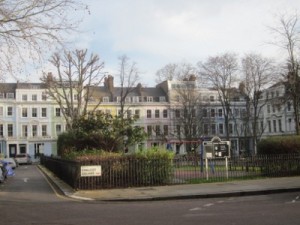 We lived in London for work, and stayed in the same neighbourhood for twenty years. It was so close to green spaces, even if they weren’t my own. I could walk an hour to work through town, via as many parks as I could fit into my circuitous route. And then later, when I worked from home, it was one lap around Primrose Hill and Regent’s Park before I settled down at my long desk in the spare room.

We had no outside space. Unless you counted window boxes and a titchy balcony, facing north which you had to climb down onto and be overlooked by a building of office workers across the courtyard. Or walk up three stories to the top floor of the house where you could climb up onto a chair and open a skylight then haul your way through the window and onto a flat roof. 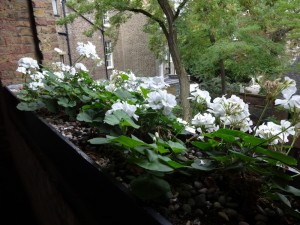 I grew Australian eucalyptus trees in pots up there.

But it was never going to be a viable garden unless I put up a ladder on the stairs; and was committed to a lot of vacuuming of spilt compost trailing through the house. And worked on my pull ups.

I was on a waiting list for an allotment garden close to home (I still am, fourteen years on) and I devoured garden magazines, television programmes, and made endless lists and plans.

I even managed to secure an allotment garden a few boroughs further out of town after just a two year wait.

But there was a catch. My first patch of proper land to garden in London was in a crowded and noisy plot beside a main highway and never out of sight of my fellow allotmenteers.

In my first year of gardening there I vowed I would always ask advice from everyone who was much more experienced them me. So I learned from the nice elderly Italian one plot beyond how best to space my brassicas, I learned conflicting advice on slug control; which were the best varieties of tomatoes, and everyone was generous with cuttings or seeds. It was gardening knowledge on fast forward.

I quickly learned to steer well clear of the irascible Oswaldo who had a plot close to the car park and could see you when you arrived. Over 80 years young and delighted to give you rocket seeds and figs from his tree, but only if he could take you into his potting shed and show you his giant cucumber first.

It was an allotment of men. And the women whom I briefly saw were all trying to hide from Oswaldo.

It just wasn’t what I imagined growing my fruit and vegetables would be like. Especially having to drive to the site with tools in the boot as they were forever being stolen if I left them in the shed.

That shed. There was the unsuspecting feud I bought into when I rented this particular piece of council land. Who actually owned the rickety shed at the end of my plot? Two men in the gardens over near the sports field claimed they had bought it for a tenner from the previous tenant years back, and it was only from lack of moving equipment that meant it remained. They used to come and visit it regularly. And it was not a relaxing scene.

I ended up being part of the entertainment circuit on many an allotmenteer’s morning break.

I was a big draw; especially when it came to be known just how much of the plot I had planned for growing flowers.

‘Cauliflowers?’ asked cranky Irishman John when he saw the seedlings going in.

Houses were not their domain, which is why I suspect so many of them spent most days at their plots.

But for me flowers for the house was the aspiration. That and growing all my own vegetables. And when you have tasted the potatoes you have grown, or harvested your first ever crop of beans you realise there is no going back.

And your life has to accommodate this now rather pressing demand.

A house in the country. Something small. We tried looking for small cottages in the country outside London – small houses and large acres of land. But everywhere I looked it seemed to be the inverse. And the prices were absurd. After six months of scouring Oxfordshire and Berkshire and even considering driving for four hours into Gloucestershire to get my fix of land, I was despairing of ever being able to leave the allotment and doddering-but-keen Oswaldo behind.

We took holidays. Rock climbing featured in most. But there were many afternoons when I could be at a crag looking not at possible routes up rock faces, but at distant farms and houses and pretending they were mine.

Thanks to one rock climbing holiday we came to shift the entire axis of our lives.

Friends invited us to climb in a part of the south of France we had never visited before. Two hours by train from London to Paris and just two more hours south to the unheard of town of Valence. Below Lyon, above Avignon along the Rhone river. It is one of those places that is doomed to be a Gateway town to somewhere else. 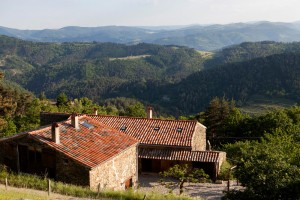 For us on that holiday that meant heading east towards the Alps. But once we realised just how easy (and cheap) it was to get so far into the French countryside from London I turned off all my searches for bijou cottages away from motorways and air force bases in England and started looking at rural, isolated farms in France. For a quarter of the price.

Suddenly working in London but gardening in France did not seem as mad as it sounded. With a bit of creative commuting, you can reach the south of France in five hours by train.

Sorry, did I say south? I meant the south east of France, in the Ardèche. 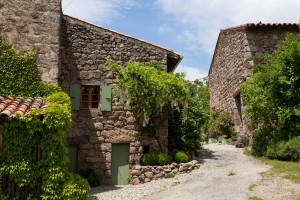 I have long ago given up telling people we live on a farm in the south of France. It conjures up the wrong images. I can rattle on about solitude and mountains and chestnut trees and majestic views over the Ardèche and Cevennes, but the person I am talking to will still be thinking about a holiday they had in Provence, or swanning about the beaches of Cannes.

It’s like that absurdly sentimental line in the beginning of Out of Africa, spoken by Meryl Streep: ‘I had a farm in Africa, at the foot of the Ngong Hills’. It takes a bit of explaining.

This is not Provence, this is a different sort of rural France, What French people call La France profonde – rural, isolated, less dependent on tourism and holiday homes than on agriculture and small industries. Modest. Often scruffy. (And that’s usually me on any day but Thursday.) And if you live here you can become thoroughly immersed in rural life.