I am thrilled to announce that this is the last bulldozer photo you are going to see in the garden for a long, long time. 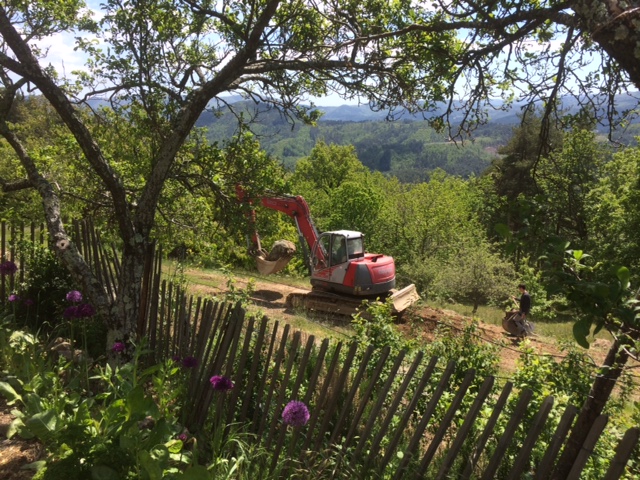 All week I have had the feeling that if there was another bulldozer, digger, truck, machine roaring up the road and ripping up yet more soil I would shriek.

Mind you, no one would have heard me over the din.

What once was lawn is now dirt. Compacted, tidy and neat dirt. 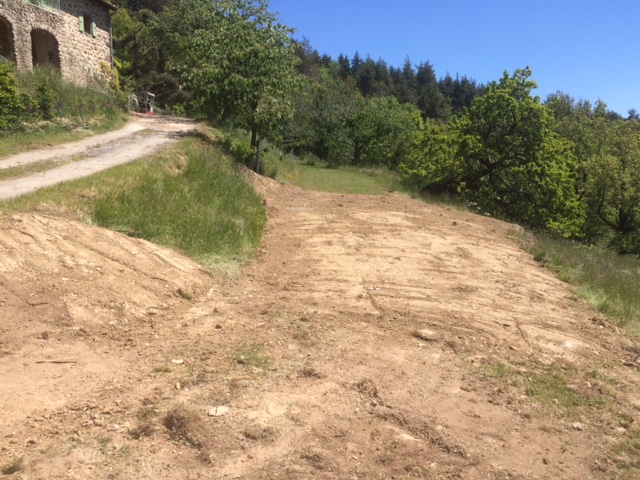 Let me take you on a last tour and then we can get on with the good stuff. Like sowing grass seed over an area about the size of three tennis courts.

The lower terrace. Where the septic tank now lurks. (Two black lids and a few pipes to aerate. I’ll soon be letting the grass (hah!) grow up in front of and around those protruding eyesores. 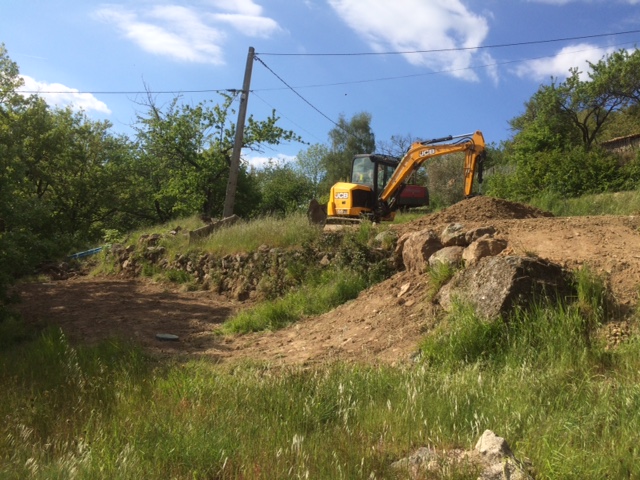 Guillaume built me a new wall instead of the slope connecting the two dug up terraces. Top one for tanks, bottom one for the soak-away field.

It is now flat which is a thrill. He dug out the tumbled boulders and placed them neatly back where they came from. About three hundred years ago. 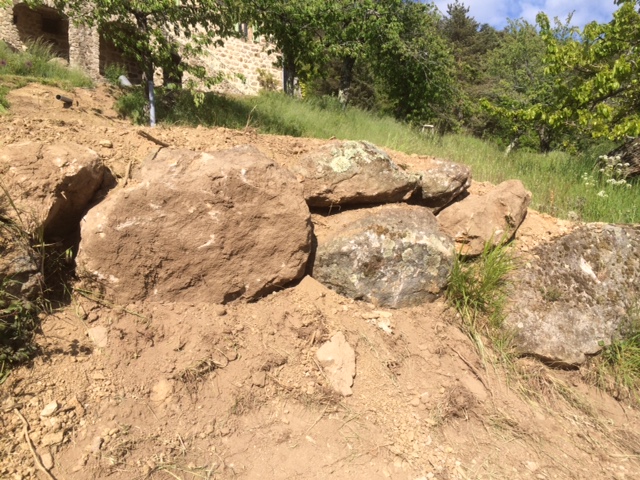 There is still a slope; to hide the outlet pipe and keep it safe in our freezing winters. But at least I can mow now when it all grows rather than do that assault course thing around hidden boulders in the long grass.

I now have a brand new play area.

What was once a narrow strip of land beside the road (devilishly hard to mow as it was just a teensy bit too narrow to safely plod down behind the mower and not fall off down the mountain…. 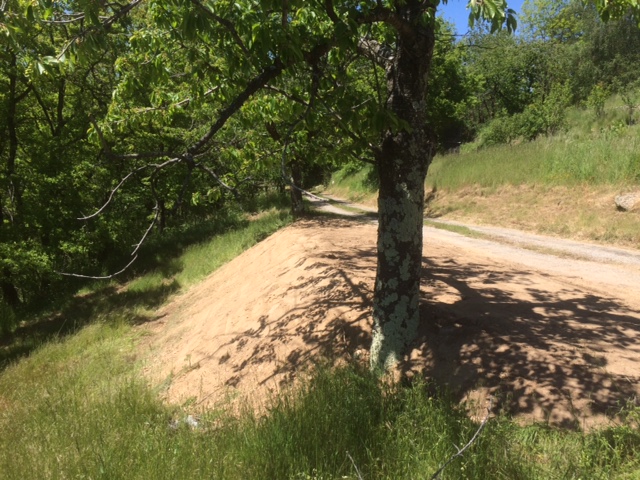 It will be a wild boar play pen if the grass doesn’t grow this summer. I have no idea how to stabilise the downside slope. But it was thumped into place with the biggest of the bulldozers, so I have faith.

The potager has been turned back into a garden again. 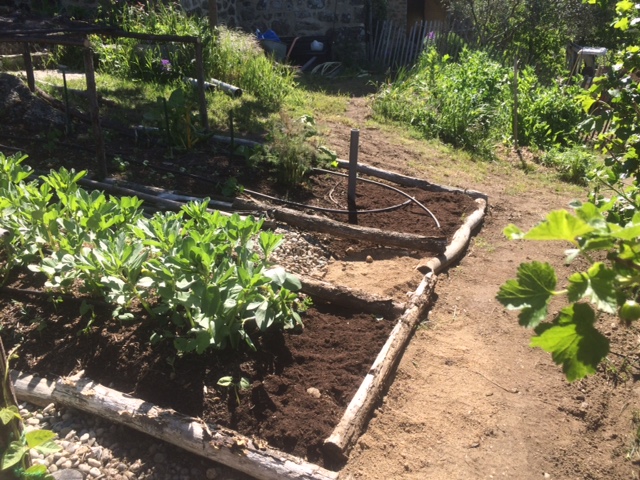 It’s entirely ersatz. I lifted the broad beans during the search for the pipe, and have put the poor things back. I wonder if they will fruit and set seed.  I’m still deciding whether to put the rose back.

It’s in the more shaded area beside the house where the new affront (building work in the autumn, ARGGHHH) will take place. 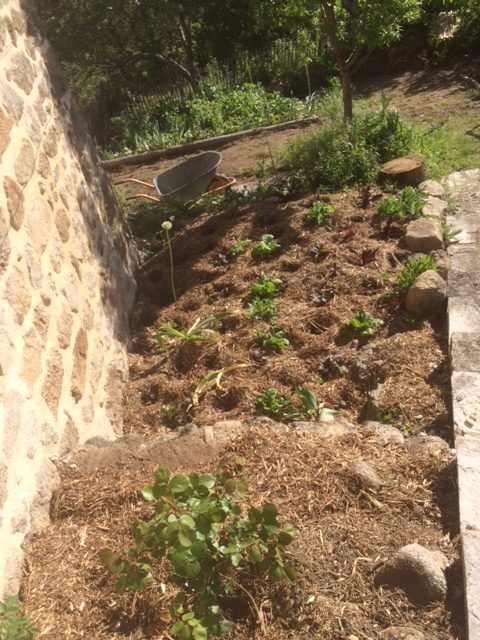 I bought some compost and shoved it on the beds. But I doubt I’ll trust anything to be planted there for a bit.  And I need to get those gravel paths relaid. 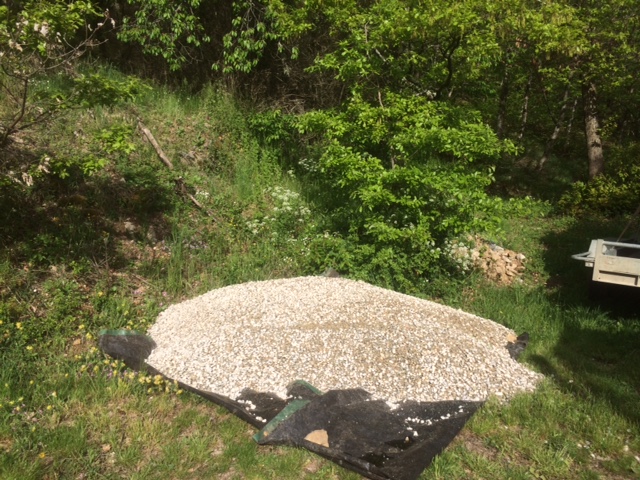 It pays to be friendly to the ‘extra gravel left over in the truck’ person.  No point taking it down to the depot 10kms away when you can just dump it up at the parking area on the handily placed tarp.

I won about a cubic metre. I didn’t dare ask them to put it closer to the house. There were no paths or tracks not churned up with soil at the time. And gift horses and all that.

The potager paths almost look as they did before. Albeit dirt and not lush stuff.

And this particular path on the lower part of the potager leads to the next good bit. 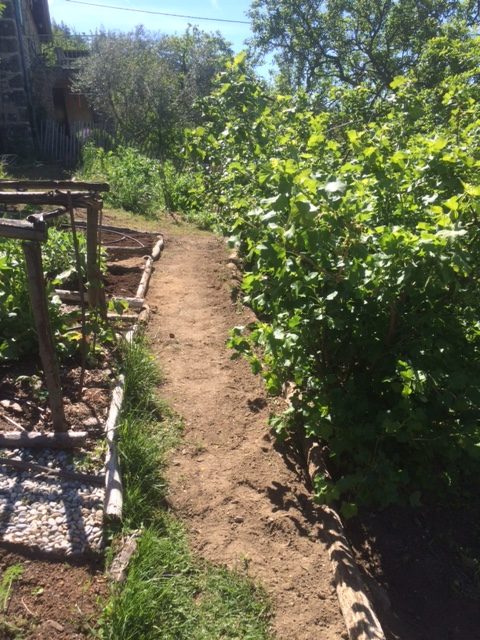 Three bucket loads of excavated soil from the lower terrace which I can use to block up the soon to be decommissioned old tank. As soon as Monsieur Cheynel deigns to answer my increasingly shrill calls. 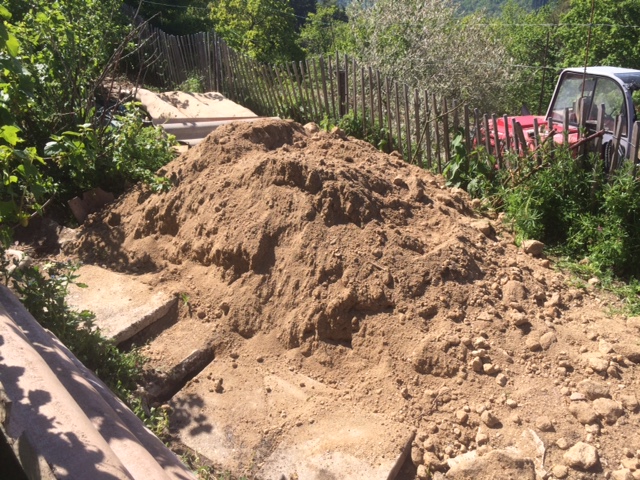 And imagine actually being able to get on and build handsome compost bins behind these blackcurrant bushes. That will be fun. After 13 years of bothersome septic it might even be fetching enough to add a bench. Steady on!

The front of the house?

It’s a dust bowl. A mess. With telltale black viewing drains all over the place. Grrr.

The lavender bank has been ‘put back’. And I have hastily covered the whole scarred area with chips from the cherry tree we had to cut down.

Did I mention that? I have lost count of the things that were ripped up or cut down this week. But mustn’t grumble.

The machines are gone. It’s just me and the dust bowl from now on. 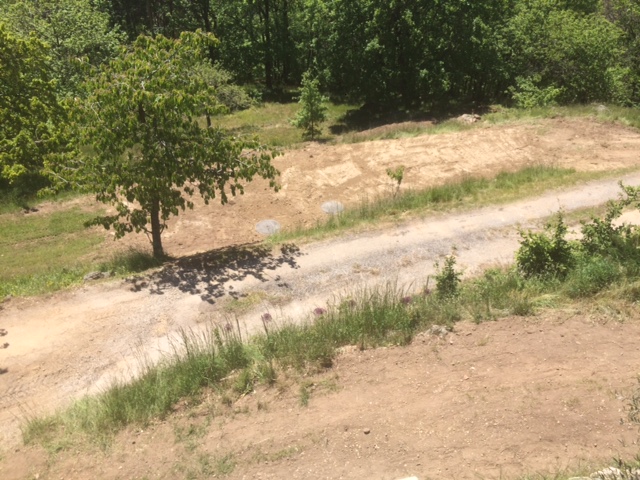