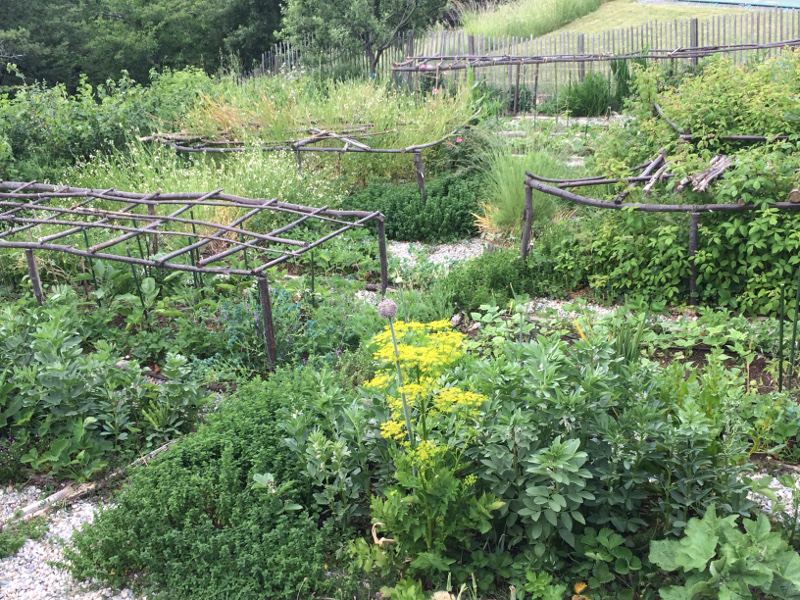 Yelp in shock, drop the dacks, run. I’ve just sat on an ant’s nest. The trousers are currently undergoing a proper inspection; I dare not put them back on and venture back out until I’m sure I will be bite free. Even with vigorous shaking they hang on. And they hide in the inside seams.

The joys of country gardening. 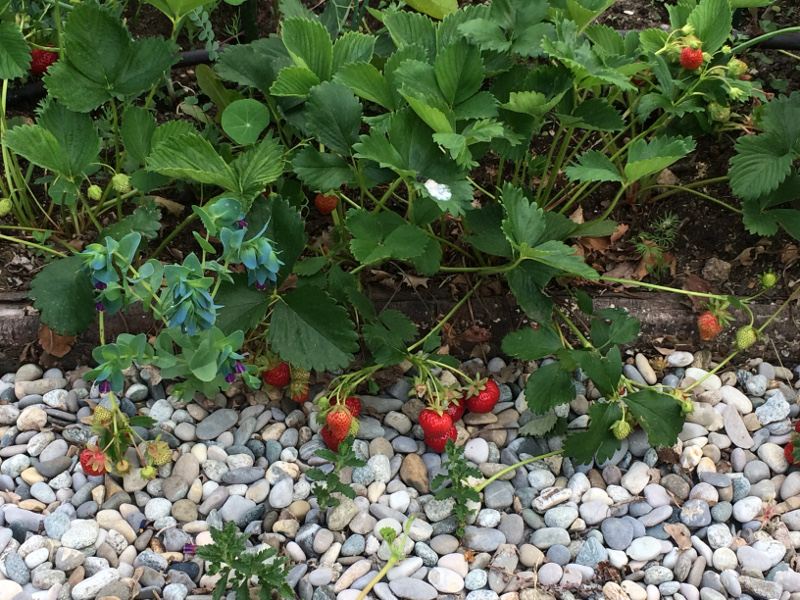 And the annoying thing is that the nest is one one of the potager paths. Somewhere.

I was working my along the paths hoovering up the strawberries and I guess it’s an inadvertent reflex to pull out weeds from the path as I go.

Can you spot the cerinthe major weed in the gravel? Dear little blue flowers. It loves the potager and I am madly yanking them out, potting them up and taking them to town. The butcher’s wife is a fan of this particular plant in her flower arrangements, so I’m handing over the little seedlings so she can build up her own stocks. 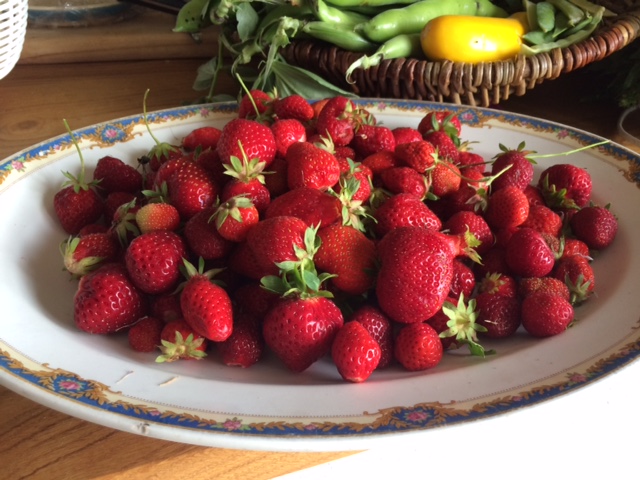 And give them to friends. I have way too many and they really are in the wrong place.

Now I’m on the clock because storms are brewing and I need to harvest before the first clap of thunder. If the power goes out, there won’t be a post tomorrow morning. 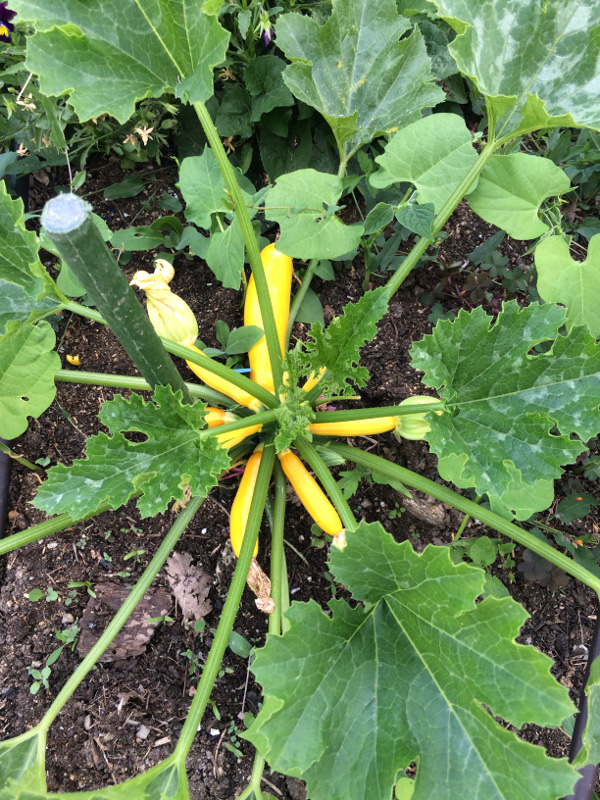 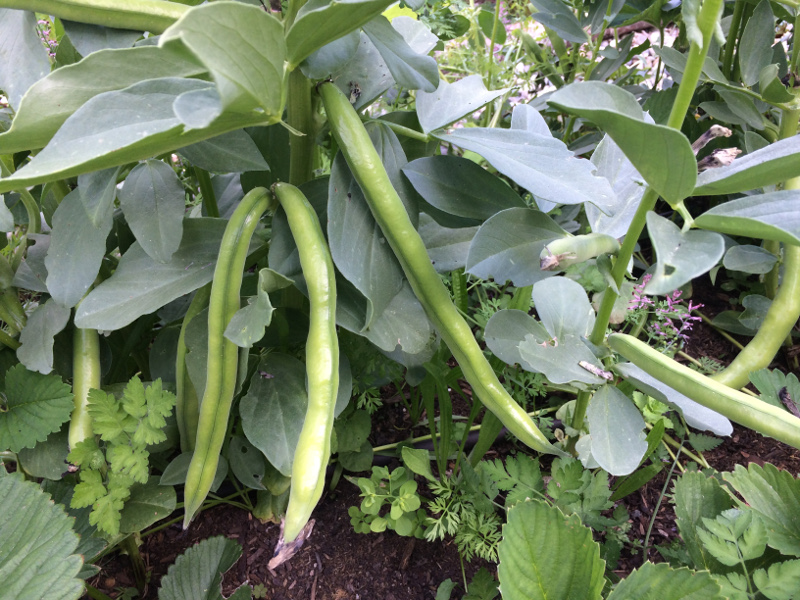 I have lots of coriander which self seeds all over the beds. It will bolt as soon as it heats up, so I’m planning lots of menus which include a good coriander garnish.

And with the broad beans I’m more than ready to harvest. I usually give them a squeeze every few days to check if they are swelling. But I must confess I’ve been busy weeding and mowing elsewhere.

And it’s a shame as it’s such a pleasing job. More fun than squeezing an avocado to check for ripeness. That’s a job that always disappoints. 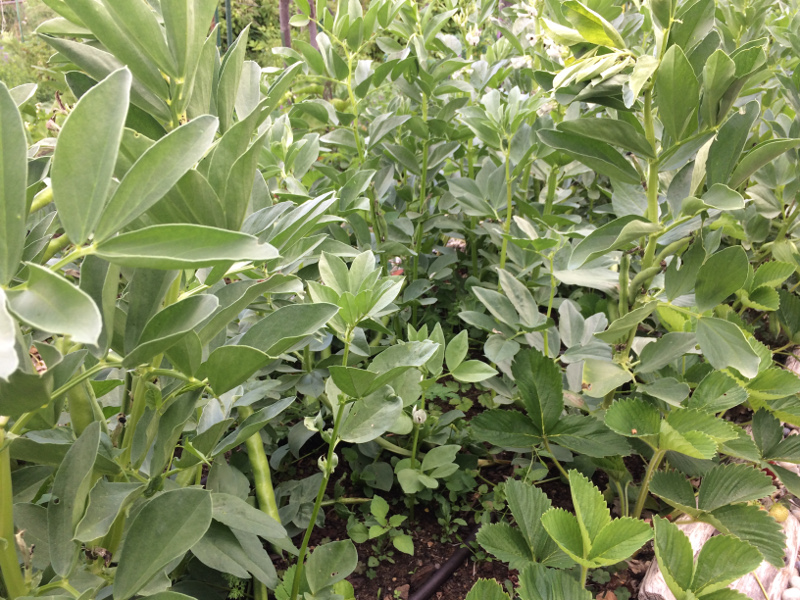 So they are ripe and ready and I need to pick. Or in this case twist and pull.

I have three beds of dwarf French beans on the go. And this bed is the most advanced. I’m dearly hoping that I will get a succession of this fantastic crop. 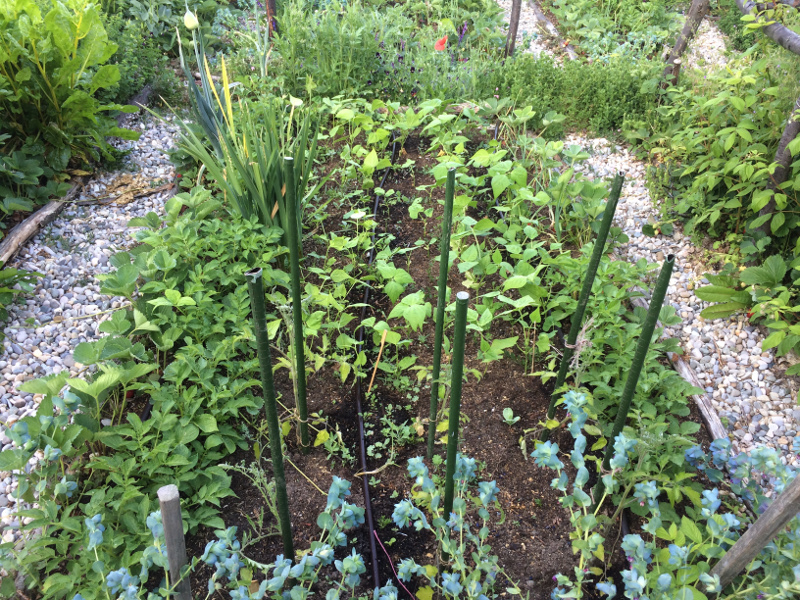 But even favourite crops have to share. In this bed you can see the tomatoes staked at the top, potatoes down the sides. And strawberries on the edge.

Oh, and cerinthe clinging to the very top above the toms. 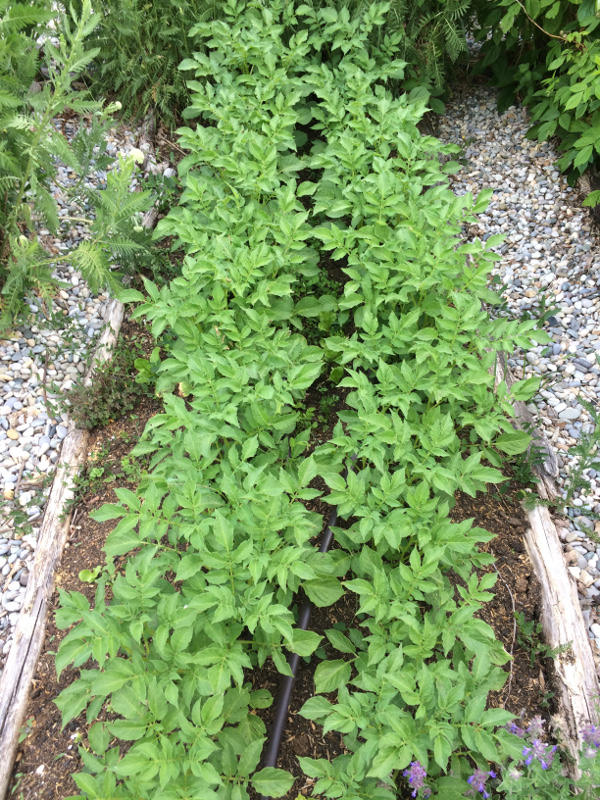 Even the main crop of Charlotte potatoes have to share. I didn’t photograph the entire bed – there is an enormous achillea gold plate plant being beefy at the top.  It is fantastic in bouquets (so stiff and tall) and it reminds me that I need to stake it soon. I just wrap twine around the whole crop to keep it from flopping and taking any light away from the potatoes nearby. 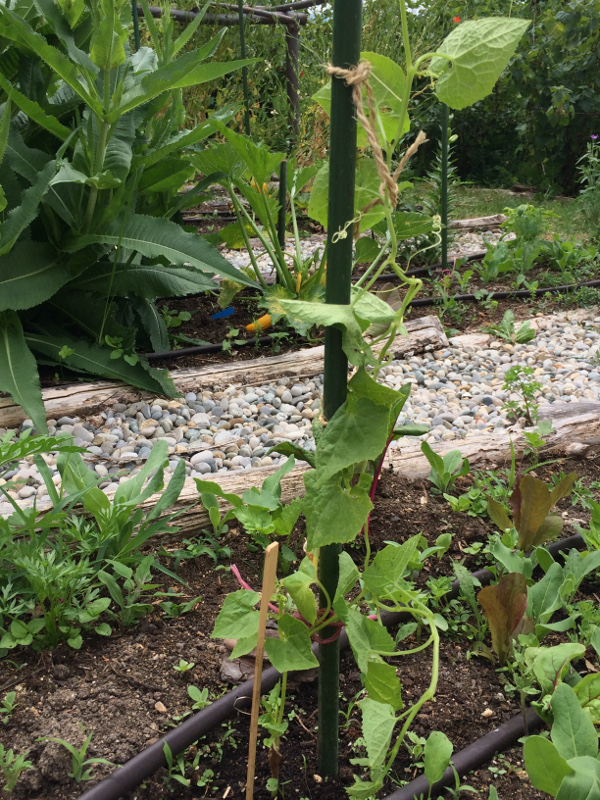 Before the ants got me, I did manage to sit down on the path near the dahlia patch and tie in my exploding cucumbers. They are growing very well so far. I might have to think of adding a horizontal support if they keep surging up the poles.  And of course I wonder why I planted them in a bed without my chestnut grid. 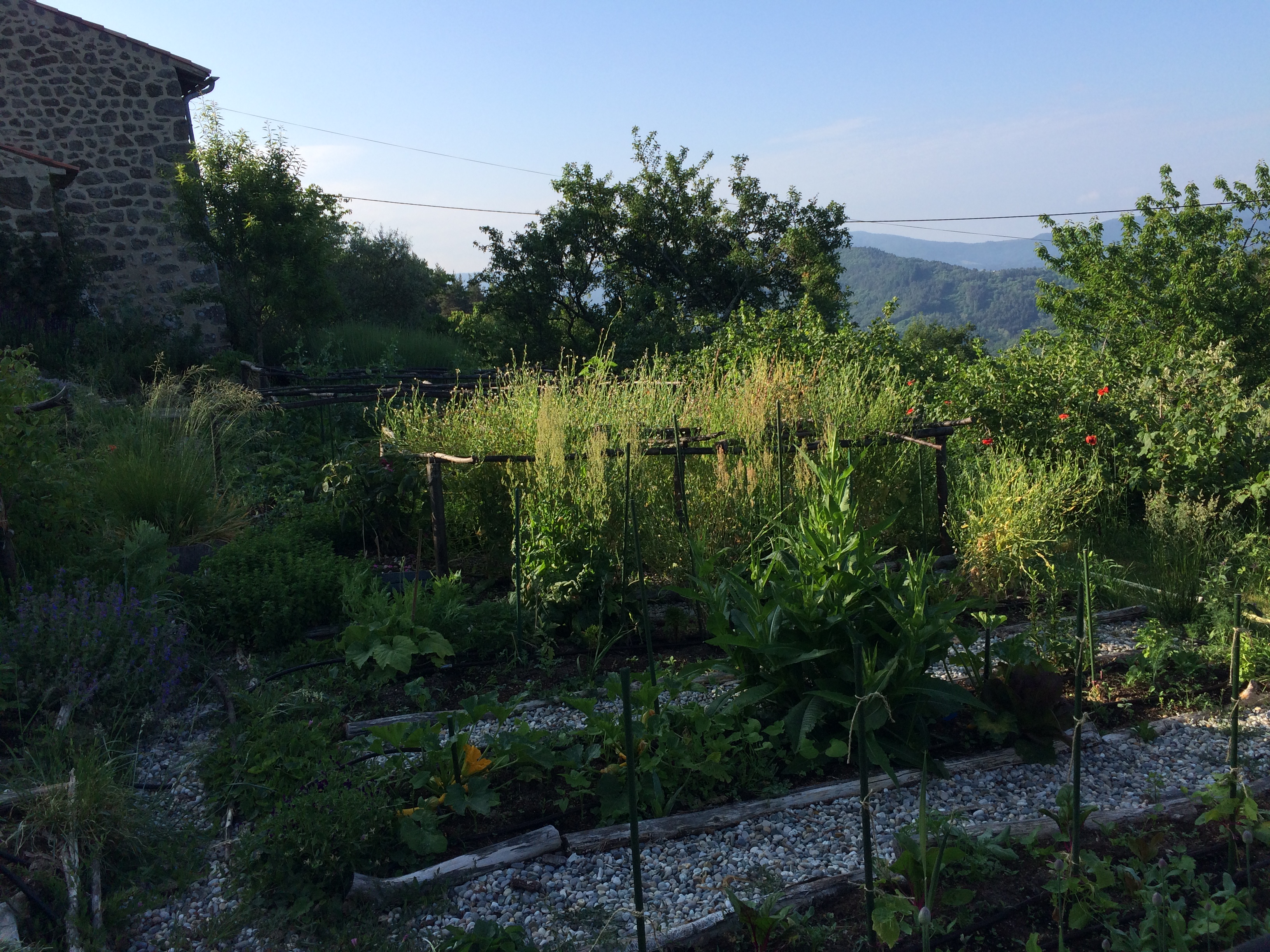 I know why. I’m waiting for all the rocket to bolt and set seed.  There are two and a half beds of huge waving plants which need to be removed. But it’s such a great groundcover plant that I have to be patient. About ten days more ought to do it.  And I’ll plant the normal cucumbers I have growing in the potting shed in the right place.

The last two swiss chard plants from two years past is finally bolting.  I can’t believe the longevity of these wonderful plants.  There are self seeded little seedlings all over the place. So they will take up where these two leave off. 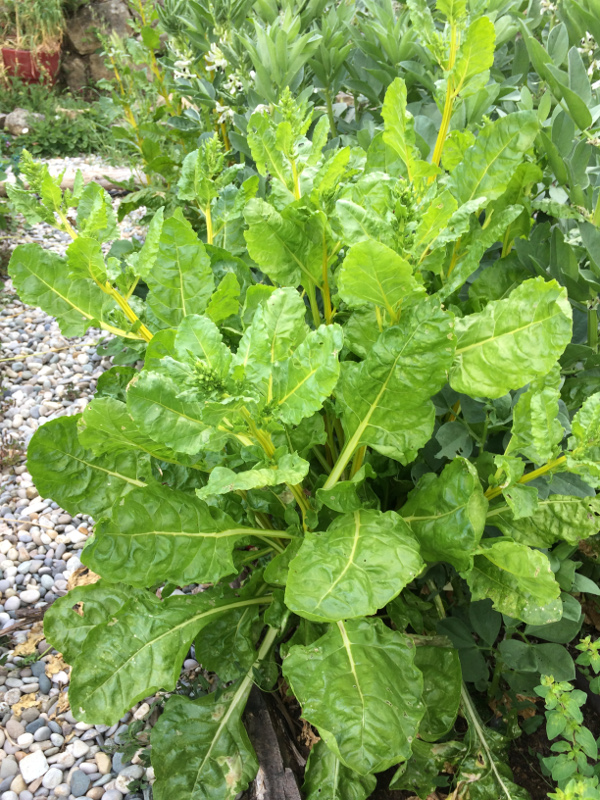 I’ll be doing a large stir fry tonight with these swiss chard stalks (blanched for one minute first) and leaves. Plus the courgette and the snow peas.

Artur came down to join in weeding. Well interfering is more of his specialty. I did cheer up when he started sniffing the mole rat hole which I unearthed near this aubergine and sunflower bed. 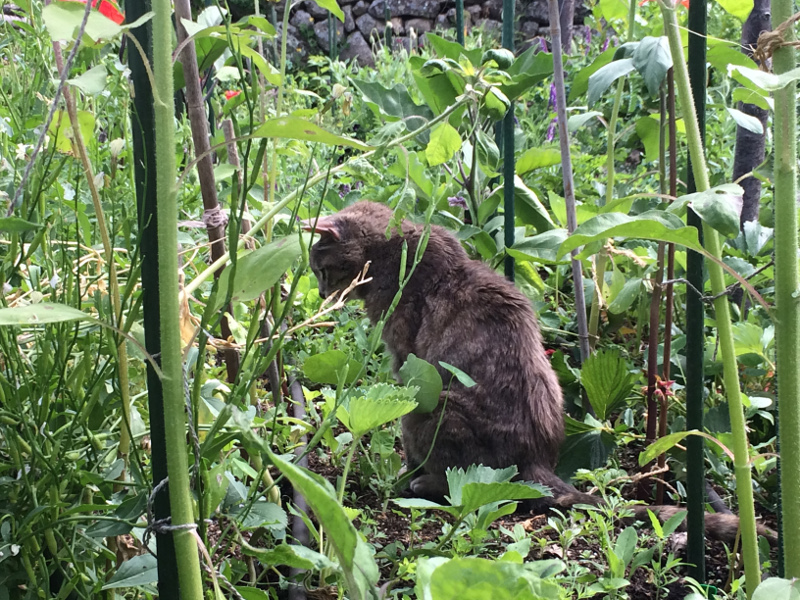 He was all alert and poised and quivering. Suddenly the clock seemed to wind back four years when he was such a great hunter.

But after about a minute he gave up and decided to snooze. 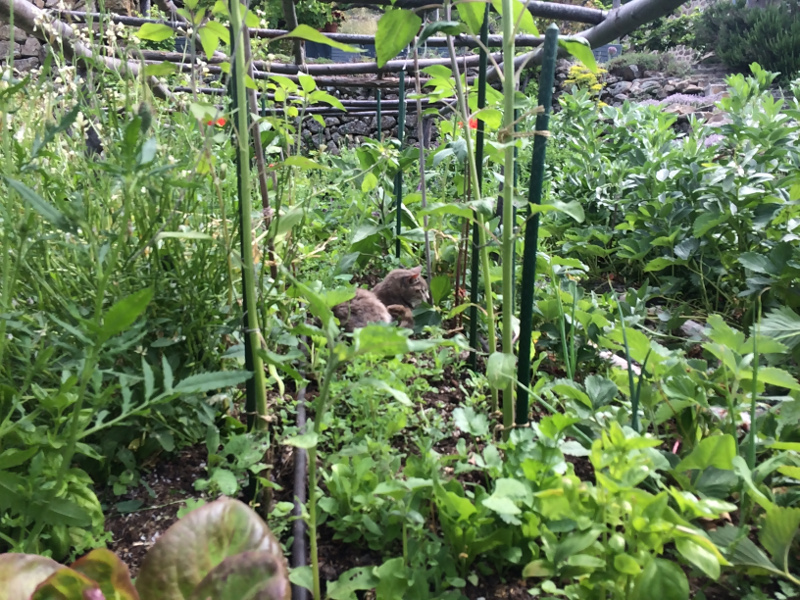 The mole rat lives to fight (and chew the roots) another day.