Two weeks later than any other year, Spring has arrived.

Break out the lawn mower, here comes the growing season.

Actually that reminds me, I need to trickle charge the mower – it hasn’t been used for so long I can’t remember when it last had an outing around these acres.

That is one thing to be said for a long season of drought – no lawn mowing.

But first things first. Flowers for the market. Oh my, that was a struggle. My Thalia daffodils are only just emerging. And I had to really forage to find any open Narcissus Bridal Crown or even February Gold daffs. 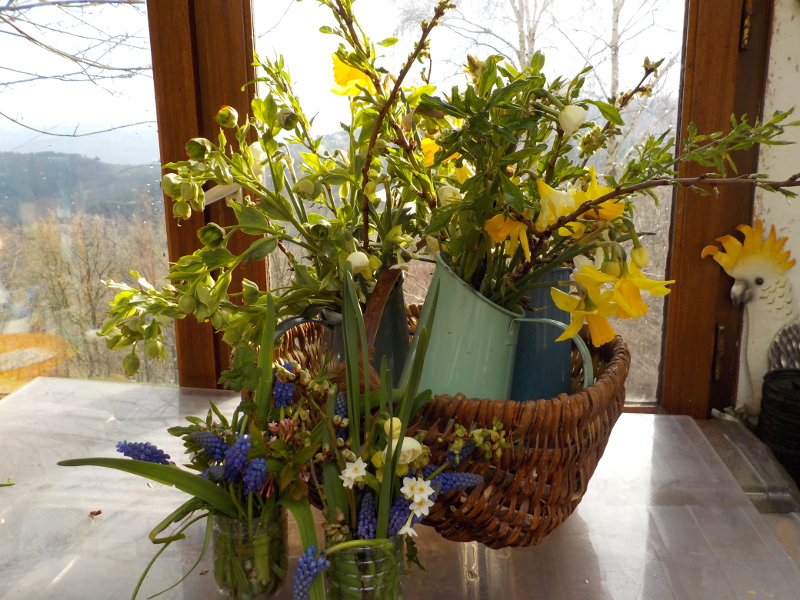 And finding greenery to bulk out the vases was also a challenge. No wild cherries, no apple blossom. I ranged far and wide to get a few stalks in among the flowers.

In the end I just shoved some hellebore foetidissima and hoped they wouldn’t droop too fast. The lovely blue muscari armenicaum (grape hyacinths) are starting to come out. But on shorter stalks. So it was teensy vases for the boulangerie ladies.

My first real trip to the market was a festive one.  A cafe gossip, hot chocolate and catch up with Manou, and Stephane from the restaurant Chataigne et Champignon (Chalencon). 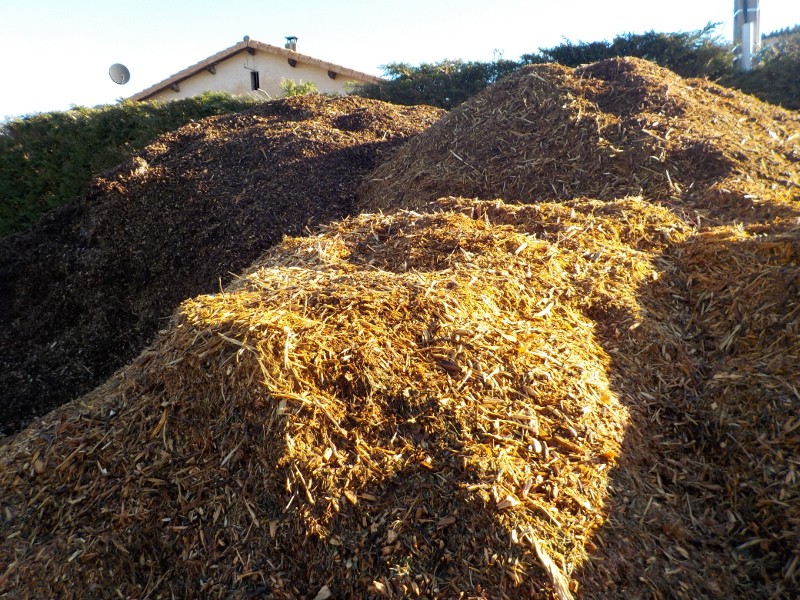 And then best of all…. you didn’t think there would be a blog in spring without a mulch comment did you? … my first real visit to the municipal depot.

I had my bottle of Pastis at the ready to grease the palms of the very friendly council employees.  They were appreciative of the typical Ardèche bribe.

Well, I’m sure it greases the palms of people all over southern France. I find the stuff tastes like the most alcoholic aniseed sweets you could ever imagine. Sort of breath freshener with a big fall over, clear the sinuses kick.

And the men who work at the depot are so friendly I’m sure they would let me loot without gifts. But it felt right. And I was in heaven. 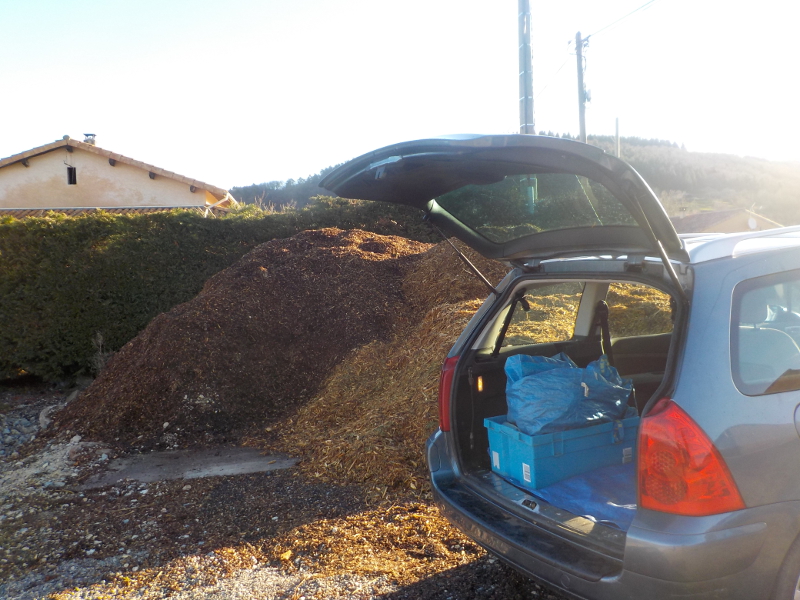 They helped me load the car with the loot and really don’t mind if I become a weekly feature at their mulch pile.

Those Ikea bags are going to be a permanent feature of the car from now until I transfer that mighty stack to my garden.  One bag at a time. Especially the really aged two year old stuff.

But I promise not to bore you with attempts at rendering chippings into artistic poses. It’s a bit like showing off your smalls. This mulch goes on the garden. It’s a wonderful necessary accompaniement. It is not really newsworthy.

But I am so so happy to have found it.  It feels as though I am ready for Spring and the growing season with paths mulched and soil covered and I may even get time to really look after this garden for once. Not just try and play catch up.

And even the village beds I look after get a mulch. I need to head up to town this afternoon for supplies and of course I will visit the depot with my bags. And then I will give half my treasure to the garden bed in front of the church and spread the rest on a cabbage patch.