The barn garden – more gardening on a slope 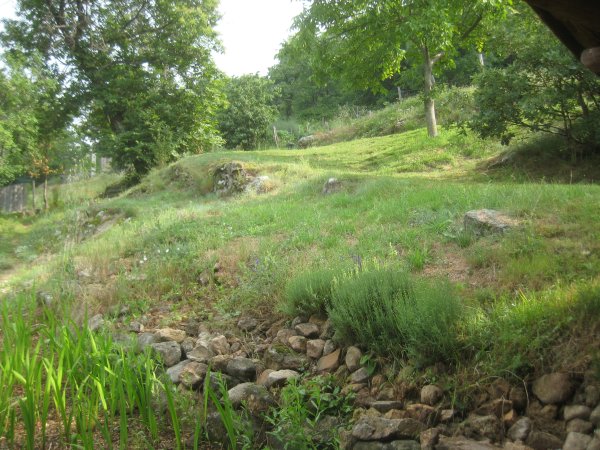 The tricky bit. No one tells you just how hard it is to plant creatively on a slope.

And this garden is seriously sloping. I have some natural walls and obvious full stops. But I swear I have learned how to weed with one leg longer than the other. And teeter on the edge.

I could have just left this a grassy slope. But any chance I have to avoid having to strim (whipper snip) is a day of pain gained.  And I wanted to see some colour here.

So what a relief I have sorted this large part of the garden while I’m still able to scramble up a steep slope. 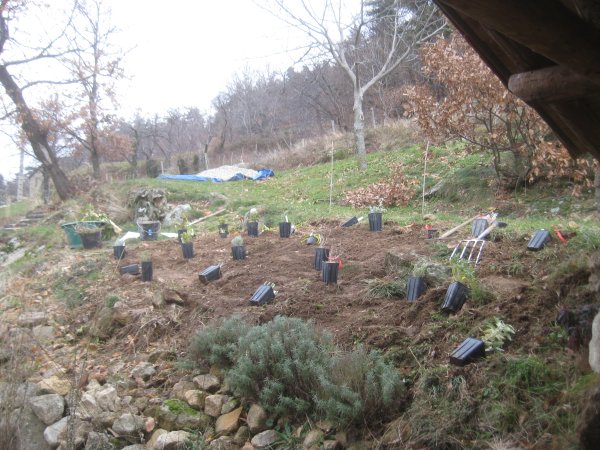 My only guide for what I wanted to plant were the three santolina shrubs given to me by my friend Andrew Wilkie.

You can see them lurking in the lower right hand shot of the picture. I took cuttings and managed to increase my supply of plants in the very first season. 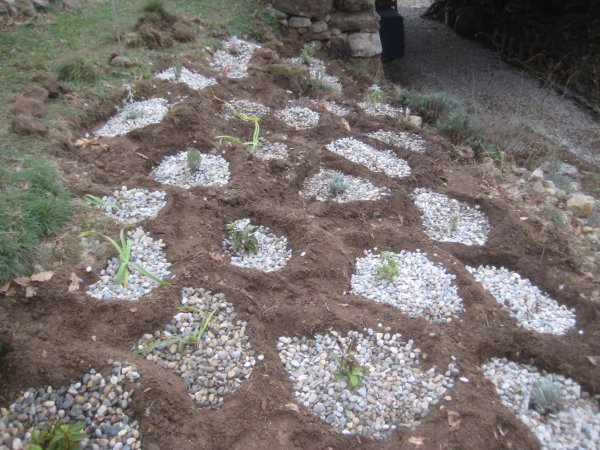 Believe me, it was dumb luck. I’ve never had as much success since. But I keep trying.

Watering was always going to be tricky.  The soil here is incredibly free draining, so any chance I had to establish shrubs was to follow the Filippi method. I have written about this before so sorry if I am a watering bore.

But here are the little teensy plants placed out one winter.  I dug quite shallow bowls and planted them into the rather good looking earth. That was a revelation. It was only grass for decades.  But the topsoil makes its way down the slopes over time.  But I needed these roots to go as deeply as possible if they were to thrive. 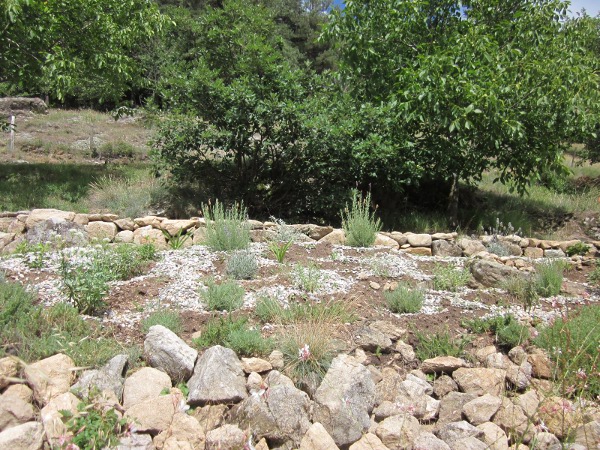 The plants were so small and insignificant, I had to dress each shallow bowl with gravel just so I wouldn’t step on them over the growing season.  Pour over two buckets of water every two weeks for every plant. And wait for them to grow.  It looked like a bomb crater on the moon for a few months. 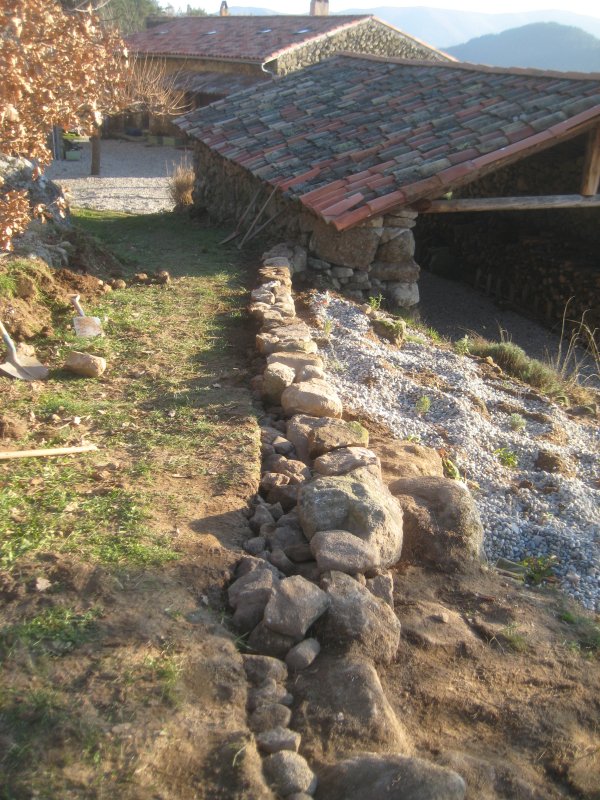 And I had to weed carefully in between the little critters. On a slope. 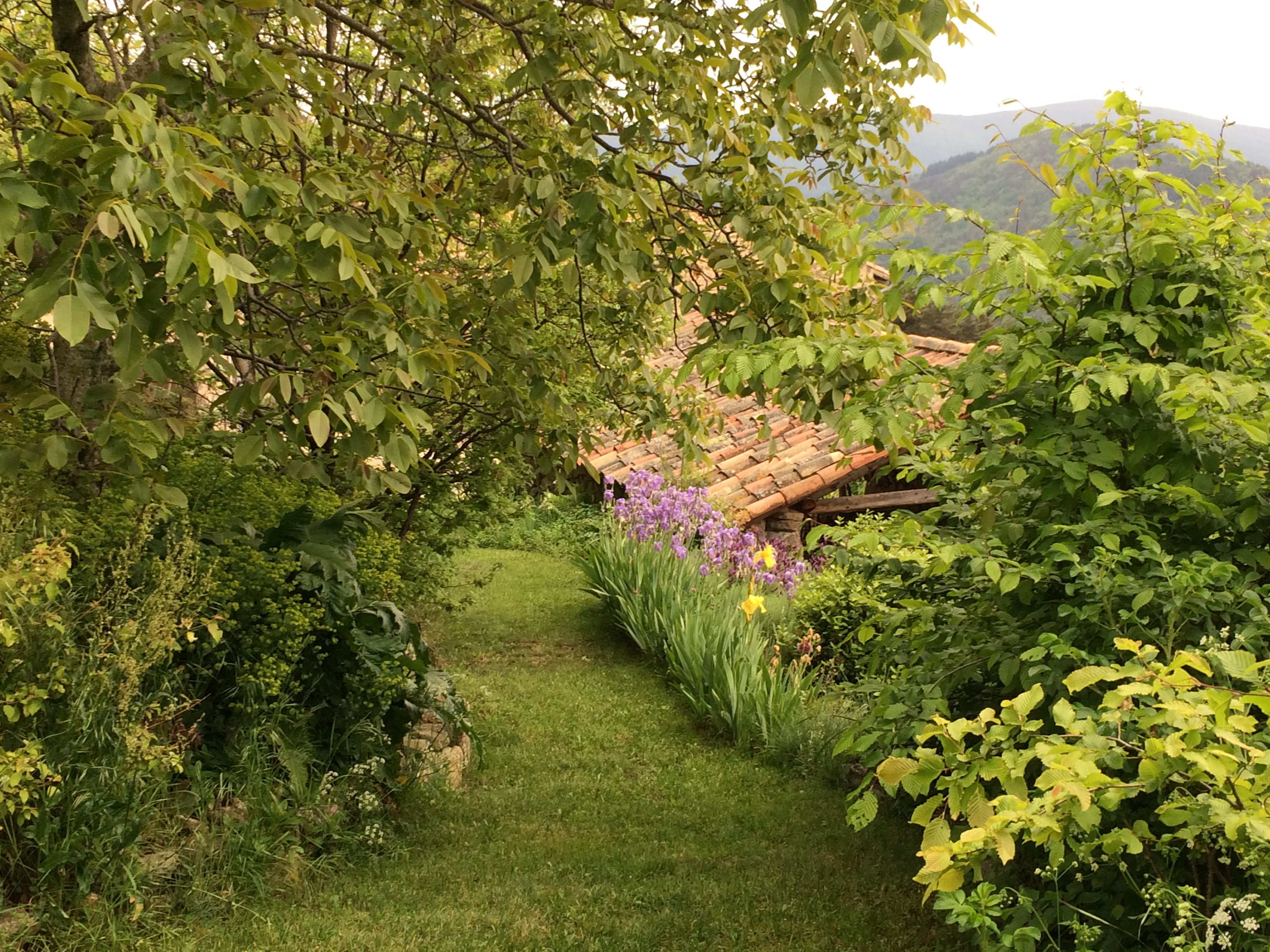 And I would have to say that the most important thing I learned about this planting lark is to give it another year.  Things do get better every year. It has taken three years to get this garden to the filled out happy place it is now.

But for two long seasons it looked a bit of a sad experiment. 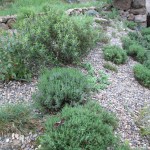 Luckily I had distractions in coaxing the wall builder to give me a low wall at the top of this barn garden bed.  That provided me with a visual line. And I decided to put in a long line of irises at the top of the bed to repeat the pattern.

I know most people plant in threes and fives. Or blocks.  But I have found lines on this long skinny garden can be quite fun. It certainly isn’t what you expect. 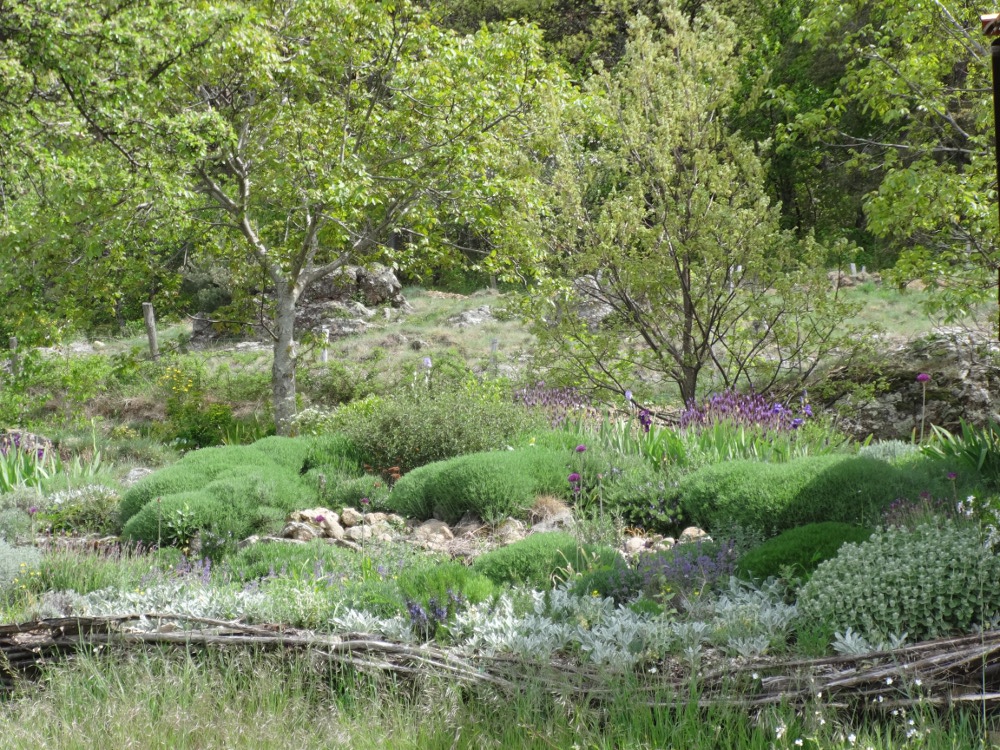 As the plants slowly put on a bit of girth, I shovelled bucket loads of gravel around each plant. It kept down weeds a bit (not as much as my wood mulch) and made a nice contrast with the green.

And standing on the lawn and looking up the mountain, I was relieved that the plants didn’t look out of place in the landscape. 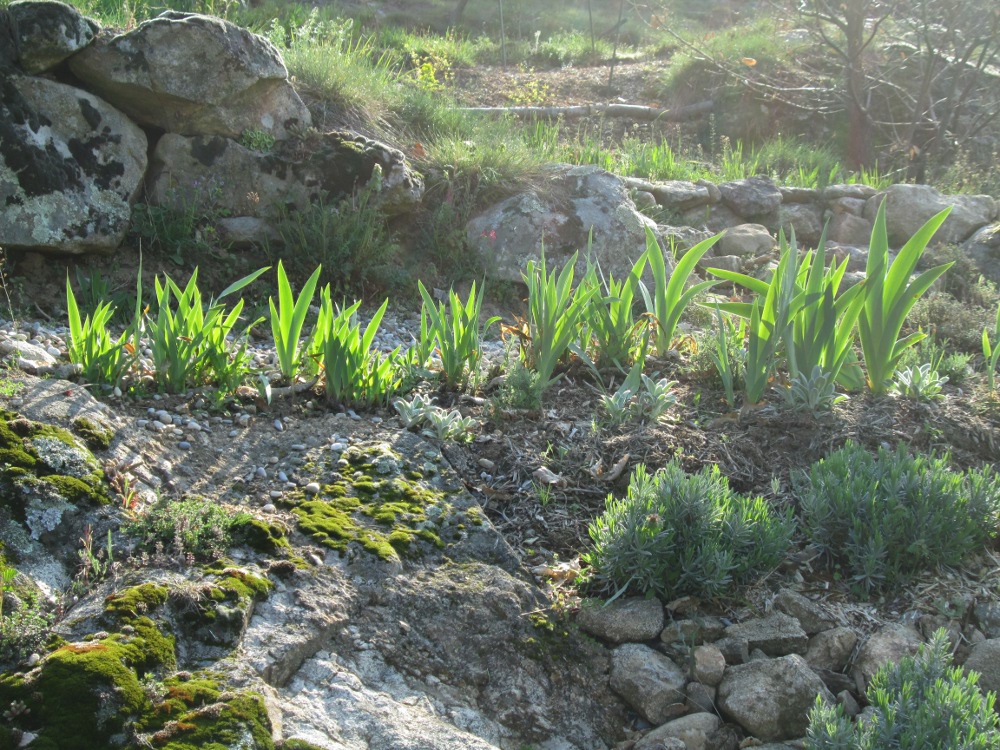 I kept the colour scheme strictly green, purple, grey and blue. With Allium purple sensations to lift everything in the spring.  Prostrate rosemaries work, so too do sedums which I prefer when they are green.  The irises don’t count for colour as they flower so fleetingly.  And I much prefer the upright spikes of their leaves than their rather frankly absurd flowers. 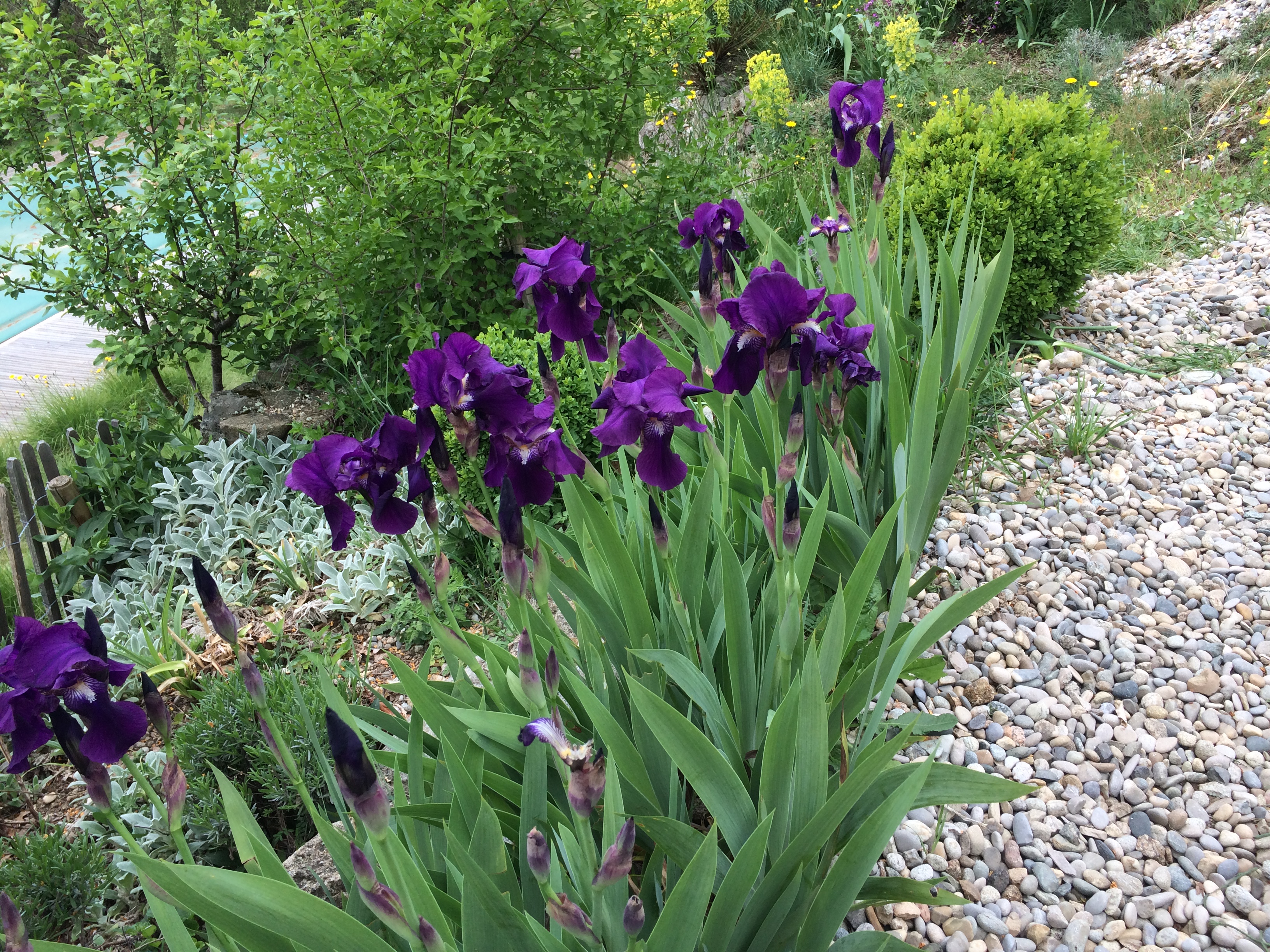 I made a big mistake in the second year; I forgot to prune back the santolinas in good time. The poor plants flopped. 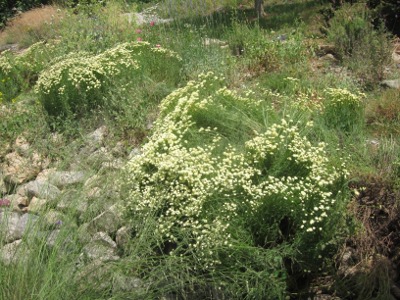 And I thought I had lost them. And boy do they look dreadful straight after their radical hair cut.

But if you want these shrubs to delight longer than May or June (spring), then you need to decide whether or not to sacrifice the flowers. 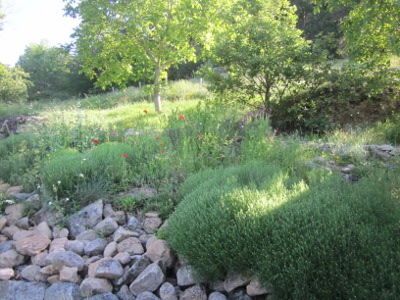 I compromise by keeping a few flowers on each plant. That gives me the pleasing bobble of pale yellow in among the green.   But it’s not really by design. I always leave a few accidently behind when I’m perched on the slope and trying not to crush any plant. 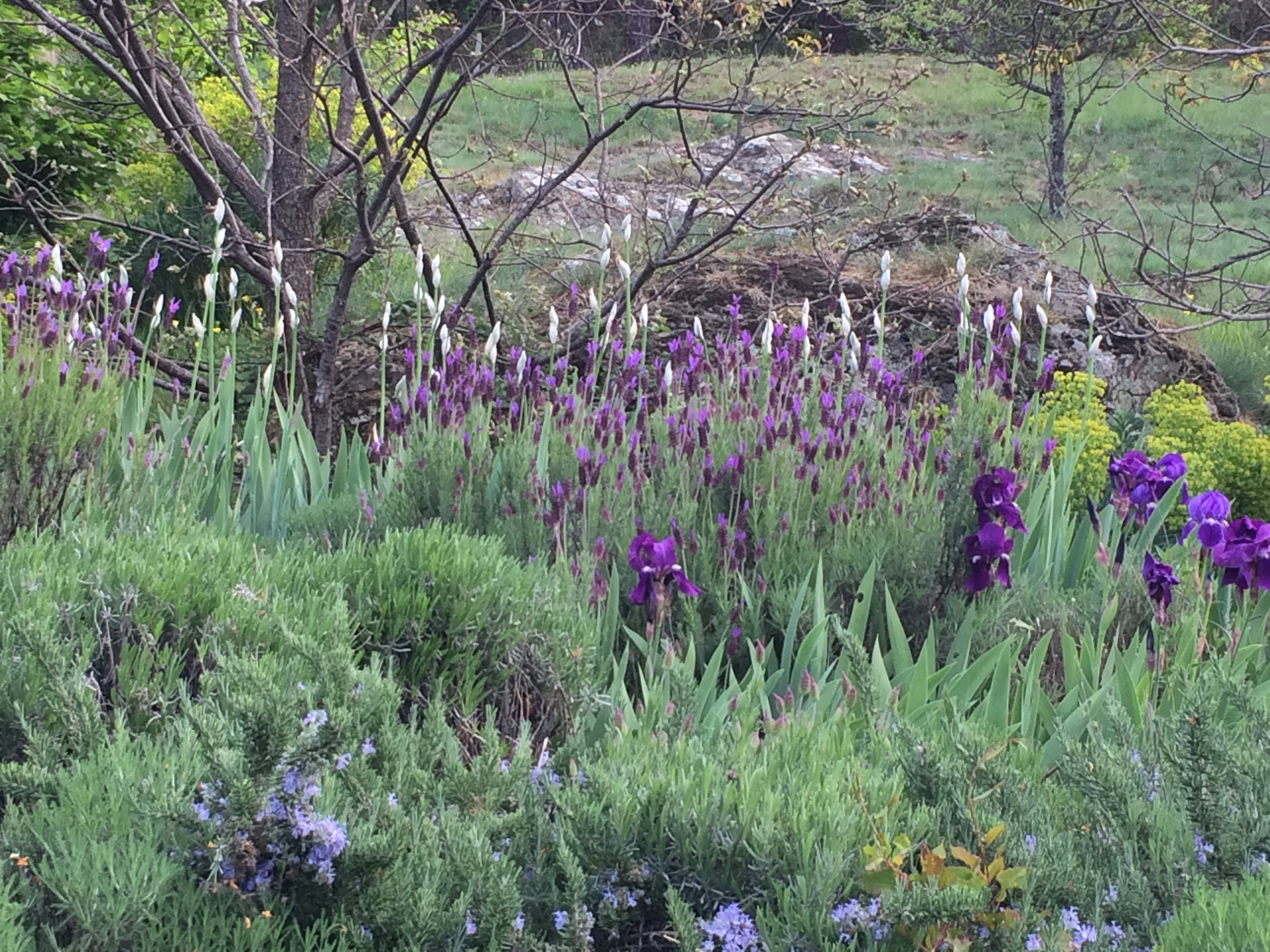 This year I realised that I had finally achieved what I set out to do three years ago.

The plants have all filled out. There is barely any room to step between them. And the delight lasts longer than early spring.

I do have the stunning deep purple of the lavender stoechas in spring. But they fade and then the other lavenders kick in.  I can expect to have colour here over the hot summer with the lavenders and nepetas, and when they fade, the blue of the Caryopteris will appear late August and into September. 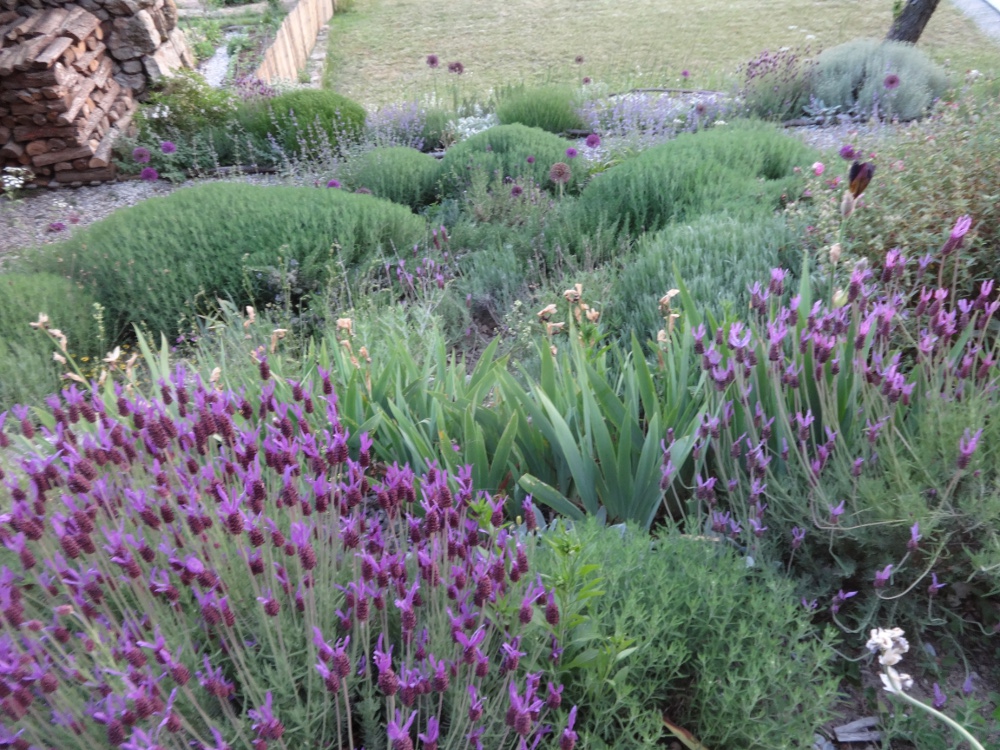 If I get round to planting more nerines next year, I will have colour among the strong greys and greens almost until the beginning of winter.

And remember, that’s very little weeding, and absolutely no watering. 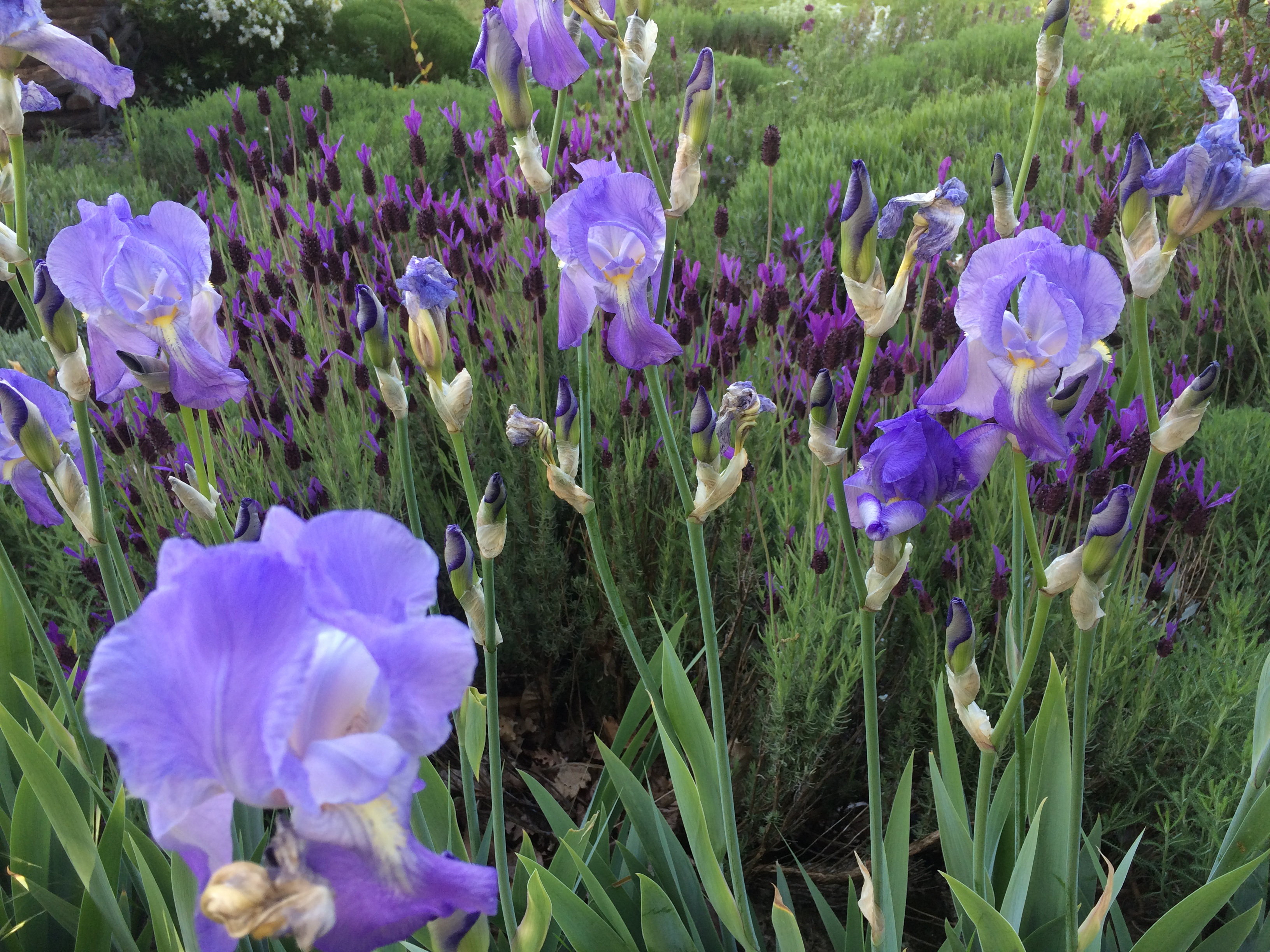 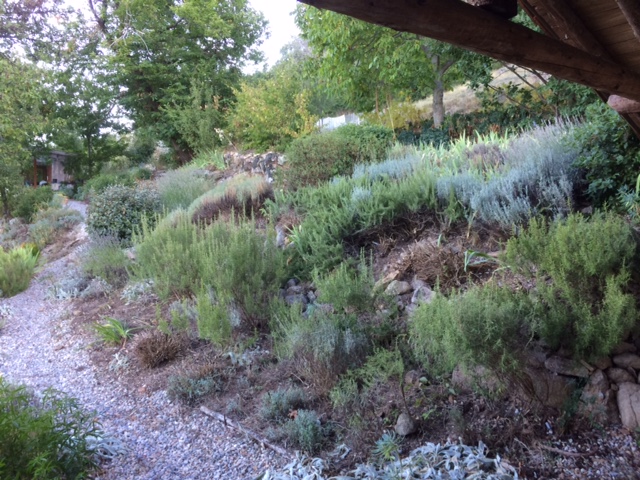 I was going to be a drama queen and announce that this garden has changed utterly. But it has suffered.  I will be honest and say that I didn’t prune well in the first years. I was so pleased with how well the garden was filling out that I forgot to keep things in check.

Cistus? It’s a brute. It crowded out the lavenders beside it. And the viburnum tinus, which I love, are huge.  They too crowded a huge number of iris I planted close by.

And those cheap rosemaries of the prostrate variety I bought for a song in the supermarket? They have romped away.  Swallowing santolinas in their path.

So in 2016 I had to cut back hard and bite back my regret at not doing it sooner.

And in 2017 I was forced to cut back more as so many plants died. 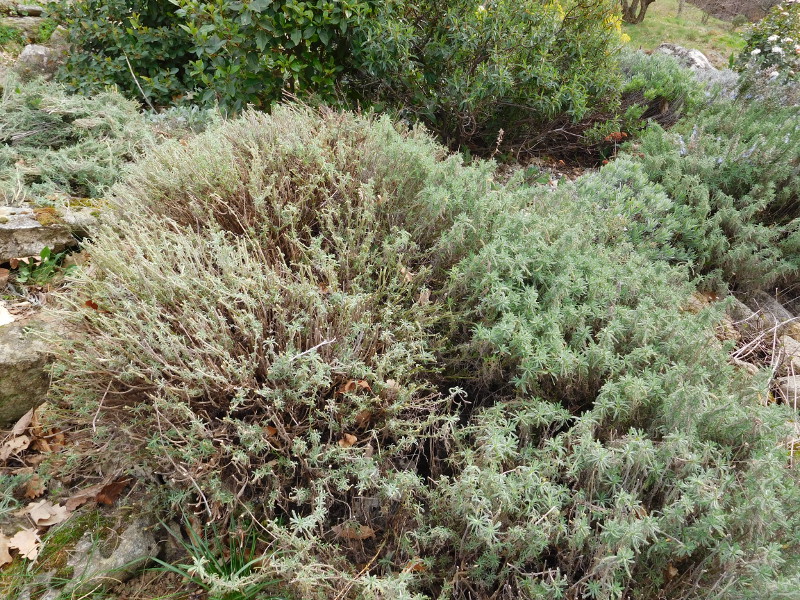 Yes. The great Drought of 2017. A bit like the Flood of 2013. There is always something fun going on in a garden to make you change and suffer.

The rain fell in June. And then not a drop fell until November.

The rosemaries were fine. 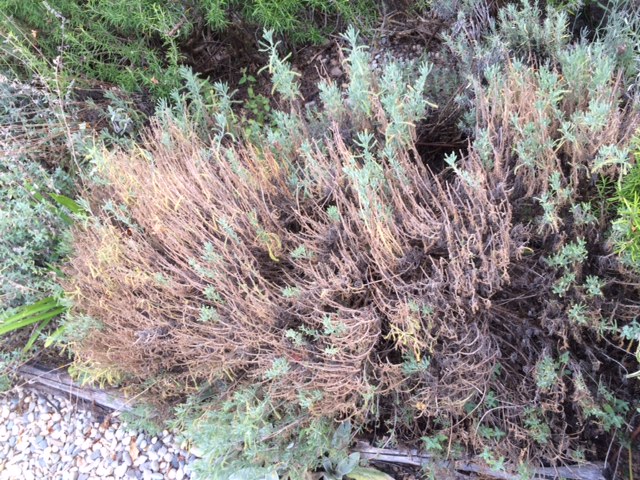 That is the one challenge with cloning. Remember I took cuttings from the parent plants at the same time. So all my wonderful cotton lavender shrubs were the same age. And under the stress of heat and drought they did the sensible thing. Lost all their leaves and looked dead. 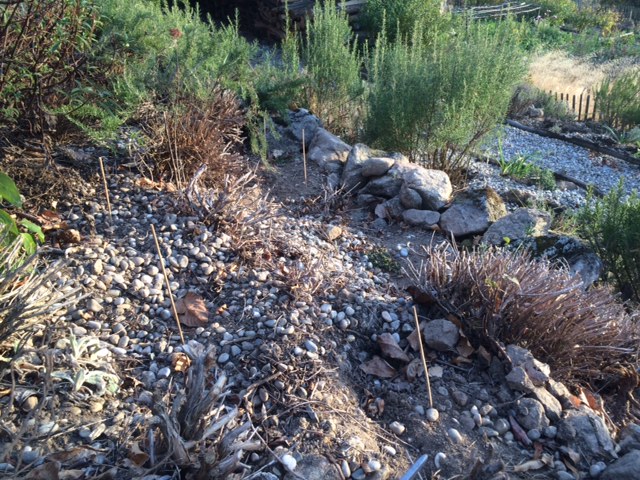 I cut back as hard as I could without weeping. And waited it out.  ‘They will re-grow’ I was promised.

(Under each stick is an eremus bulb.)

Here is their last shot in June before the calamity. 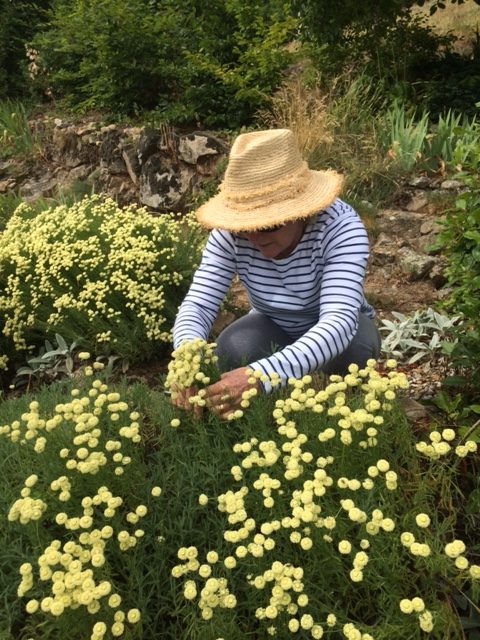 And mercy me, some have.  But not before I decided that the whole beds on the level part of this garden needed a re-design. 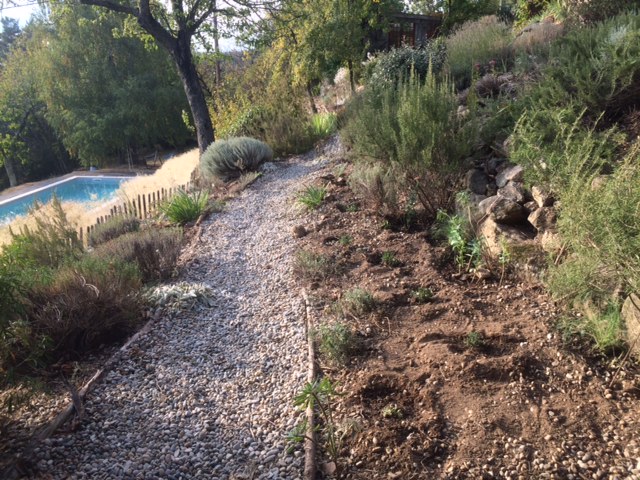 Out came the lavenders which I never liked. Out came rosemaries which were way too thuggish.  Farewell santolinas. They were reduced by half. 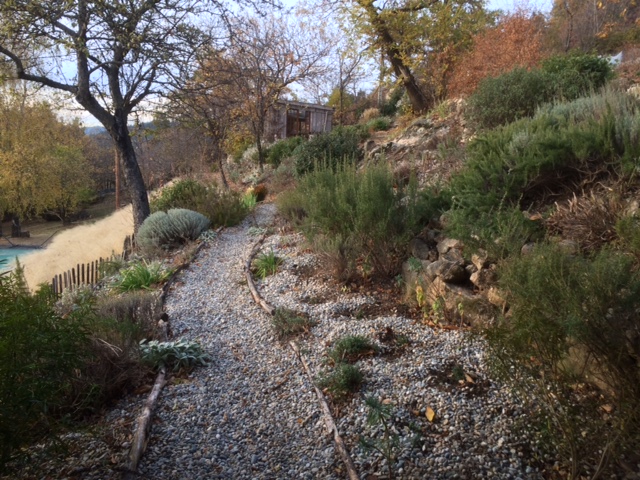 And in went some newly ordered fresh plants  some hyssop, leftovers from the dry garden planting, transplanted Pistacia lentis, a choysia Aztec Pearl to balance out the one growing on the other side of the path. 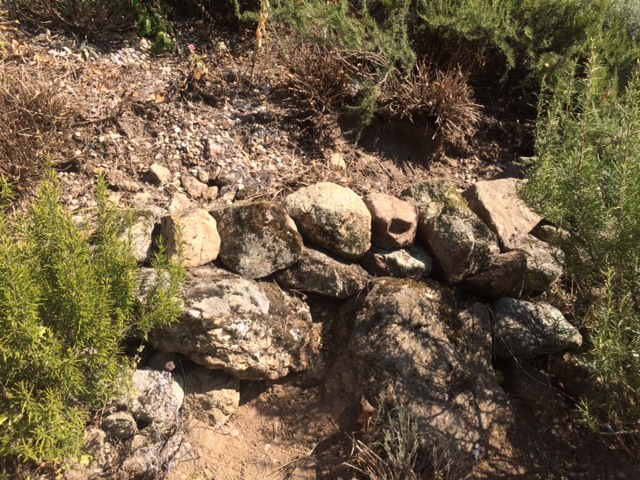 I was forced too, to sort out the wall which has been happily hidden under a sea of santolina. It has smartened up.

So let’s see what 2018 brings. Growth I hope. Less lamenting.

And just to cheer ourselves up, have a few memories of the garden when it was thriving. It cheers me up no end.

« Levelling soil » The barn garden – gardening on a slope