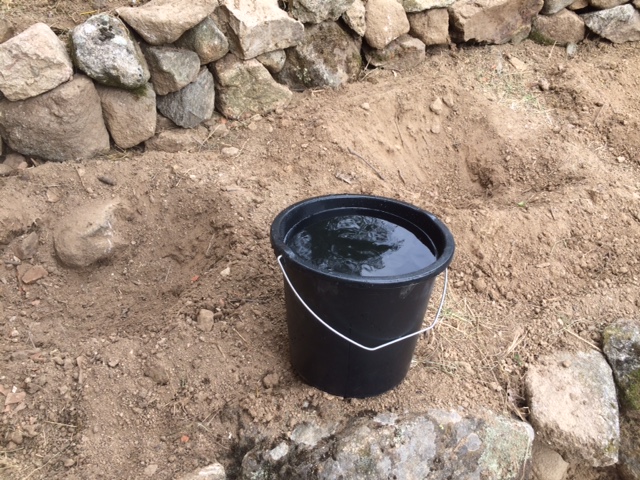 I’m not going to manage an elegant and photogenic story today.  You will see dirt. You will see wet soil.  It won’t be pretty. (At least I have a shiny new bucket rather than one of my old grubby ones. Sartorial elegance in some things.)

But then if you are mad enough to be planting young live creatures into soil in the middle of summer. In a climate that is more heatwave then heat. Then this is what you get.

But I couldn’t resist.

These lavender grosso plants were taken as cuttings in early spring. And they grew and grew and I need to put them somewhere apart from in pots in the potting shed. Where constant fussing is required.

So now that my walls are built in the guesthouse garden (yay), I can get away with some minor planting up.

Here’s the technique. And note there is no addition of soil improver, compost, fertilizer, or any nice gentle things. This is rough garden soil that has been compacted and crushed under the weight of heavy rocks and stones for ages. 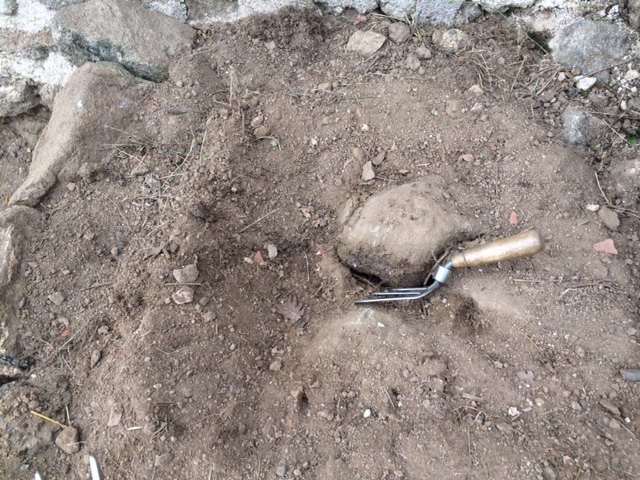 I’m going for untouched for a few hundred years. The only thing I did was to remove the largest of the boulders and some of the rocks.  One I’ve actually left as I couldn’t shift it and will have to let the roots of the lavender find a way under and around it. 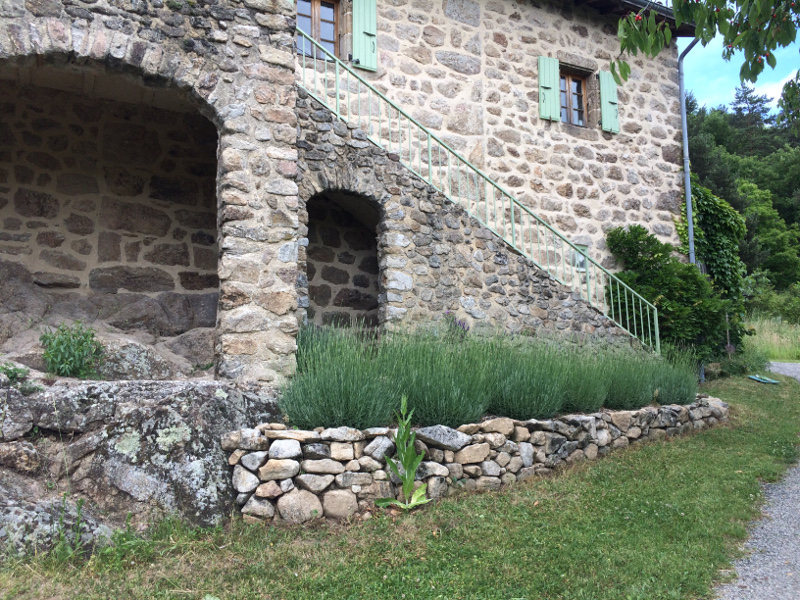 Each plant is spaced a metre apart. Three feet. And that feels very spaced, but it you look at the lavenders of the same type in the step garden, you can see that they are already touching in their second year with a generous planting distance.

So getting it right now is best. And I will infill with easy to remove irises next month just to have something to look at rather than spindly plants. 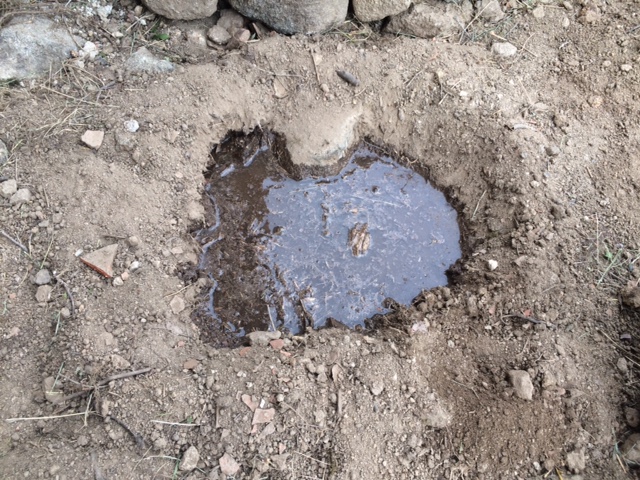 I dug the holes (and removed the rocks).

And I made sure I had a deep shallow basin.  The way to test how good this basin of a planting hole is to do what you need to do every fortnight or every week.

You need to be able to pour an entire bucket of water into the hole and not have it spill. The point of this sort of watering is that the roots have to seek out the water deeply.  So you could say that each plant requires a bucket of water every week. But think you can get away with just a weak hose of the same amount of water slowly poured over the plant. 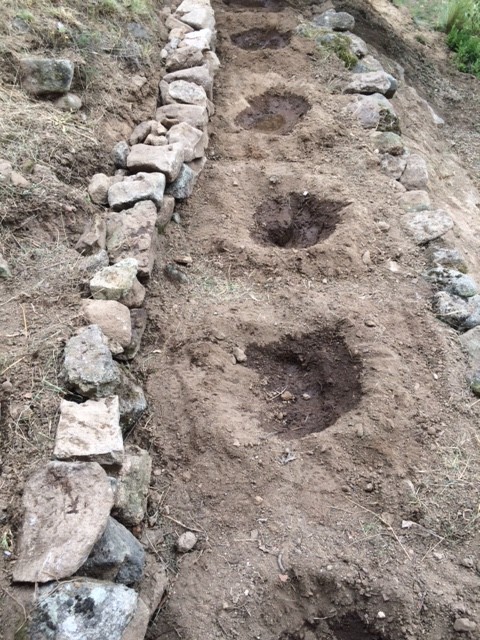 It doesn’t work.  A huge gush of water has to go into the earth and sink without a trace and the plant has to go hunting for it way below its depth.  You are aiming to eliminate surface roots which require constant watering.  (Goodness I’m bossy, I’m on my second cup of coffee. Alarm bells!) 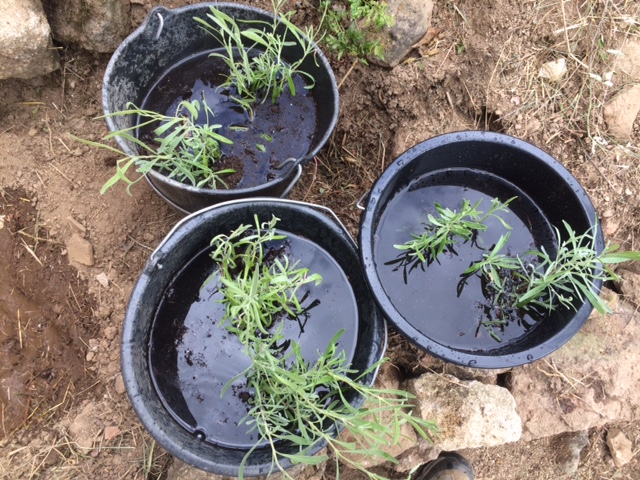 So each of these planting holes gets a good bucket of water.

Then I place the plants into a bucket of water for about ten minutes for a good soak.

You aren’t hanging about for this. Generally I find that I’m digging holes, checking the depth is enough to hold the water and moving onto the next one while the plants soak. 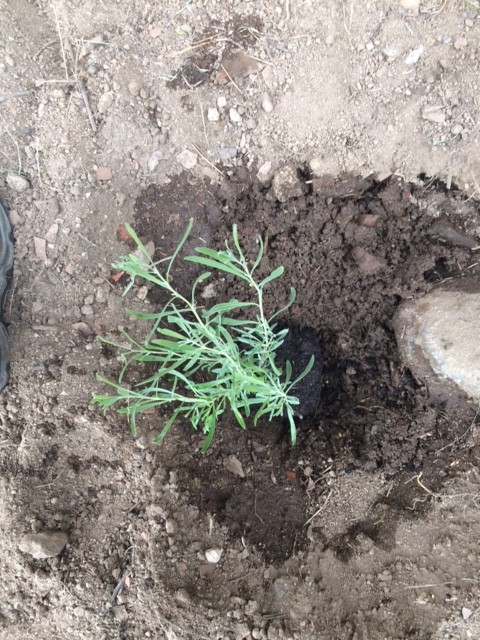 Then each plant goes into a hole. And another bucket of water goes in with them to settle them in.

Once that has soaked away, firm each plant in well.

Now all you need is a good mulch around the plants so you don’t waste time weeding. And as it’s so hot, I’ll be doing a bucket of water each week for every plant. 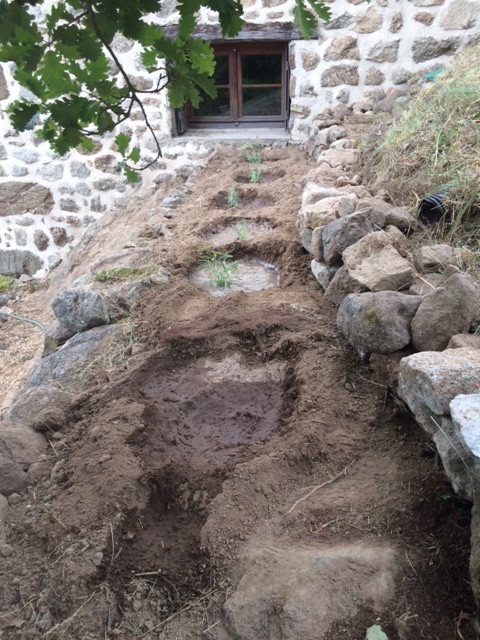 If I did this properly in autumn, I’d only need to do this once a fortnight. And the good news is that after about nine months, the plant never needs watering again.

Which is a marvellous thing as this slope is incredibly steep and I’m tired of crouching like a mountain goat while I plant.

Ooh, if you look at this picture you can see that I wanted to plant six lavenders a metre apart. But when I hit hole number six I also hit rock. The mountain. No shifting that. And it’s a great test – if you can’t dig a basin deep enough to hold a bucket of water there is no point planting anything. The lavender just won’t thrive. 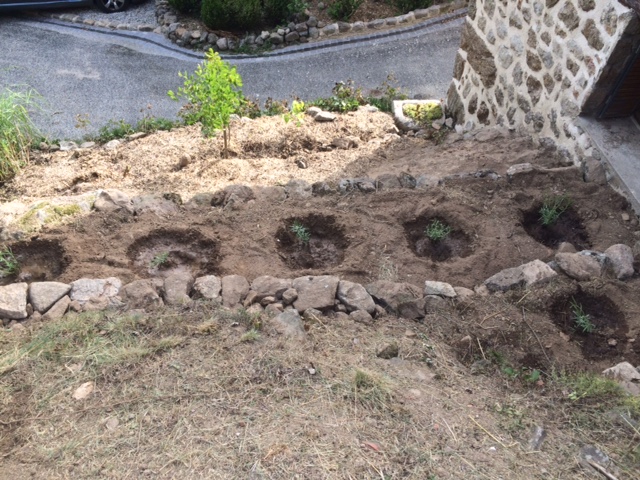 So five in a long row it will have to be. I put the sixth in the next terrace up.

Now let me have a rummage in my photo folder for a better shot of the same lavenders growing in front of the house. You need encouragement that this technique really, really works. 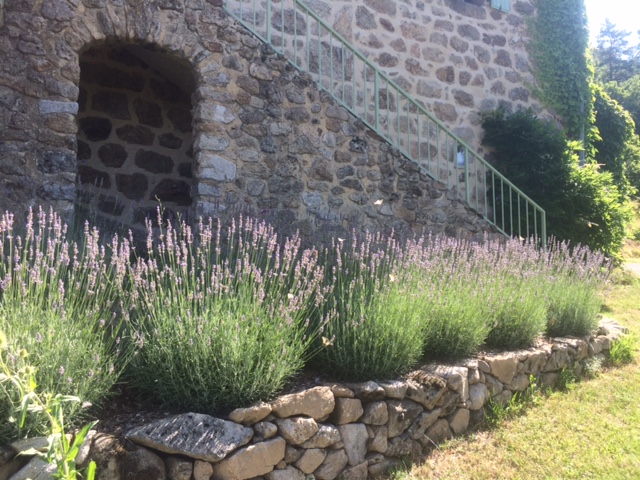 Now on with the mulching.