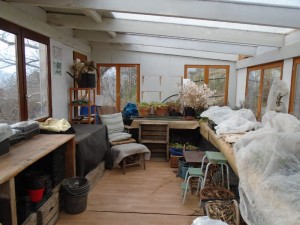 The fleeces come off and the potting shed is open for business. I did do a bit of sowing before I left for London.  The garlic is up; well half of them.  And I can see there was a problem with the germination of the extra broad beans I sowed. 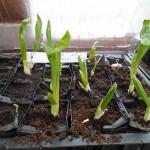 If Artur was asked to incubate seeds I’d have a success.  He just loves sitting on them. Or should I say snoozing on them.  So I have to remember to put clear plastic lids over every tray I fill in the next few weeks. The cat has form.

And he didn’t look particularly contrite. But he was pleased to see me in his potting shed. 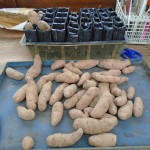 I bought out my sacks of goodies and he was most interested.  I have two kilogrammes of Charlotte seed potatoes. And two kilos of Pink Fir Apple potatoes.

Yes, strange name but they are the most nutty and delicious spuds. But they will only do well here in a good wet summer.  Like last year’s one.

I grew the Pink Fir Apples in the first year we moved here and had a bumper crop.  And I foolishly believed that growing potatoes in this climate was a doddle.  Especially Scottish varieties. 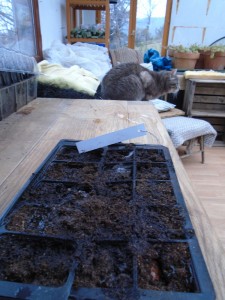 And it has been a dismal failure ever since.  Actually I gave up trying. Most years I have just grown Charlottes.  First earlies, up and over by early summer.

But I have decided to try again.

They are in trays in a bit of bright light. And chitting.  Getting them into early growth.  But actually I’m not sure I need to chit at all.  It’s just an excuse to get the gardening season started.

« The first daffodils of spring » Cutting back the eragrostis grasses