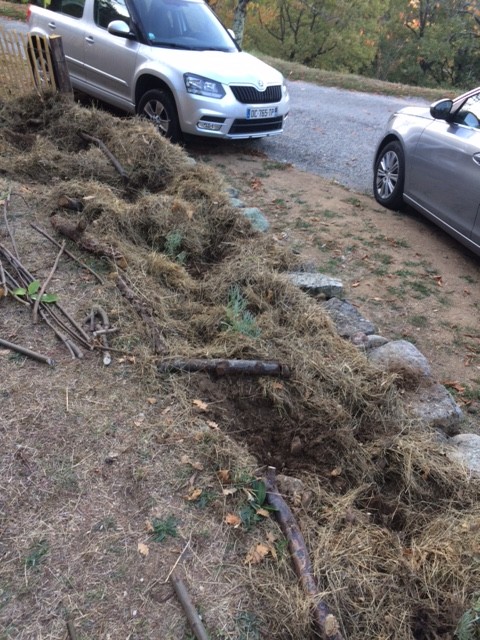 I was standing in the main square at the market on Thursday chatting with Nicolas. How’s the new garden going? He asked. Garden? It’s a wildlife playground, not a garden, I replied.

Well, that will teach you not to fence the whole area first before you even thought of putting in a single plant.

And he’s right. Planting anything in a garden that is so open to nature is a risky business. 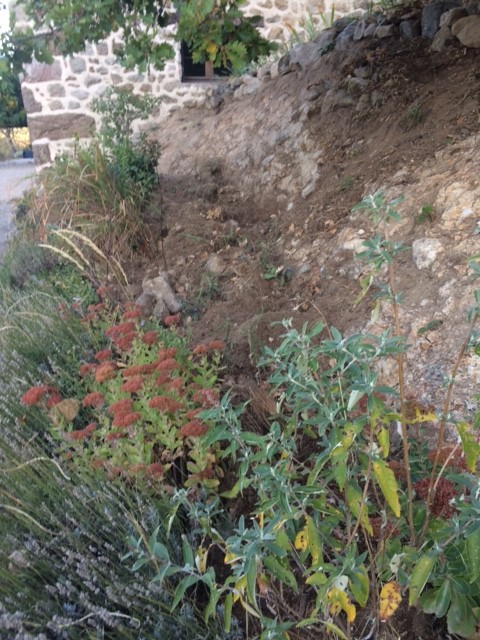 I only had one ear to his laughing comment about my wildlife dramas. We were all standing about watching a double truck which had roared up the deviation road in the middle of the town getting stuck on the first turning.

It was sawing and revving and trying to reverse while all the shoppers at the market stopped to watch. Poor driver.

But back to my woes.  I just never counted on this drought (still going in case you are wondering) having an effect on my schemes.

Not only do I have to worry about wild boar, the usual enemy. But badgers. 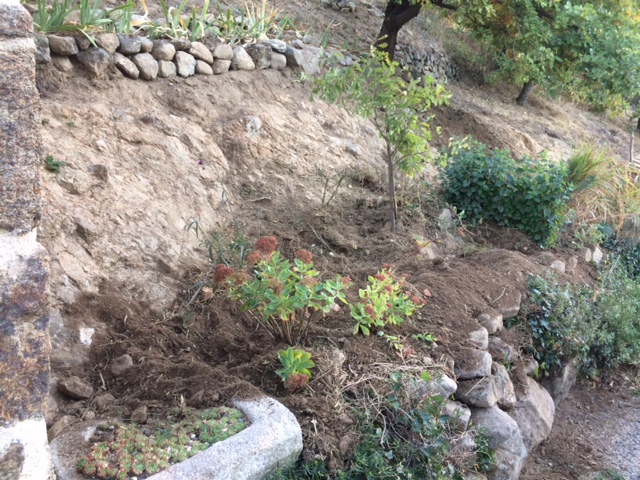 Or maybe badger. I didn’t put the camera up to see what was moving about our farm at night.

But a quick online check of animal droppings and here it is. Click on it only if you are really keen. 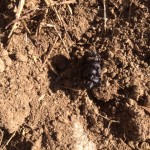 But Thursday morning I went outdoors to put the flowers in the car and saw so much devastation I yelped with shock.

At least thirty plants in the main garden, all the lavenders in the guesthouse garden; four sage plants and half of the just transplanted verbena bonariensis. Oh and the phlomis. 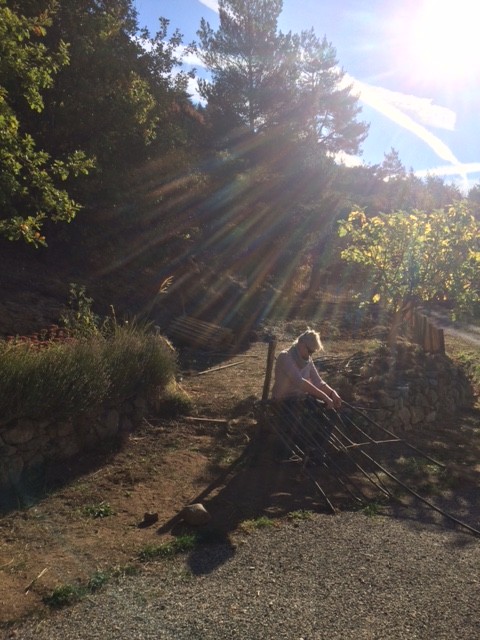 The poor badger is so hungry it is digging up so much of the garden in search of food. And what a shame for me that all those lovely new plants I put in are in the way.

It was a real treasure hunt trying to find the plants which had been flung aside while the badger went in search of grubs.  I could have saved him the trouble and explained that in all the 60 feet of this newly dug garden, I found only two. 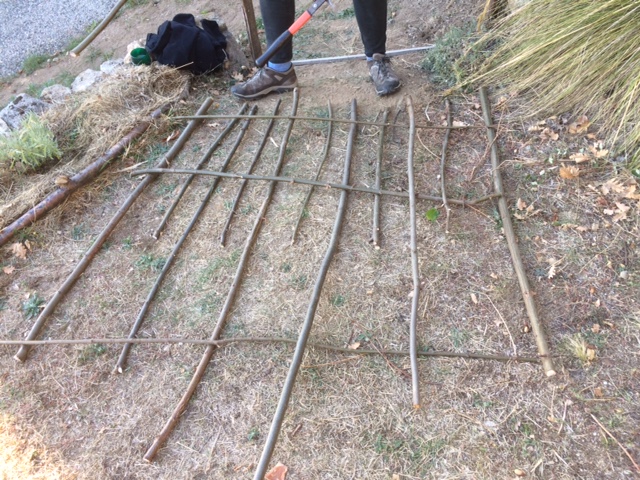 Sighing mightily I have put back as much as I can.  The guesthouse garden is worse. So much soil was shifted as the badger came from the top of the steep slope and brought down half of my landscaping as he worked his way down. 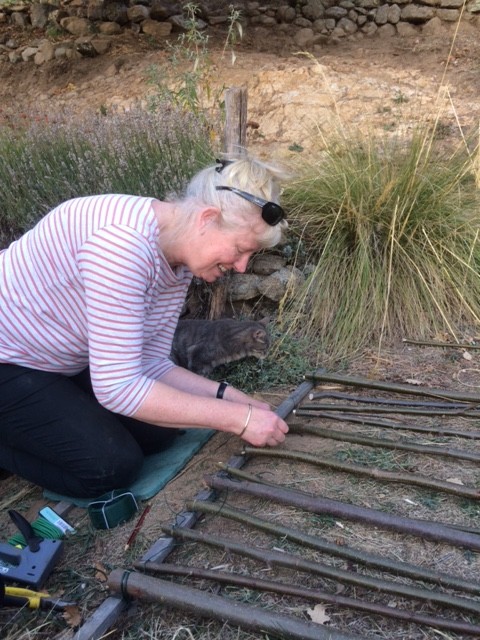 But I can’t fix it neatly until I have kept the badgers out. 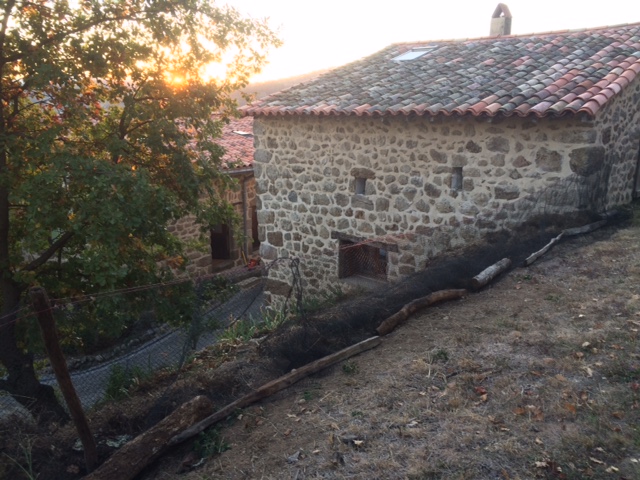 Gillie made my lovely gate. And I unearthed all my netting and have put up a temporary and very long fence. Secured with hefty chestnut logs at the base. 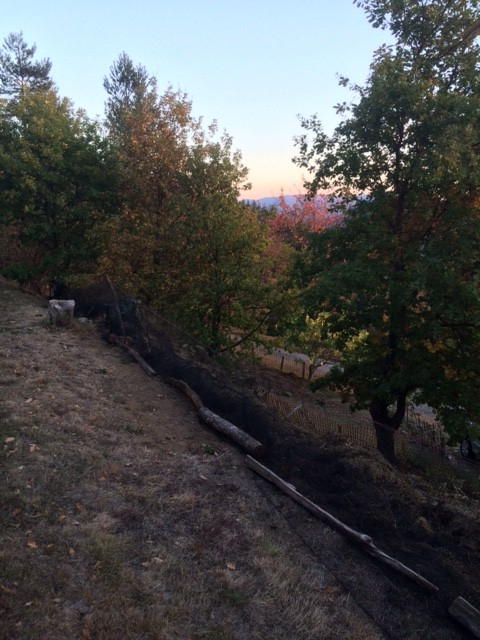 It may not last. But it will have to do for now.

I have picked up ten more metres of the only fencing that keeps animals out – chestnut slats wired into a stiff roll. 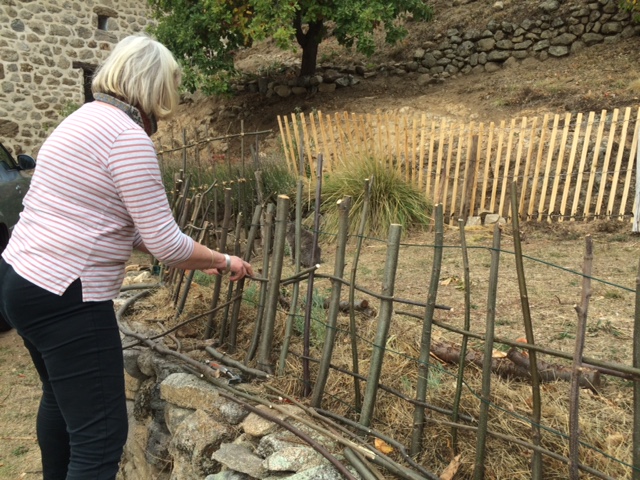 And I’ve ordered ten more. I will have to pick it up next month when I have some funds.

But I paced it out and realize that I need to put up 34 metres of the stuff (and it’s not cheap) to keep the garden secure. 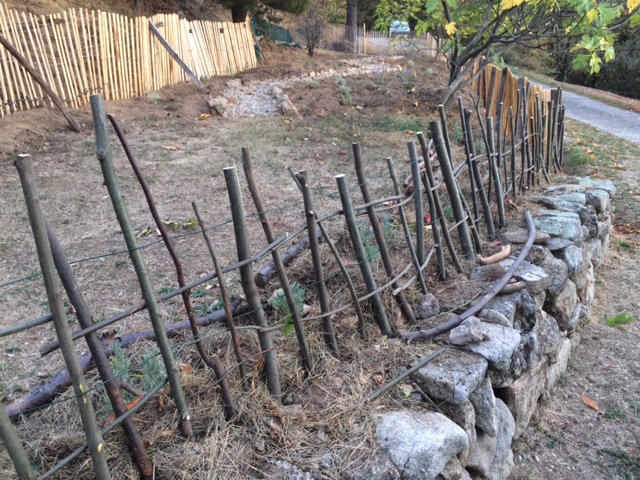 Nicolas suggested putting the fence at the very top of the terrace so it is more discreet.  But for now with willing helpers I have a temporary solution. Not pretty. But pretty secure is what I’m hoping for.

And this low little one is going to have to stay in place until the lavenders grow up and for a dense hedge.  So one more year at least.

« Tree felling » Autumn in the potager