There is a particular noise that the dishwasher makes on the eco cycle. It’s a sort of whiny meow and I immediately think that Artur might be outside. It is a similar bleat.

He isn’t. And I don’t want to alarm anyone, but I haven’t seen him for two days.  Admittedly it hasn’t been sunny. And Jean Daniel did have house guests this weekend, which did mean there was a warm fire for him to enjoy.  But not seeing his fluffy form on the swimming pool cover of a morning (a particularly good warm spot) makes me breathe in sharply and look around.

Where is he?  I will go and visit my neighbour tomorrow morning if I don’t spot him.  I can’t go three days without my fix of cat.

And the last time I saw him he was lying like this in the garden. 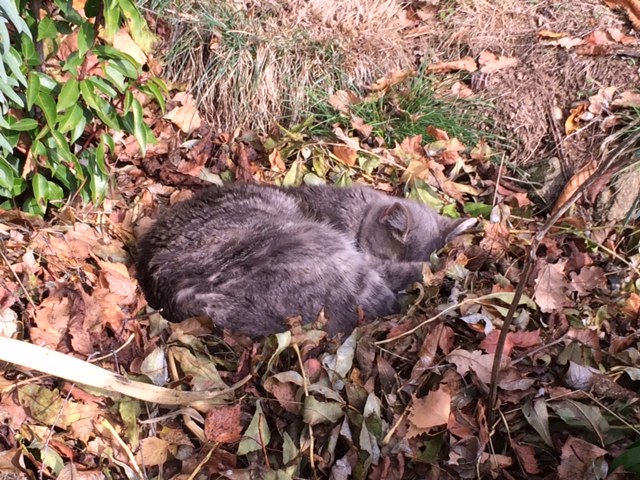 What if a raptor swooped down and fetched him off?

I had just added a pile of leaves to the shade garden to act as a good winter mulch.  And it did look rather soft and inviting. 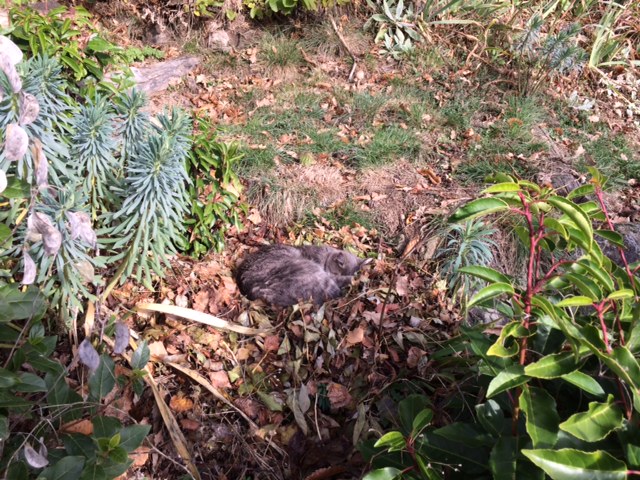 But it was out in the open somewhat. Under a chestnut tree which is gradually losing its leaves.

I won’t panic yet. And I promise to give you an update if and when the elderly critter returns. 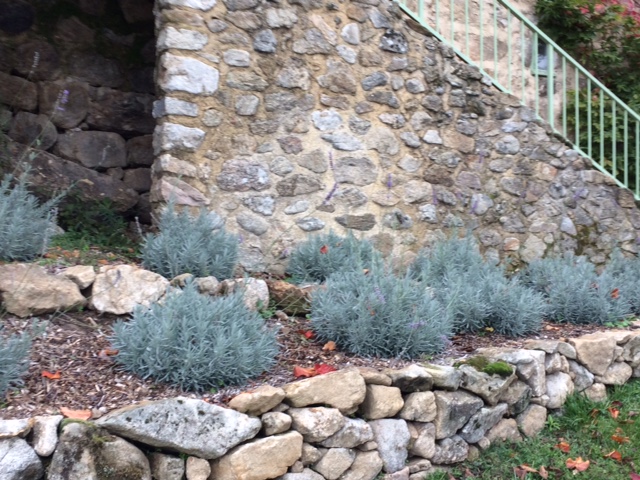 To distract you. And me. Let’s move on to the thrilling topic of lavenders.  Boy do I reek.  I’ve been doing the annual cutting back of this trusty mediterranean shrub.

It’s easy on the new plants.  The ones here in the step garden below the house have become perfectly tamed round balls of shrubbery in no time. 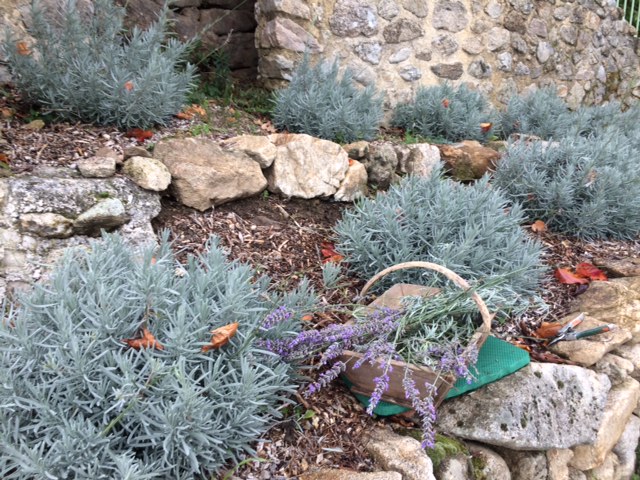 The only strange thing about them was they had so many flowers on. In November.  These shrubs are supposed to flower from July to August and then fade.

Instead I still have some rather handsome purple flowers.  But I cut them back. Sorry bees.  And have plonked them in a basket ready for stripping.  If I can stand the lavender reek on my fingers when I do the deed. 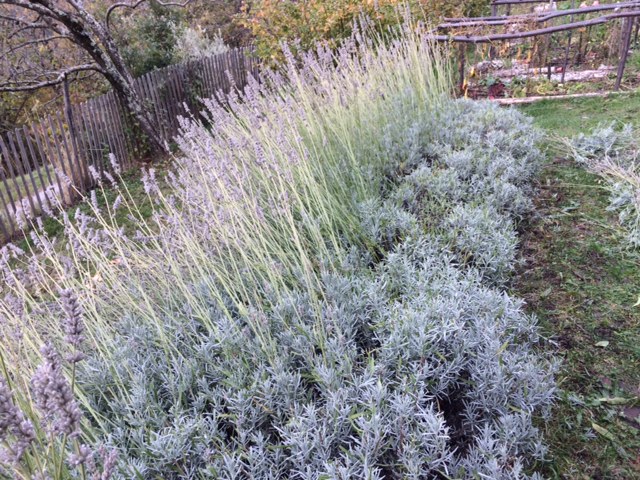 I was more ruthless with my very large bank of lavenders.  Not much is clinging on here. Just the rather stiff stalks of flower head and way too much growth.  If I had my time again, I would have trusted to the final promised size of these plants and spaced them further apart. 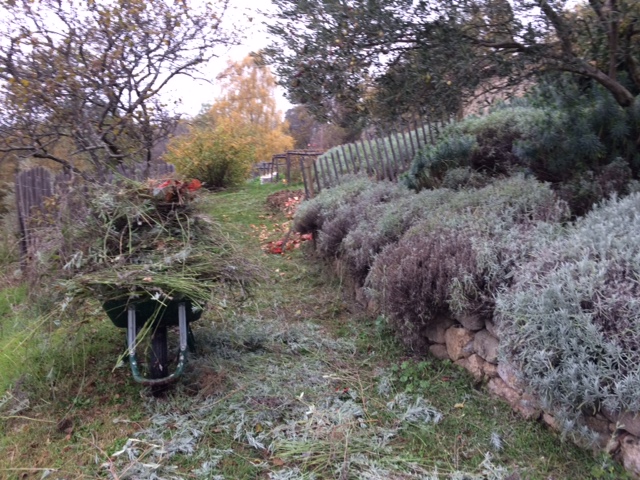 As it is, I have a thicket.  And a quite unruly one at that.  If you are pondering a hedge or even a garden of lavenders, heed my spacing here in the newest of my lavender beds.  Less will be more.

They say you should never cut into the dead wood of the lavender and it’s true. But these shrubs easily turn into a half dead thing if you don’t give them room.  I have a double row of lavenders. Goodness only knows how many plants I put into this space. I seem to recall the magic number of 44. But don’t want to delve back into the archives to check. 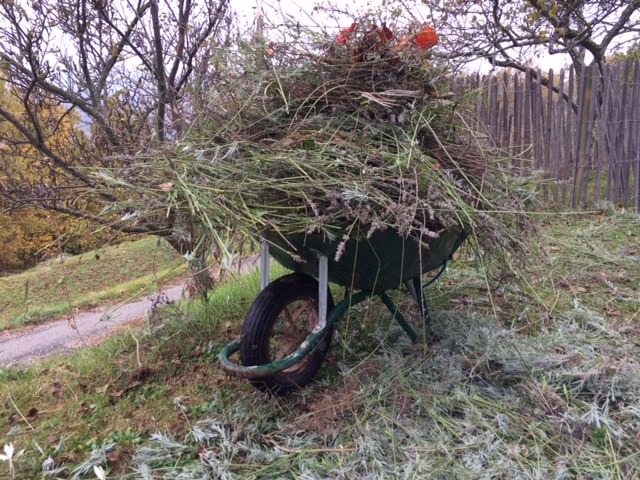 And this is the annual volume of plant you have to cut back each autumn. And for me multiply by five. I took five teetering piles to the new compost bin at the end of the parking area (it’s way too much for my usual potager compost bins).  And I have only done the main bank.

Tomorrow, once I walk back from town – taking the car to get its annual certificate of road worthiness (I’d rather do the hour and a half forest walk home than risk my life with my garage mechanic’s dodgy replacement vehicle) I’ll cut back more.  And I might contrive to walk past my neighbour’s house on the way home and see if Artur is snoozing by his fire.  Wish me luck.

Lunchtime news flash: thumb over the camera lens as I wasn’t as cool and composed as I should have been. 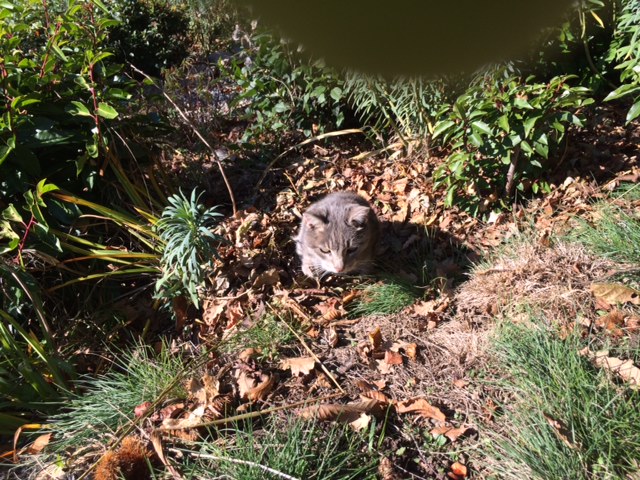 I am so relieved! 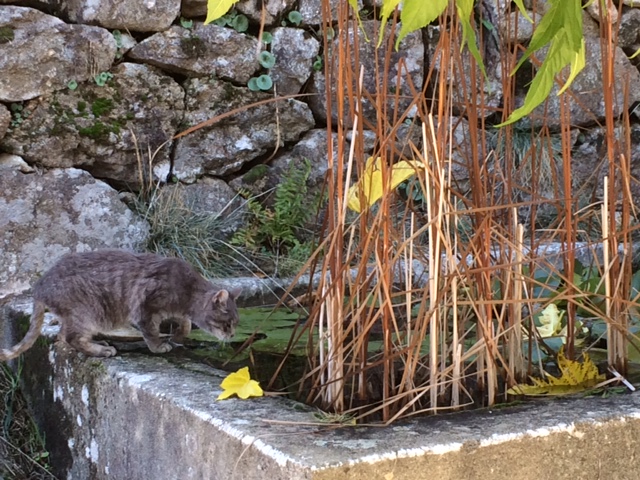