The top potager – yet another vegetable garden 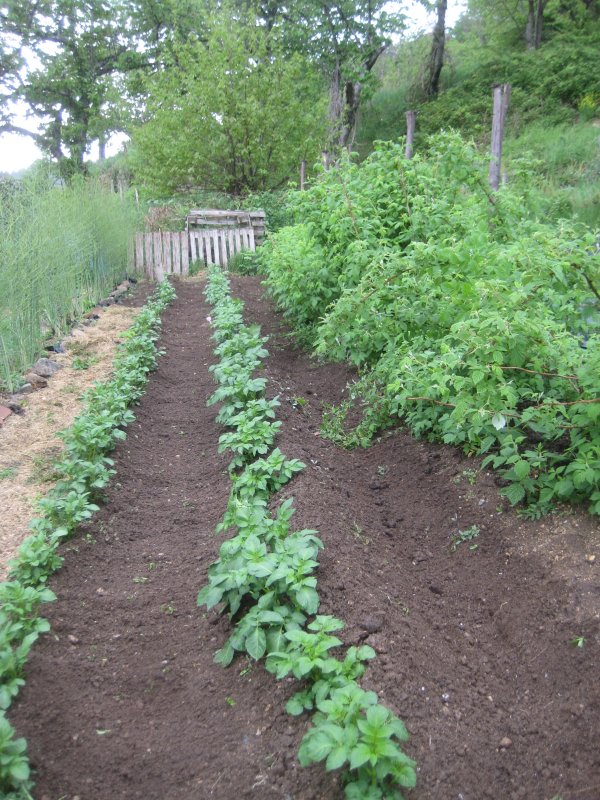 You would think I had enough to deal with in the vegetable department. But this is my second vegetable garden. Tucked away up on the upper terraces, above the potting shed, right near the boundary of our farm.

The reason it is here is because there is an underground spring just above this large area of land. It was flowing well up until the 1970s when it seemed to have dried up. 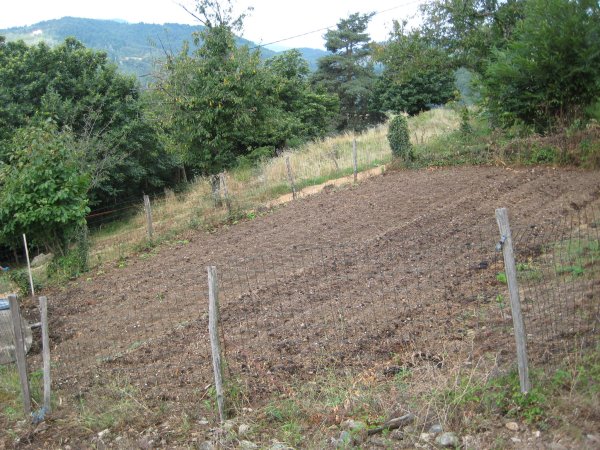 Well not entirely; otherwise the willow tree right next to it wouldn’t be thriving.  That’s a good easy tell tale sign of a good underground spring in these parts. We don’t usually do willow trees (thirsty beasts) around here.

I pollard it utterly every year to make decorations for the front door. I don’t fancy having its roots take all the valuable moisture from this ground. 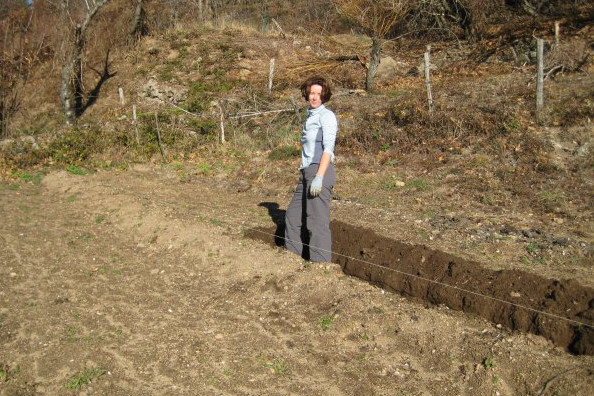 And that has always been the problem of the top potager. The erratic watering.

Oh, and the attempt at keeping it clear of weeds.

In 2007 it was a blank canvas; the previous owners used this area for potatoes and salads.  It’s nicely clear of weeds here.  In fact you usually only see this vegetable garden make an appearance on the Garden Updates in early spring when I have cleared the weeds and look relieved.

It’s all downhill for the rest of the season. 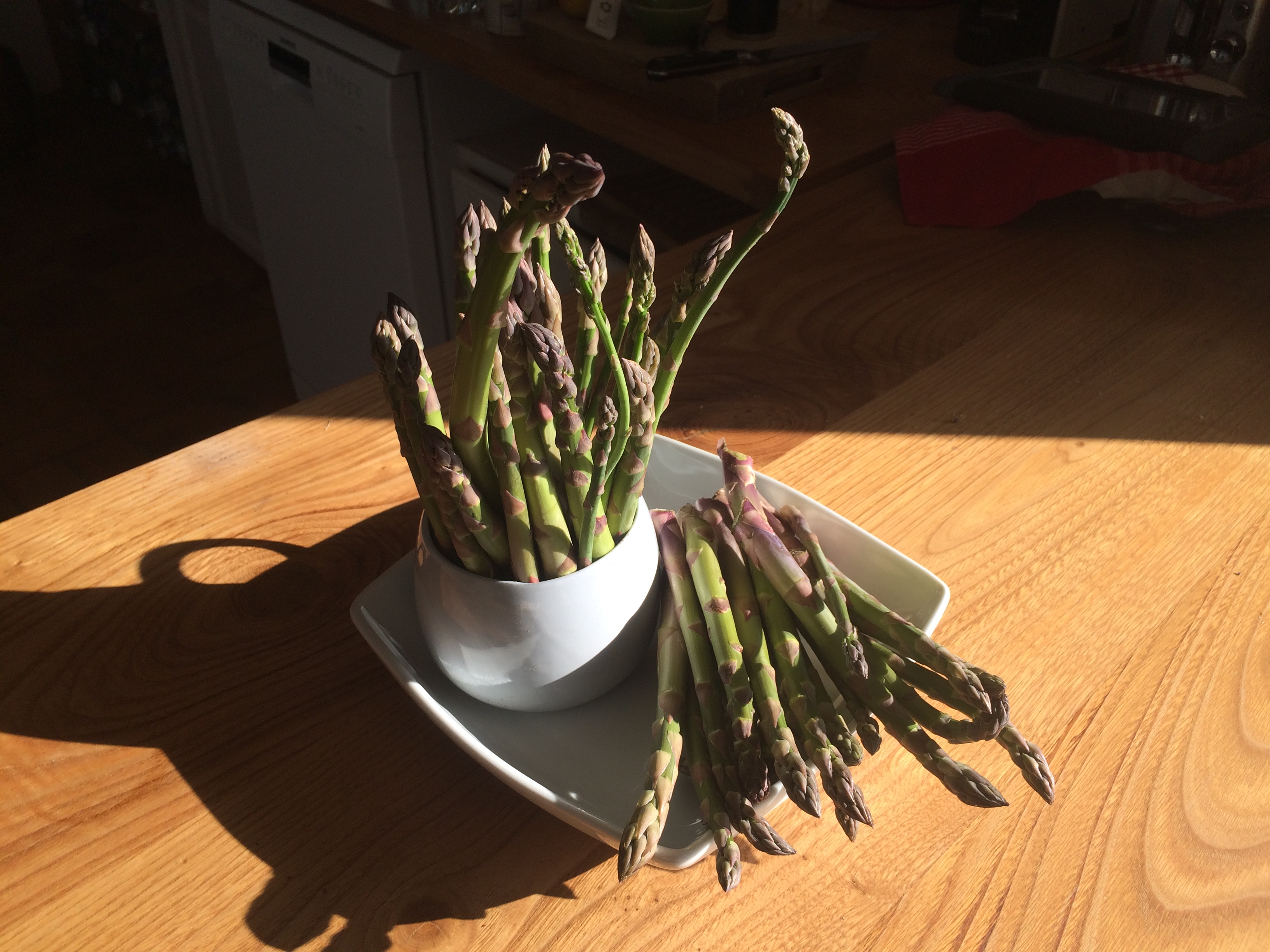 The first thing I did was to dig it over and plant up an asparagus bed.  And put in forty raspberry canes.

I decided to keep it boringly linear and pretend I was back at my London allotment garden again.  Hoe the weeds. Battle, mulch and generally leave it in its unloved state.

This potager does not get the design treatment the one beside the house enjoys.

But after three years of waiting I finally have delicious asparagus. And I can tell you they make the best currency for neighbours.  Everyone loves them.   Especially as they are the purple and green ones, not the (to me) slimy blanched ones. 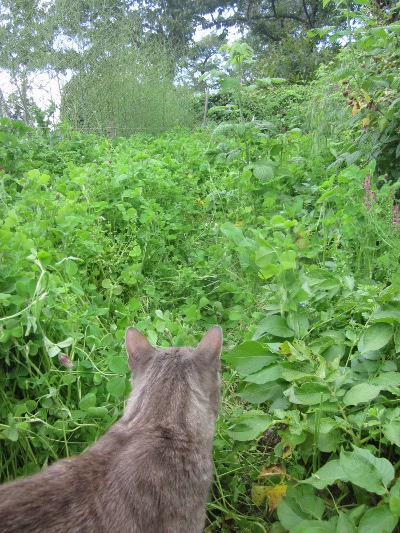 I can count on getting the first spears up early April. And pick daily until the first weeks of June.

So I mustn’t grumble about the top potager. I have one brilliant guaranteed crop.

But the raspberries only lasted three years. Way too short a time for the investment.  I just found that with some drought years, the plants couldn’t get the watering they required. 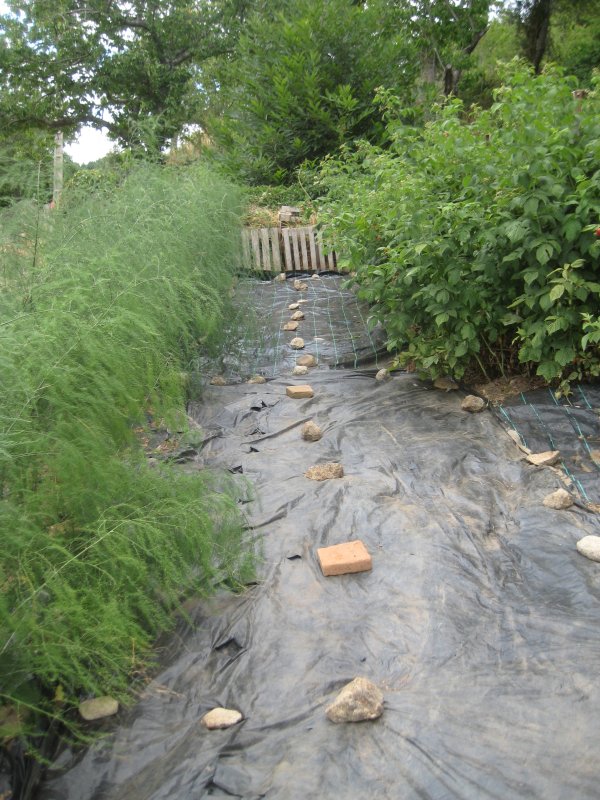 So I have moved some of them down to the lower potager, and just enjoy munching on the ones that escaped my exasperated fork in 2013.

We did have some fantastic crops from them before that, mind you. My mouth drools at the sight of so many juicy berries.  And we don’t have to net them against the birds.

There is just too much easy fruit around these mountains for our bird population.  Wild cherries are everywhere. Not counting our 44 trees. 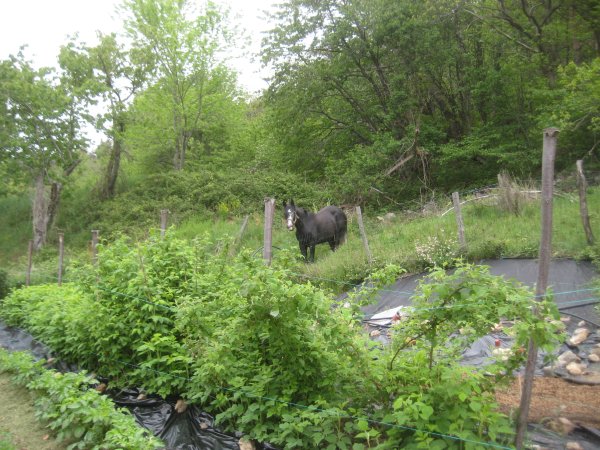 And the birds of prey tend to deter the build up of medium greedies like pigeons who devastate crops of raspberries in England.

So we shared the crop with no feathered fiends.

But the weeds. I tried all sorts of methods over the years. Plastic, weedproof fabric, lawn mowing mulch. That was a great one in between the potato rows.  And I used it to hide the fabric on the paths.

But the best one, of course, was a green manure.  Clover. Red clover. What a gorgeous plant. I sowed it liberally wherever I finished growing my brassicas, potatoes and beans. And then in 2013 I decided to leave the whole potager fallow. It has been worked and worked, probably since the 17th century.

I left it to just the asparagus and the clover.  Artur the cat loved it. It became his jungle. 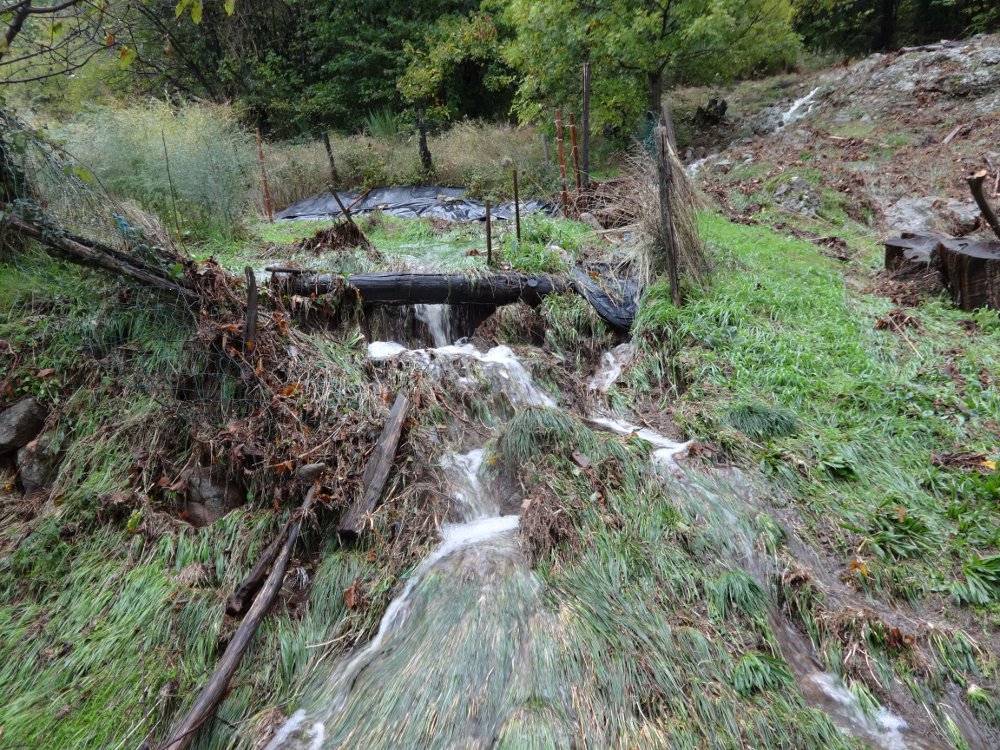 And then the floods of October 2013 wrecked half the plot.  I lost my steps, topsoil, and the wire fencing was pushed down by the weight of water and debris rushing down the mountain.

Dare I admit I fell out of love with this vegetable garden after that? 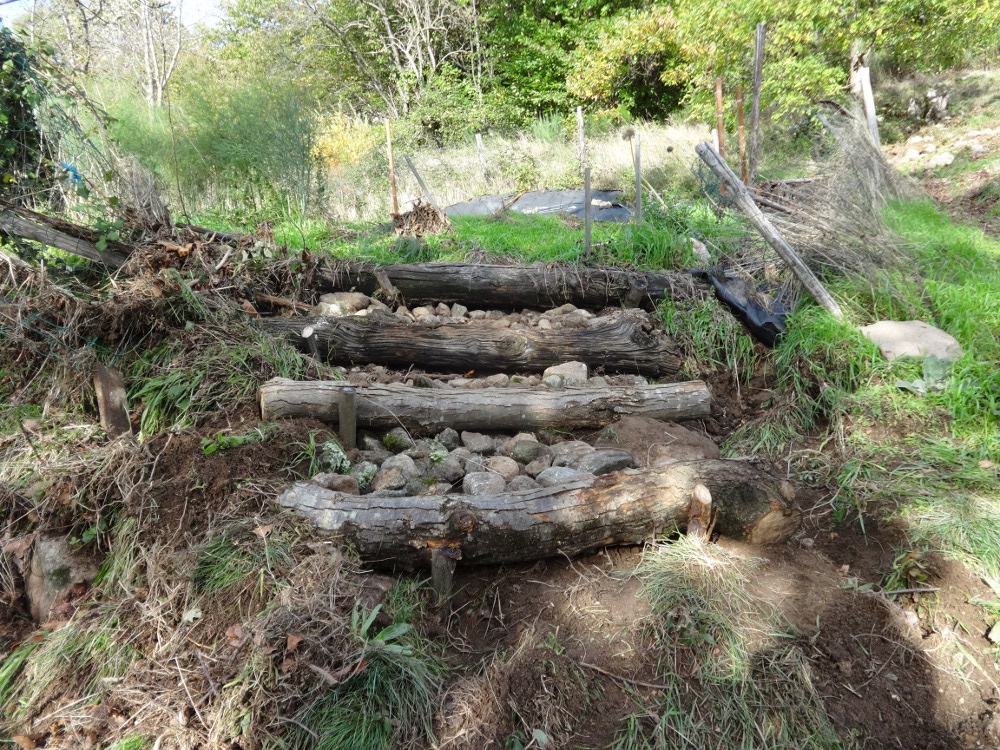 Nicolas repaired the steps.  But for a year I just tried to avoid going there. And only at the very end of 2014 did I decide that it was time to act and nurture this poor spot again.

Out came the useless fencing. Brambles which were invading were hacked back.  Up went a little stone wall. 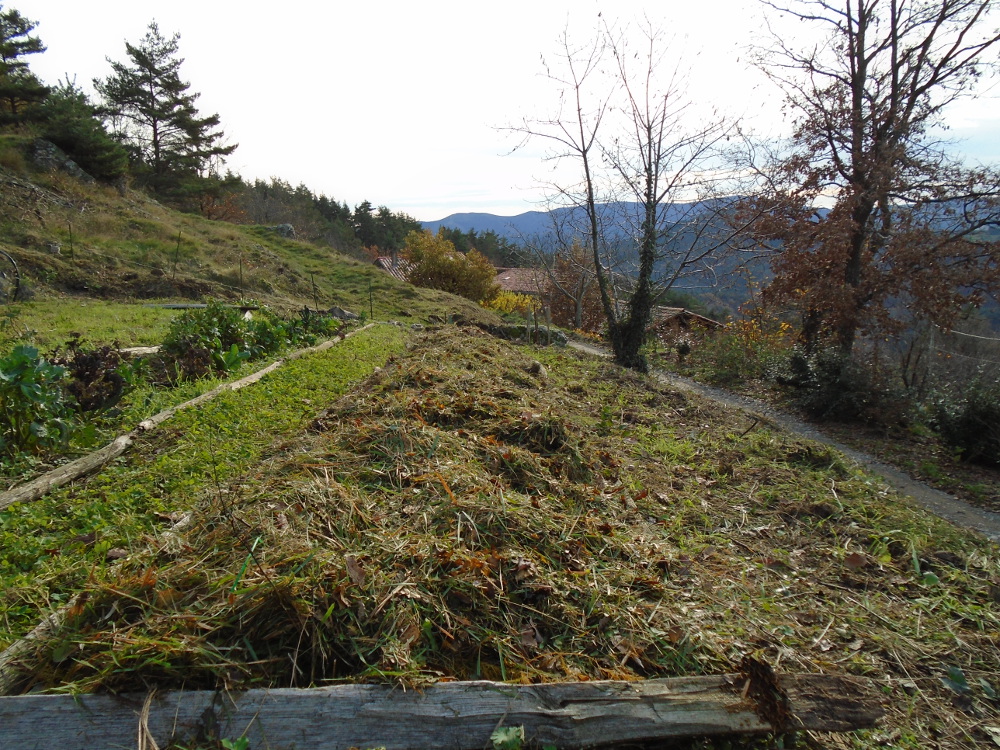 And next I will be putting up some chestnut palisade fencing like the lower potager.

I want to double my asparagus bed; it’s a crop that works well after all.  And keep on planting the potatoes and cabbage and try and turn this into a pleasing productive vegetable garden again.