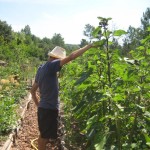 How about this for some height in the cutting garden? Aren’t they amazing? If I was going for the record, I would definitely ask Andrew to save me some seed. And the rest of the garden is just as fascinating. Here are the staples of the summer garden; all growing well and putting on good growth. I always go back to my own garden revived and inspired after a day in Les Vans. 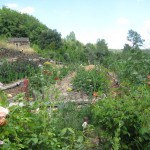 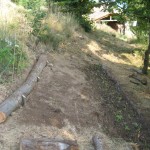 And what news in the landscaping front? Well progress in a word. Here are the two new terraces outside the potting shed. Until I come up with a name they are poetically called terrace four and five. I know, very dull. But eventually they may be named after the flowers that I plant in them. 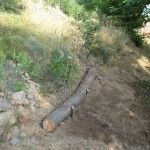 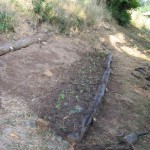 You can see how they are constructed if you look closely at terrace four before it has been filled with earth. Just one mighty chestnut log with stakes. Simple, but incredibly heavy to bring them down from the forest. So I was thrilled that the work has been done.   And I had plenty of seedlings to plant up. These are the contents of the potting shed. More sunflowers, some echinacea, some zinnia. A real mixed bag. But this year they are just going to have to resemble nursery beds rather than careful planting designs. 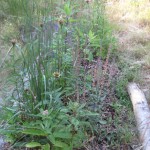 But I am pleased with the progress of terrace number one. It has the calamagrsostis, the echinacea, joe pye weed and salvias coming along nicely. You don’t see the colour well in this shot, but everything is fine.

They do without some of the more attentive watering as the hose doesn’t quite reach this part of the garden. And my great plans for watering the garden from the overflow pipe has had a set back. Someone strimmed the hose in half. And the overflow isn’t happening right now. We have water, but the level isn’t at that sumptuous revel in water everywhere that we had a month earlier. So little rain right now, and not much forecast in the future. 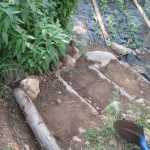 And here is some more landscaping just in case you thought Nicolas was shirking. These are the new chestnut steps around the side of the potting shed leading down to the cutting garden. Bliss. 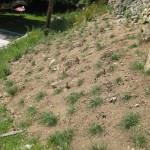 And having a quick scroll of the last few pages post I realised that I hadn’t shown a picture of the weeded pennisetum bank. I really should be more attentive; there must be heaps of things that just fall out of the short attention span basket. I promise to be more diligent with a photo round up in July. Here you are. The grasses are putting on growth and looking rather happy right now. If we get more rain over the summer they may even sprout flowers. 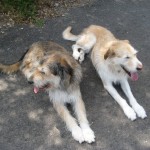 But I couldn’t possibly finish today’s notes without mentioning the four legged friends in both our gardens. Here are Digby and Juno looking marvellously photogenic outside Andrew’s house. And my own small contribution in the form of a borrowed feline. Artur is back.

He has been absent for a week or so; I suspect because there is a feral feline lurking about. What sort of use is that? He is too scared to be approached and just turns into a ball of feline fluff streaking across the lawn when glimpsed. I’d much rather a smooch from Artur. 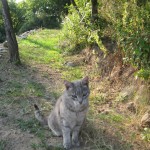