Something thrilling this way comes

Define thrilling. Something that causes so much damage most of the trees up the long drive are either damaged or get branches chopped off?

Something that makes such tremendous ruts in the newly lawn grass that your heart sinks?

Something that gives you about five tonnes of soil to play with?

Yep. We have visitors on the lower terraces this week. 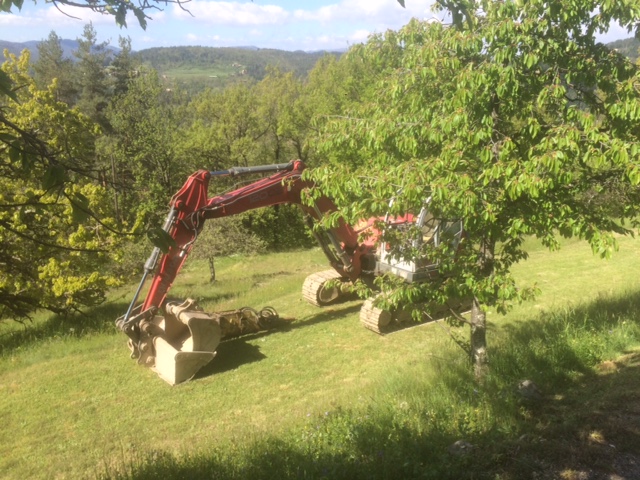 And boy are they huge. 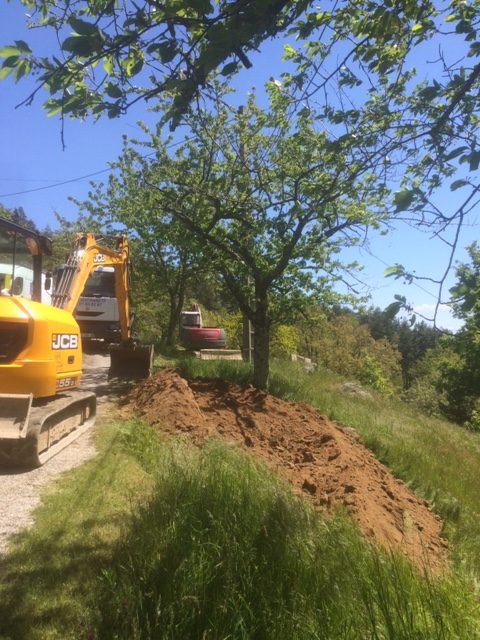 Their mission? To bury a huge septic tank. Link up the house with long lines of pipe, and make good the mess.  A new monster-sized Eloy Water tank that is going to fit in the handily located first terrace below the road.  To replace the, ahem, underperforming one we have now.

But when the foreman roared up with the lads, he asked me a rather pertinent question. One for which I wished I had been more prepared. 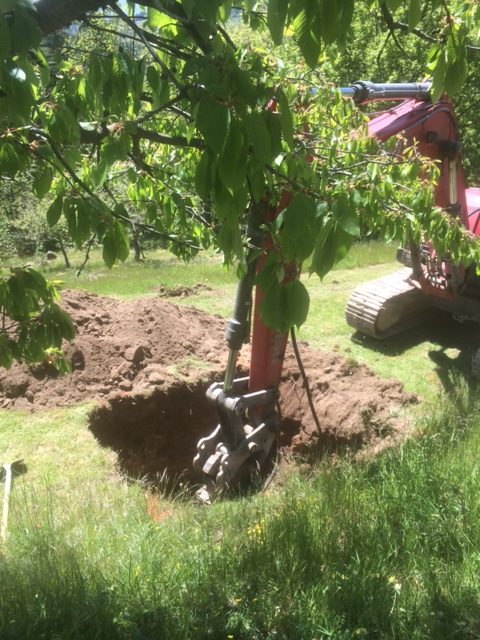 ‘There will be a bit of soil coming out of the hole we are digging. Where do you want it?’

Talk about being put on the spot. I did the fastest mental scroll through all my Wish Lists of where I could possibly yearn for such a lovely bonus (good soil, albeit strewn with rocks). And I had to factor in the need for speed. The need not to make the workmen travel too far from the site of the hole. And the fact that the loads being shoved off the flatbed truck would be considerable and therefore bulky loads.

Errrrr.  The next terrace along.

I wish I’d taken a picture of the before shots now.

Because no sooner had I decided that this wouldn’t be a bad place to try and raise the level of the steeply sloping terrace, then the first load was tipped up and unceremoniously dumped. 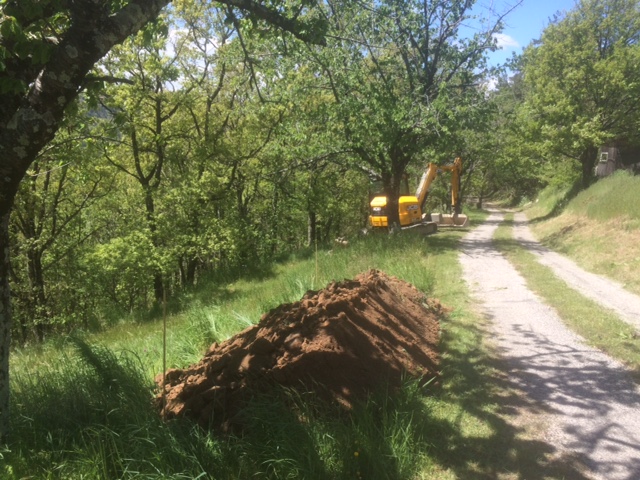 Arrrgggh. Okaay. Smallish pile. I can live with that. A bit of levelling and it will be a rather nice space to re-sow with grass seeds and hope the wild boar don’t come and rummage in the soft earth for a season.

But on and on the loads came.

My fixed grin (I do so love bulldozers) was getting a bit more rictus as I contemplated the folly of what I had asked for.  They could have just dumped the stuff at the parking area and I could have spent a few months wheelbarrowing delicate loads all over the farm. No pressure. 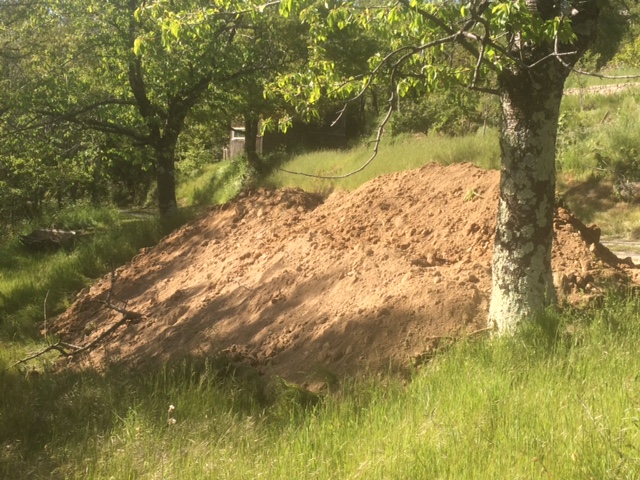 End of day one and here is the wall of soil. So tall I can barely scale it.

I did that nervous owner thing of hovering around the workmen most of the day. Just in case they asked me if I wanted soil anywhere else. Or the rocks put aside for building. Or a modification to their plans.

But to pretend I wasn’t being a helicopter bulldozer groupie, I planted up the herb garden with some instant gratification. 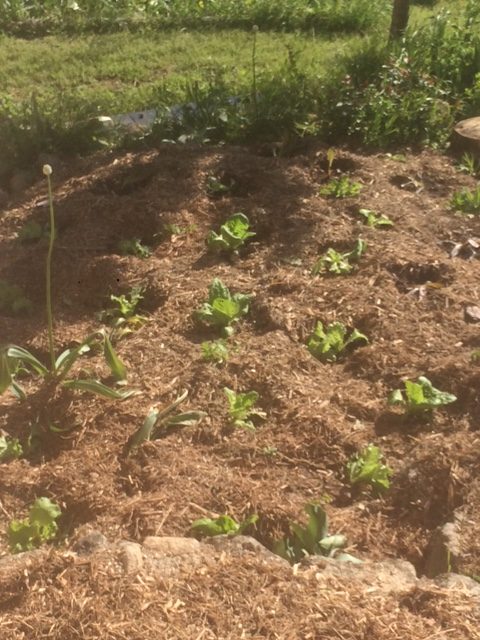 This area is going to be turned into another building site this year now we have planning permission to build. But I can’t countenance the sight of bare earth with bindweed bits all summer.

So in went the lettuce seedlings I have been hardening off. And a pile o mulch.

I could just peep over the edge of the potager and look down on the destruction on the lower terrace as I worked. 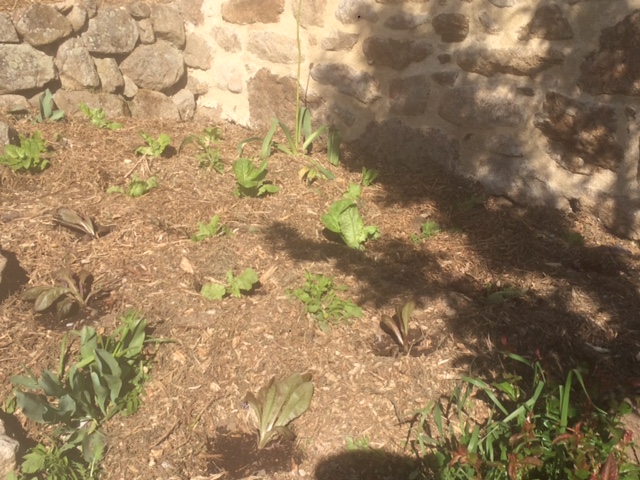 Anxious, moi? Well, yes. And I’m going to be a proper anxious gardener tomorrow when they dismantle the lavender bank in order to run the lines of pipes off both ends of the house to join up somewhere under the council road.

Ooh, that reminds me. I think I’m supposed to be warning the council that their road is about to be churned up and mashed by a bloody great bulldozer.  But I forgot. And there is no way I’m leaving the lads to their merry destruction.  I might get another ‘gift’ of soil to play with. 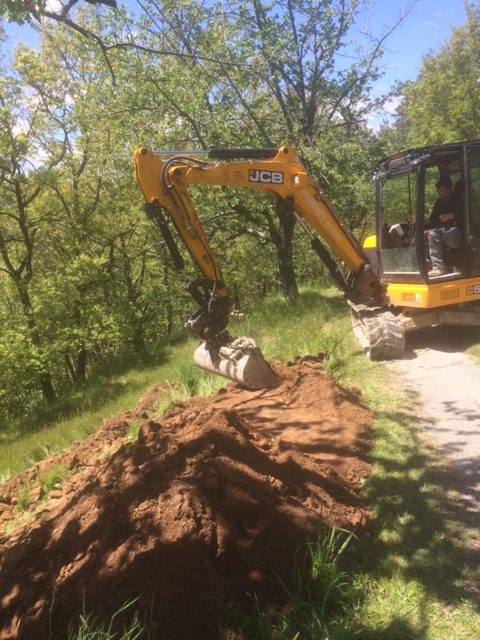