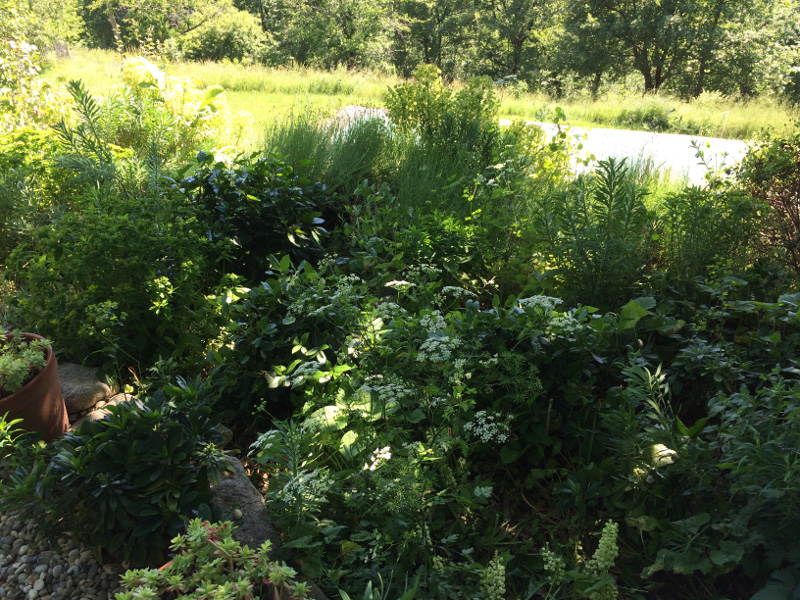 I’ve been forced indoors to clean the euphorbia sap from my secateurs. And wash saline solution into my eye. That’s euphorbia work for you. Sticky and toxic. And marvellous when it’s done.

If I squint with one eye, I can type. It won’t irritate for too much longer. 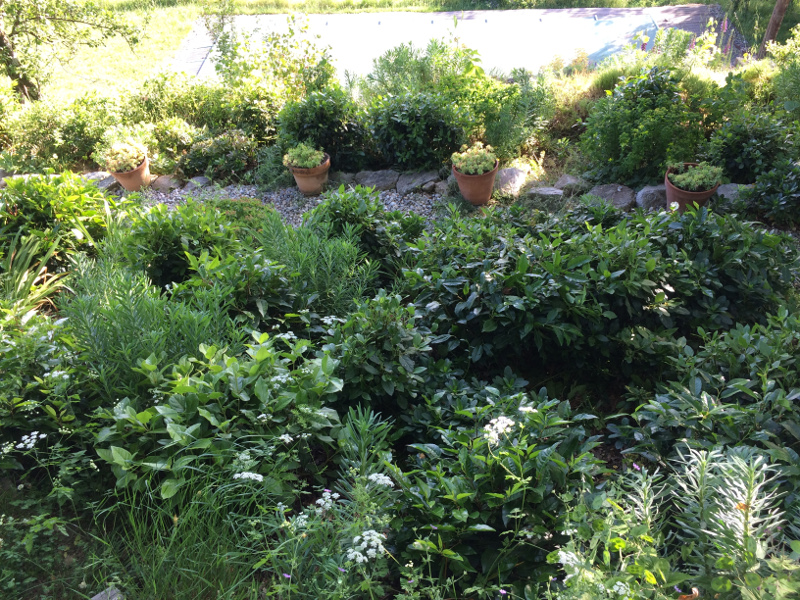 This area of the garden is what I call the Shade Garden. But it’s a bit of a misnomer – half the area is blazing sunshine, half in deep shade. It’s bone dry and has huge trees sucking any moisture from the ground. Maybe I ought to relabel it The Tricky Bit. 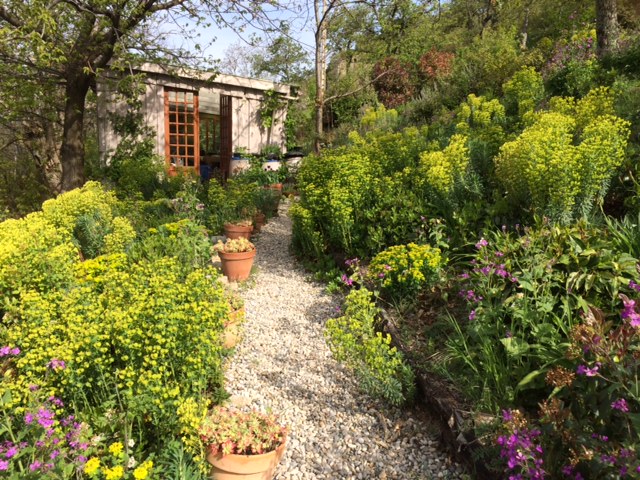 I have spent so much time here this morning rather than just plodding past. And I have realized that it was an almost impossible brief:

It’s a tricky long skinny space to start, hemmed in by a low wall, a slope and a steep drop. And bisected by an old deer track, making the two sides of the space even skinnier.

And you may recall (as I seem to go on and on about it) that it was bone dry and had not one plant.  Unless you count all the unwanted ones in the form of brambles, self seeding festuca grasses, chestnut saplings, suckering plums, and rocks. 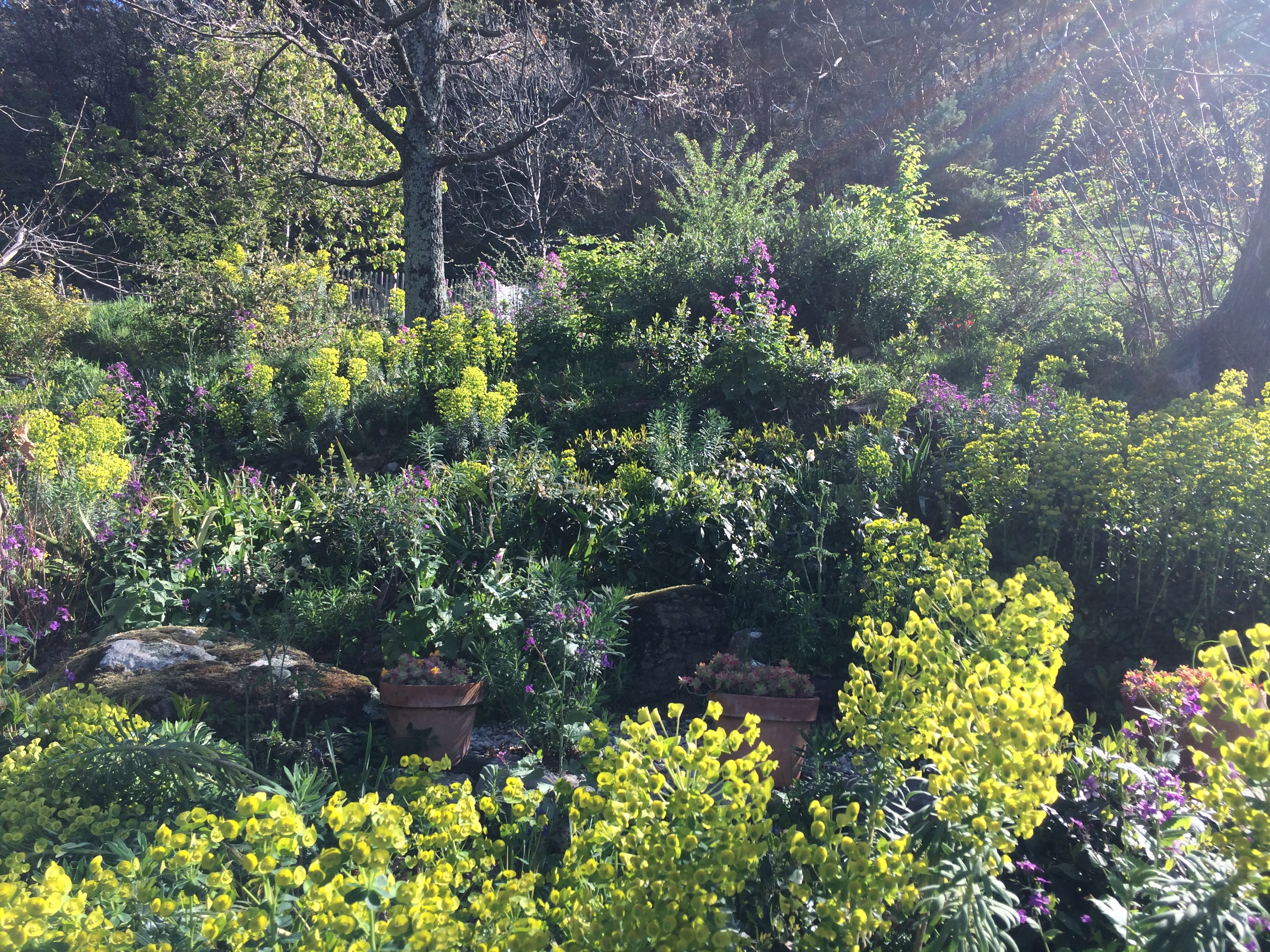 I wanted the following from this space – an evergreen delight. It is after all the place I walk through all day on the way to and from the potting shed and I just yearn for green in the depths of winter.  And a cool shady looking space in summer.

Cohesive planting was what I settled on. So plants that could cope with both deep shade and blazing sun. Shrubs that would grow thick enough to smother the ground; there are oak trees and chestnuts above the garden area dropping acorns and nuts which self seed like mad every autumn.

The shrubs had to be high enough to look in harmony with euphorbia wulfennii which has self seeded everywhere. What else did I want? Drought tolerant. Low maintenance, evergreen. Spot of colour. Nothing much. 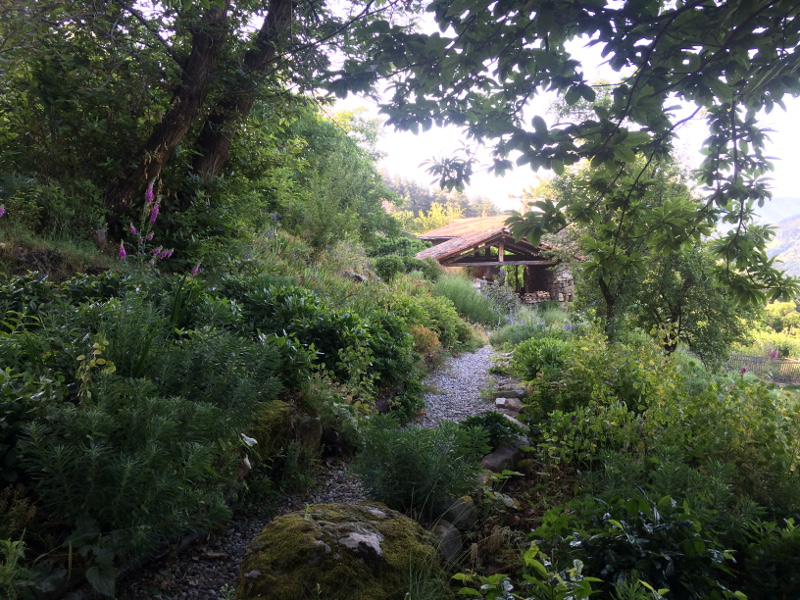 This time last year the beds looked like this: fluffy but undefined. And I wasn’t ruthless enough about pulling up all the self seeded lunaria (honesty).

So what have I been cutting back with such enthusiasm? The euphorbias of course. I don’t need exploding seeds in even more areas. 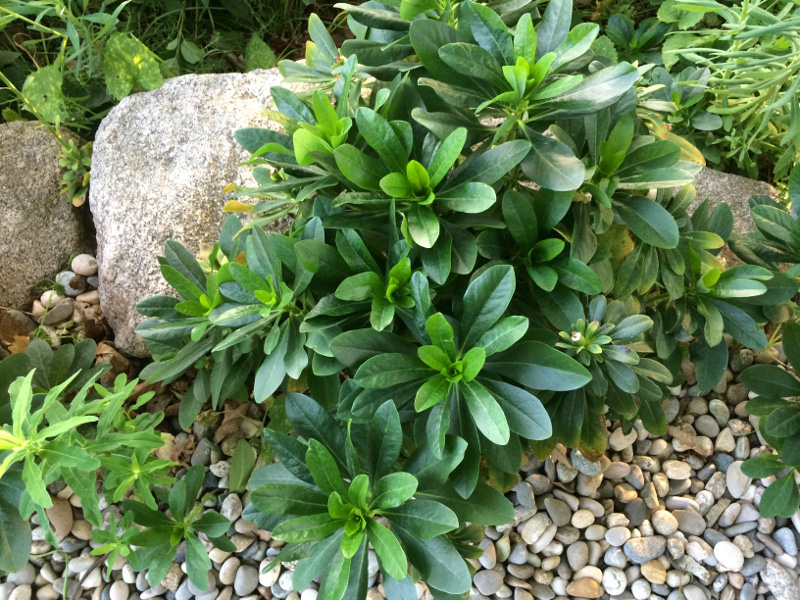 I felt a bit of a pang cutting back the euphorbia robbiae bracts. I love their colour. But I have reached peak Mrs Robb’s Bonnet. I don’t need any more. They spread merrily by runners so having them seed as well does seem a bit much.

And I note that they do get a bit scorched in the bright sunshine part of the garden, so if you are plotting using them, keep them shady. 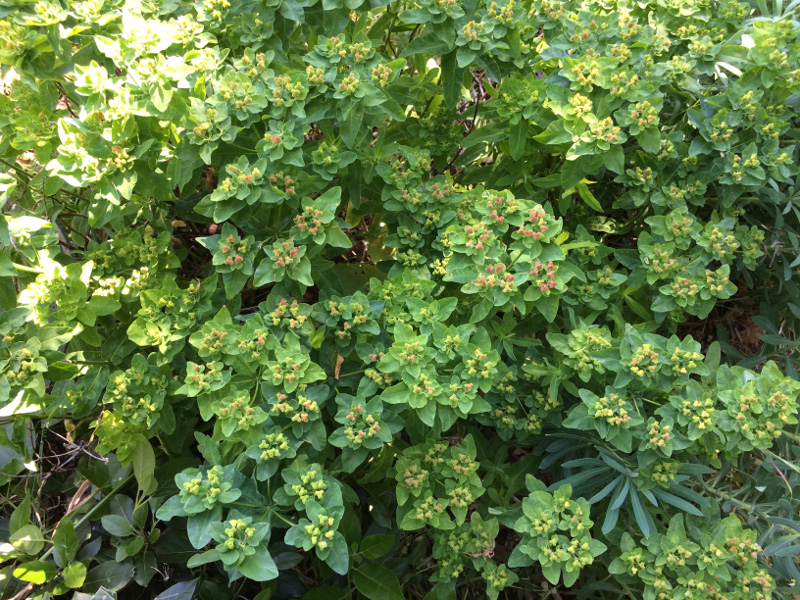 Actually when it comes to maintenance, my favourite Euphorbia has to be the euphorbia polychroma. The well-behaved child of the boisterous (and frankly promiscuous) euphorbia family.

Deciduous in winter – so you can tidy it up without getting an eyeful of sap. And they pop up in spring and quietly get on with looking gorgeous and neatly rounded until summer. Here it is ‘going over’. Oh that I was as neat as this once my bloom has faded. 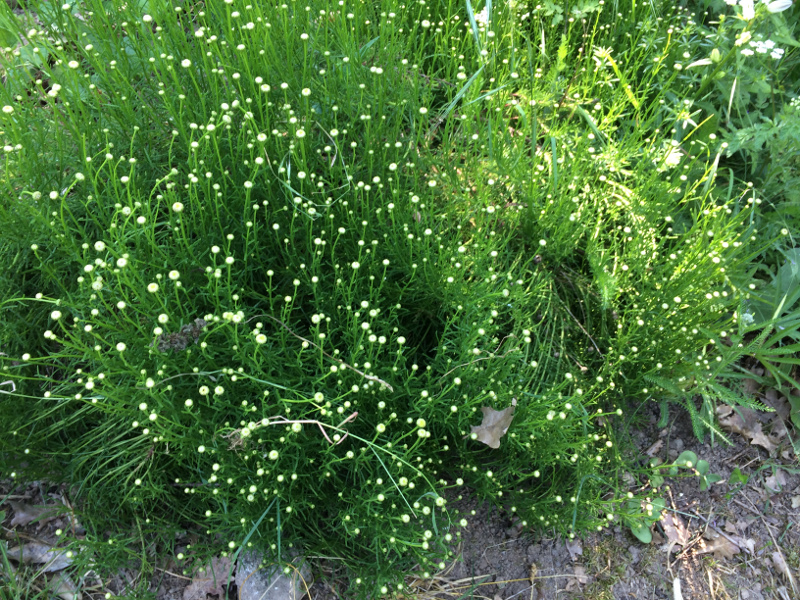 I had to cut back half a bank full of my favourite santolina – Primrose Gem. It is sold on the premise that it takes shade. It does. But it gets so etoliated in search of sunlight; and once the weight of flowers are added to the lush growth, it flops.

So I have given it a brutal haircut, and will avert my gaze for a few weeks until it recovers.  And unlike cosseted plants after a hard pruning elsewhere in the garden world, these ones get zero love. No watering, no feeding. I just walk away. 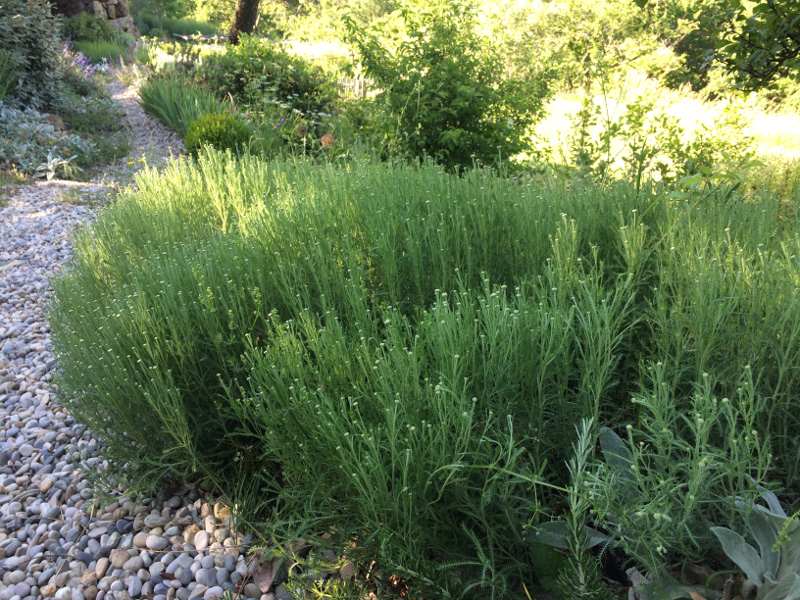 The other santolina which I think is Lindavica (I must ask Andrew as all the plants I have – easily 30 plants – came from a cutting of his) will need hacking back. But I need some early morning or late evening time for that.  These ones are in full sunshine and it’s baking right now.

Besides every time I sit down on the gravel path I get pestered. 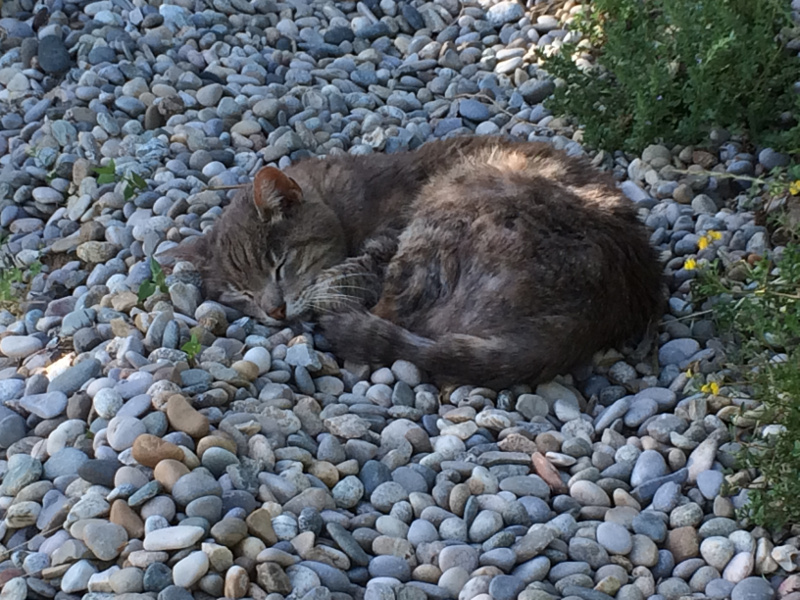 He sleeps right in the middle of the path so he can ambush me every time.

I can’t prune and pat at the same time.

Actually if I was looking for the best behaved santolina I’d have to go for santolina chamaecyparissus. It’s very grey and a bit homogeneous in its shape. But I have had to cut mine back only every other year.  And its foliage is stiffer so there is less endless secateur work. 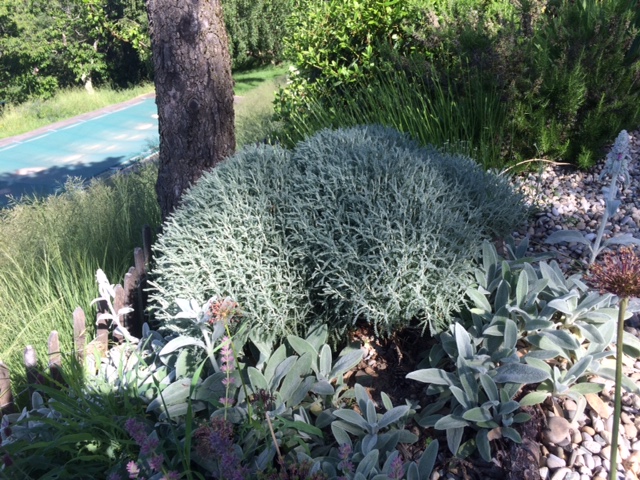 But the colour is so stridently grey it is hard to blend it in with other plants. It’s a bit like seeing a very white/grey haired woman who is about thirty years too young for the colour. It’s bold and confronting, but you wouldn’t want to emulate it. I have precisely one in the barn garden, and won’t be planting more, despite the easy maintenance. 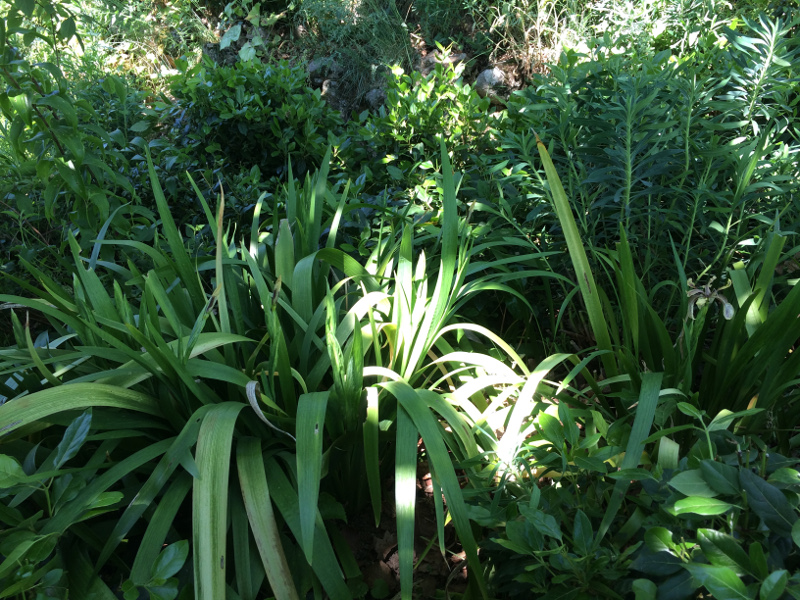 The lovely strappy Iris foetidissima needs help fighting for space in among the privet, viburnum tinus and Portuguese laurel (prunus lusitanica). It isn’t self seeding as much as I would have hoped. But then if you give it very little bare soil in which to germinate then it’s not the plant’s fault. I have pockets full of the red berries, and will try and sow them as soon as I can see with both eyes and it’s cool enough to head outdoors. 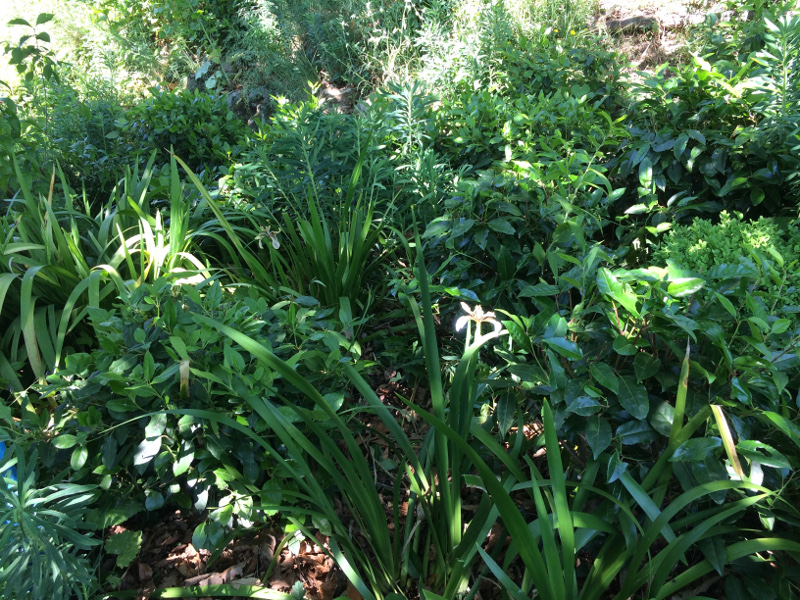 So there you have it. A tamed forest of shrubs. I have space to plant some verbena bonariensis in the sunny bits.  The hemerocallis are poised to flower, the sedums are looking lusty. And the lilies which I plunged into pots (mole rat avoidance) are now released from the dense thickets of shrubs. I can even reach them to try and contol the lily beetles. But that’s another story. 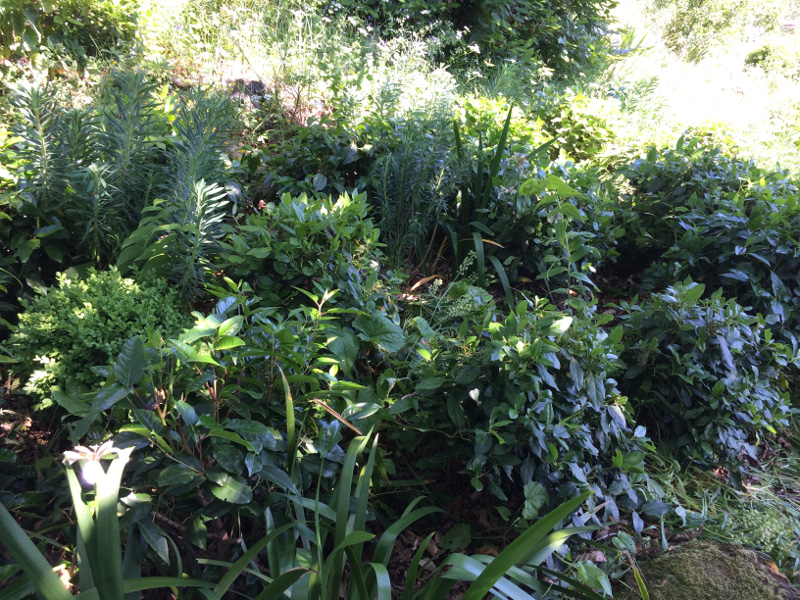 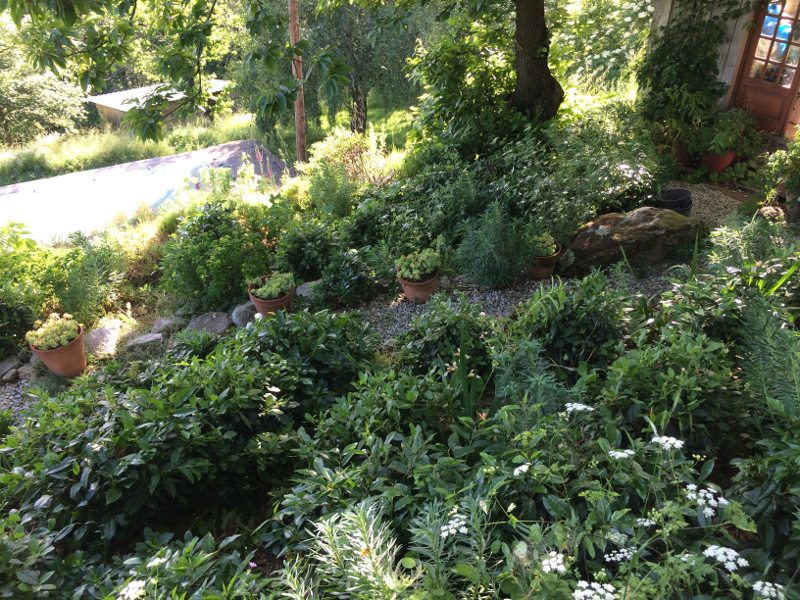