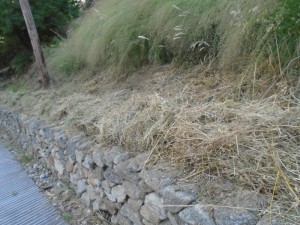 Don’t try this at home folks. Most people would call me mad for trying to plant anything out in the garden during a drought and a heatwave.  But I have little choice.

I need to water the plants in the potting shed every day as they are outgrowing their pots.  So they stand a better chance in the ground.

But I have prepared well first.

First the strim. And now the very deep mulch. The permaculture adherents among you would be proud.  I have to keep this soil protected, so I have layered on a positive mattress sized amount of grass.

Mainly at the front so it will hopefully smother any regrowth of the achillea and coreopsis and nettles.  But also the whole planting area is thickly mulched.

And then it was just a matter of plodding back and forth with trays of grasses. I have planted out 49 in all. I could round it up to 50 – there is room to plant more.  But the sun was just starting to really bite with number 49 so I strode indoors to hide and pick thorns out of my thumbs.

Under the thick mulch there lurked partly composted chestnut burrs.  Partly composted. The rest that didn’t rot down ended up in my digits as I pulled aside the mulch and created planting holes. 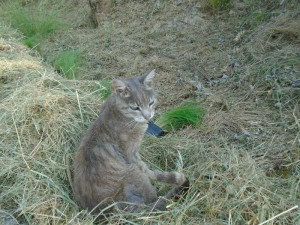 Everything was soaked thoroughly before planting.  And was then inspected by Mr Clingy. He was behaving so oddly today.  For two weeks he has gone straight up to the roof of the potting shed to snooze. But I suspect it is changeover day. He couldn’t settle anywhere. Unless you count my lap.

And that was a non-starter as I was too busy to accommodate a yowling too-hot-in-a-fur-coat cat.

So I planted around him. And when he finally stalked off I was able to get the last grasses in.

I will be watering them morning and night for a few days until they settle.  And in a year’s time it might even feel like a complete planting scheme. 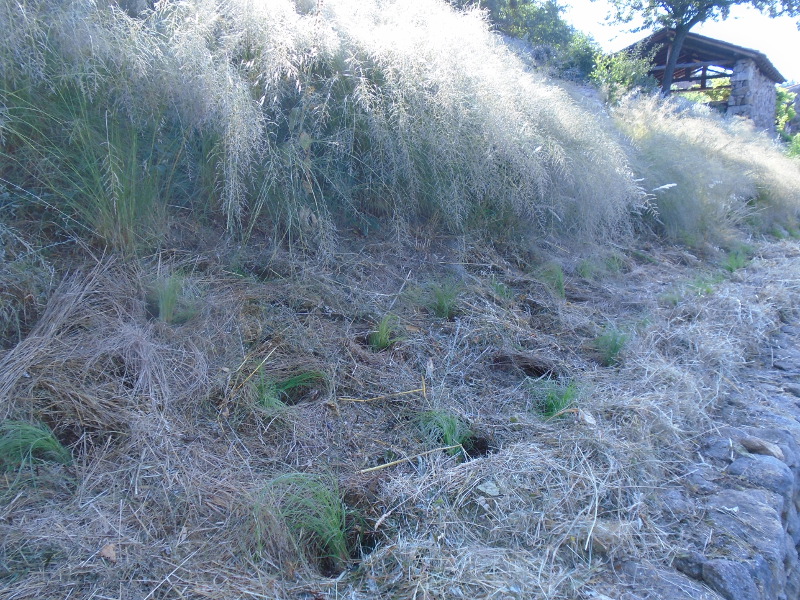