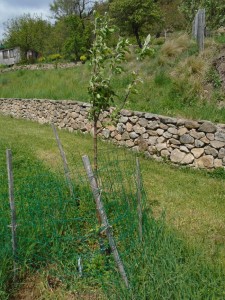 This is a momentous day.  And hopefully not a disastrous one.  After seven years, no eight, I have decided it is time to remove the fencing from around some of the fruit trees in the orchard.

You have to admit they are hardly the most attractive feature.  But they serve, or should I say have served, a vital function. Deer proofing.

In the first year I planted the apple trees I never gave a thought to any passing herbivores.  And you can see from the photo at the beginning of this essay what a mistake that was.

The poor apple tree was munched almost to the ground. I came down one morning to find my fruit tree reduced to a few twigs. It recovered. But now grows so low to the ground you could almost call them step over apples. 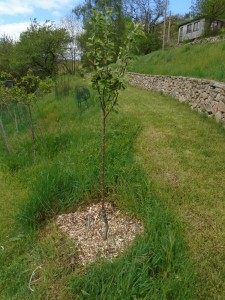 So I built a sturdy cage around the poor tree so at least the deer would have to really work hard to munch the branches.

And I have felt obliged to do it for every tree I have planted since.

I had to leave a good gap at the bottom so I could actually get under the tree and weed. And add mulch. But it was never an easy method for weed control.

Today I was heading down to do some chipping – the branches that I have stockpiled down near the stables were fast disappearing under the burst of weed growth. 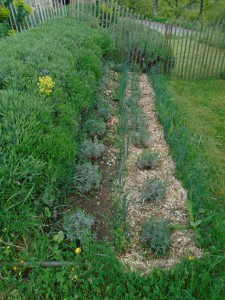 So I decided to untangle them and chip the lot.  I need to mulch the lavender bed which I planted up a few months ago.  So that was the most pressing area for my lovely mulch.

But what do you know? I only did half the lavenders bed when I thought of this mad idea of ‘doing’ the fruit trees.

They are growing tall enough, I think, to be less of a deer meal.  Last autumn I had a pruning session with Nicolas and he suggested I remove all the side growth from the trunks and leave the trees on quite tall stems before I allow them to break and grow.

It’s a risk. But it is so satisfying to uproot the stakes and remove the wire.

I only managed to mulch four of the trees. I’m too nervous about doing the rest as I don’t think they are out of reach of the deer. 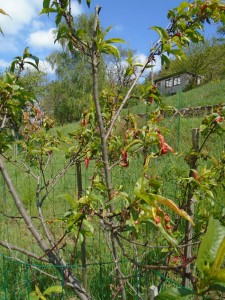 Well, I ought to take down the fence around this peach tree. I’d love it to be eaten by something then I could cut it out and feel no guilt. It suffers from peach leaf curl every single year.  A legacy from the infected peach trees that used to be on the lavender bank in front of the house.

Every year I diligently pick off all the infected leaves – stuffing them in my pockets so I can put them in the rubbish bin.  And the tree gasps and recovers. And last year it even fruited for the first time. But it is not a happy tree.

And every year I threaten it with a chain saw and it seems to just stagger back into growth. Looks like it gets a reprieve. Yet again. 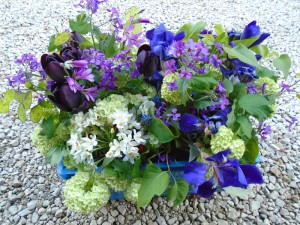 Oh, and before I forget and go off into mulched orchard tree dream land. Here is the box of flowers for the market.

It would have been better to have photographed the four bouquets individually. But I placed them in the travel box before I remembered to snap the flowers. Next time.

« Flowering tulips in the herb garden » The village volunteer day