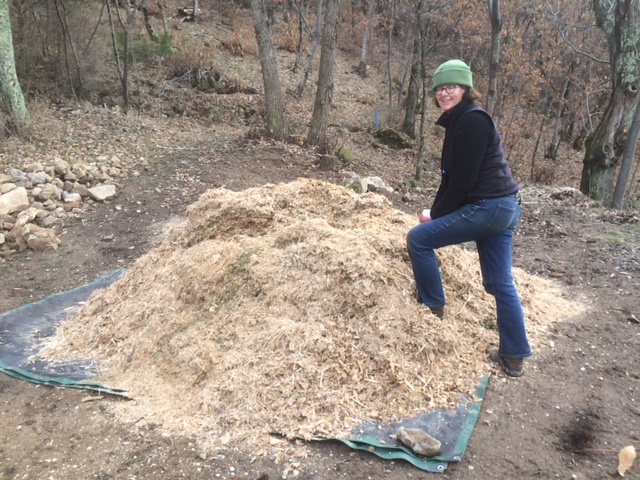 Yes, such is the lot of the rural gardener that a pile of waste product should elicit such a response.

And it was delivered almost to my door this week. Twice. 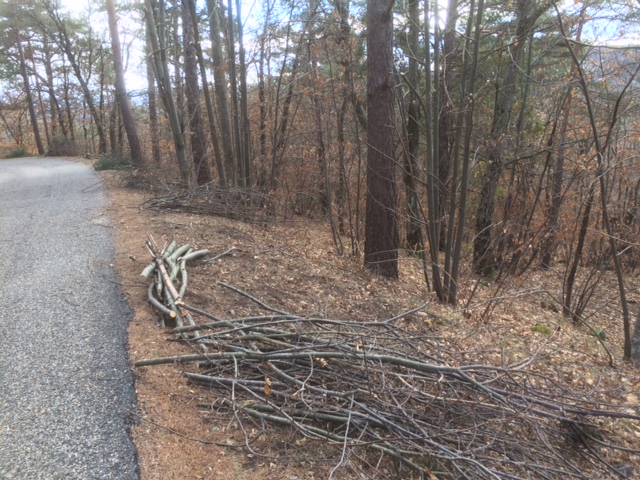 Pause just to let that sink in.  The first thing I did this morning (after letting Artur in for breakfast) was to go out and just gaze on the pile. To check it was still there.

Our departmental roads are maintained in such a way that would make anyone in Britain weep.  No potholes, all the verges cleared and the grass cut back (after the appropriate wild bird and nesting insect season is over). And then the magic really happens.

Once every few years a road gang of five come by and spend a whole month cutting back vegetation by the sides of these tiny roads.  Population about sixty homes on this entire 15 km stretch of tarmac.  And that might be an exaggeration. It’s probably closer to 30. 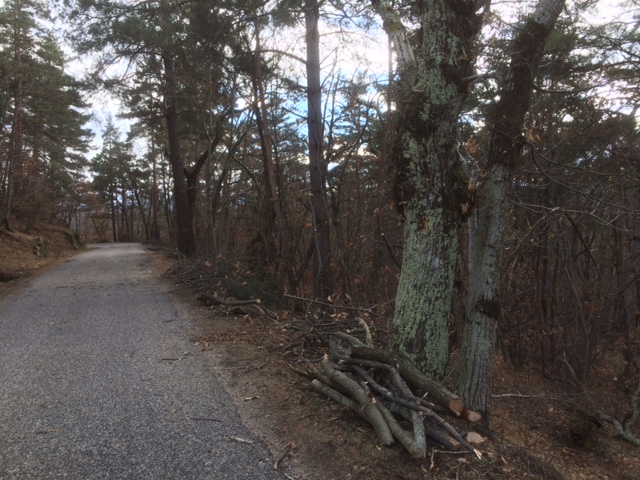 As it’s a potential bush fire region with so many mountain trees close to the road, they trim any small bushes or overhanging branches and really climb up steep rocks to make sure there is nary a sapling or even a tree that might cause trouble in summer.

Down they come.  And after this noisy chain saw and lopper work is done. They pile the stacks very neatly beside the road.  One pile for good wood burning logs. Another for chipping. All the way down the road.

Owners and anyone going past has a few days to clear what they want. And then, joy uncontained, the chipping machine follows.

In the old days. A few years back. They would just chip all the unwanted branches and leave sprays of this mulch on the side of the road. No use to anyone keen on using it for their gardens. I used to haunt the roadside workmen trying to get information about when the chipper would come through so I could stage an intervention and fill my car with the stuff. 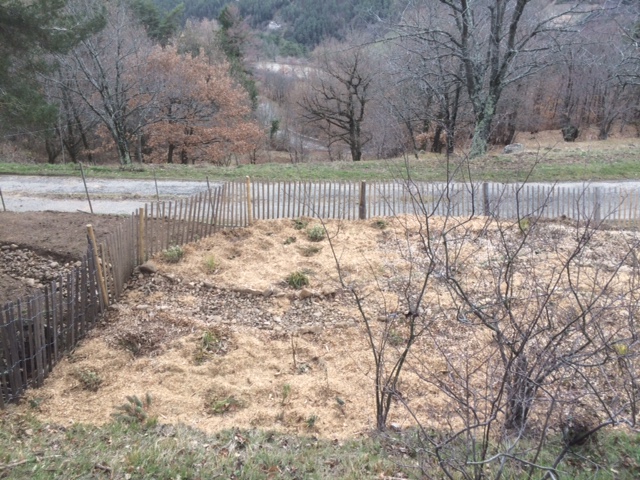 But they were either uninformed, evasive or just worried about this madwoman demanding such a useless waste product, flapping her enthusiastic arms and waving empty sacks in the direction of their truck.

Step forward a bureaucratic rural edict about pollution on the road verges and you have a very happy gardener indeed.

The councils can no longer just dump the mulch. It has to be stored at the depot and put to use.  Some canny councils have realized it is a good fuel. Ours hasn’t cottoned on yet that I would gladly hand over funds for the stuff. 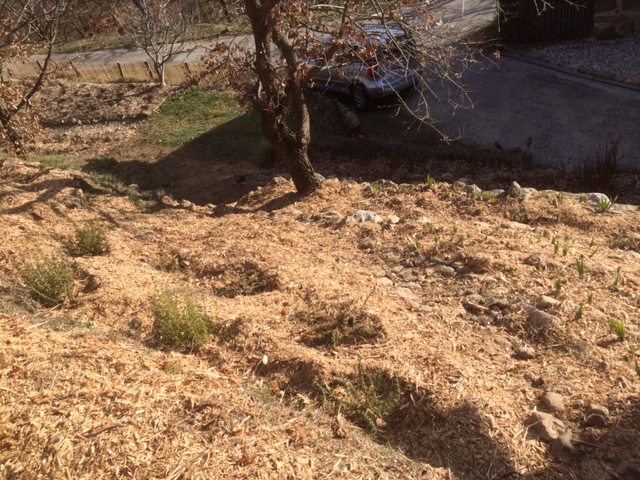 So when I finally persuaded (and boy was I scarily friendly and over keen) the foreman working on the road below our house that he didn’t need to drive his pile of mulch all the way back to the depot, he could just ‘off load’ it at our farm instead. You can picture that particular delight.

To create this much mulch with my little chipping machine and the branches I pick up lying around the forest would take me about six weeks solid work. Laborious. Tedious. Noisy and very, very time-consuming. Time I do not have.

Instead I was standing with a cup of tea and heard the grinding of the gears as the huge truck trundled up the road.   All I had to do was watch and admire as all my wishes came true. 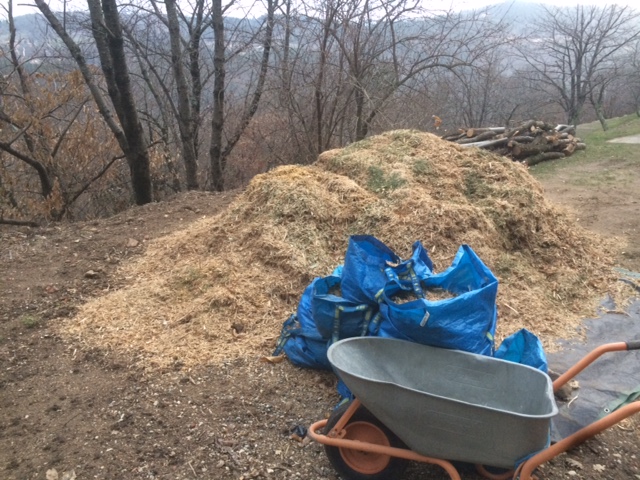 They did admittedly get stuck on the corner of the steep part when they tried to dump the second load. Something tells me they will be reluctant to deliver any more. But this enormous pile is going to transform this huge garden in so very many ways.

Now excuse me while I get to work. Every single Ikea bag in every corner of the potting shed is being put to use to carry mulch that will transform parts of my garden from out-of-control weedy to mulched and improved and tamed.

And the foreman even told me the secret address of the depot where they have stacked the stuff that no one (yet) wants. I’ve tucked away that nugget of gold for future forays up to town. I’ll be carrying a stack of Ikea sacks and a shovel in the car from now on. 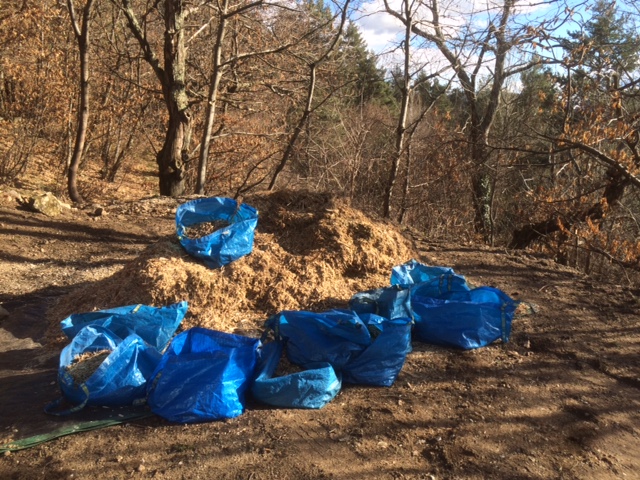