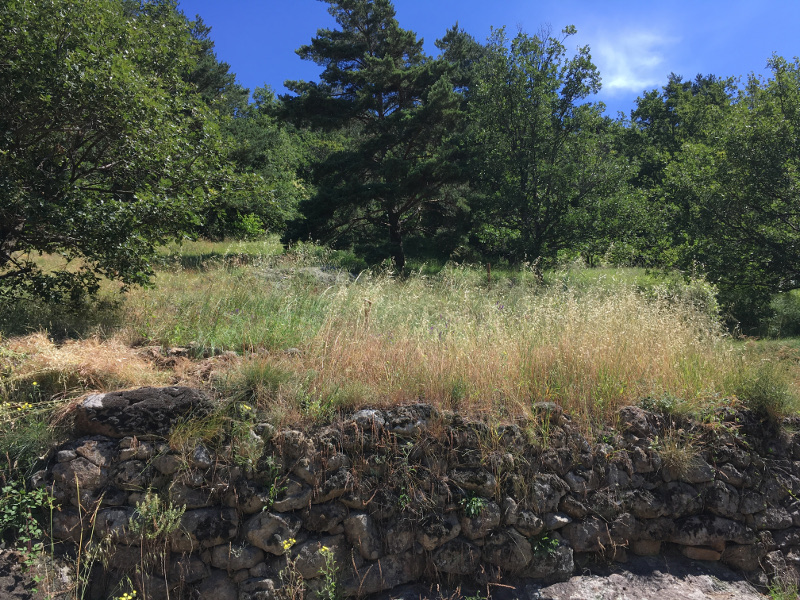 I see a bit of wall building in my future. And it all started with the simple aim of clearing the black oat grass weeds from the teetering edge of the courtyard.

And to think I was only going out to photograph the plants! That will teach me.

Here are the plants in question: the gorgeous stipa gigantea that sit in the courtyard. forming a very informal hedge between the gravel and the dining area. I can’t recommend them more highly. Particularly as you don’t have to cut them back.

Plant and forget. How many plants can you describe in that way?

But can you see the problem in the shot? 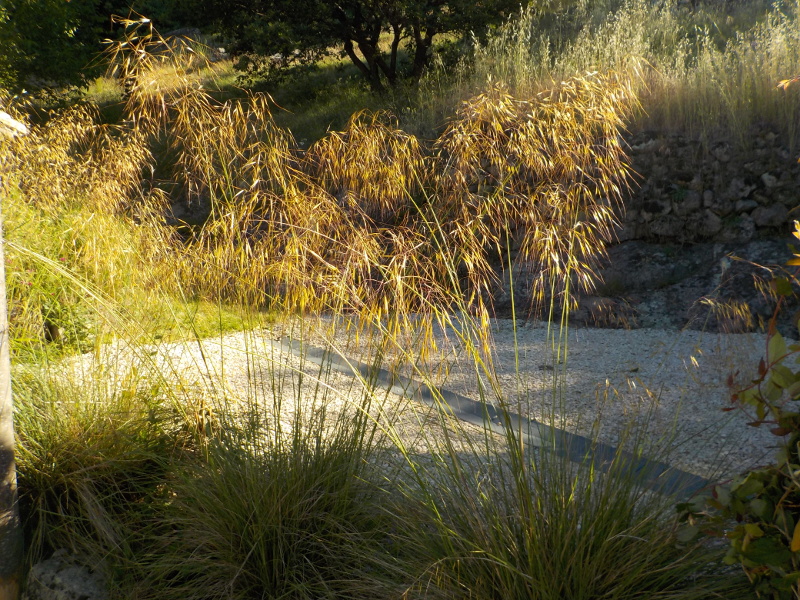 This parched edge of the oak bank usually gets one strim in spring and then that is it.  But with the lush growth in Spring the black oat grass (a bane of one’s existence) went mad.

So mad that strimming this area, tricksy at the best of time, became a positive perilous adventure. 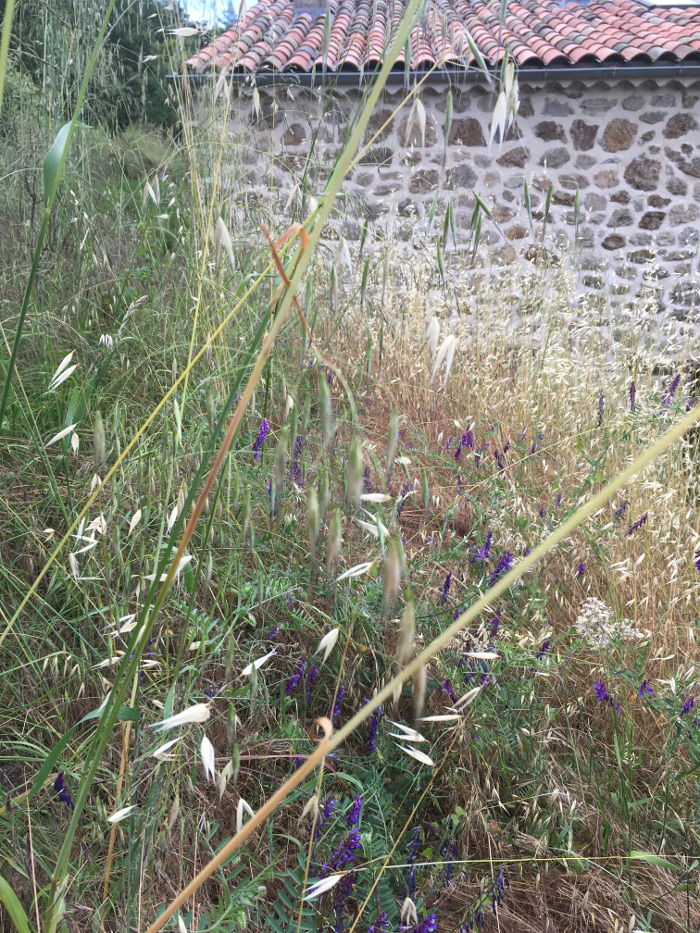 So instead of begging any daredevils to have a go and risk a broken ankle or worse slipping off the bank during a session, I went up with my secateurs and sat down at one end and pulled the darn stuff out.

I pulled and pulled, yelped a few times when I found the hidden ant nests under the weeds. And kept going. 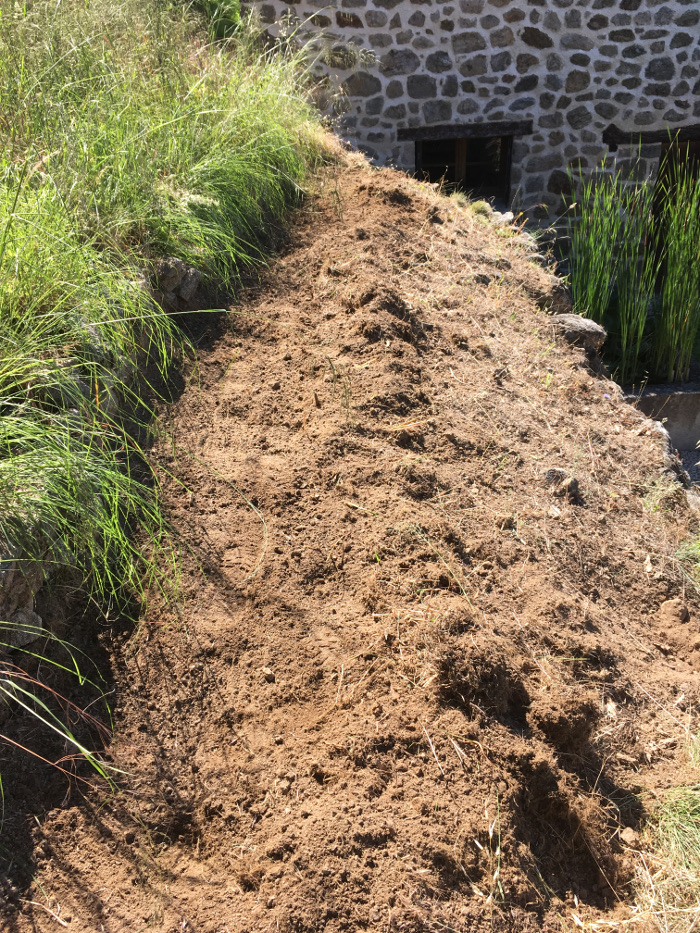 I worked out that the ant nests are spaced about three metres apart. So once I accidentally disturbed one, I could shift over a bit and weed more, before I careened into the next huge mound of boiling biting anger.

Marvellous fun. In the heat. 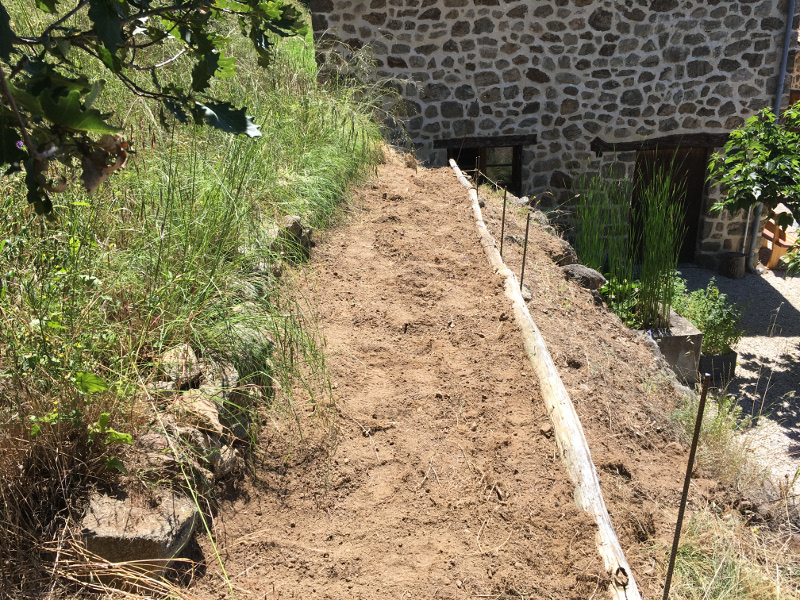 So, now what? I realized that unless I want to ‘enjoy’ this exercise every summer, I have to come up with a solution.

Extend the garden area. Plant it up with irises.

You can’t tell because I haven’t finished the mundane weeding of the eragrostis curvula grasses back here but there are three narrow garden beds. Mulched with grass in between. Right now it’s a black oat grass plant nursery and there are two dead oak trees hiding in the undergrowth, but sometimes it works. Behold one I made earlier. 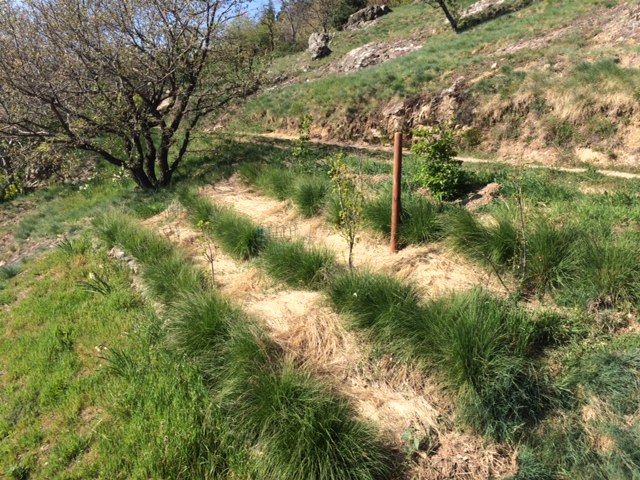 So now I have decided to make four. But I have reached peak eragrostis (at last!). I want to get the same pleasure from verticals, but with my adored irises.

You can see the effect they have on a steep bank in the guesthouse garden on the other side of the barn. 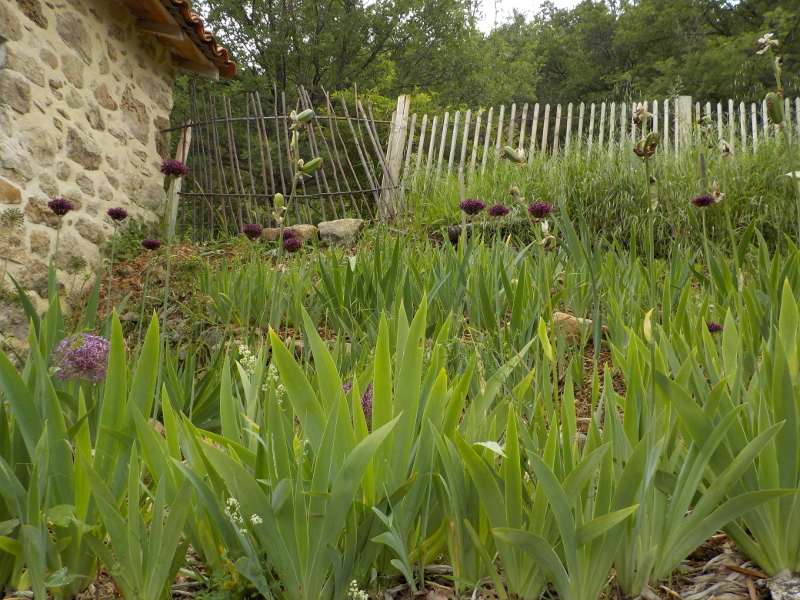 It will need mulch. And I won’t transplant any of those irises just yet. I am already picturing the raiding party on other areas of the garden where I can steal the plants I want.

I wonder if I can nip up to the depot and nab more chipped bark to secure the very teetering steep slope in front.  Note to self.

So while I dream of raiding parties for plants and mulch, there is also the challenge of fixing the end of this garden. 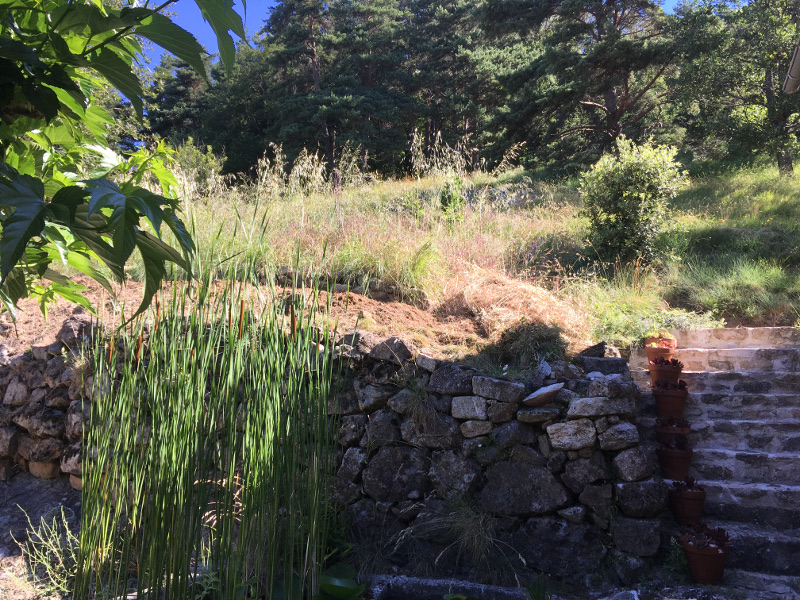 I need a bit more wall.  See how it slopes down?

I need to build up the corner of the bank above the liliy pond and get it up to the same level further along the bank. About 50 centimetres will do it. Plus the side of the garden near the steps.

I can’t believe all this came about from just taking a photo of a grass!

That’s landscaping and gardening for you. 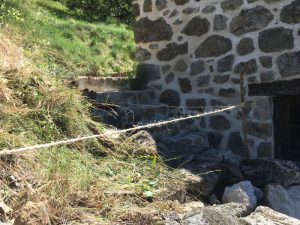 And once the tooth fairy has done the wall (I tried my usual suspects and there was no one keen on this mad Summer adventure, so the winner of the wall building award goes to me) I will need to fill in the gap and build up the bank so it is the same as the rest.

At least that bit was easy – I made a start by dumping all the weeds I just yanked out and buried them under the dusty spare soil. 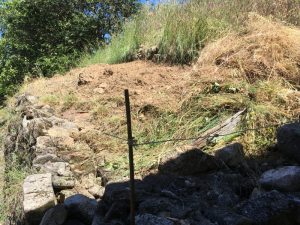 That pile will grow and grow once I get round to weeding the rest of the bank.

In fact, what am I doing indoors prattling away when those weeds are ripening and threatening to spread their seeds at the merest hint of an approaching gardener?

I swear I can hear the ants and the oat grass communicating as I speak.