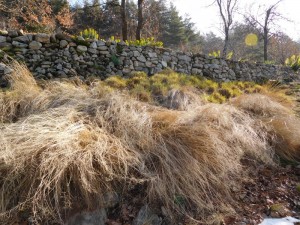 It looks like waving tentacles of some undersea creature.

Or my steep banks of grasses having a bad hair day.  This was my half abandoned project of grass cutting. I had to drop what I was doing to fly to Australia and only came back to the job five weeks later.

And this is not just mowing; these are ornamental grasses.  So it involves sitting next to a thicket of grass, grabbing said hank of stuff in one hand and applying the secateurs with the other. 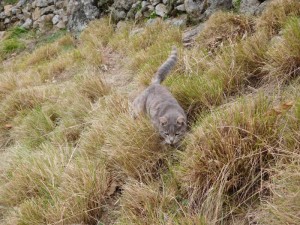 And then  you have to fling all the stuff somewhere.  Best not done in high wind.

This week was have had the most monstrous gusts of Mistral wind. Up to 80 kilometres per hour which was sporting. And I swear the gusts only hit this farm just as I was poised to fling the cut grass about.

I could lie and say I had a helper. But Artur only turned up when he was hunting a cuddle and a lap, rather than a mole or a mouse. 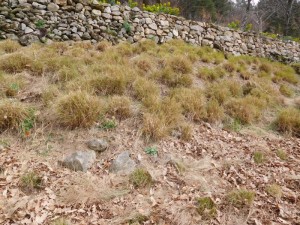 And I think he was cross that I had cut back his best snoozing spot. Sunny but shady.  It’s all a bit exposed now.

But it won’t be long before these fantastic eragrostis curvula grasses put on a burst of spring growth and Artur will have somewhere to hide again.

I even cut back the little titchy grasses I planted late last year that you can see in the front of the established bank.

And then just to mix things up, I moved along the terrace to the grasses that grow on the bank above the lawn.

There is a wall of miscanthus at the base. 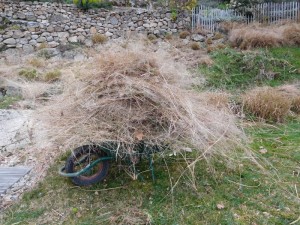 And there is another bank of eragrostis.

What is distressing is how late I have left this job. You can’t see from the dead looking stuff on top, but there is a lot of green growth underneath.

And I just don’t know if the eragrostis is a grass that will no longer flower if I have cut back the tips of the new green growth. 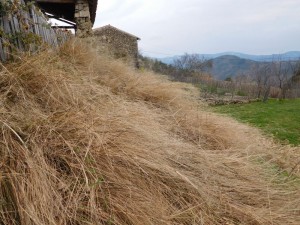 I am trying to picture how they grow. They are an African grass so I am hoping that the grass has developed along with a lot of herbivores that will happily munch the top of the grass and the plant will bounce back.

I was the equivalent of a springbok today.  Reducing this mess of collapsed foliage into the tight mounds of neat ornamental grass.

And unlike a springbok, I weeded as I went.

There were nettles, some random brambles, and a few annual grasses which don’t get space on this steep bank. 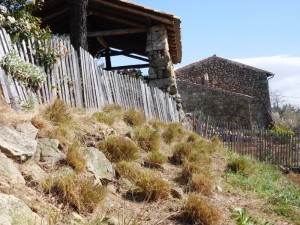 I did sneak in some verbena bonariensis seedlings which I have unearthed from the potager.  There is plenty of room for those lovely tall purple flowers’m very good at forgetting  in between the eragrostis.

If I remember to water them.

I have a bit of form when it comes to neglecting the watering in this huge garden.

But rain is forecast on the weekend, so that might help. 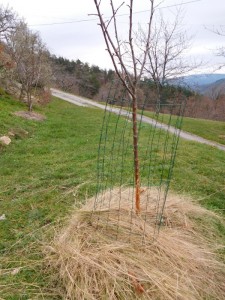 And in the middle of a stormy windy week, I decided to put most of the cut back grasses around the trees in the orchard. It’s a pretty good mulch.

Most of it is now scattered prettily all around the orchard, rather than tucked close between the trees and the tree guards.

Yes, this is the ‘after’ shot. I had taken down the tree guards last summer as I thought the juicy parts of these small apple trees were safe from the clutches of wild deer. I have pruned them so that the first branches were above deer height.

But when you get heavy snow there is nothing for the wild animales to chew on apart from bark. 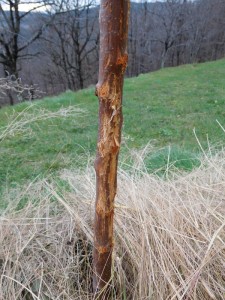 And it took only two days for this lovely little apple tree to almost die from my neglect. Curses.

That will teach me. And also remind me that I share this mountain farm with an awful lot of unwelcome vistors.

Good thing this blog doesn’t have audio. You have been spared my cussing.