Sorry about that delay. Sciatica. Lots of lying prone on the yoga mat pretending everything was fine.  It makes me think fondly of 2017 when I had not one single attack. Ah well.

And it’s not easy to type on a laptop when the last thing you want or have is a lap.  Standing or lying.  They are my current favourite, least painful, gravity poses.

But mustn’t grumble. The snow has melted, the temperature is rising. On with something I have wanted to show you.

Well, first an Artur trick. He has been poorly with old age and an eye infection of late.  He barely left a spot in front of the fire for days.  But with warmer weather and a temperature inside the potting shed that has leapt above freezing he has ventured out.

So to cheer him up I brought home a new wooden box from the Bio Shop on Saturday.

Add in a fleece from under the staging bench and he was in heaven.  It took seconds for him to find it.

He won’t be moving for two weeks. And his purring is a lovely accompaniment to my work.  It’s still too early for seed sowing in a major way, but I have done a serious spring clean of the whole potting shed and I am poised and ready any day now for action.

Meanwhile. Up at the top potager. 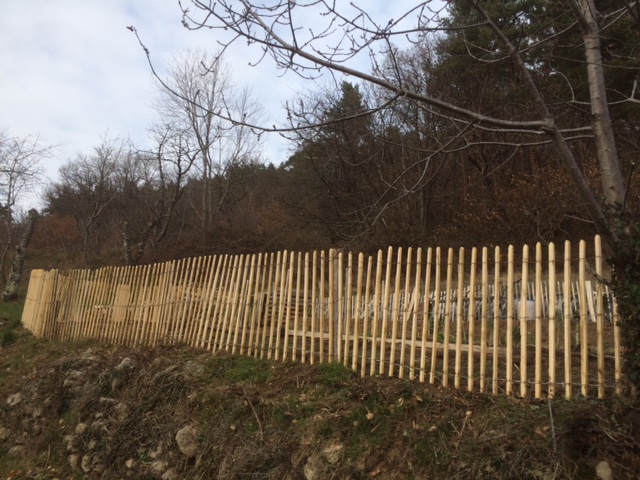 My love affair with sensible chestnut fencing continues.  But possibly the last?  I had only ever half-fenced this area; but with the general improvement in the form of a permaculture bed and even some proper work (I weeded and mulched the asparagus patch) it was time to get it ready for spring. 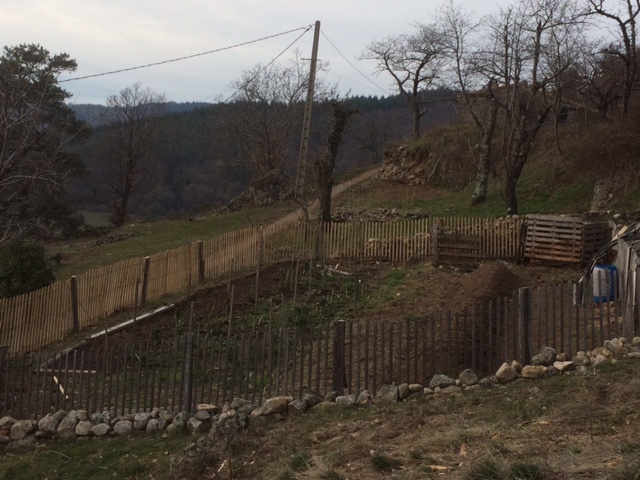 For the March hares.  For the hungry badgers and boars. Animal security at last. No more heading up early in the morning and having to shoo away the huge hare from contemplating the cabbage patch. 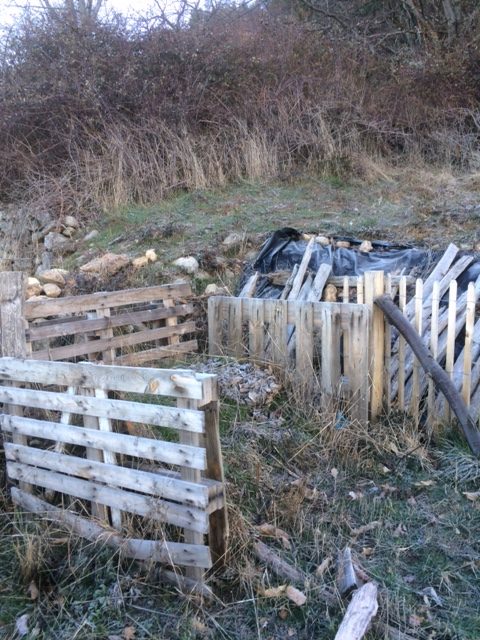 And we even had a go at hiding the eyesores. A few years ago I made a temporary compost bin out of wooden pallets. But it needed moving so the fence could be erected, and Nicolas convinced me that it needed more than moving.

Dismantling and rather muttered words that seemed to sound like ‘ugly’ and ‘hideous’ were heard. 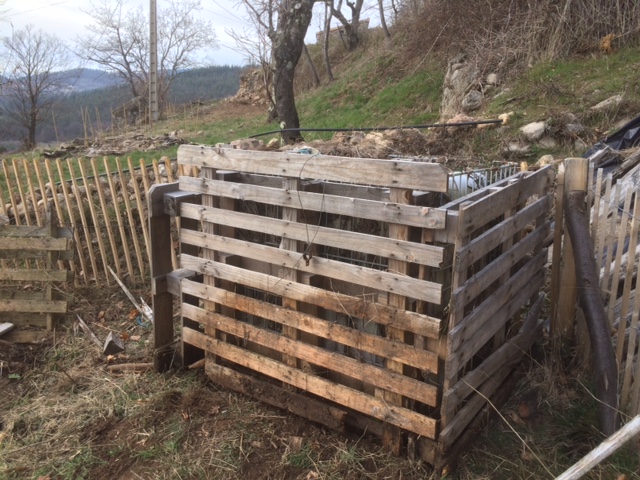 I concurred. Never argue with someone who is sorting your fencing I say.

And we actually fixed two eyesores in one go.  Farewell ugly white cube that holds my water supply up here; hello panelled feature. Hidden by the wood.

It is now tucked up in the corner of the potager. And looks so much more elegant than plastic.

Why, I’m positively blending in with the surroundings.  Now on with a bit more weeding and mulching and I won’t even be ashamed to garden up there.

« Preparing the asparagus bed for spring » A March mulch pile