I have been entertained this afternoon by listening to podcasts of the Australian cricket test between India and Australia that is taking place right now. And nothing beats the priceless commentary of Jim Maxwell.  I was chortling most of the broadcast.

Try this one for a very Australian turn of phrase: ‘Jeez, he’s like a dog off a chain when he gets going.’  Maxwell was describing the batsman David Warner; but it could just as well be describing me when I finally made it out into the garden. 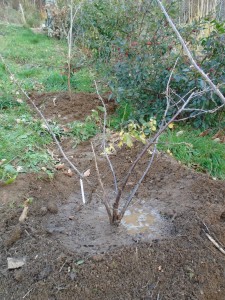 I had to do Vernoux chores in the morning, but as soon as I had climbed into my gardening clothes and chatted with Artur I was off.

I wanted to transplant the jostaberry bushes;and I had the perfect spot. A soft weed free area just behind the large mixed hedge behind the potting shed.

These ones are for Paul and Alice when they get their house built and are ready for a garden.

And further up the slope I have moved the mulberry; given to me by Teo and Leslie for my birthday this year.

I had to shift it so that Ulysse, my favourite horse, can’t reach it. He usually stands just beside it when he wants to be pampered with apples. And the tempting juicy branches were obviously more fun that hanging about waiting for me to feed him a treat. 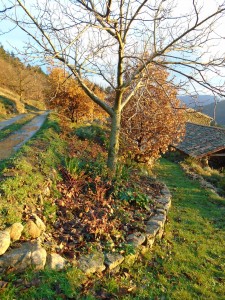 There is an electric fence standing between him and the mulberry. But he has a lovely long reach. And he’s greedy.

So hopefully the mulberry will have a chance to get away before he bites any more branches.

My other big job was to lift all the dahlias in the potager, remove them from their pots, and store them upside down in the potting shed.  (You have been spared more thrilling shots of brown soil and pale tubers.)

I grow them in containers as the mole rats find them a perfect juicy tuber treat.

I didn’t really suffer too much damage this year thank goodness. But I just can’t leave them in the ground until next spring.  And it gave me a chance to be in the same space as Artur, even though he was working hard on his sleeping habits. He has chosen the potting bench and my favourite kneeling mat. So he is waist high for pats and cuddles and he can squawk and growl when I wake him up with great effectiveness.

I will try and photograph him tomorrow.  My hands were too filthy from all the dirt moving to risk a late afternoon shot with my digital camera.