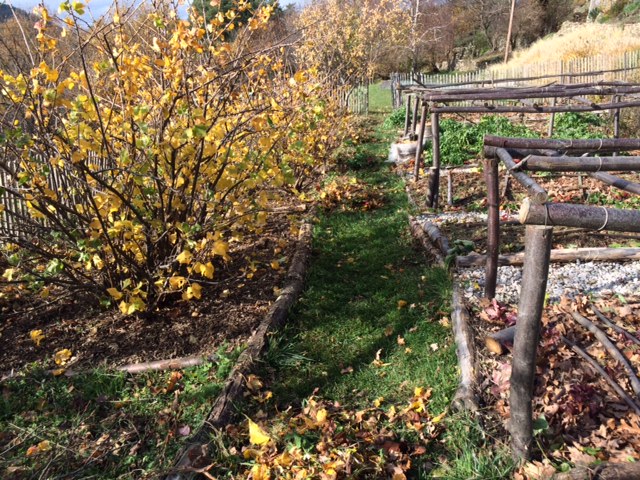 It’s a cheap trick but it works.  If you lose a favourite weeding tool somewhere in the mess of weedings, then you are guaranteed to clean up.

I raked and raked after a furious weeding session in the soft fruit orchard on Wednesday. All in search of my favourite scrapy thing.  What on earth is it called? 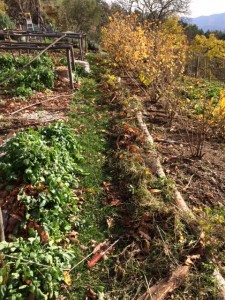 A prong cultivator, apparently. I had to look it up.

It’s the red handled tool in the bottom of the shot.  Right now it’s safely tucked up in the potting shed where it won’t get buried under more piles of weeds.

It was a marvellous pause between storms. And I weeded like a fiend.

The soft fruit orchard is orderly and the compost bin at the far end of the farm is full.  It’s fun piling things there as the horses are munching their way through chestnuts on the other side of the stone wall.  So they have that alert intelligence of animals thinking I have apples in my pockets.

Poor things; it’s only secateurs and gloves crammed there. 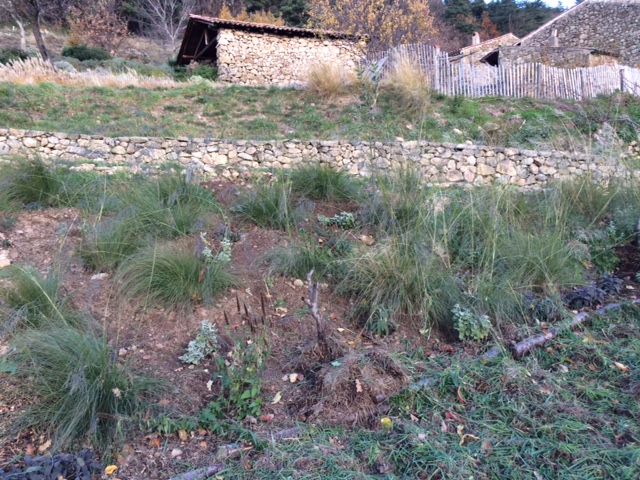 After the soft fruit orchard was turned back into an orderly space – and two mole rat tunnels unearthed. And two very well stuck plum suckers marked out for stronger hands than me – it was on to the orchard bank.

The soil is marvellously soft after our ridiculous storms. We had over seven inches of rain this week. So that meant the poor weeds gave up the struggle without the usual hissy fit.

I want to put all the mulch down this winter – and that means the weeds have to come up first.  This is my huge bank of plants – and I ran out of the good thick mulch in summer.  So lots of annual grasses have crept in between the large eragrostis.  The look is meant to be fluffy and imposing; not a forest of weeds. 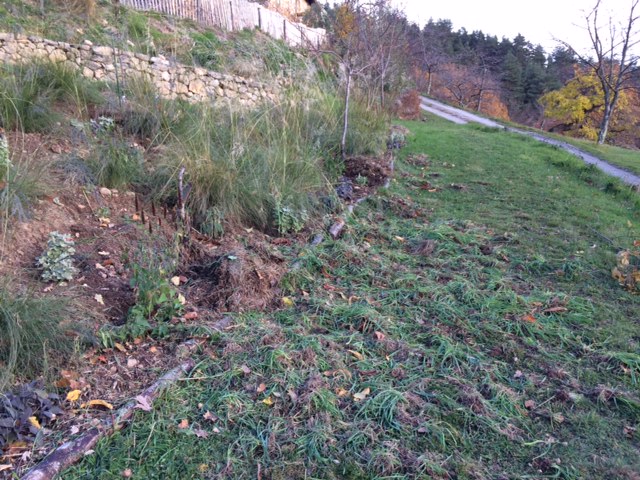 It was actually quite fun – in that ‘how sad I enjoy weeding’ sort of way.  But I ran out of daylight. I was trying to grub out the teensy weeds that have grown up in between the just planted irises – with predictable results.

But another storm was brewing. So I knew I couldn’t get back to it until today. I did rake up mind you.  And added more to the pile where I’m trying to built up the bank opposite the orchard.  Bet you can’t wait to see that.

And of course today was the day that I had contracted the very busy Nicolas to come and do some strimming and pruning. But it was tipping down.

We got as far as walking the course and pointing and nodding in between rain showers.  He has a lot os strimming to do.  And we have to cut down the dead wisteria in the front of the house.  And cut back the huge thicket of New Dawn roses. I just don’t have the gauntlets for that. 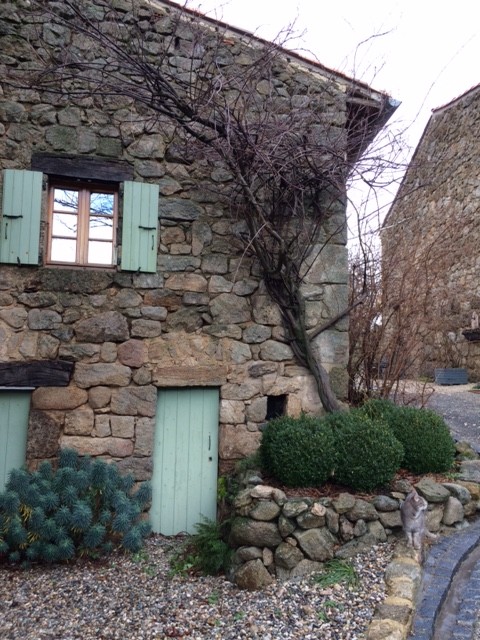 Pictures to come when I go out tomorrow so you can see. (Note Artur bottom right. I’m being stalked.)

But we did get the apples in the orchard pruned.  See, those secateurs always at the ready in my back pocket came in handy.

I would have rather we went more slowly so I could actually work out the difference between buds that will bear fruit, and whippy branches that could be reduced by a third.  I’m a whizz at outward facing buds and the goblet shape of the trees, but the fruiting buds…

But despite the foul week of bad weather, I feel I have made a small dent on my chore list. Here’s the before shot of all the branches I have to chip and turn into good mulch.  The storms brought down many, many branches all over the farm. It was sloshy work in the rain picking them up. But I’m glad they are parked ready to be done.  And I need my wheelbarrows back. 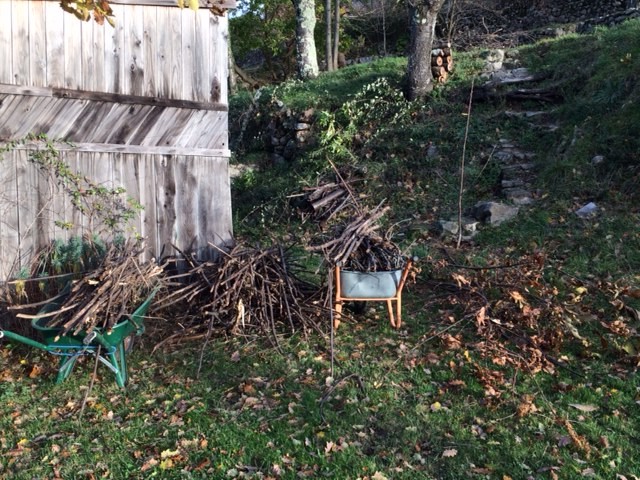 But just pour that coffee, wind me up and let me loose. Good weather this weekend is predicted. Hurrah.