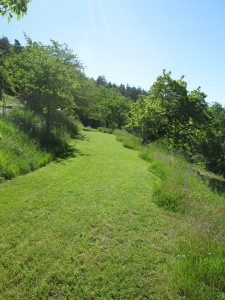 Another early morning start. And I made the mistake of going outside before 7am.  First up I spooked the resident hare in the courtyard munching on a pannicum grass. He’s a huge creature. Could scoff the contents of the potager in one sitting. Cheeky thing to be so close to the house.

And then just as I was marvelling at the sight of the hare, I heard a screeching and shrieking in the guest hosue roof.  And out popped a stone marten. He had obviously been ejected from a nest. So he slunk along the guttering and went into another gap in the tiles.

Goodness, the creatures with which we share farm space.

I didn’t have time to take a picture. I didn’t expect to find anything more exciting than Artur on the pergola waiting for me. He was.

The presence of the hare has had me rethinking removing the nets from the vegetables. He’s way too close for comfort.

So after that interesting start I made my way to town in the hope of not runnng into any more wildlife.  The locals (myself included) are a bit rustic, but quite harmless. If picturesque. 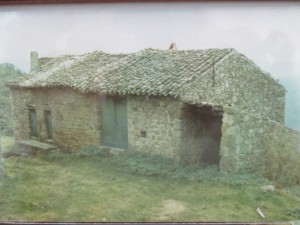 I didn’t have time to do my usual session at the cafe with a hot chocolate and a catch up with my stall holder mates. I zipped along collecting meat from the butchers, fantastic bread, goat’s cheese, and even wine from the garage. (We get it delivered there as no haulier would ever find our farm.)

And I was back and behind the mower before 9am. 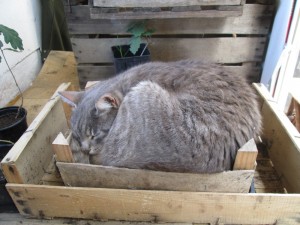 I wanted to write about my unexpected and wonderful visit yesterday.  But it might have to wait for next week when I have time to take more pictures. But here is a hint.

And on that tantalising note, I’m signing off. I won’t bore you with endless pictures of chipping sticks (hours), weeding (hour) and long sessions with Artur (minutes).  But how could I resist this one?

He has crammed himself into the teensiest box in the potting shed. It looks dreadfully uncomfortable, but he was there until the potting shed became too hot and then he flopped about in the shade yowling and mewling if I came close.