That’s a thrilling title if ever there was one. It makes you want to read on, I’m sure.

I’m sitting in the far corner of the Eurostar lounge in Paris waiting for the London train.  Ears plugged into a talking book (David Mitchell’s 18th century drama about the Dutch in Japan) and trying to avoid the couple flirting in beside me. Why on earth, in a deserted lounge, would they choose to sit right in front of me? Tedious.

I suspect they are work colleagues let out of the office for the first time. He is doing lots of hair tossing and inadvertent twiddling with his wedding ring. She is hair tossing in unison and perching yet closer and closer.

If they get any closer they will be in my lap.

Let me distract myself with a shot of rocks.

Yes. It’s done. The tricky job of getting the strange shape of the wall in the courtyard repaired is over at last.  I have been looking at it for years and years. 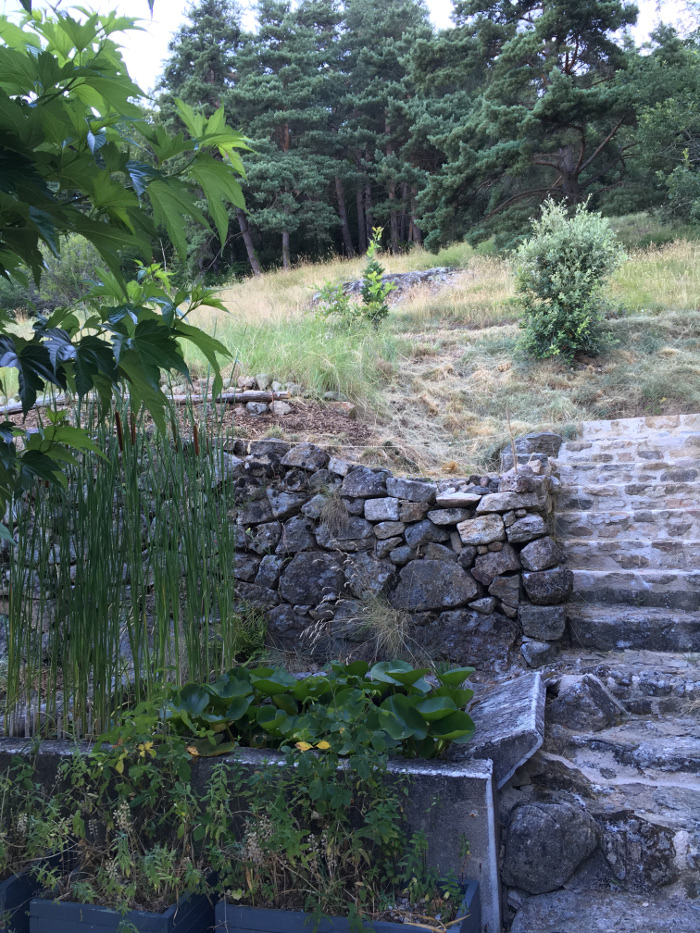 A slope. An alarming slope. I guess it has always been that way as a natural dip in the mountain when it was a spring.

And the corner of the tall wall was bulging after the scaffolding pole was inserted into the rocks during the re-pointing work last year. Was it last year? Goodness I ought to keep up.

I knew that I needed to fix that before adding to the weight of the wall with new stones.

Luckily Bernard agreed to help. I hefted and hauled the rocks close by. I knew he would dig his toes in and dither if there were to be any more heavy lifting. He is not a stone mason. 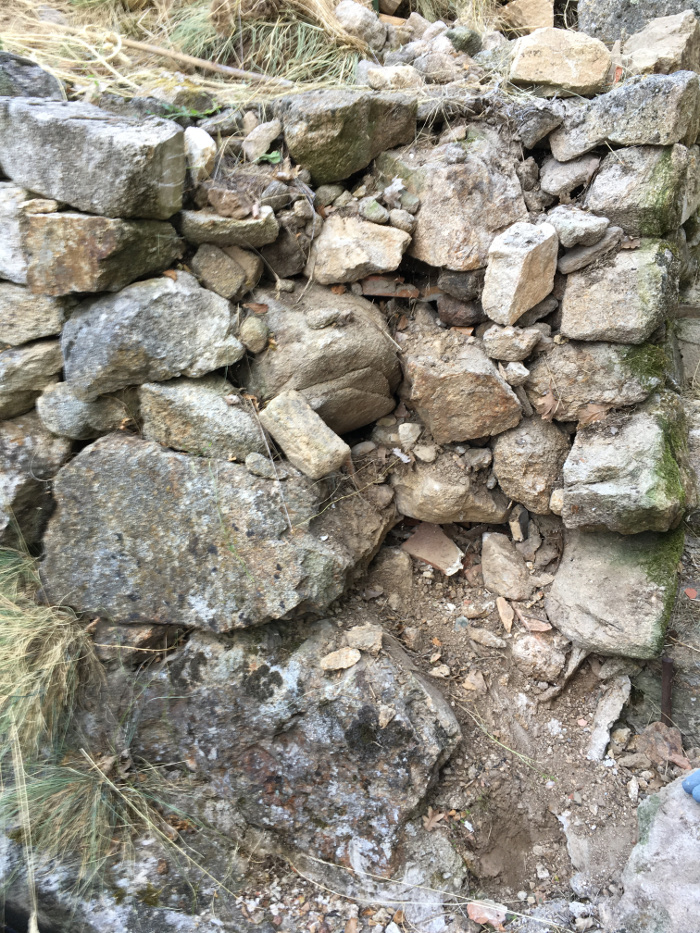 And I am so glad he agreed.  It was like a diabolical game of pick up sticks. What is that game? Kerplunk? Pull one thing out of the stack and the whole thing comes tumbling down. 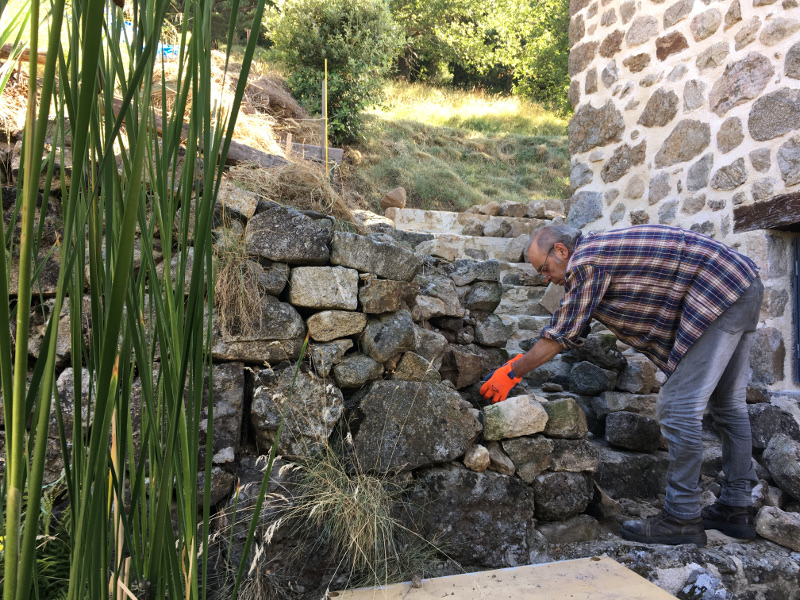 I’m so glad I wasn’t close by to shriek; and be accused of worrying more about the water lilies in the pond than my own personal safety. Or that of Bernard.

As I could do no more than fish the preferred rocks out of the water and right the pots that took a swim, I stayed close by with a busy job of mulching the terraces I have already weeded.

The raid on the municipal mulch pile was most fruitful. I snuck up during the World Cup football match and helped myself to another 20 sacks worth of marvellous weed-suppressing bliss. 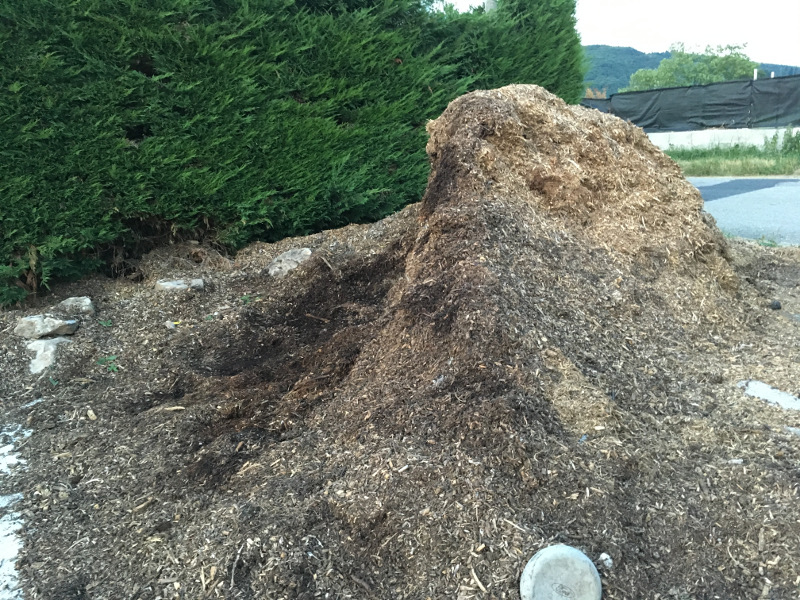 The pile persists. But is diminishing. And it looks like there are a few of us sneaking round the back of the huge pile and helping ourselves. We are like busy mice hacking away at the cheese hoping no one will notice the big hole at the back.

Four hours later and the wall is done.

And my tricky work of filling in the strange sloping gap can begin.  All the weedings from the terrace have been stamped into natty compressed piles. I kept them in the Ikea sacks for a few weeks while I was phoning round begging for help with the wall.

And actually it was a good idea. They were like weedy bricks. Perfect to stamp into place.

I’m not certain about the strength of the new wall, so I’m being careful.

There are three small terraces to try and make it easier to build up the slope. Following the line of the eragrostis curvula grasses already in situ.  Not solid rock, I used some old fencing posts to create the barriers. But it gives me a guide as I keep on filling in the gap with soil and weeds as I work.  All being well it will be ready to properly landscape next spring. 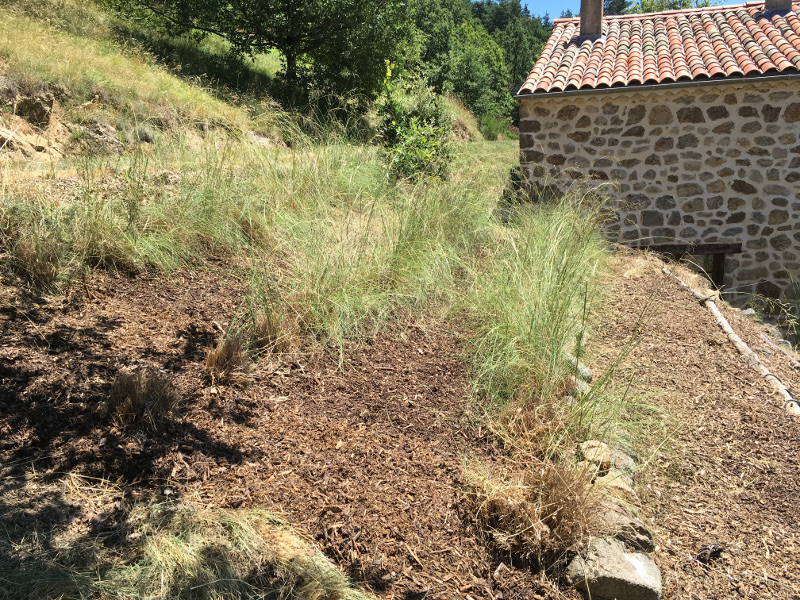 And what a joy that I don’t need to spend ages and ages picking grass seeds out of my socks after mulching.

Most Lady Muck landscapers would order a tonne of topsoil and a tonne of rubble to be tipped into the space. Then a team of navvies would carefully rake and level the site. 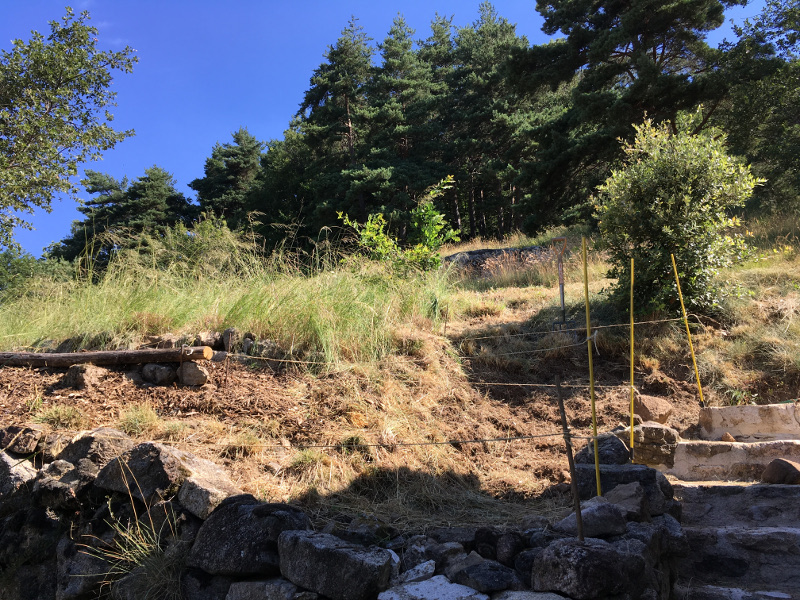 Instead it’s make do and use what’s at hand. So that means a base layer of bricks of weeds. And over the summer I might unearth the weedy unwanted festuca glauca grasses that have invaded this bank on the other side and add them to the gap.

At least it won’t be far to go to fill in the bank. And as long as you upend the plant and pack it with the soil and roots exposed, you get bulk, organic matter, and it won’t resprout.

And now that I have lifted the canopy of the handsome oak tree up here, it is actually (almost) pleasant to work underneath.

And I have always wanted to get rid of the invasive grasses and reveal the gorgeous rock that is being smothered. 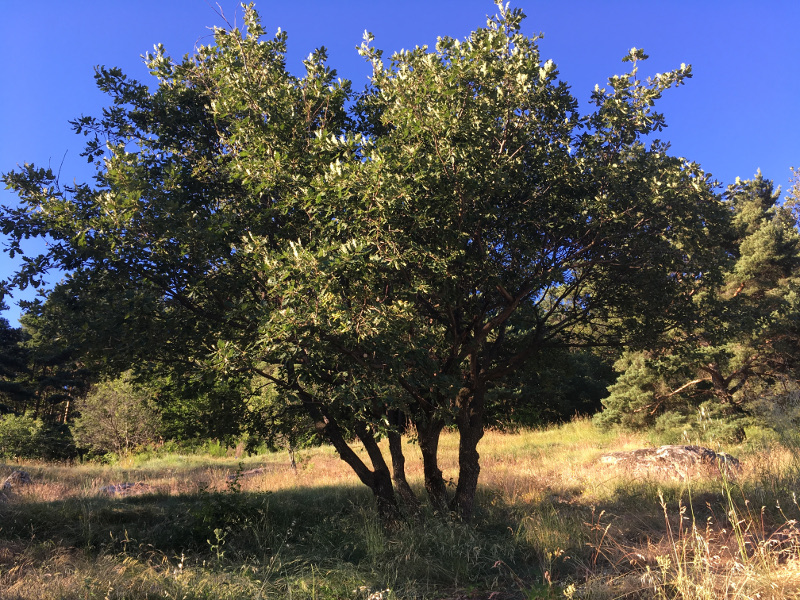