Unwanted wildlife in the potager 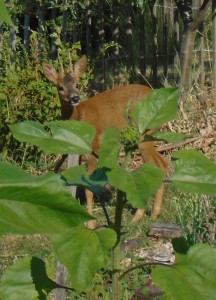 I went outside this morning with the intention of photographing sunflowers. I spotted one that had just started to open into flower.

And as it was one of my self seeded beasts, I was intrigued to see what colour I had.

Instead I saw something else that caught my eye.  Munching.

A deer munching my black currant shrub.  She is a young one – let’s call her Daisy. It’s keeping the tradition of all the other deer on this mountain we have called Daisy.

A bit like all the Blue Tongue lizards that live around my parents’ house being called Boris.

I stood stock still on the steps to grab my camera. But she didn’t seem particularly alarmed. I took shot after shot. And then decided that I really needed to see how she got in. 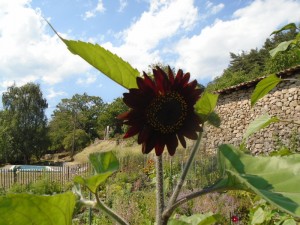 Did she jump the fence? I hoped not, because I can’t fix that problem. But she twinkled off down the steep slope where the fence ends.  So I’ll need to fix that some time today.

The thrill of a rich and varied diet of juicy lettuce, French beans, fruit and just about everything else will be too tempting from now on.

What amazed me was how late it was. She is no dawn raider. I snapped her just after 9am. 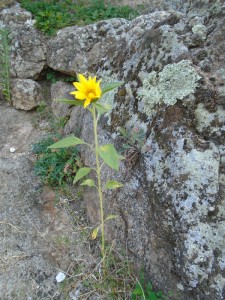 And naturally I forgot all about the sunflowers. So I had to plod out later when I had done my chores and record the first sunflower in bloom.

Well that is if you exclude the sunflower that germinated from below the bird feeder.  It came up in record time.