Tulips in the garden 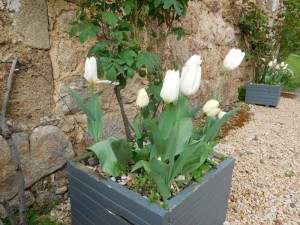 I think tulips have to be the best example of delayed gratification in the flower garden.  You order your bulbs the summer before when the online catalogue tempts you with all sorts of delights.  The bulbs come in October and you wait a month before digging them into the ground.

For me that means a few logical spots – the eleven (golly, that many) courtyard planters, the red pots in the potager, and the barrel in the middle. Plus the lilac bed in the east garden which his a bit forlorn and a few other places I seem to dream up each year. 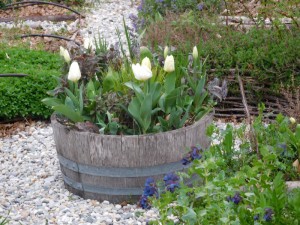 And this month they are all up.  What a treat. I had completely forgotten what I had ordered. I’ve gone for sensible creams and whites.

It suits this garden which is just adrip with white cherry blossom and white Thalia daffodils.

And I am very pleased with the effect.

But the fun doesn’t stop there with tulips. As your last year’s colours have a habit of sneaking up as well. 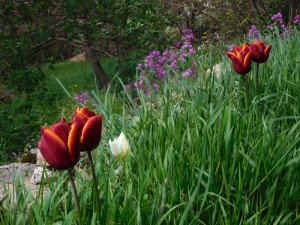 I have interlopers. Some bright red ones from last year’s planting scheme are makng a surprise return.  And the brooding dark orange Abu Hasan’s from two years back are here as well.

Tulips really are an annual frippery for me. I am stunned to see them back. 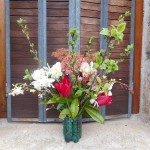 And the record for startling returns has to go to the pale mauve and white tulips in the lilac bed. I planted these five years ago.

And three or four make their annual surprising emergence under the lilac tree. 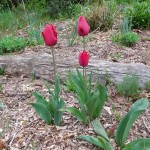 What are they called you ask? I wish you wouldn’t. My tulip lists is back in London and an internet search w 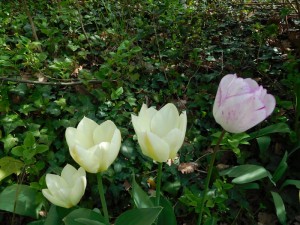 as a spectacular waste of time. I had thought they were called Maureen. But I may be mistaken.

Andrew will know.  I must ask him.

The most surprising tulips are the ones I planted in among the soft fruit bushes in front of the potager.  You may recall I had a few left over tulips and stuck them in these newly weeded beds. 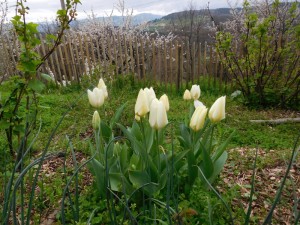 And then a few hours later I dug them back up when I realised they were slap bang in the middle of a mole run and hence delicious winter fodder for my favourite garden pest – the mole rat.

So I replanted them in large pots and it has done the trick.

What a shame I chose such floppy tulips.  The habit looks fine from a distance, but nothing beats the stunning form of these white triumphator tulip which have come back for the second year in the cutting bed in the potager. 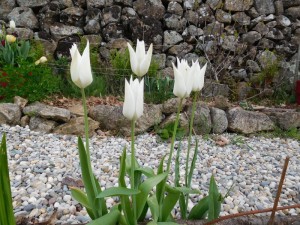 I’m stunned they have survived the predators, and my neglect.

But actually bulbs are brilliant for scatty gardeners. If you can get them in the ground and forget them, you really can’t go wrong.  Remind me to put an order in for a few hundred of these white triumphators for next year.  I might even get a few years value out of them. For once. 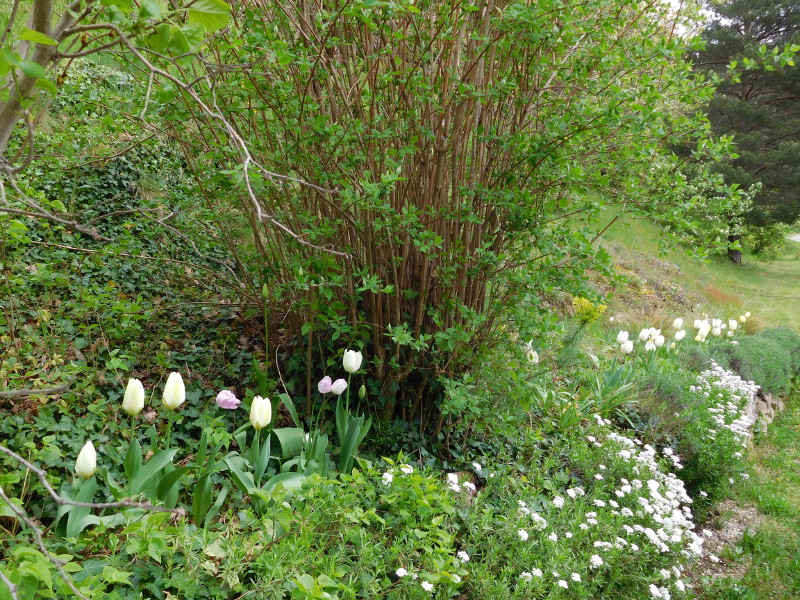 « Succession weeds in the shade garden » Carnage in the asparagus bed