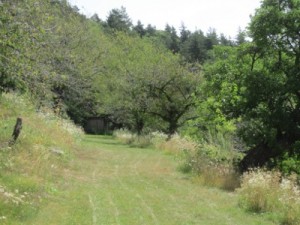 My trainee peasant radar was working perfectly today. I was in the middle of mowing the area around the lavenders when I decided to stop work and come in for lunch.

And as I did so I heard my neighbour’s car zooming up to go in to lunch as well.   One o’clock on the dot.   So I knew my body has adjusted to French country time.

All I need to do is have a siesta and I’ll be set. Actually I don’t know many people who have siestas. They just get on with indoor chores while the sun blazed down outside.

I like to think that this is the last mow of the summer.   I would normally get mowing early before the heat settles over the hills.   But the lower terraces were too full of animals first thing.

I just love how the mulberry is the animal magnet of the farm.   First thing this morning were foxes. A mother and young one. Mother was working her way round the base of the tree eating the sweet fruit that has fallen.   And the little fox was playing in the long grass.

But youth has its advantages. I don’t think the mother would have thought of climbing the tree to get to the fruit. But that is what the little one did. Admittedly the tree does lean a bit but it was an adventurous climb. 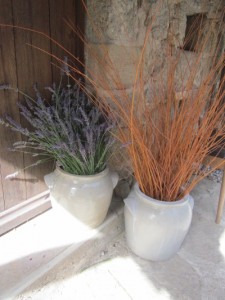 I tried my best to take pictures of the creatures but they were too blurred and hidden by the grass.   And the mother heard me opening the kitchen window wider to take a photo and scuttled off.

I turned away to see if I could get a different shot from my office; and would you believe do the foxes were replaced by deer. Amazing.   They must have been waiting their turn.   Three deer this time and way too skittish to stay long.

But it was a great start to the day.   And it meant I could avoid noisy machines. Who knew what animal group would come next?

Lavender was my main task first up.   Harvest time.   I had the big pot at the front door to fill and I needed a plant which doesn’t require water.   So as I have an indecent amount of lavender in the garden right now I decided to cut as much as I could without having too great an effect on the garden display. 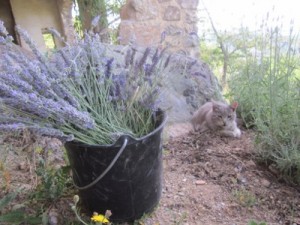 So I set to work with my little side kick.   I am rather hoping that the soothing effect of the lavender oil will make him less grumpy. He has this annoying habit today of demanding attention, purring like a sewing machine, then just as he has made me stop cutting flowers,Â  settled onto my lap suddenly turning round and biting me.

An odd creature. But he finds it a necessary sport. So I comply. And make sure I watch him when he suddenly snarls and bites.   I’m wearing gloves.