The vineyard – farming for fanatics 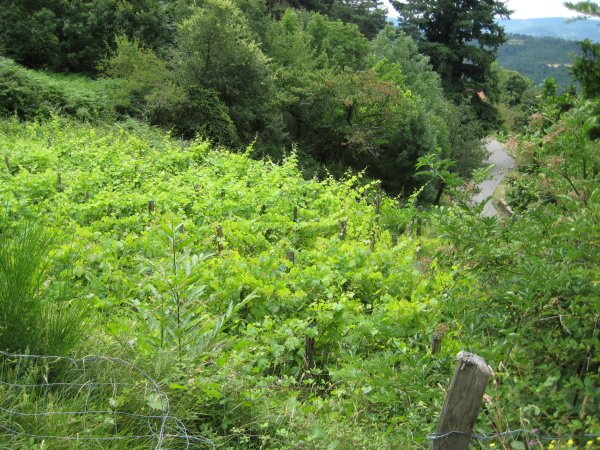 Ugh. That about sums up this part of the farm.

When we bought this property we didn’t really think much about the large terrace way down on the bottom which had vines.

Our previous owner was very keen on All Things Alcoholic.  And he was the enthusiastic planter of these vines.

The terrace is about 300 metres squared; a large deliciously flat space of prime farming land.

We think it was an asparagus field back in the old, old days.  And it makes sense. It is south facing, very free draining and cleared of an immense number of stones which make up the dramatic tall walls around two sides. 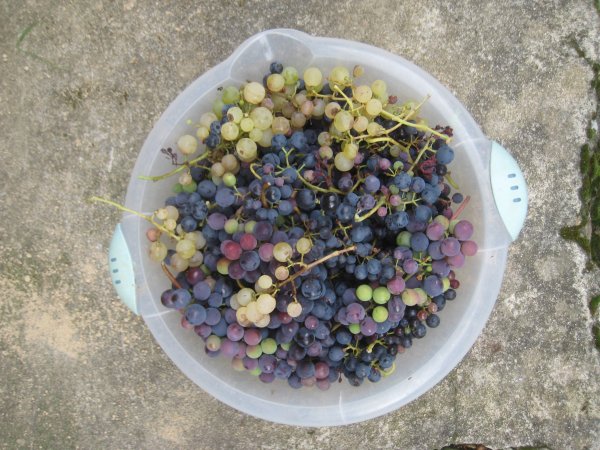 And Peter had managed to hook up a complicated watering system with hoses running about 350 metres all the way down the farm through the forest at the far eastern side of the property.

He proudly declared that he managed to have a few successful vintages ‘of very bad wine’.  He had planted syrah (chiraz) grapes, and a Swiss variety – chasselas d’oré to remind him of his homeland. But we really are way too high to plant good grapes.  The village farmers always had a few rows of vines on their properties for some local wine consumption.  But Peter’s scheme was the largest. 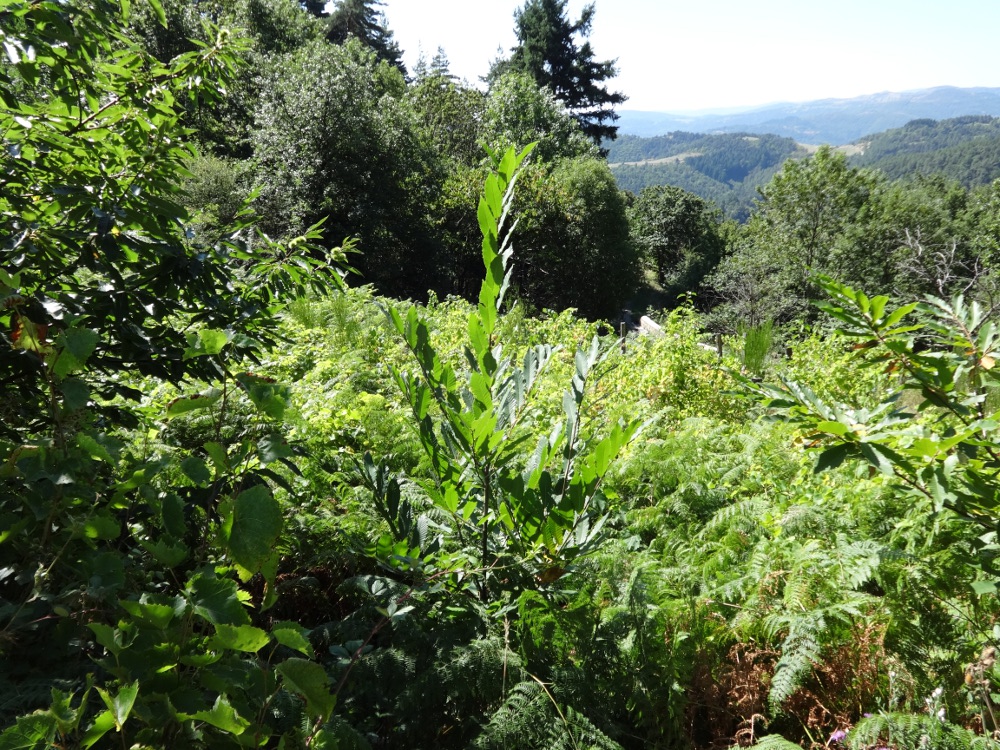 Towards the ends things were getting neglected. About as neglected as the tools, fencing and other bits of detritus I found in the corners of the vineyard the first winter of weed control.

We saw the property in winter when the area is blessedly dormant and almost looks manageable. But even by August in the first year the signs of weeds were incredibly obvious.

This is acid soil and the bracken from the neighbouring neglected land had crept all through the vines. 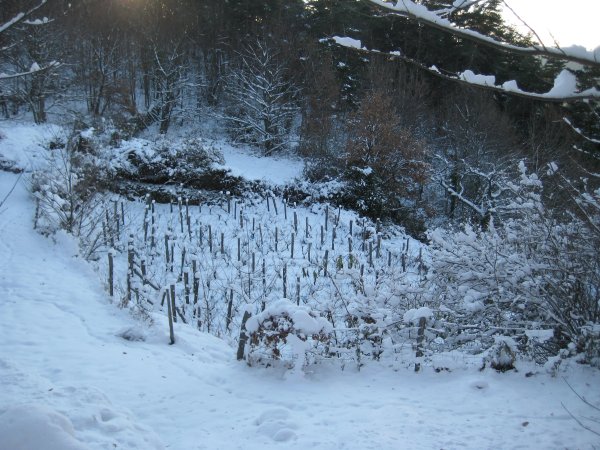 I gave pruning and weeding and all things grape a few years of enthusiastic toil.  But the harvests were already pitiably small after two years.

And then when I look through my files of pictures there is a big blank. I seem to have only gone down to the vineyard twice for two years.

The wilderness years in all senses. 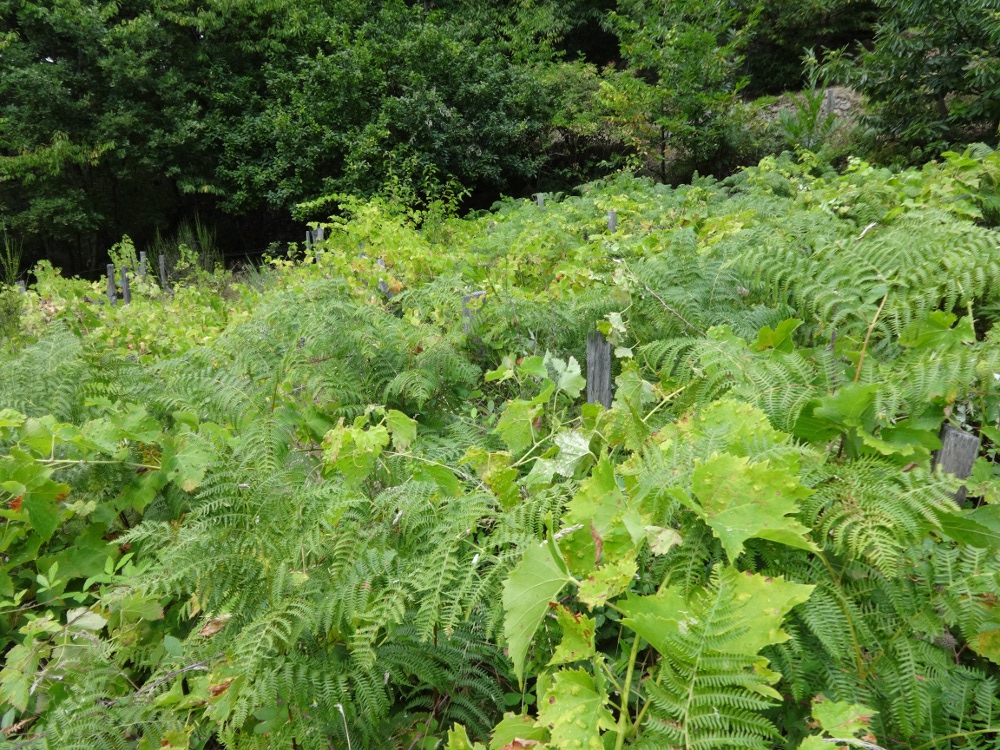 I seemed to have had a rush of blood in 2013 when one of my neighbours suggested he could help to revive the vineyard.  But he warned me that it might take a few years.  The fruit volumes were so incredibly paltry.

But the weeds – bracken, broom, bramble, blackthorn – were growing lustily.

I toiled. I really did. 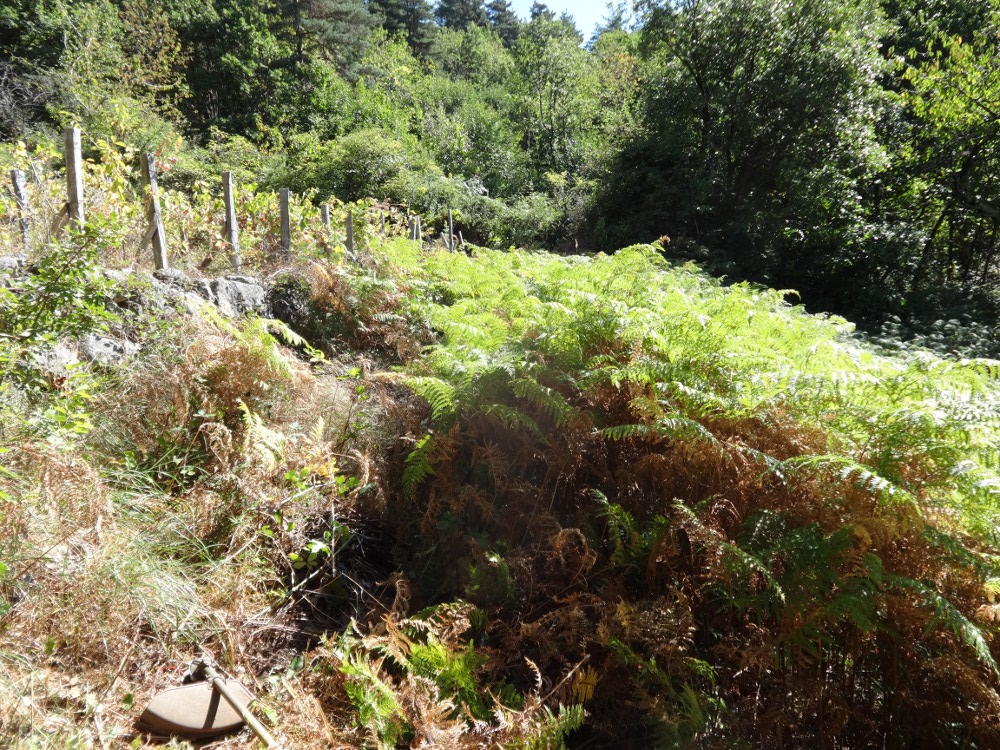 From November 2013 to May 2014 I staggered down the steepest of slopes (the steps had fallen away) and cut down the chestnut trees and the blackthorn and other random small trees.

And then with great care, used my strimmer to go between the rows and try and hack back the wretched bracken and brambles.

Here is a shot of what I called the Fifth Go.

I have about 10 acres of land to deal with on this property in terms of garden maintenance. 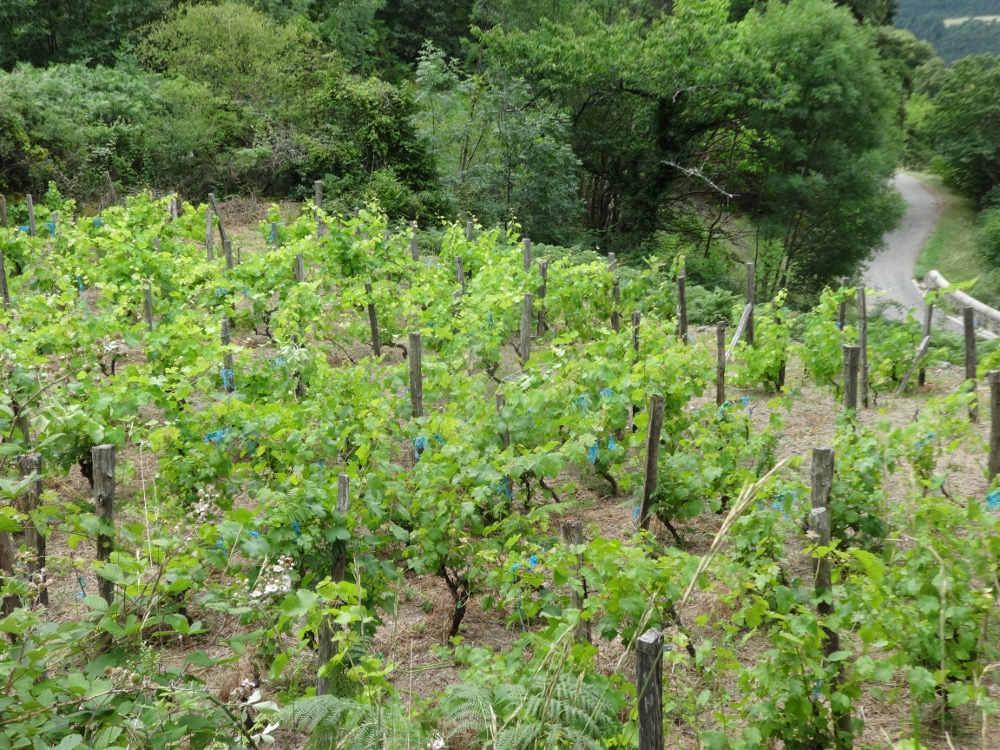 And this extraordinarily time-consuming job was frustrating.  Especially as I had no success.

Well a little success. But the bracken came back and back.

There is an old wives tale that says if you cut the bracken in spring when the fronds are just appearing, and then again when they try to grow back out of the ground, you kill them forever.

I may feel like an old wife after all this physical work, but this is definitely a tale.

By the summer – after I realised that only about four of the hundreds of vines had actually fruited – my mind was made up. 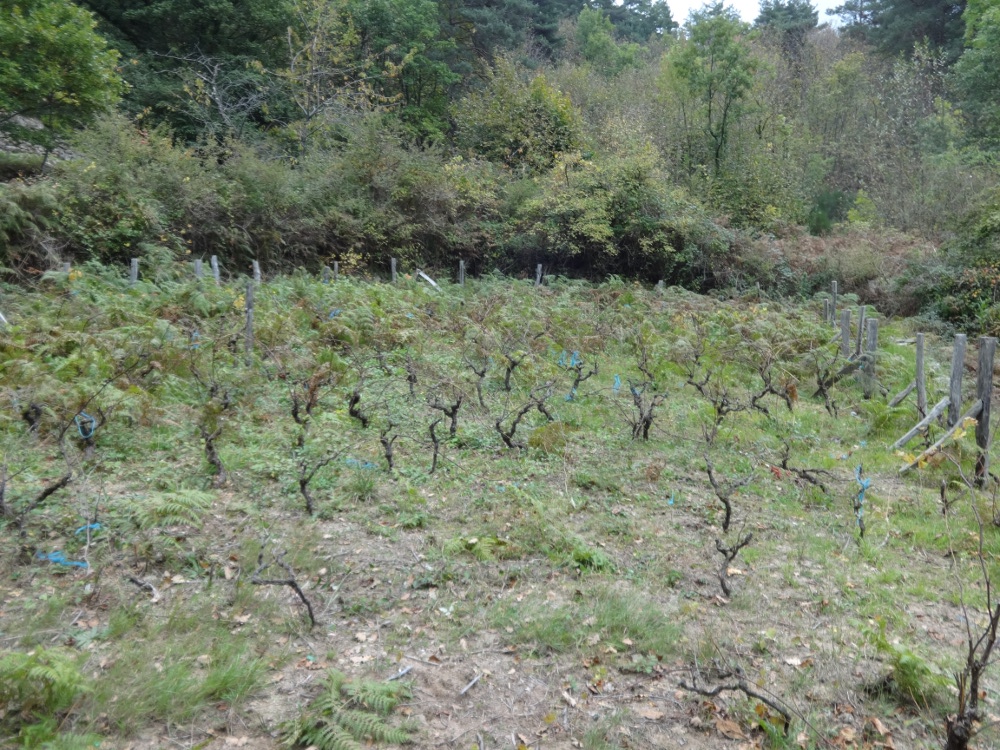 Eight years ago we thought this bit of land would be perfect as an orchard.  And I have decided to make good that original thought.

Only very fanatical winegrowers will put the work into growing grapes in such an inhospitable spot. 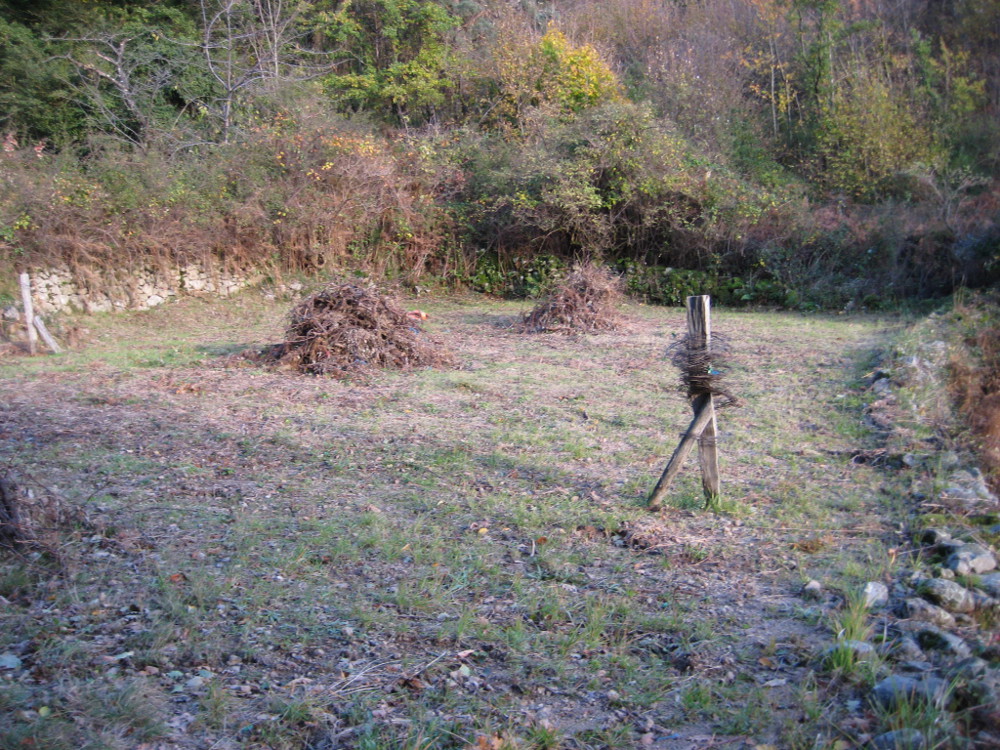 So I booked up the lads to help me dismantle the experiment.

Manu hauled out the posts, Nicolas grubbed up the vines.

And we had a mighty conflagration to celebrate. And believe me it was no easy task.

But how glorious to be able to strim the entire terrace without thwacking into fence posts and vines and wires. 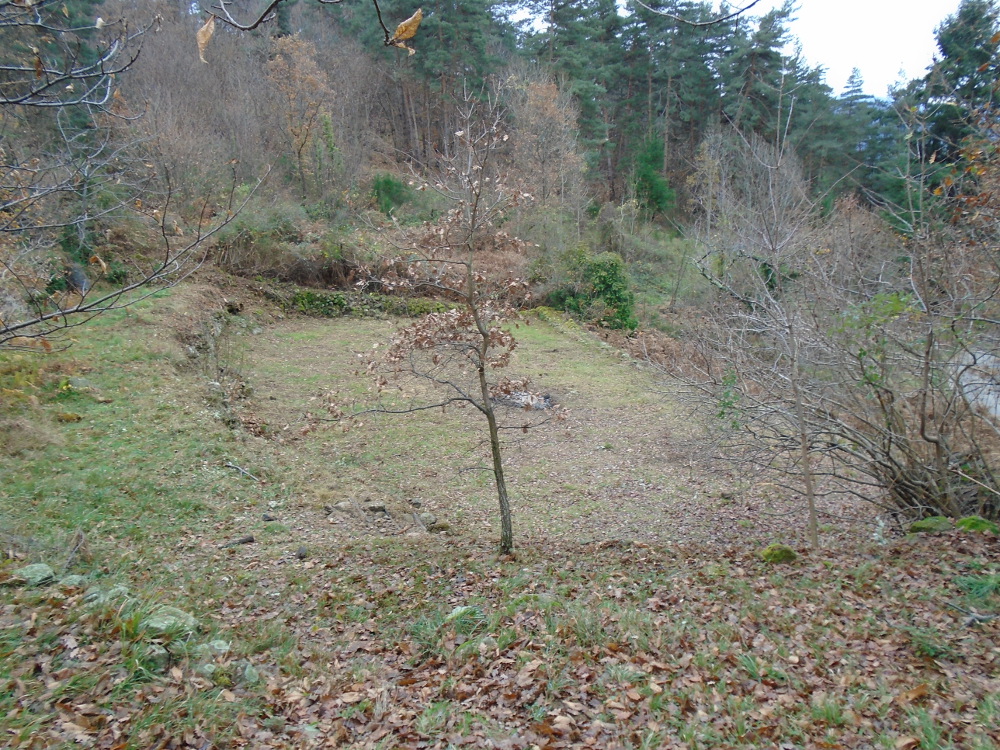 I dug deep into the pockets to get Nicolas to use his strongest strimmer and blade attachment to remove the forest of weeds all around the perimeter.  A two-day job from 830am until dark.

I was just so glad it wasn’t me.  What to some people are ‘weeds’ are actually small trees.  The blackthorn was creeping in on three sides.  The brambles had scrambled up and through the escaping and well established elderflower trees.

But now that it is done I can gaze and gaze at this bit of fascinating potential.  Thank goodness for winter when things stop sprouting.  I am going to leave it fallow for a year. 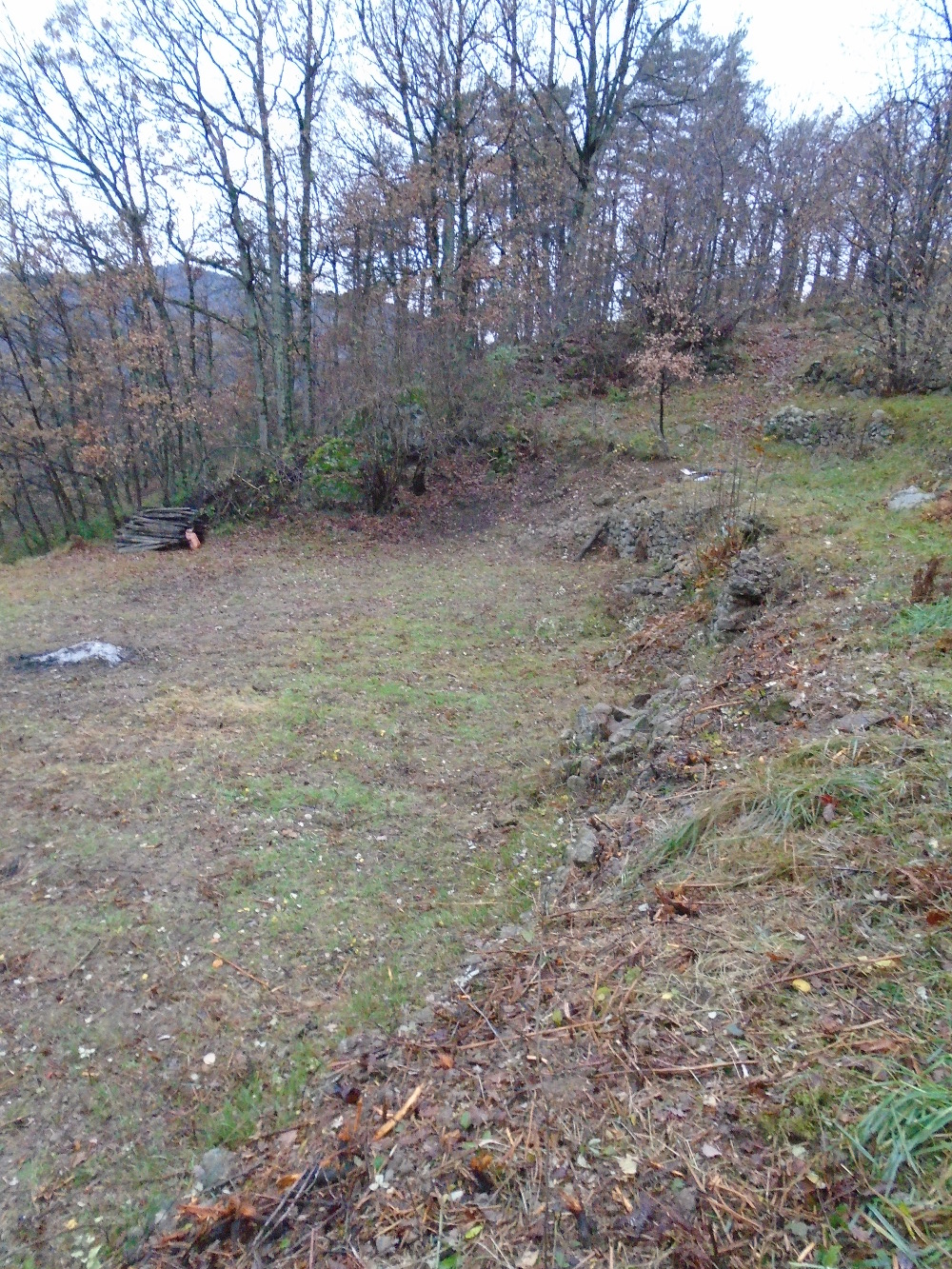 I need to find a rotovator to get the lumpy land smoothed out and cleared. No one has one to rent or to lend at the moment; but I am working on the local farming community with pleading looks and jam flavoured bribes.

And then I will sow the entire area with grass seed and have a smooth terrain.  I can now twinkle down the newly constructed steps with my lighter strimming machine and keep things the way I intend.  Wish me luck.