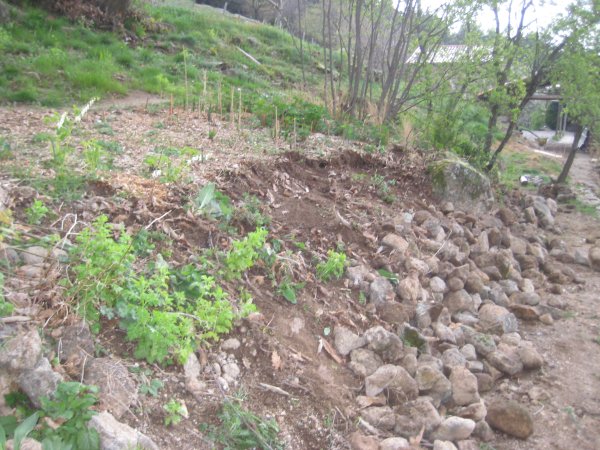 Green walls are all the rage in urban settings. But you can achieve a similar effect in a sloping bank as well.

This long part of the garden separates the pool garden bank from the shade garden. And has always been problematic.

Which is  slightly more experienced gardener speak for I had no clue what to do for about five years.

Well I did. But I couldn’t. I wanted another wall. This was how I found it back when we bought the farm. Stones and mess and a short but nasty slope. 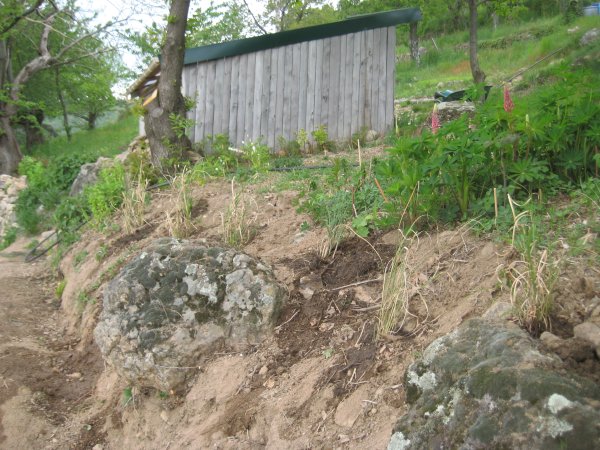 Our stone mason started in on all the more important structural walls that had fallen down on the main terrace below.  And he would take almost a year to make the pool terrace and banks above and below neat, orderly and framed with granite walls.

This little wall was just one job too far. For the bank balance and the increasingly exhausted Nicolas. 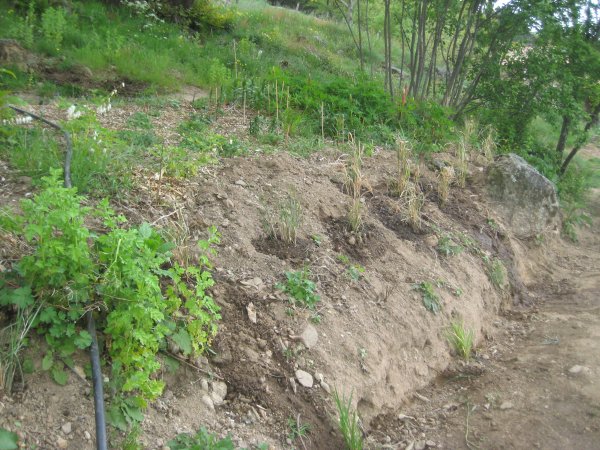 He used to warn me that he would retire from wall building at 40 as it was a young man’s job. (Luckily for this garden I have managed to cajole him into trying a few more – but none of them as complicated and towering as the pool bank walls.)

So I cleared away the stones – which were immediately incorporated elsewhere – and had a think.

If I can’t have a stone wall, what about a green one? In the early years of feverish research I fell in love with all things grasses.  It was the era of the grass gardening movement. Piet Oudolf in the vanguard of this fascinating planting style. 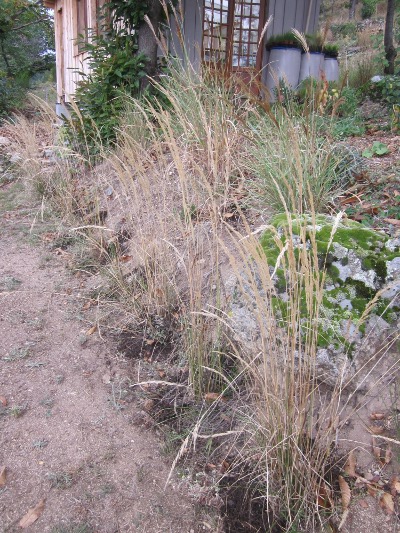 I failed to notice in my drooling over the books and articles was that his schemes were not for we mountain mediterranean gardeners.

I do have a lot of grasses in this garden. You can ogle at the miscanthus and the eragrostis curvula on the pool bank and terrace; they work there.

But on this bone dry slope?  To call it parched was polite. There is a monstrous chestnut tree just to the left of this bank, and three green gauge plum trees to the right. 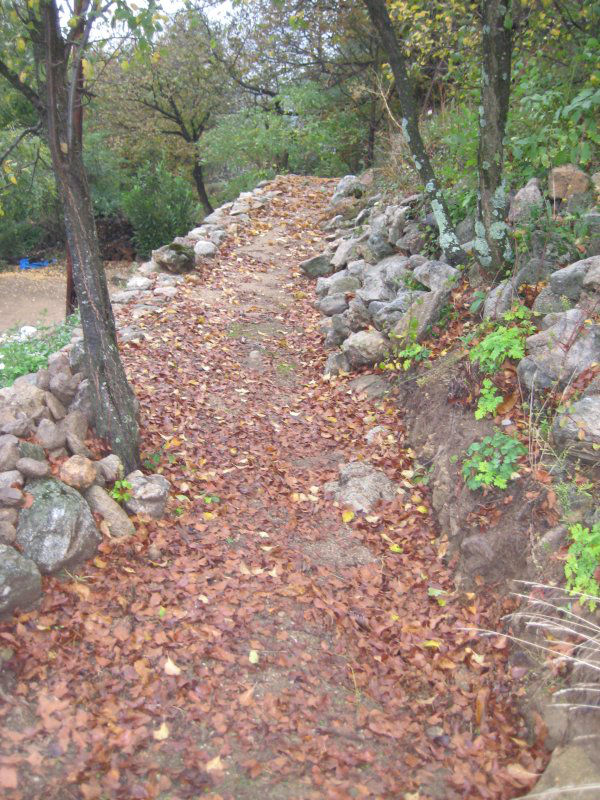 But I saw a hedge of calamagrostis Karl Foerster grasses in a book and I was not to be deterred.

We’ve all done it. And if I could put a positive spin on the grasses bank, I would say they survived. They didn’t thrive. And the only thing really holding the bank together were 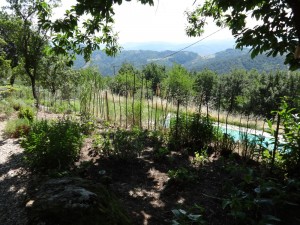 the wild mint plants that crept through it, and brambles which I would cut back but never dig out as I feared the whole bank would fall down.

Two things came to the rescue.  Andrew Wilkie, that visionary eye, came up one day when we were designing another part of the garden (the walnut bank) and he asked me why on earth I had a chestnut fence across this bank. He was politer than that, bless him. In fact he is the master diplomat of garden friends when it comes to poor design.

I will cherish that moment when he was standing in this shade garden, knee-deep in chaotic planting, and said ‘it will be really great to edit this bed’. 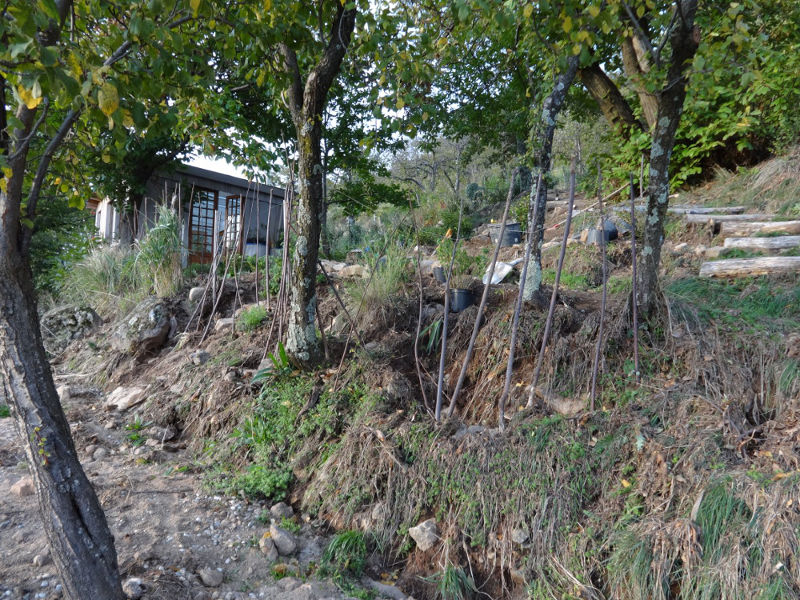 And it taught me a brilliant lesson. Looking at the garden from different directions.  As I always walk up the path to the potting shed from the top side of the shade garden, I never noticed the actual shape of the bank from below.

The fence made sense if you never stepped down Alice’s path and looked up.

But, visually, it was cutting the bank and the shade garden in half.  And often in large country gardens, the flow of the landscape is often best when it is not brought up short with inappropriate fencing.  It took me seven years to work this out. 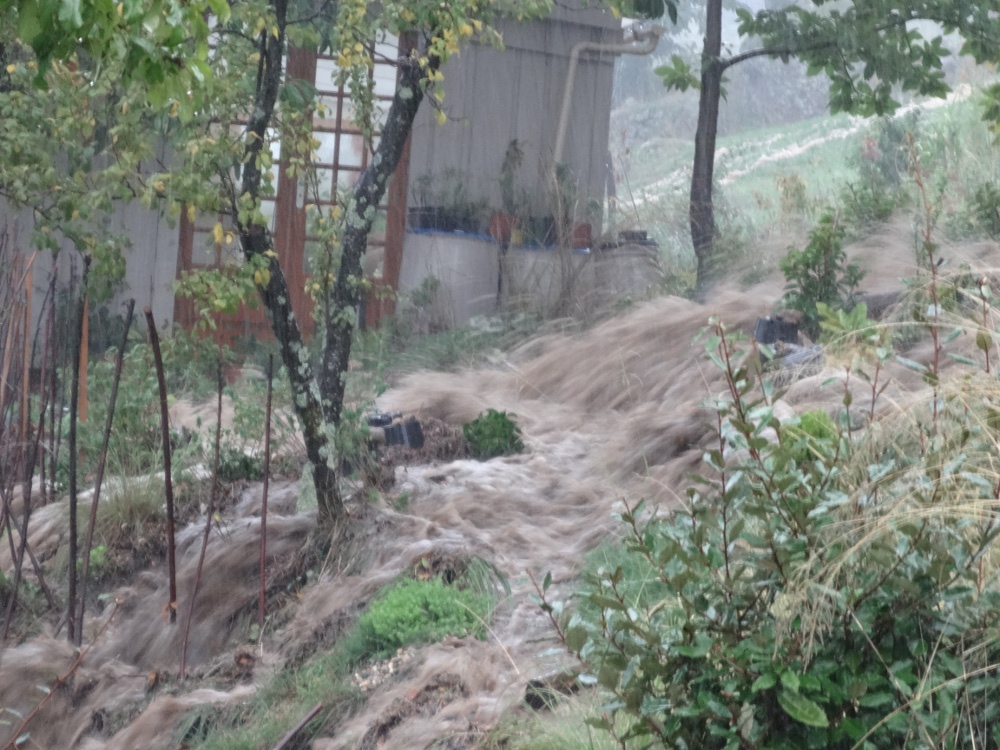 So out came the fence and I began to try and knit together the top of the shade garden and the bank.

And now when I look it is so utterly obvious. But nature intervened in a more dramatic way first.

The whole area was flooded.  A wall of water successfully removed all the grasses, and the top soil too.

What a mess. But it gave me the design kick up the backside I needed.  With a bucket and spade I carried all the washed down topsoil (it was in the swimming pool) back up the washed away steps and filled in as many gaping holes in this bank I could manage. 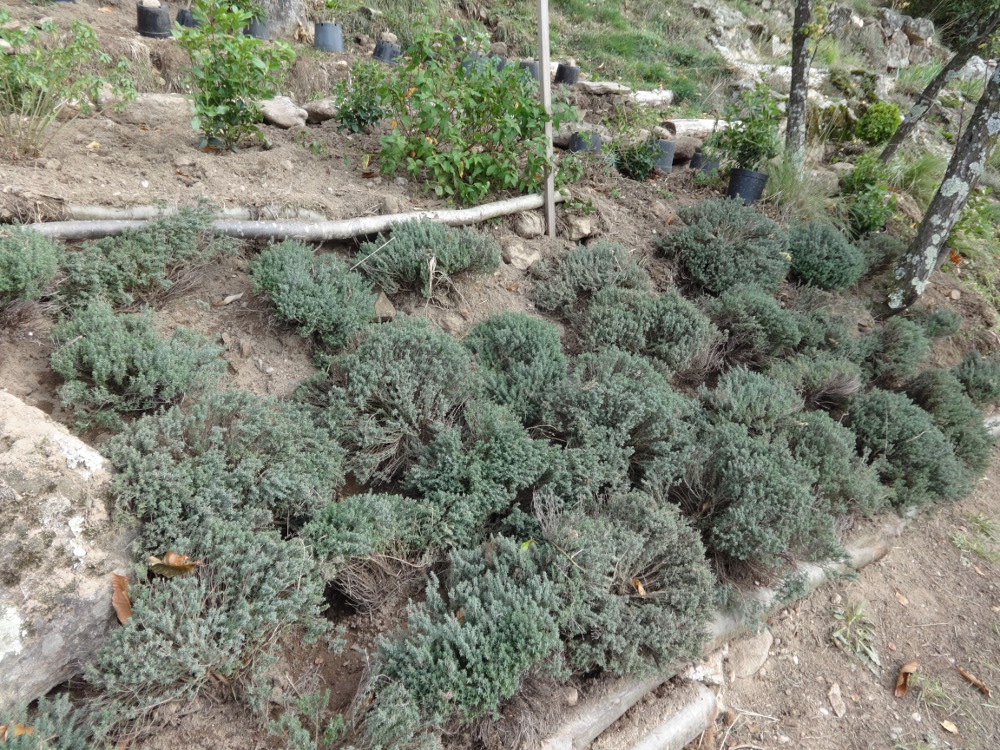 I managed a day and about 60 trips until my will to live was being seriously questioned and my calf muscles, arm muscles and pretend to be cheery smile were aching.

Other people were helping dig out the topsoil from the pool, so I couldn’t let the side down. And actually this small project – relatively speaking – was the first success after the disaster of the flood. 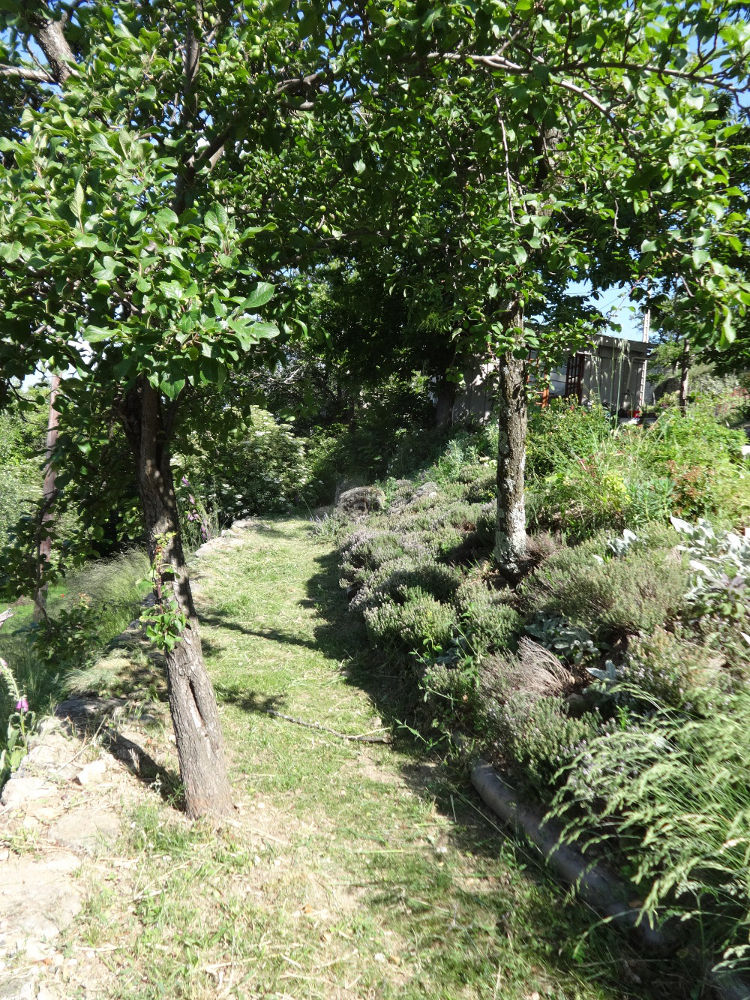 I cleared the stones from the path, added the topsoil, and found a long, sightly curving chestnut tree which I cut down (furious work with a handsaw) and dragged into place to make a base.

And from there it was simple. I had 55 thyme plants ‘lying around’. They were washed away when the plum bank wall came down. So I crammed them into place. And I mean crammed. One thing I have learned about these slopes and walls is you want to have a full bank of plants.

Yes it was instant gardening. But it gave the design coherence and meant all I needed to do was buy a few dozen more thyme plants and my little living wall was done.

I mulch like mad in between the thymes. And I have added some santolina primrose gems which I grew from cuttings. And over time I will add my favourite combination of purple sage, santolina and Stachys.  In a year or so no one will notice the whole bank had disappeared, or that this pleasing thyme bank only came about from two timely interventions.  I prefer Andrew’s design schemes, rather than biblical Cevenol floods.