The potting shed – the heart of the garden

From acorns do oak trees grow. Or in this instance, from a smelly chicken shed doth a potting shed and green house emerge.

When we moved to this farm there were chickens. Everywhere. And as a consequence of two productive vegetable gardens, fencing everywhere too.  Fences to keep the chickens out. Fences to grow brambles which the chickens didn’t eat.

Mess.  And at the far end of the property, up a winding goat track (or is it a mule track? a deer track if we were in Scotland) a shed.  Surrounded by fencing and completely denuded of vegetation. 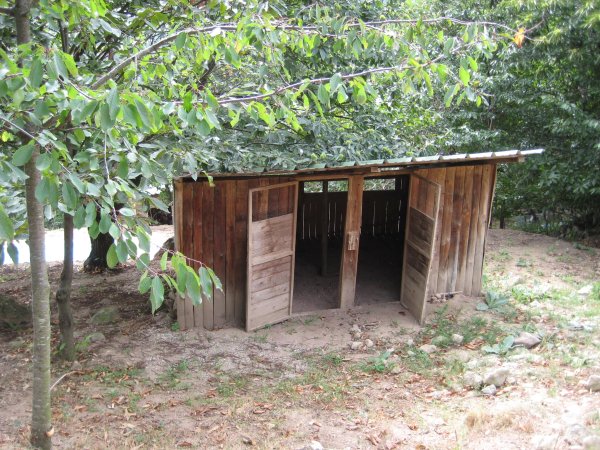 Others would take one look, and smell, at this shed and shudder and look for the kerosene and matches.

But I knew I was going to need somewhere to sow my seeds and grow little plants.  And contemplate my huge ambitious garden plans. 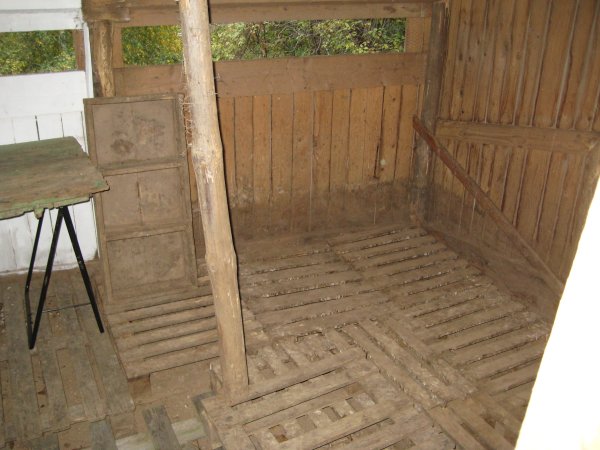 So while Tony the beekeeper was encouraged to spend his entire summer of 2007 strimming endless brambles and removing wire fencing, I got to plotting.  And digging chicken shit. Please excuse my language.

Here is the little shed. Not large.  And not clean. I dug and dug and coughed and choked on the years of manure on the ground, and tried to think happy compost thoughts as I sought the bottom of the building.

I never found it. So gave up and created a sort of flat surface with discarded pallets. I seem to recall I was a great scavenger around building sites in those early days.

There were tiny windows (covered in chicken wire) which allowed me to peer down at the swimming pool on the terrace below.  But it really wouldn’t be light enough to sow from seed. 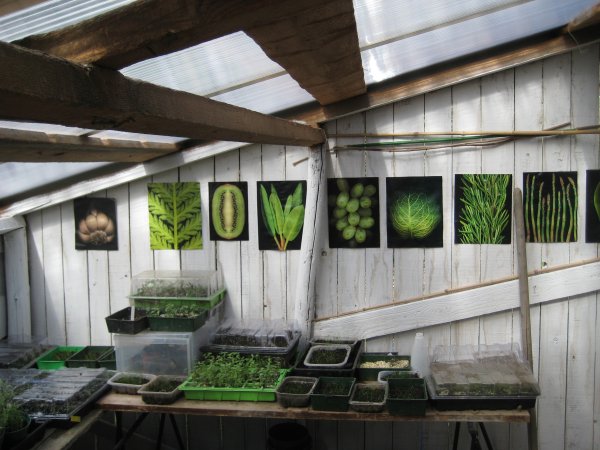 Oh, and the benches were created out of all the old doors that we removed from basements and redundant rooms.

I saw someone on television describing how they had replaced their tin roof with one made from tough but clear polycarbonate and I was launched.

That transformed this little cramped space into a draughty but adequate place where I could start to build my empire of vegetables and flowers and shrubs.

I even painted the interior white and added inspirational plant pictures to urge me on. 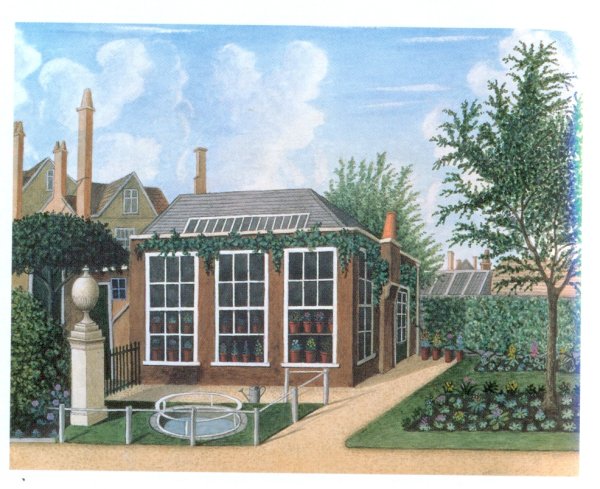 But one thing I could never fix were the lingering parasites from the building’s previous incarnation.  Mites. Itchy little critters who would drop onto my as I worked from the wooden beams.

I came up in angry lumps. Weekly.  My mother gets attacked by tick larvae in her Sydney garden, and we would both share our tales of woe and welts.

It was dispiriting and I fell out of love with my little shed.  The only thing that cheered me when I plodded up the winding path was the chance that wild creature called Artur might be sleeping in a corner in the sun.

He was quite a savage beast in those early years. Timid as can be. And very quick to take flight. But if he was snoozing on a soft net in a corner I could creep in and get a quick pat and chat before he slunk off.   Once the chickens had gone and the place was toasty, he did rather claim it as his daytime home. 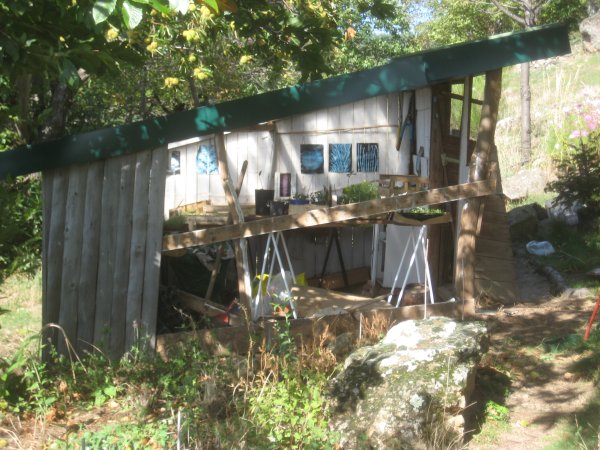 But I was planning a major disruption.  The shed had to be replaced. I found an illustration of a little garden shed in a design of a garden from 1805 and the image stuck.

I fancied a building with windows, the same polycarbonate roof for heat and light. And with brand new timbers, so no parasites and maybe something a bit roomier.

I started visiting the reclamation yards in Valence and bought up cheap double glazed windows.

You have to understand that planning permission is utterly refused for large garden structures.  But our previous owners had been enthusiastic rule breakers and had built not only this shed, but a stables and a rabbit shed as well. 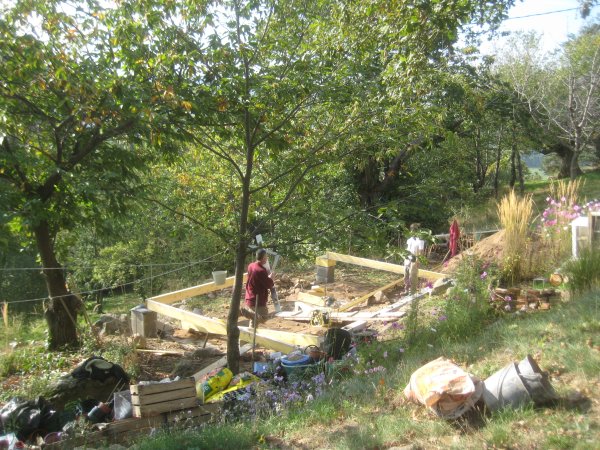 I was merely tearing down the chook shed, and putting up something new in its place.

Hah. The best day was when I put a sledge-hammer to this old mite infested structure.  I seem to recall I had screaming sciatica at the time and had to admit defeat and call in some hefty lads to tear it down.

And the second best day was when I stood in the empty space looking at Dario the builder and telling a filthy lie.

He had his tape measure out and was plotting the foundations of the new shed. ‘How long do you want this building to be? What was it before?’ 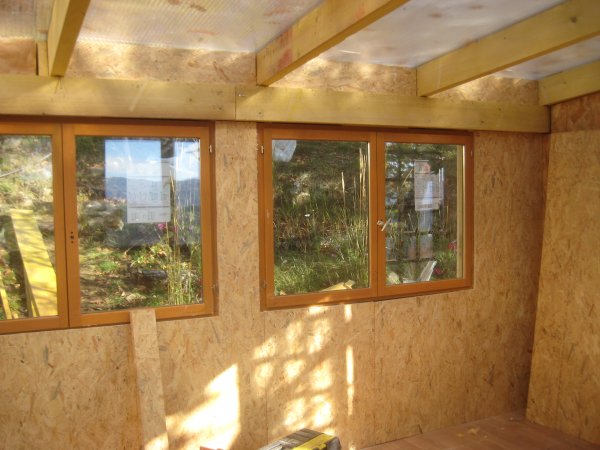 ‘Oh six metres by four I think’. (Just squeaking under the absolute limit for temporary farm structures in this part of the world).  ‘Yes, let’s go with that.’

So in once sentence I tripled the size of the building, cost myself a fortune in timber, and incurred the wrath of my only neighbour. And was the mockery of the village on the other side. 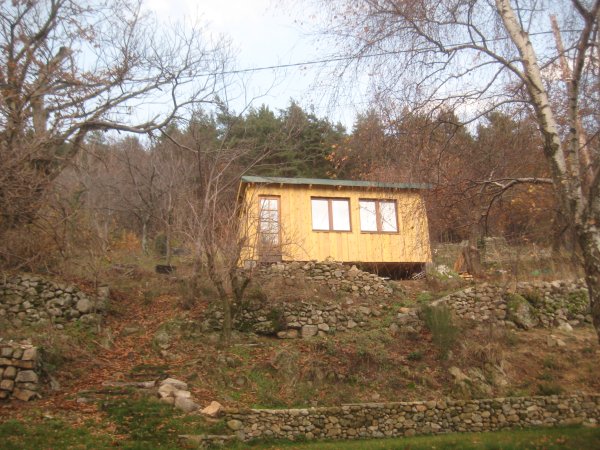 And as I used treated timber in its construction it was bright yellow for a year. Bright yellow. Not only could you see it easily from across the valley in winter, you could probably have seen it from outer space.

I was in so much trouble. I was teased. And as penance for my cheating deed, I am obliged to supply the village with bulbs every autumn to prettify their landscape. For life.

I was a model neighbour and citizen up until them.  I am also obliged to grow flowers for the village window boxes every April to make up for this visual carbuncle.

But now, a few years on, you hardly notice it. Honest.  And I have been forgiven. 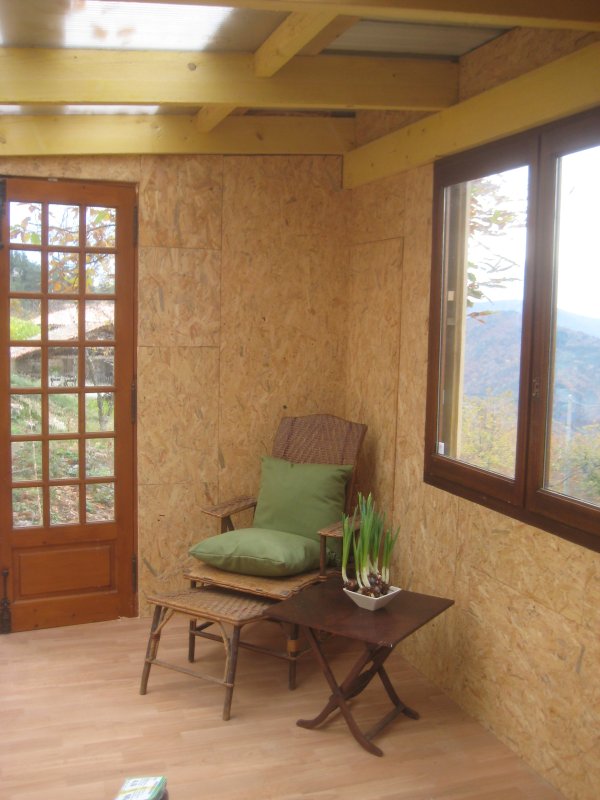 And inside the wonderful potting shed I could begin.

First up was a lovely rattan chaise longue I also found in a junk shop.  That went in first. And it took a morning for Artur to work out that it was the perfect place for him. 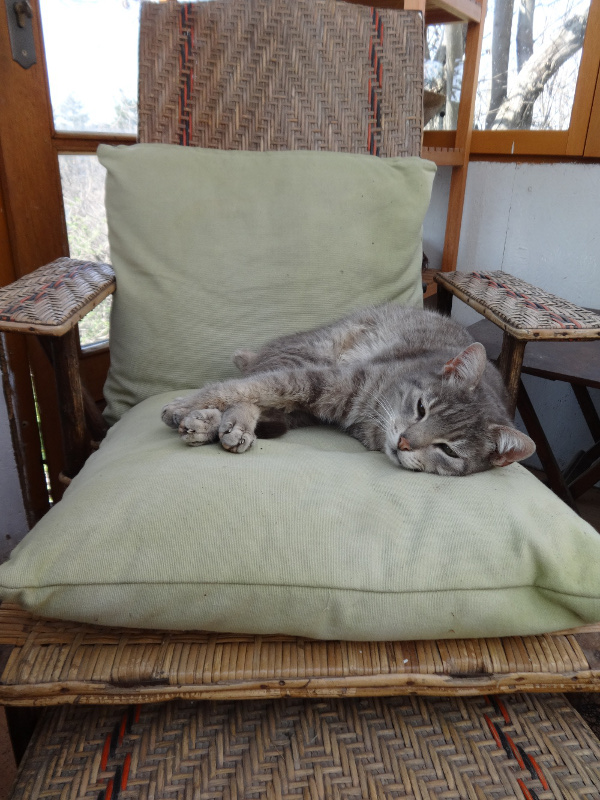 There are days when I wonder just who’s building this is.  He claims it for his own. There are boxes he loves, chairs he refuses to leave. And when it is getting packed with plants, he will blithely step between the trays and sometimes plonk himself down on a soft cushion of just emerged seedlings. 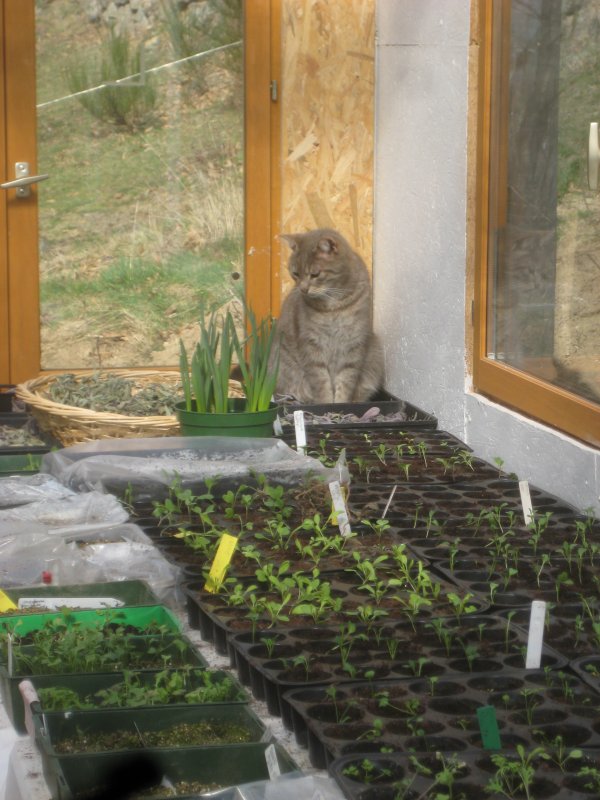 I get cross. He glares and then looks utterly winsome and I give in.

So I’m afraid if you look up any old posting about the potting shed, you are bound to get action shots of a sleeping cat.

You also get actions shots of hundreds and hundreds of trays of seedlings and plants.

Everyone who grows from seed will describe that same sensation; magic.  The silence, the purpose, the simple task of filling the trays with compost, sowing thinly, labelling, covering and placing on your potting benches to await germination. 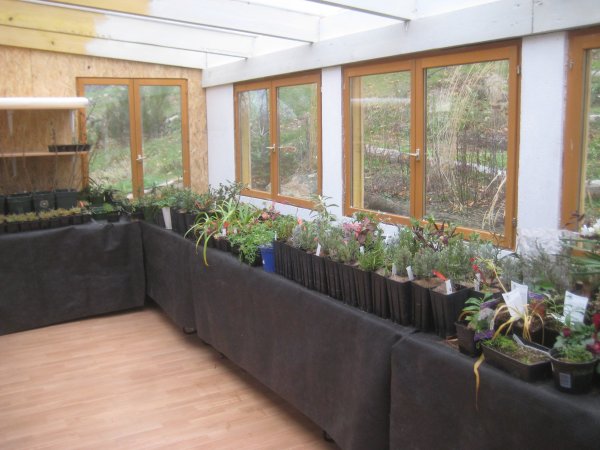 Because I am obliged to travel to London every month I do get anxious moments when I realise I am abandoning my baby seedlings for a week. But I am blessed with kind friends who will come by to help out.

I grow for everyone. Flowers for the village, extra brassica plants for neighbours, and flowers of course for my friends at the market. 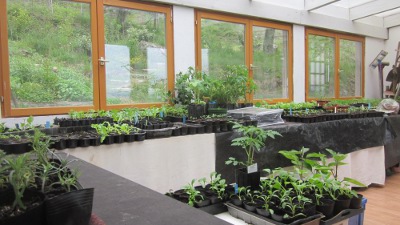 During my busiest time I am obliged to drag out a few trestles and doors and place a table all the way down the middle of the potting shed. There just isn’t room on the staging. And this is a large space.

And the polycarbonate roof is perfect for growing early in the season.  Things get a bit too hot here by June. But by then I will have climbed up a ladder and covered the surface with a greenhouse shading solution.  That makes the polycarbonate opaque. 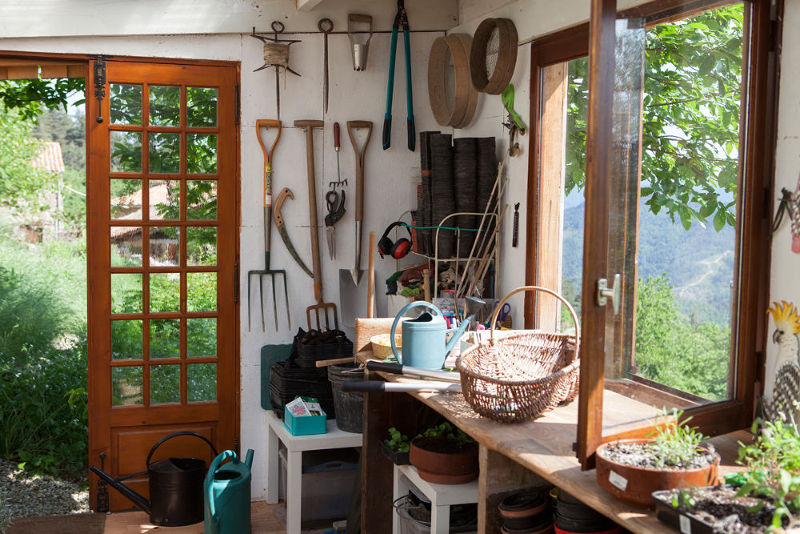 But actually most plants are out in the ground by then. I just keep a crop of brassicas under nets to use as supplementary greens.  And the eragrostis grasses crops I’m still churning out by then.

I have planted lots of virginia creeper around the exterior walls. Especially the one facing my neighbour’s property.  And eventually this will clothe the entire building.  The plant doesn’t come into lush growth until late spring so the timing could be perfect for getting crops up and growing in strong light. And then having it coolish and shady for the rest of the season. 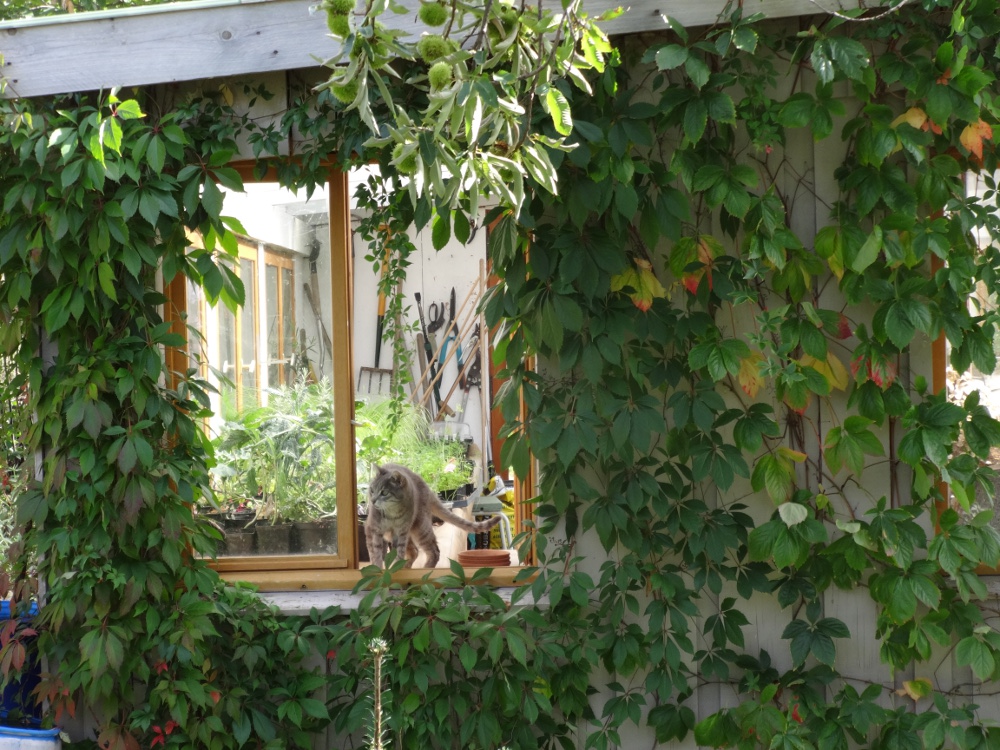 I haven’t consulted the cat about this shady change. But there are limits to my slavish devotion.  He has his cat flap. He has endless snoozing spaces (cashmere lined with old jumpers, no less), he will just have to perch wherever the sun is strongest.