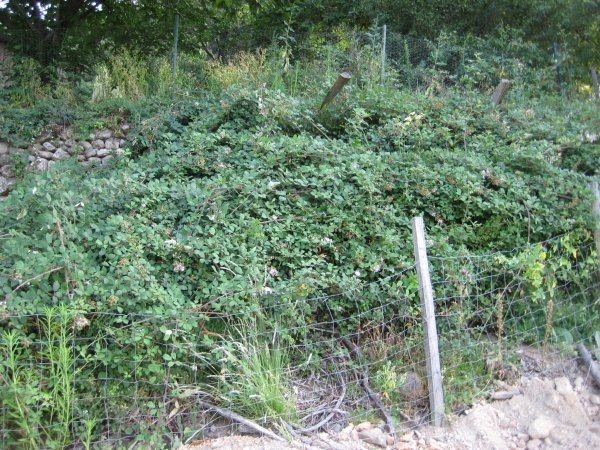 Oh my. What was I thinking?  Why did I pull out all these hundreds of brambles on the steep bank?

Aesthetics for one.  The brambles were hideous.

But there is a hard lesson one learns on taking on a large patch of land. Lesson number one: soil on very steep slopes is absurdly dry. 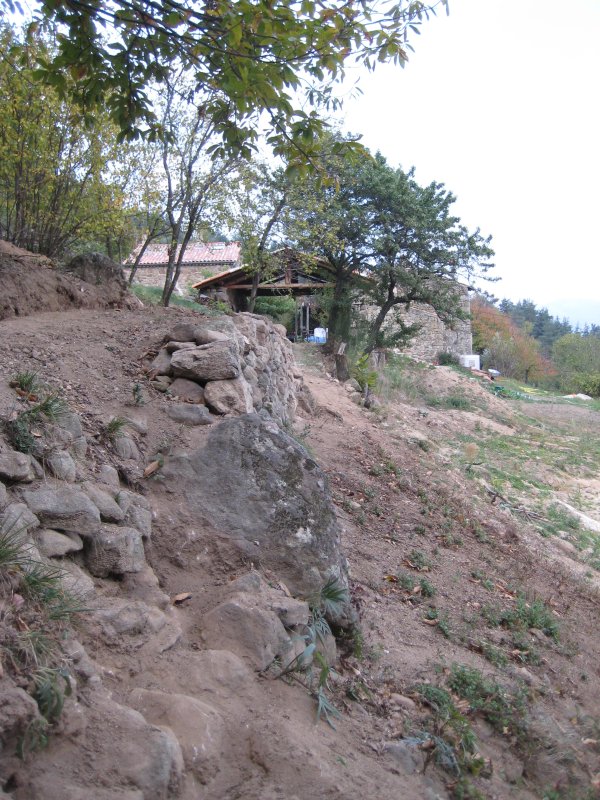 Once the retaining walls were built here, I simply had to try and do something with the space. It was just above the brand new swimming pool so everyone would gaze up at it as they did their laps.

It is about 20 metres long and ten metres high.   And so steep in the top section that you need to hold on to something to stop sliding back down the slope. 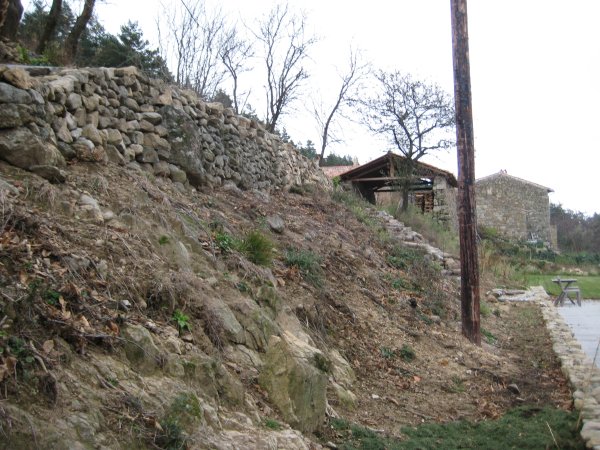 And if you must grab a bramble, you must remember to use thick gloves.

Lesson number three: France Telecom will not move telephone poles, even if they are slap bang in the middle of what is about to be a great garden experiment. 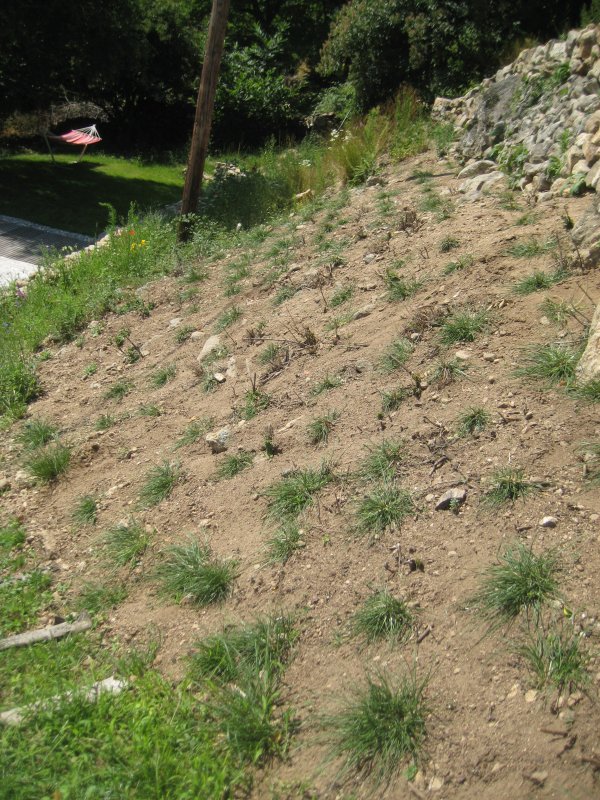 So with all these lessons learned, I started planting.

I had always cherished the idea of a spot of mass planted ornamental grasses.  But I couldn’t settle on the species. Consulting Darke’s Enclyclopedia of Grasses was a drooling experiment in envy and desire.

I narrowed it down to a few Pennisetums (Fountain grass), a Sporobolis (Prairie Drop Seed), and an Eragrostis (African Love Grass). 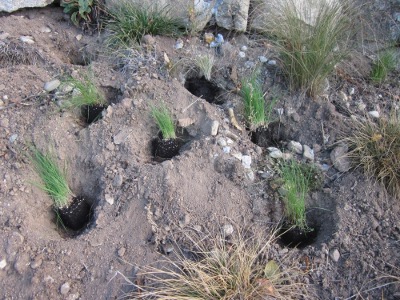 I really fancied the Pennisetum as the flowering panicles are just so pretty.  But they also had to be pretty hardy.

Oh, and I had to be able to propagate them easily if I were going to increase my yields.  So the Prairie Drop Seed was out as I could only find one supplier of the grass seeds and they were slap in the face expensive. 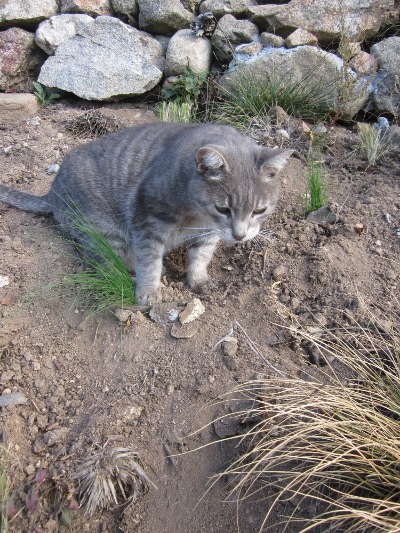 Andrew told me that one of his fellow stall holders at Les Vans market had a few eragrostis curvula plants.  So I asked him to buy up the entire stock and I would see how they would go.

Here you can see the first mass planting in the dust. But I also thought I might try the pennisetums as well.

I bought the pennisetums plants from a very good plant nursery right at the foot of the Vercors mountains on the other side of the Rhone river.

I needed to find someone who grew them hard: outside and exposed to our winters. That way they could make friends with the inhospitable place I was planting them.

In February one year after I planted this bank I lost the lot. 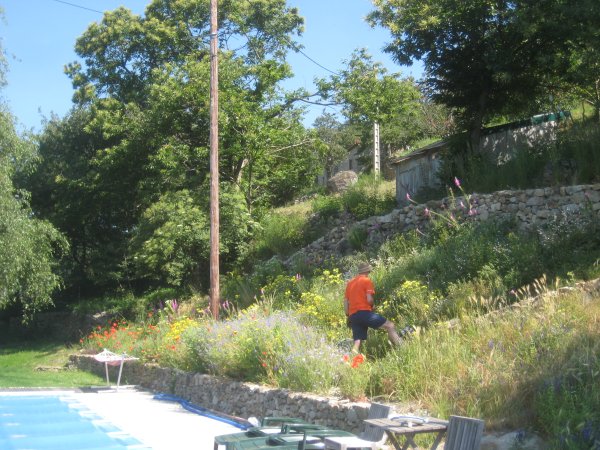 Our weather turned a bit nasty – down to minus 18C with a strong wind. And the grasses just couldn’t cope. Well they might have were they in an ideal garden setting.  But this is dry and difficult already.  And of the pannicums and pennisetums and the eragrsotis, only the few eragrostis survived.

So they came out the Survival of the Fittest competition.  And I was able to easily sow seed from the first autumn flowering.

Planting isn’t easy. Especially when you have an unhelpful helper who likes to sit on the plants and watch me get cross.

And you have to accept that these titchy little grasses are really going to take a few years to get going. 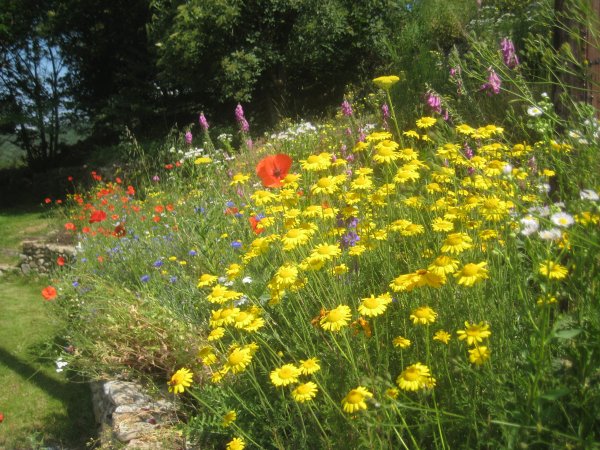 So I had a go at planting a wildflower meadow in between while I waited for the plants to bulk out.

In the first year of casting the seed it rained and rained. It was bliss. The wildflowers were fantastic. Colourful and stunning.

And it was all downhill from there.  The coreposis and the achillea loved the site.  But I didn’t get many poppies or cornflowers in the second year. Annual wildflowers will do that. 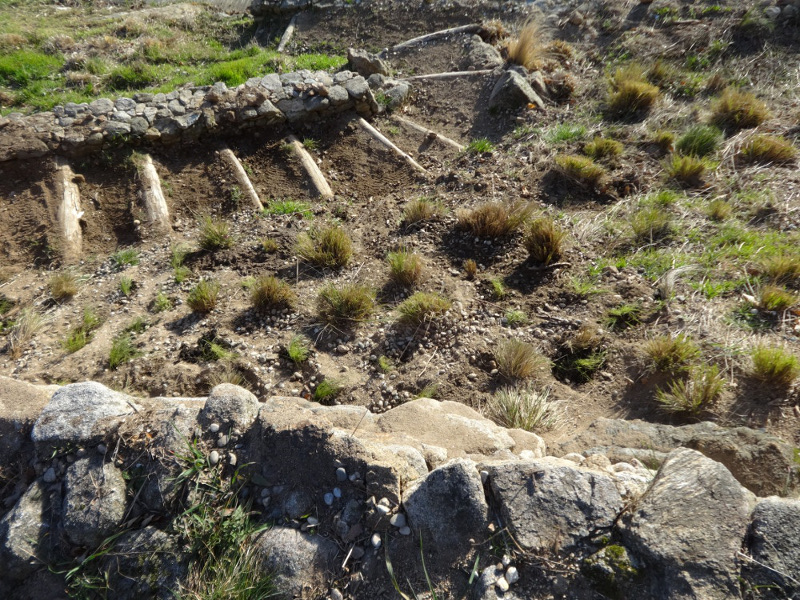 I have since learned that you need to start from scratch and sow again every spring if you want a good wildflower meadow. And the area needs to be weed free.

Instead I took out all the wildflower remnants and cleared the bottom strip of land. The brambles were creeping back. And I had a few rogue nettles that were taking hold. 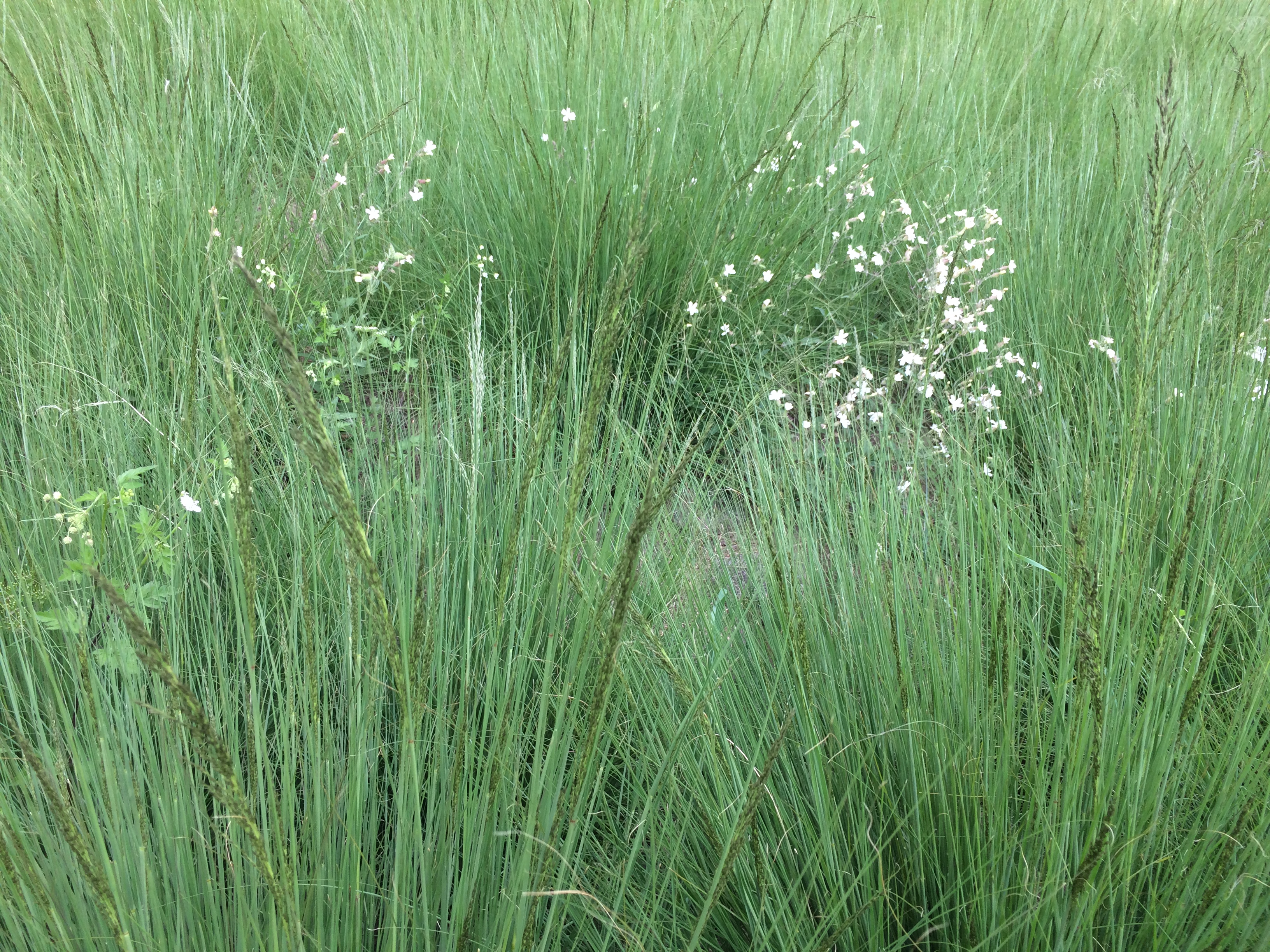 I continued the eragrostis grasses design all the way to the wall. The ones that are encroaching the path were the first I dug up each spring to divide and replant and fill the whole place out.

My plan was to dot in among the grasses more of the verbena bonariensis that didn’t mind the drought conditions.  It was starting to look a bit too blocky and, well, grassy.

I spent ages and ages transplanting verbenas that had self-seeded in the potager and were in the wrong place. 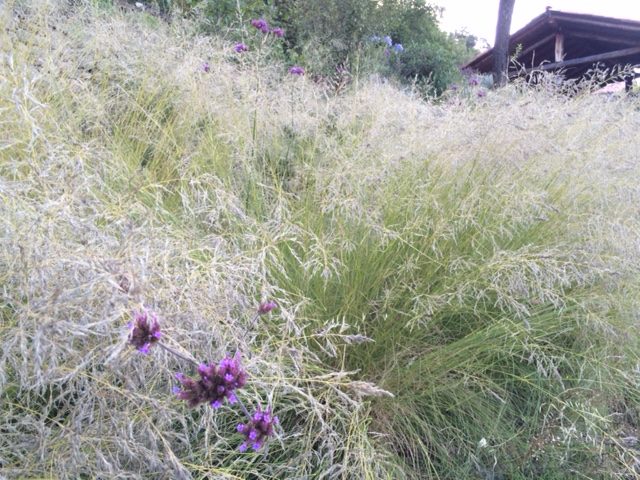 And for one year they did well.  But they just didn’t thrive. I doubt more than half a dozen plants have survived. 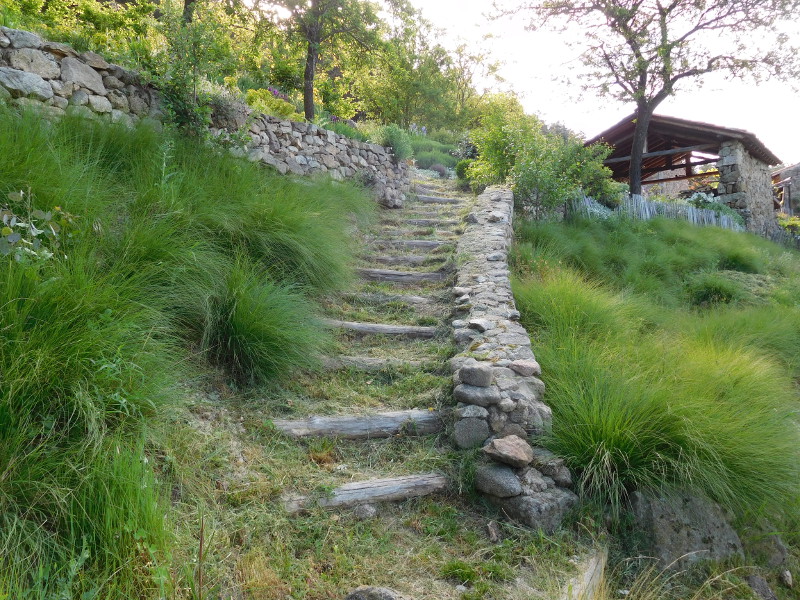 So for now I’m just going with the sea of grasses which are extraordinary. Drought tolerant to the extreme. When the rainless 2017 summer went on and on, the grasses just bleached a bit whiter, but persisted all year. 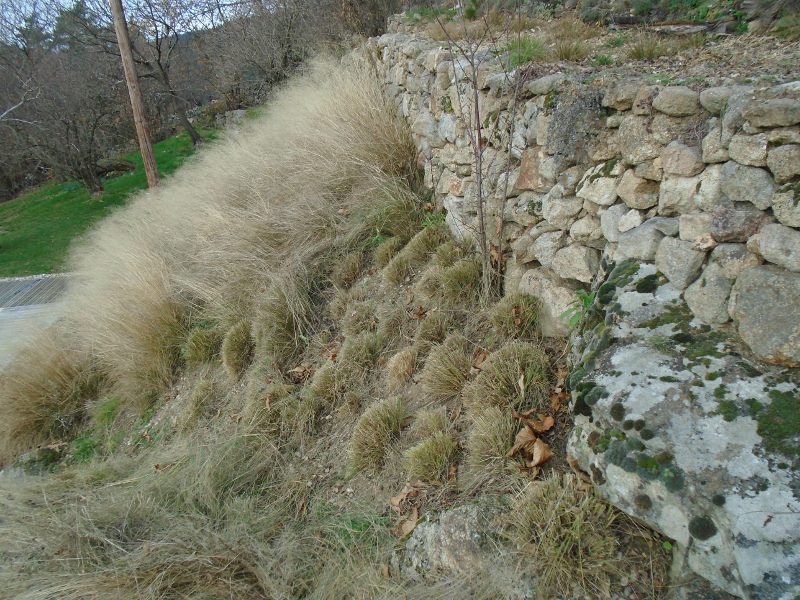 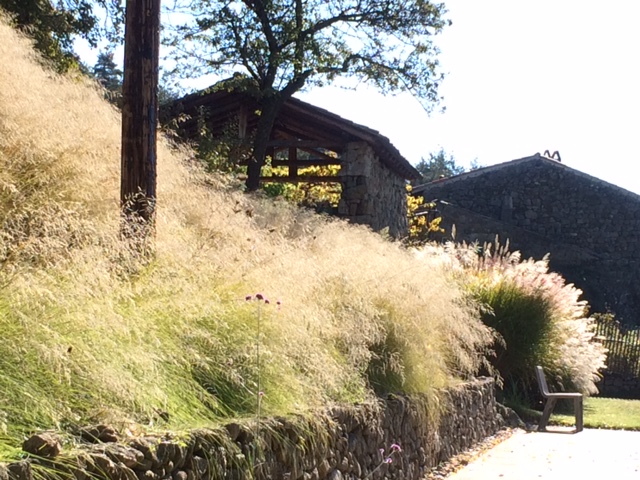 I am going to try and plant shrubs in between some time soon. But for now I just give the plants their annual February cut back and leave them to fight it out. 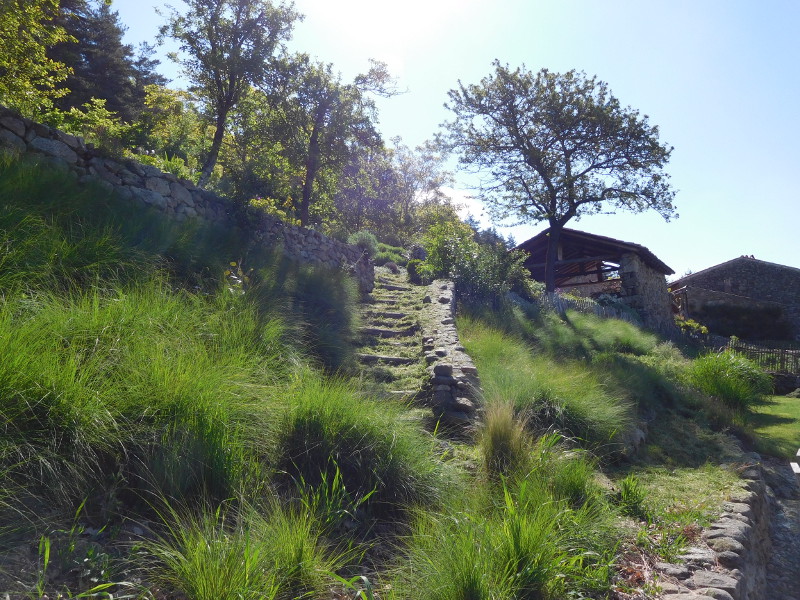 It will not be as colourful as the early years when the wildflowers were in their heyday; but sometimes a country garden can benefit for a more natural style of planting.  Well, that’s my excuse for failing to grow anything but grasses on this ridiculously inhospitable site. 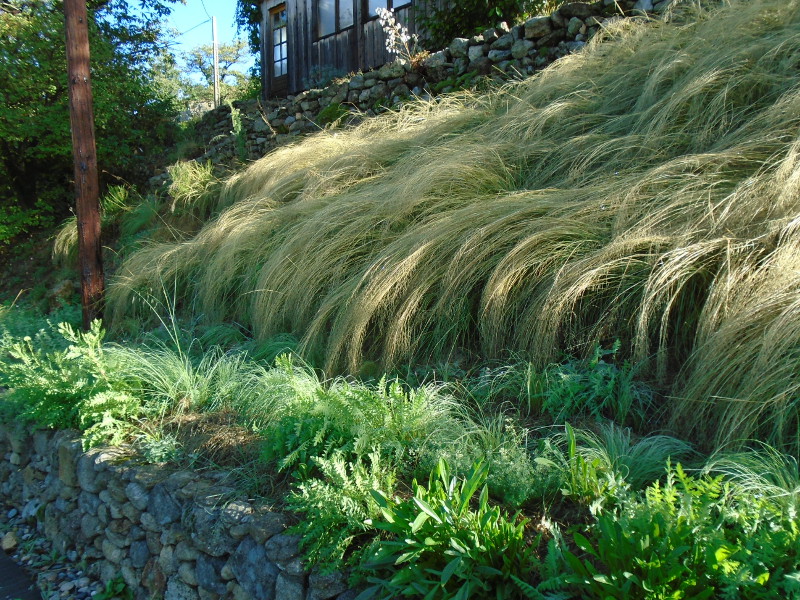