The orchard – starting an orchard from scratch 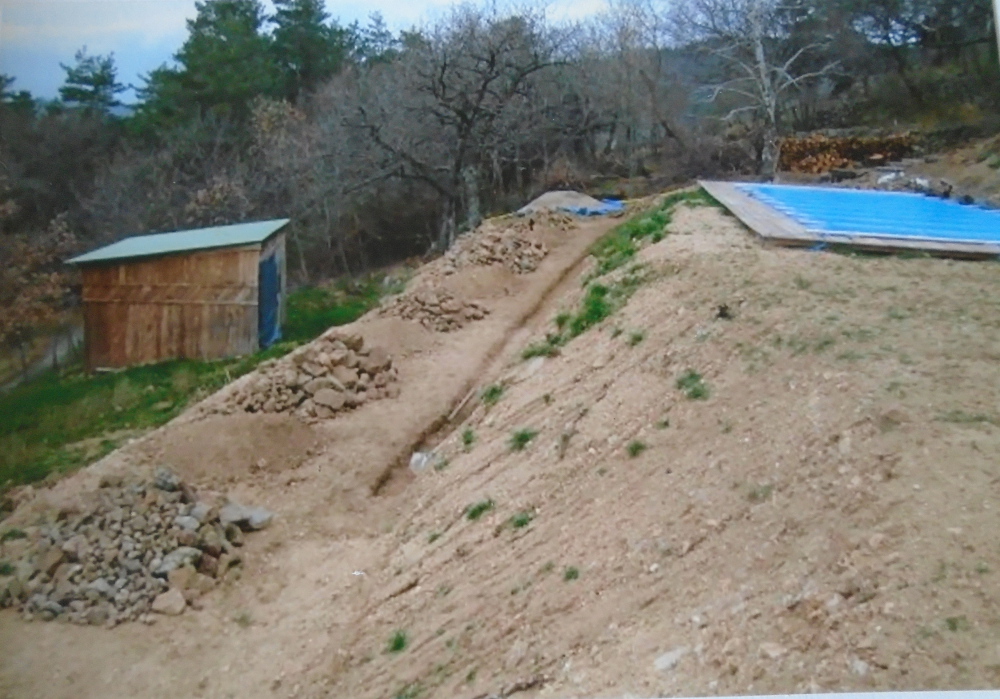 Now isn’t this fun?  You are given a blank site on your farm of maybe one hundred metres long and about ten metres wide.

It sits in the space below the long swimming pool bank and terrace and is just crying out for something green. 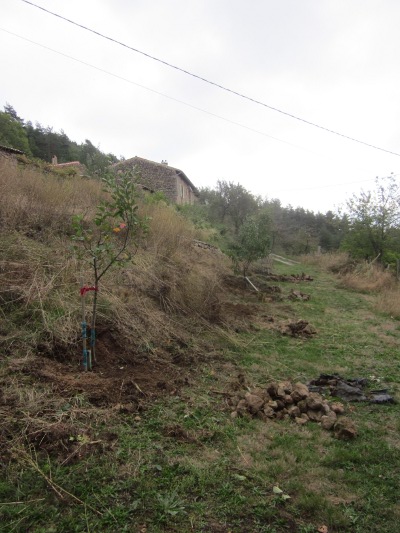 If only I knew then what I knew now about bulldozer drivers and their habits.

When the bulldozer man (not our favourite M. Dumont) created this terrace he didn’t have much of an eye for the finished product.   And I was too timid and green to say – make it neat or get out of the cab and I’ll have a go. 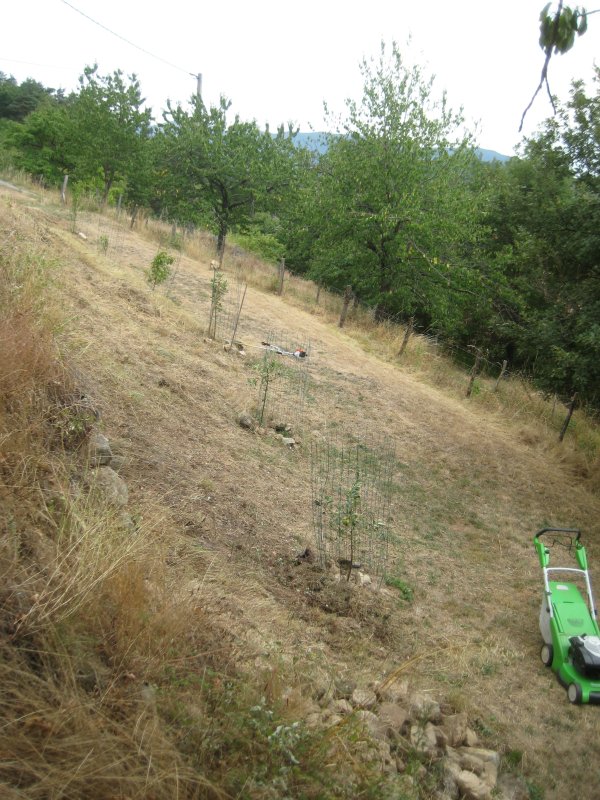 But I didn’t; and I was faced with an awkward long strip of land. Lumpy in many parts and oddly sloped.  If I can’t get to sleep at night I picture climbing in the cab of a mini digger and sorting this orchard out. Sad or what?

But I had earmarked the site for an orchard, and off I went. 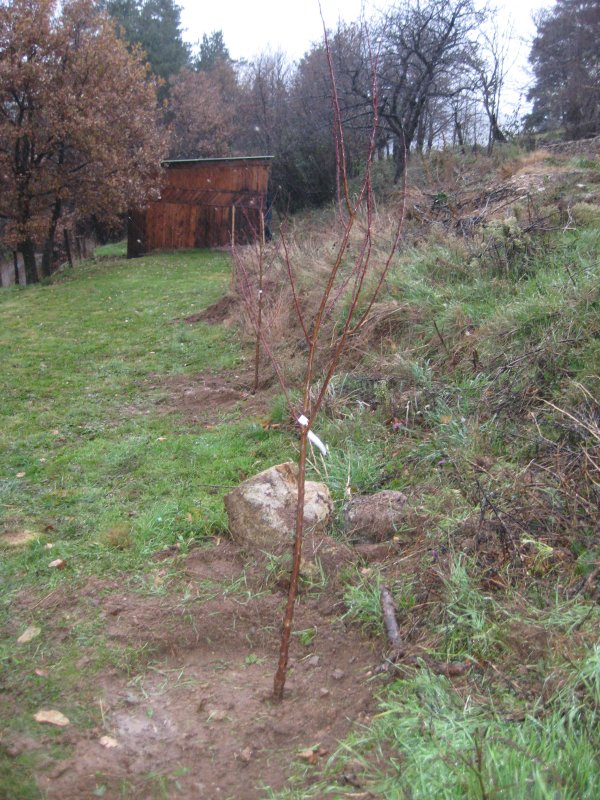 First up I had to pace it out and research the trees.  One every two metres sounded good. And most trees came from a great plant nursery which specialises in Ardèche and Cevennes fruit trees, suited to the conditions of a south-facing dry site, hot in summer, cold in winter.

Why the only thing not going against this location was wind. We aren’t cursed from the mistral wind as the mountain behind us shelters that particularly nasty French problem. 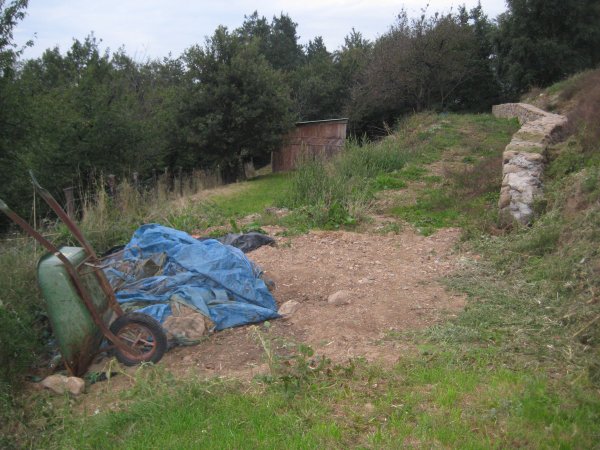 But I only discovered Frederic Cochet the tree expert a few years into this orchard experiment.

First up I stupidly invested in English varieties of apples.  And nectarines and peaches bought down at sea level from a plant nursery near the Rhone.

A rule of thumb if you live high in the mountains. Only buy trees from a plant nursery that experiences conditions as a similar altitude.  The poor dears almost died from shock in the first years. 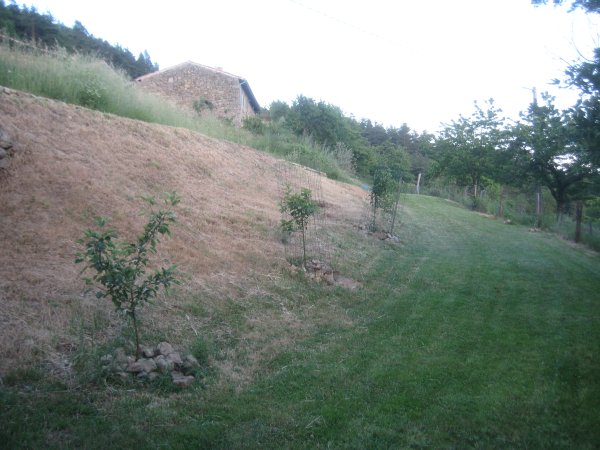 I planted the trees at the base of the steep slope. And spent years trying to keep the damn bank free of head high grasses and weeds, and removing mountains of stones that would roll down the hill and rest up at the base of the thin trunks of my trees. 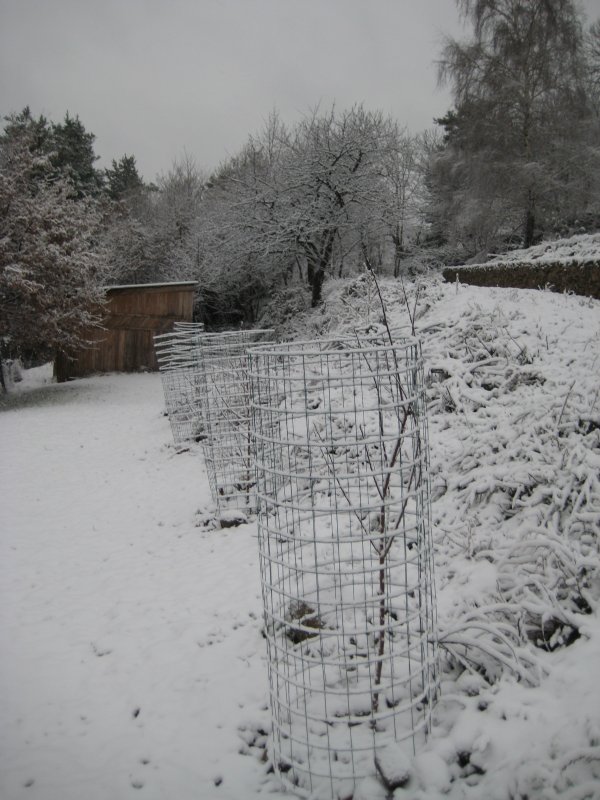 Deer at the apple at the far end. Chomped it to its juicy base. I think it was a variety called Falstaff. It has never recovered.

So I had to fence the poor huddling critters in. Not the deer. They roam wherever they like. The apple trees. 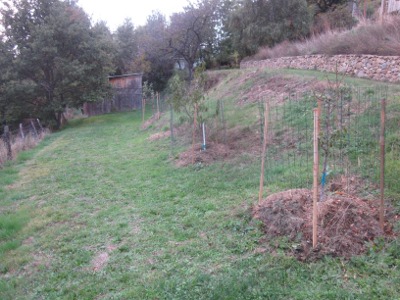 The peaches and nectarines caught peach leaf curl from the peaches that used to be on the lavender bank but were cut down TWO YEARS before I planted in a different location about one hundred metres away.

(Note to self, peach leaf curl will be around, whether you think you have cleared away the original source of infection or not.)

But after a few years the fruit trees and I settled down to a relaxed working arrangement. 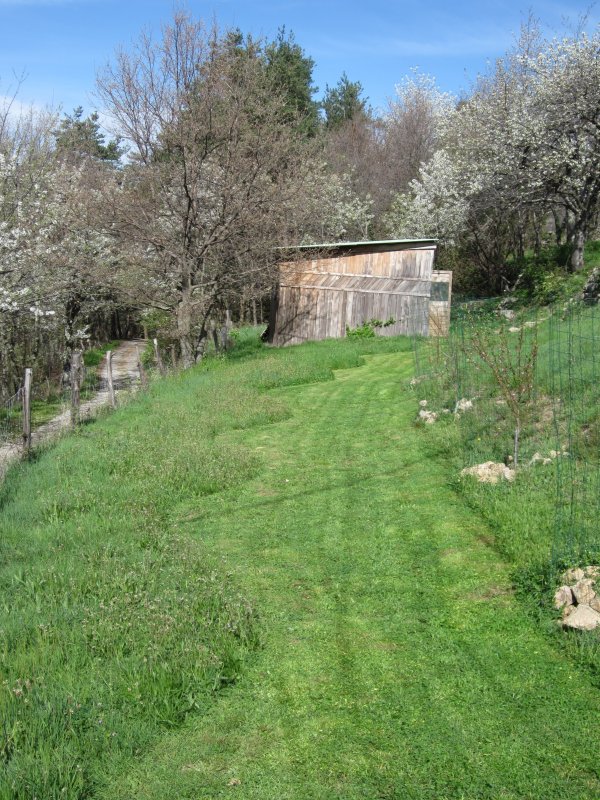 I would mow every two weeks on the flat bits. (I did a big job of repairing the sides of the terrace which was falling away into the road below).

And every few months when I couldn’t see the poor trees, I would strim. 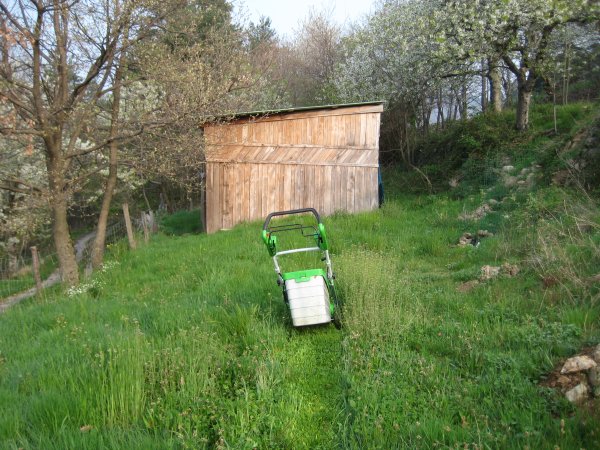 I started to have a bit of fun playing with the curves.  To mow the entire garden area in summer will easily take seven hours. 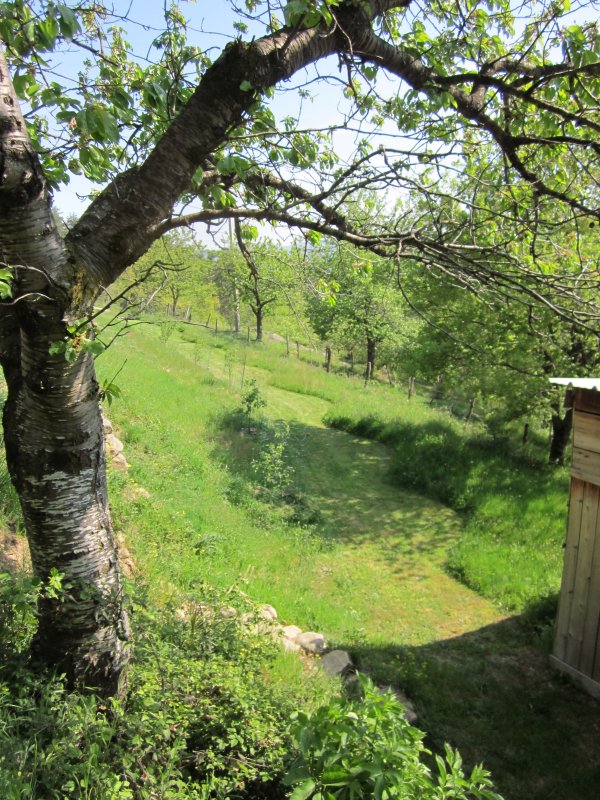 So I cut down the work by leaving the left hand side of this orchard a little higher and zooming about making shapes.

But this is meant to be a productive orchard; and I have now doubled the quantity of my trees. Planting halfway up the slope as well.

It serves no purpose except to really annoy me as the weeds grow so lustily.

So in went the proper varieties of French apples and almonds and the wonderful cherry – noir de meched. 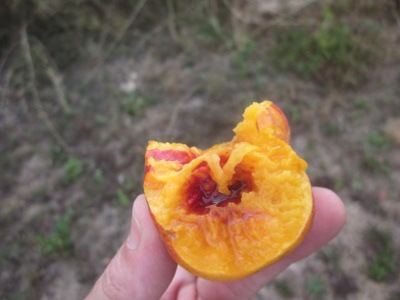 I have high hopes for these trees. Well higher hopes than the huddling masses on the edge of the slope below. 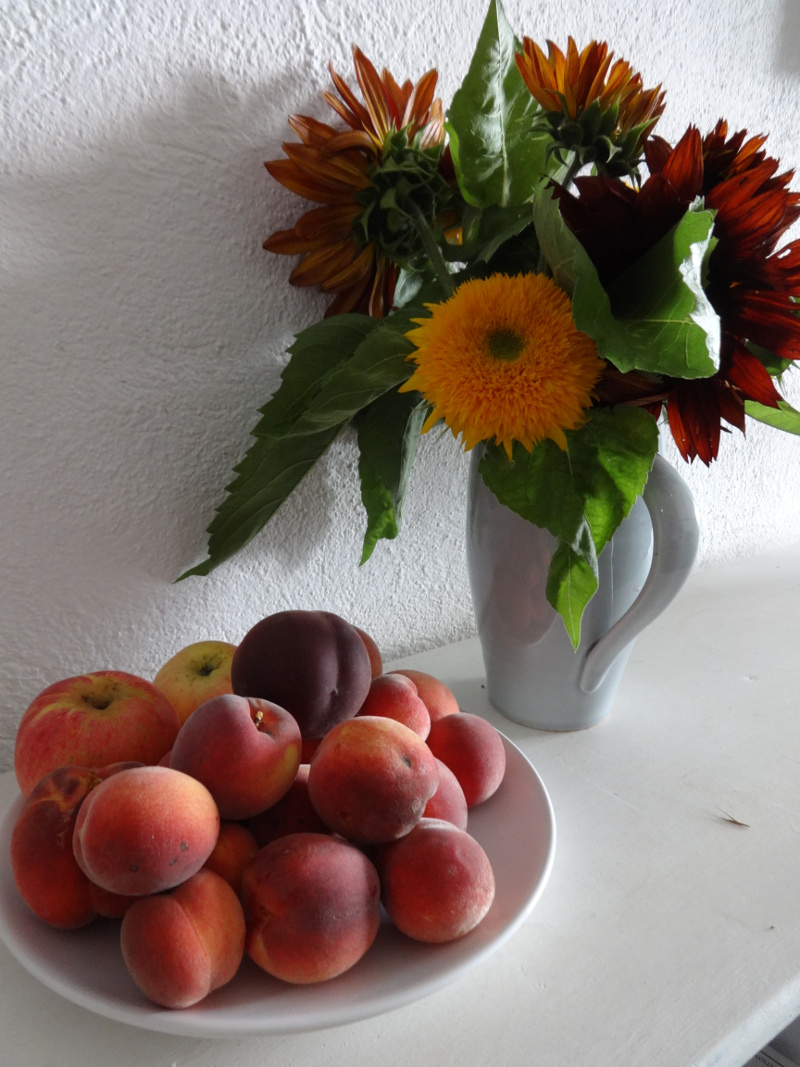 But that’s unkind. I guess trees take so much longer than in a wet climate. 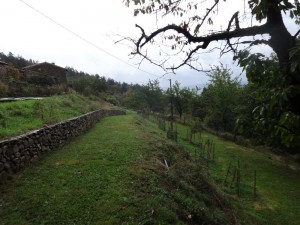 I have had some lovely peaches this season.

Five years after laboriously picking off the affected leaves from the infection, pocketing each and every falling leaf and putting them in the bin.

And I have high hopes for the future.

All the trees are well protected from deer; the entire orchard survived its latest wild boar attack. (That was sporting. See my blog post of 15th November 2014 for all the gory damage they caused.)

And the trees are producing fruit at last.