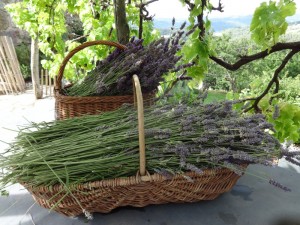 I present to you something that isn’t the colour of dirt. Yes, just for once you don’t get endless pictures of rocks and soil.

That will come later.

Here is my morning’s cutting of lavender. I used to be very picky and caefully cut each lavender flower just above a leaf node. Hoping that I will get a  second flowering later in the year.

But now I just grab a handful of tall lavender plants and chop.  There is no finesse. But I have so many shrubs of the stuff that it barely makes an inroad into the overall design. 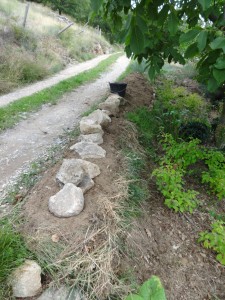 Enough scent and colour; back to the soil.  I worked out where I wanted to dump the excess soil that came out of the steep bank.

The very top of the little bed underneath the walnut tree was a bit of a dog’s breakfast.  I built up the top of the bed with upturned festuca grasses and anything  I could find.

You may recall that this was to be a mini flood barrier as the standing water from the unmade road above raced over the garden below.

I buried two drains and just left the top of the bed as a rough and ready mess. 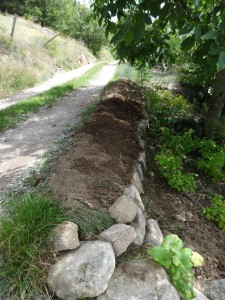 It’s an unintentional one: festuca grasses. They are our mountain weed. Not a bad clumping grass to have as you can merrily harvest them for ballast and infilling.  But they self seed way too successfully.

But as I was merrily dumping almost a dozen buckets of soil on the very top, I realised that I would have to build a little retaining wall at the base.  The slope is too steep to hold the soil.

And I’ll do anything to avoid strimming in future. So it was over to the far end of the property where we have a rock supply and I chose some solid granite mini monsters.

I can’t lift the big ones. 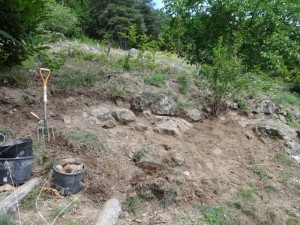 And once that was done I could get back to removing more soil from the rocks.  You can almost see the bones being revealed. (Sorry, stones.)

I can see a pattern that I might be able to work with.  But this really is an early morning job before it gets too warm.  And I spent a bit of time up on the slope above the courtyard weeding the oak trees.

That’s a thankless old task.  The terrace is on rock and there is very little soil for anything but festuca and weeds.  But I have planted about a dozen oaks and few of them are thriving. 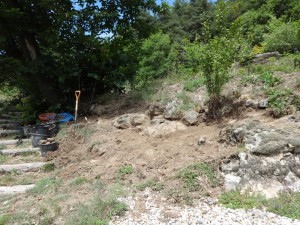 I need to give the entire area a good strim and then do some landscaping to sort out the surface.  But that’s an August job.

I haven’t finished this landscaping project yet. It really is unslightly in this half finished state.

« The landscape lottery » Eating plums straight from the tree