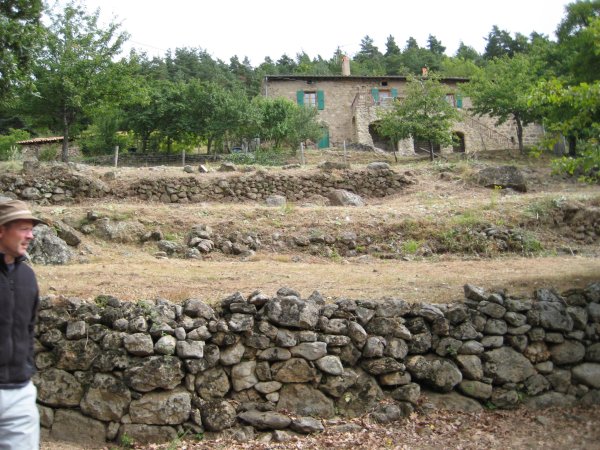 When you stand on the terrace of our main farmhouse your eyes are immediately drawn to the stunning sweep of mountains on the horizon.

If you are gardener, you would look down onto the terraces at your feet. That’s the curse of being the custodian of a very large plot of land. There is no end to inspecting and frowning and leaping into action. 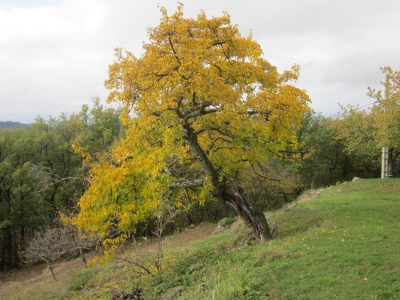 Our farm hugs the mountain, and every ten metres or so you will come across a dry stone granite wall. They are the work of centuries and help to make these dry and poor parcels of land useful for crops.

On our mountain farm the traditional crop was first mulberries and then chestnuts and now cherries.  But there was always room for livestock beneath the trees. 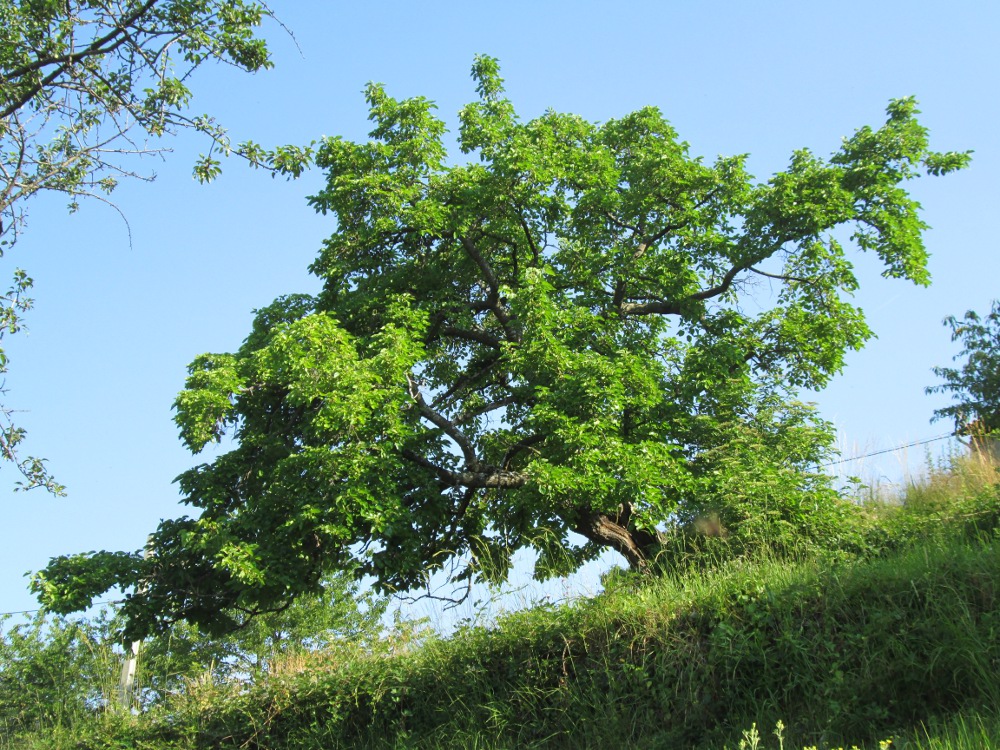 Our previous owners had sheep on these acres of land to keep the grass down. In our era it has fallen to me.

And the sad thing is every time I write about these lower terraces I am usually moaning or complaining of aching muscles from mowing or strimming or hacking back weeds. 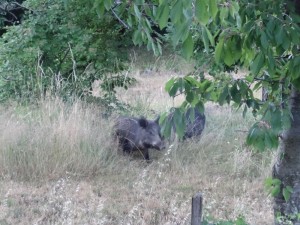 But that’s a shame as it really is a magical part of the farm.

First those stunning walls. But also some rather magnificent trees. The most arresting one is the last mulberry on the second terrace below the road.

(I think there are ten terraces in all, but as I am usually in a dazed state from weed clearing, I always forget to count properly or take notes.)

I love it in all seasons. It is a white mulberry tree as this was the one used for the production of silkworms. It was introduced into France from China in the thirteenth century and locals were still spinning silk up until the 1960s in our village; but at vastly reduced quantities. 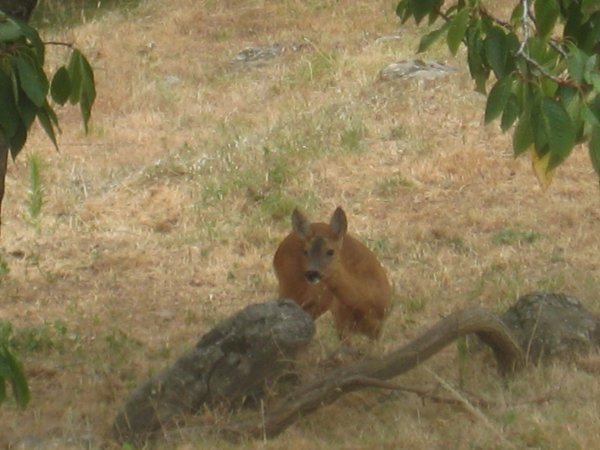 The fruit is quite abundant each summer – but the white little fruit looks dry and desiccated; but it is over sweet and a great favourite with the wildlife. 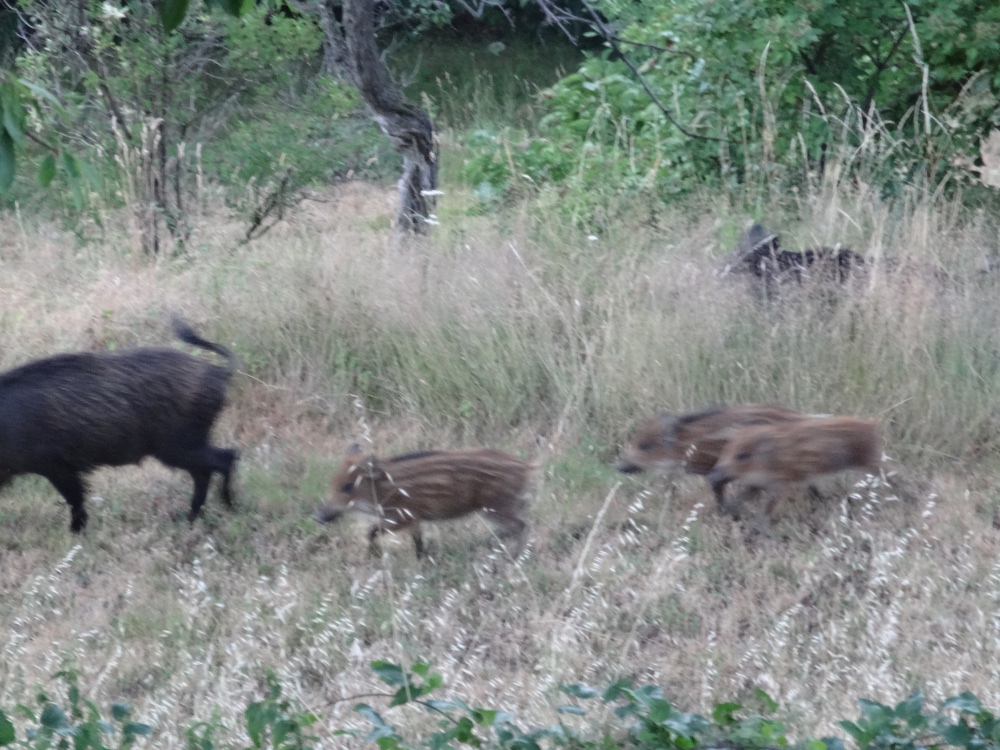 We can be guaranteed to see foxes, wild boar and deer, all coming up at certain times of dusk and dawn to work their way around the base of the tree, snapping up all the tasty fruit.

And in the night the badger and many more creatures we don’t see. We have seen some red squirrels about too. But they are rare.

And why on earth would they want to be bothering with mulberries when they have so many thousand chestnuts to enjoy? 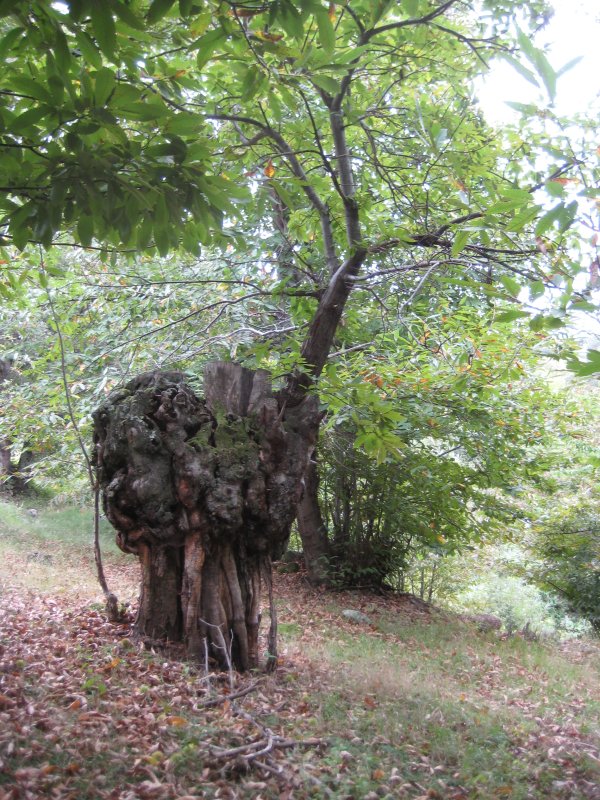 Once the mulberry crop died out – competition from other parts of the world with silk to trade and also through a phytophera parasite; the chestnut crop came to the fore.

And our farm, like so many around here were heavily wooded with that valuable tree.

You can see some of the original grafted trees right down on one of our lowest terrace (before the vineyard).  They are odd beasts indeed. You might not be able to appreciate the scale of this trunk; it would take four people I think with linked arms to surround it.

But sadly most of our crop is now the self seeded varieties which don’t yield bumper fruit. This chestnut farm was abandoned in the early 1900s. 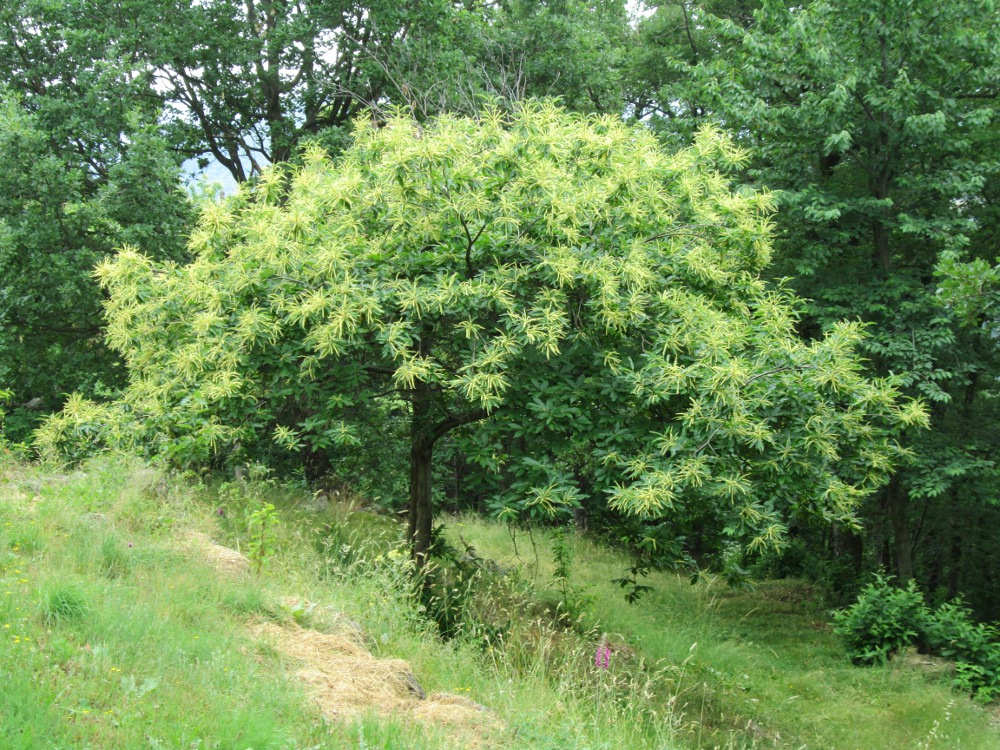 We do have one or two huge trees that crop heavily every year on this lower terrace and are good enough to go to the cooperative.

But as I am only a trainee peasant and not a registered farmer, we just give most of the crop away to members of the cooperative who come over to pick them up.

Our main crop is up in the forest beyond the top terrace. 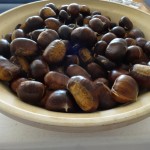 But we have more than enough to eat and to give away to friends.

The third tree crop on this farm are the cherries; planted in the 1970s and destined for the production of alcohol; a rather potent cherry liqueur which would blow the top of your head off if you inhaled as you sipped. 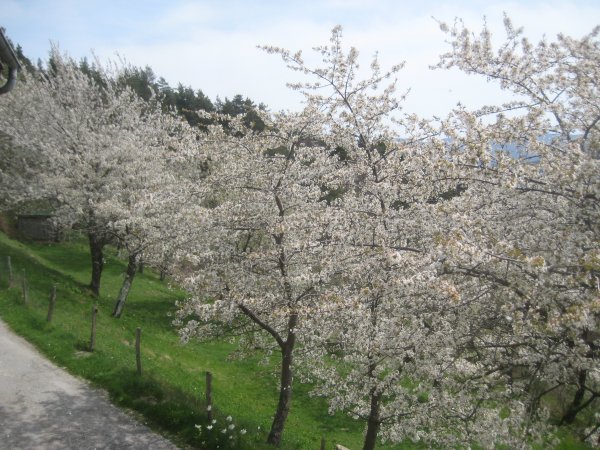 Our previous owners were responsible for the planting of 44 cherries all the way up the drive and on the edge of the first terrace. 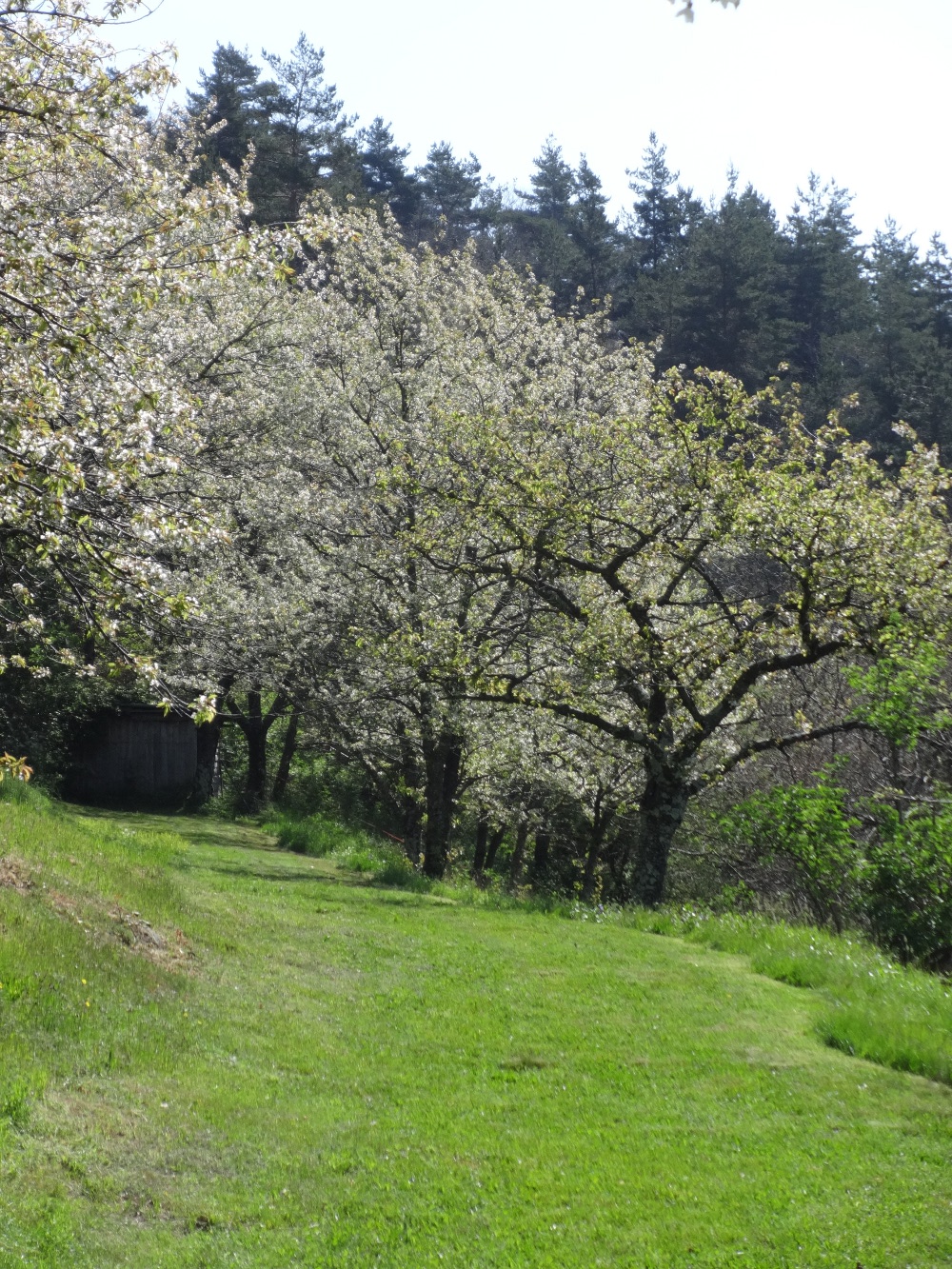 It’s a shame they didn’t really go for the black juicy fruit varieties which others grow commercially here; cherries destined for booze are not the most sumptuous type. 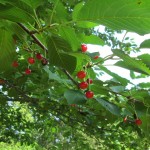 But they are utterly enchanting in spring when all the trees are in blossom.

And I have been playing catch up by planting four Noir de Meched cherry varieties in the orchard so we have good eating fruit in future. 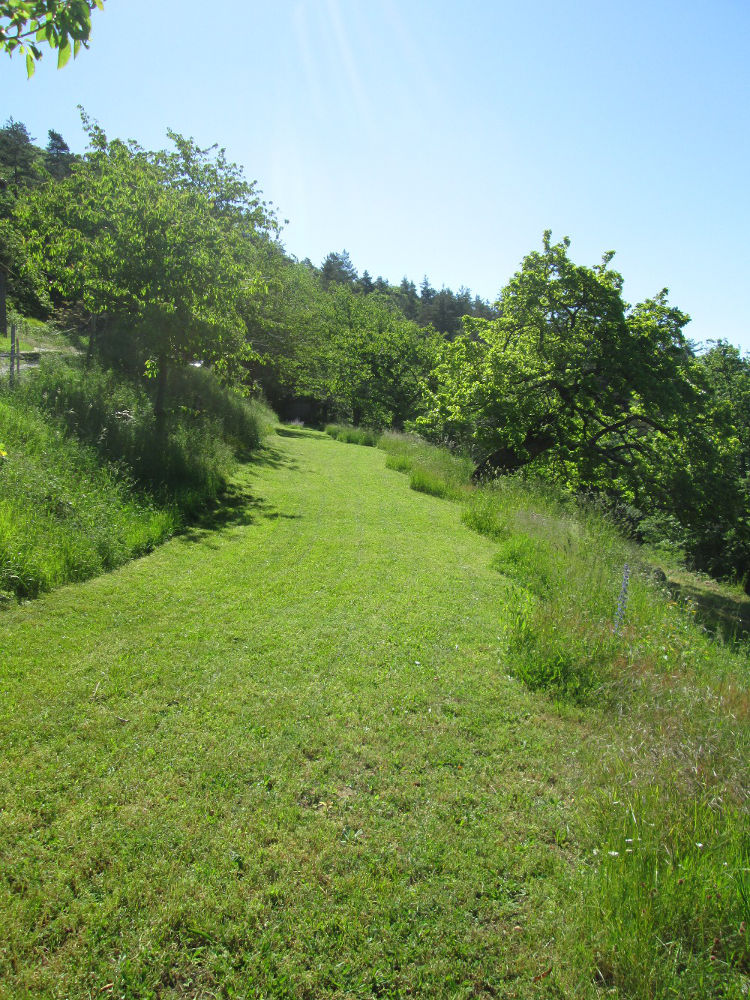 The wild cherry variety here on the terrace are perfect for syrups and that keeps me busy.

But what keeps me more busy is the maintenance of these terraces.  My endless forays with noisy tools down past the house and onto the green grass.

The land under cultivation here is in narrow strips of land. The first five terrac 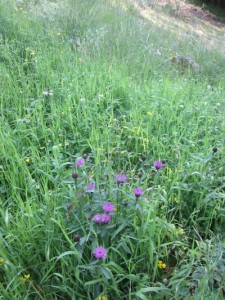 es roughly line up and are the ones I spend the most time working.

Over the years I have experimented with meadow style mowing, neglect, short back and sides, and have now settled for wonky curves and pretty close cut grass on the first terrace; and a close-ish trim for the rest.

But that’s not entirely accurate. I have to balance keeping down the weeds – invasive Verbascum, broom and brambles being my worst enemy; and trying to encourage wild flowers which will attract bees and improve the interest in this massive space.

Some years I have fabulous thymes on the lower terraces.  And I studiously mow around every clump to make sure they set flower. 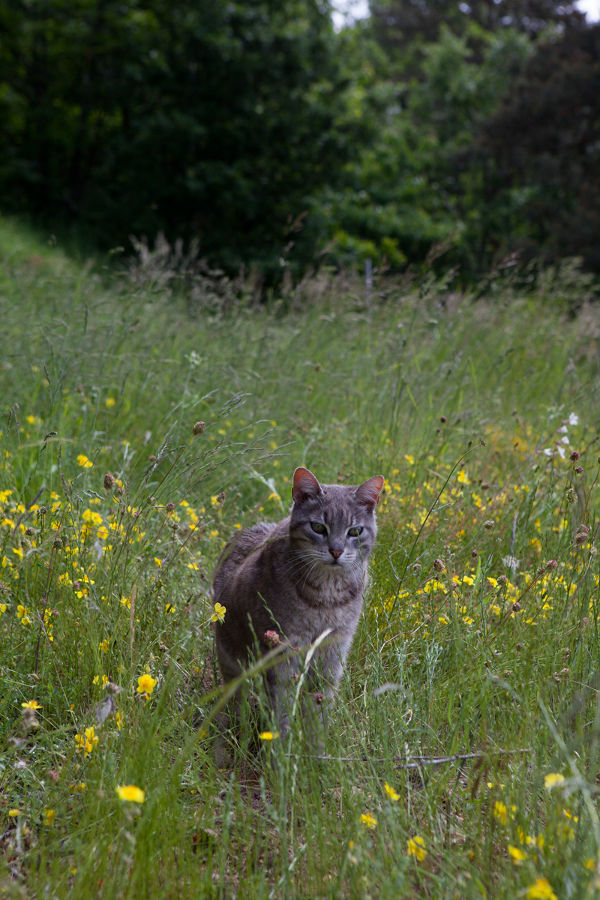 And I have a great clump of wild salvias which come up year after year. And Artur is often found hunting in the long grass.

But one thing you cannot do is neglect the chore of cutting.

When you stand at the house and look down you see these first terraces – hopefully tamed and tidy – but to the far left is a large sloping meadow which was never terraced. And that means you have to work pretty hard to keep it in control. 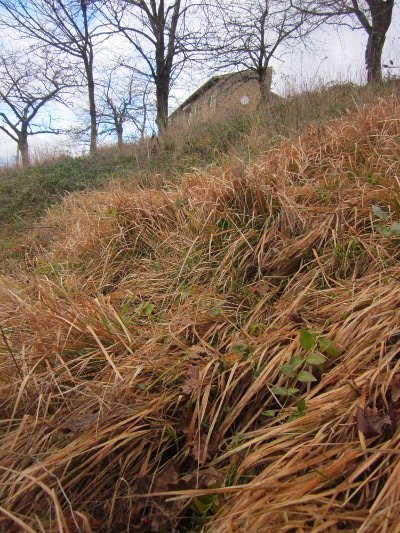 I have self-sown cherries and chestnut seedlings which I have to assiduously remove. Some lovely oaks which I am protecting with wire to try and get them to grow up like the clump in the far corner.

And there is no getting around the bramble thickets which will take over the entire area in a season if I’m not careful.

I loathe the blighters. But secretly admire them too. What brilliant colonisers. 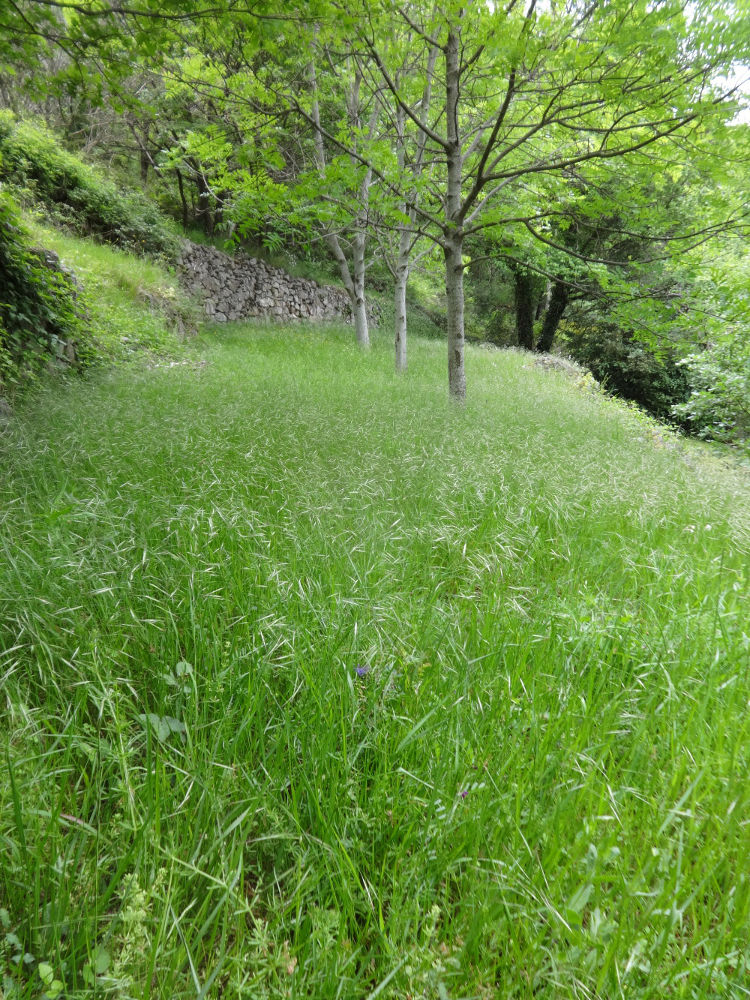 Once you have negotiated the prairie with a playful bracken invasion at the bottom there are four more terraces to clamber down before you reach the vineyard.

I have written about that terrace elsewhere, but here is one of my favourite terrace photos. It might not seem impressive to you. 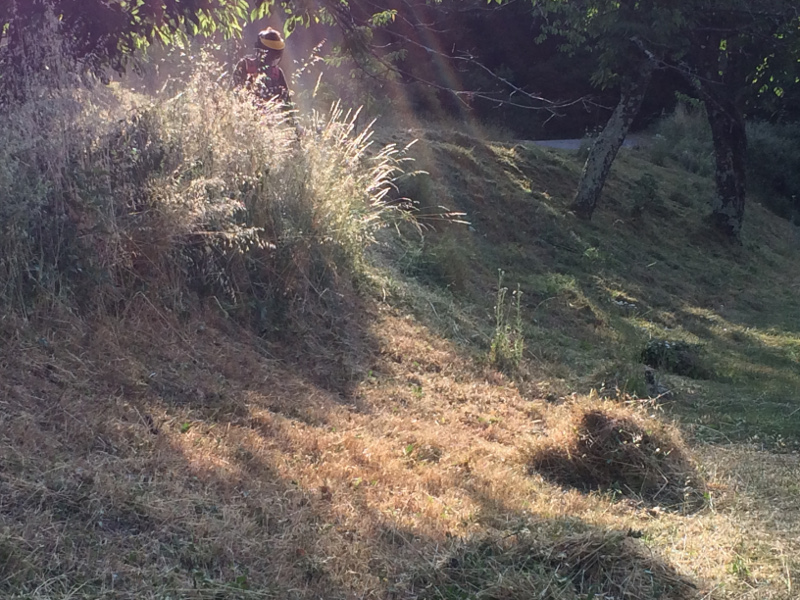 But after seven years I can happily say that one (just one) of the areas is what I imagined a wildflower meadow would look like. It is lush and interesting, buzzing with bees and full of flowers. It is also bramble free.

I can mow this one in March or April, and then leave it go grow and thrive until I bring out the strimmer and cut it all down in September.

It is too steep to get the mower this far down the mountain; the path to this terrace is more suited to a goat than a machine with wheels.

But I can work the mower to many of the other terraces. 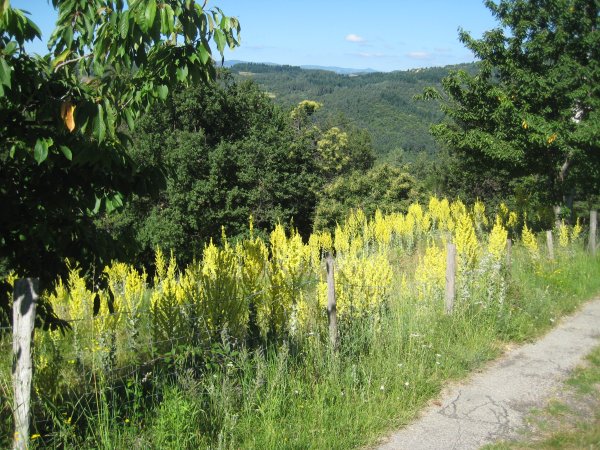 And just to finish; here is a photo of neglect: the Verbascum weeds allowed to go wild when we first came here.

To call them pernicious would be polite.  And if you can’t get at them before they throw up their flower spike you have had it. 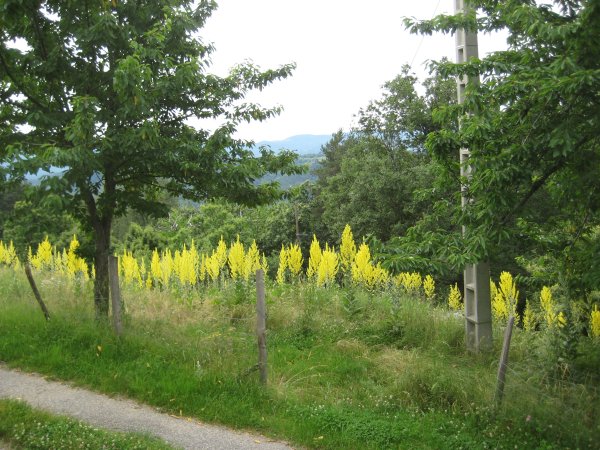 And to make matters more playful, I’m allergic to their pollen.

So if you wonder why I go on and on about having to cut back the weeds on these enormous lower terraces you will understand.

And also to wonder why I cut the grass so closely in the summer months when I could leave the wildflowers to set seed.   I am trying to hold back some of the worse bits of mother nature. 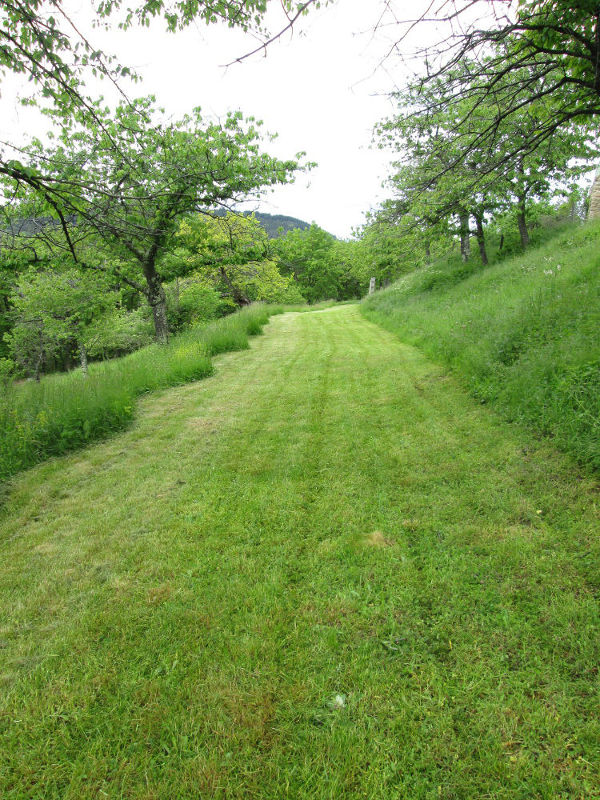 Now if verbascums were a tasty crop or dead useful, I might hold off.  But they are nothing but a nuisance. So you have been warned. Do not grow them in your garden.

I’ve tried to plant them all along the path beside the road, to match the flowering white cherry blossom in spring. 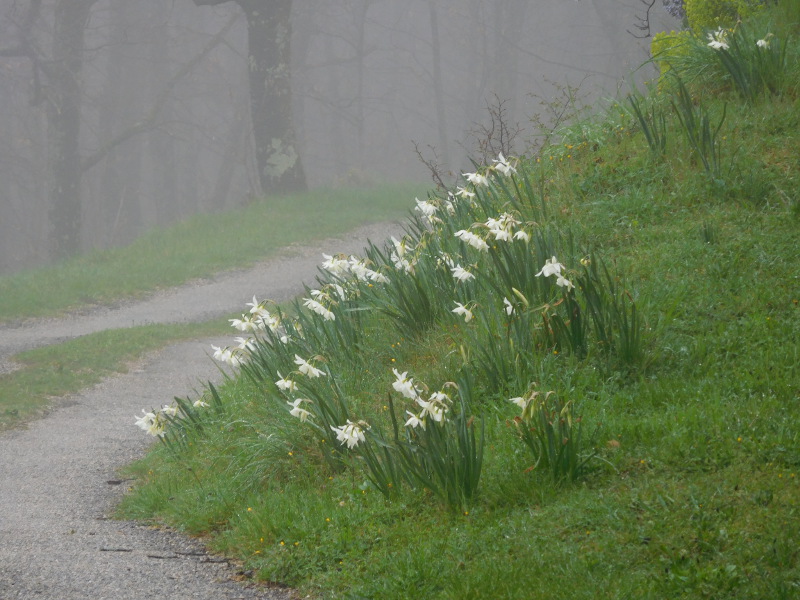 And I’ve added Camassias to the edge where the damp water from the spring flows. When it rains. 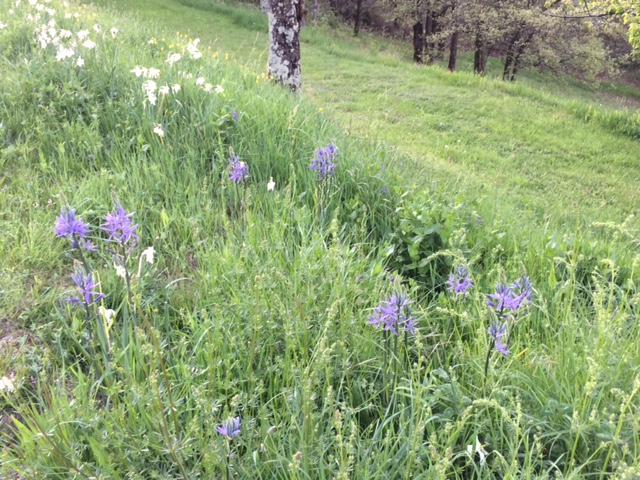 Which was very rare indeed.

And the biggest change to the terraces involves the great decision to remove the wire fencing from the edge of the road. 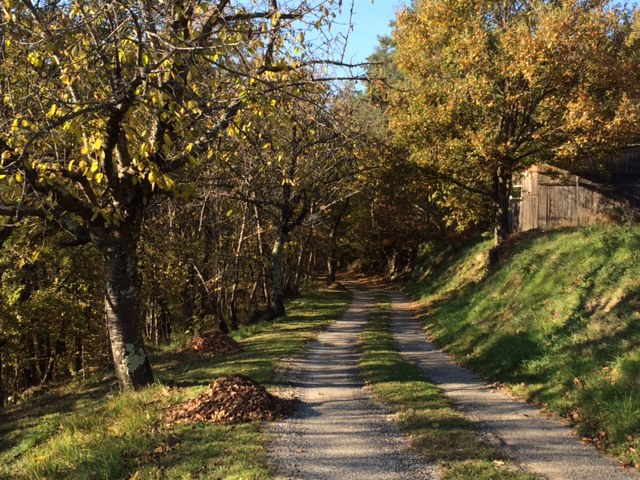 I was anxious about this as it was an animal deterrent. But the trouble in trying to strim the weeds from the wire each year was tedious beyond belief. 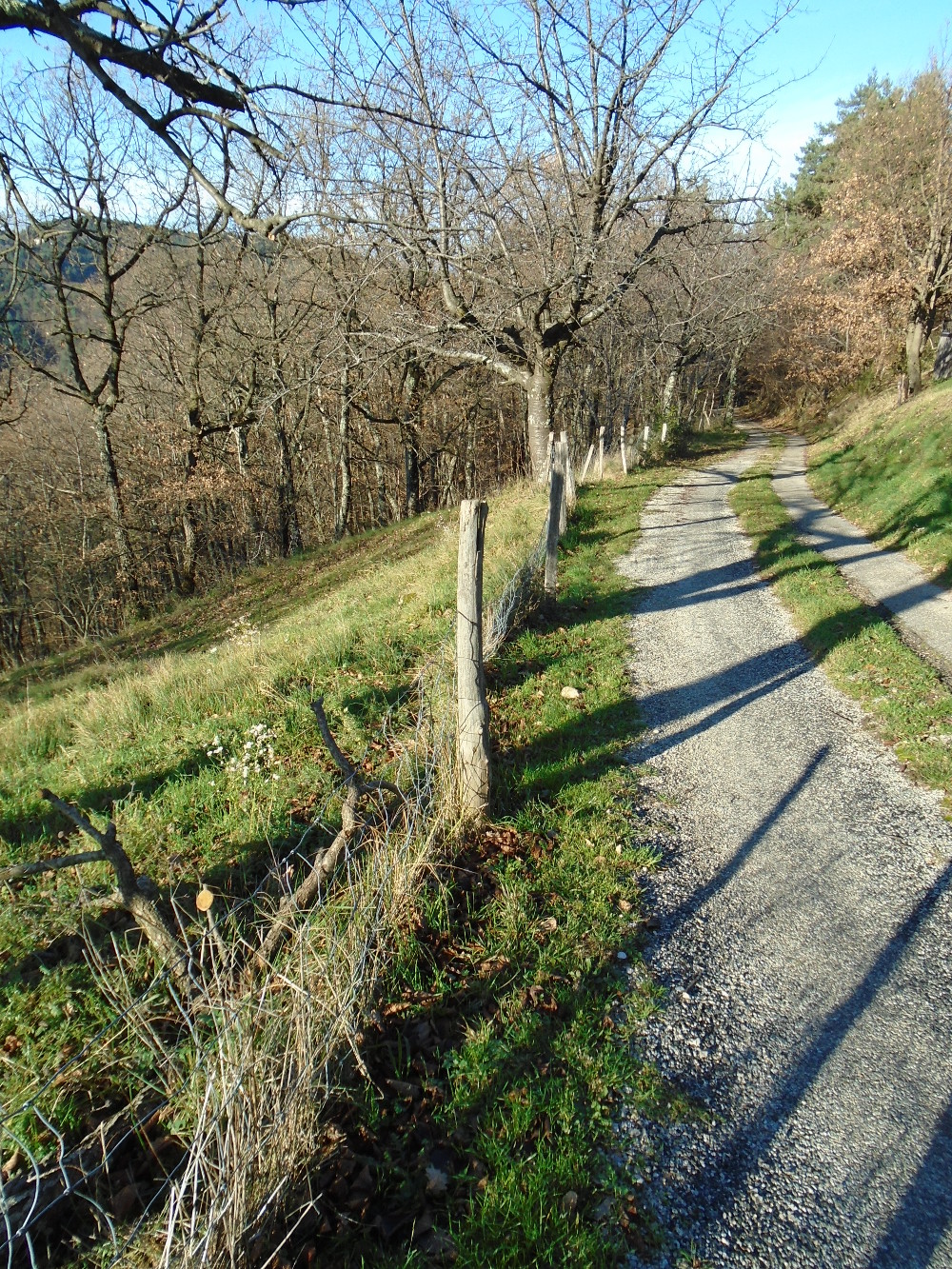 There were brambles, nettles and challenging Vinca all vying for attention up the wire.

So out the fence came. And I spent weeks and weeks ferrying rolls of the redundant wire to the tip. 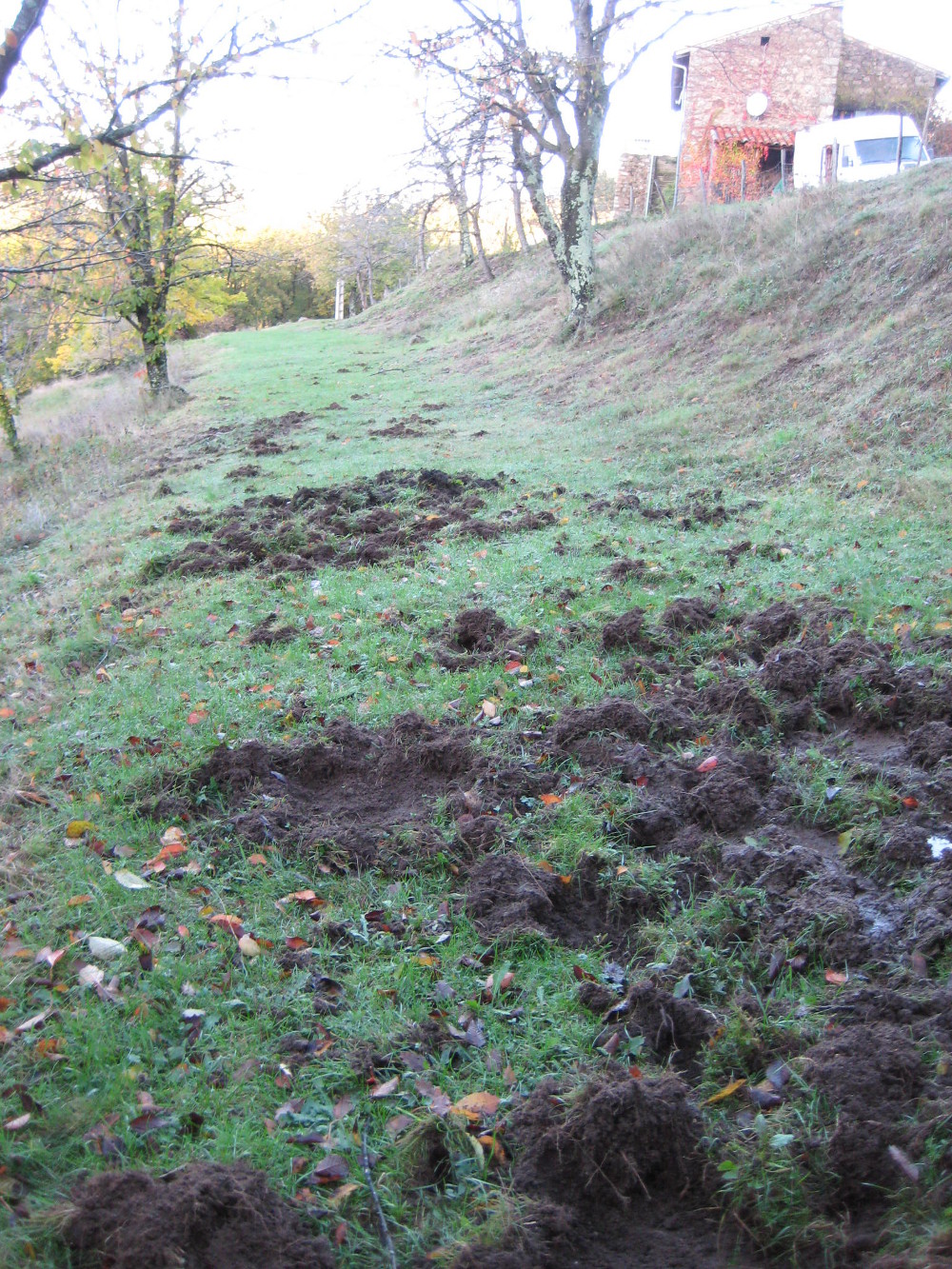 How long did it take before the boar moved in?

A month? It’s an annual adventure. It always looks like a rather vigorous game of rugger has taken place some mornings.

But I don’t regret the removal of the fence. For now. Even in the autumn of 2017 when the poor boar were so hungry they came weekly to churn and churn.

Still. the lower terraces are a pleasure to gaze on. And of course, my favourite tree has to be photographed in all seasons.