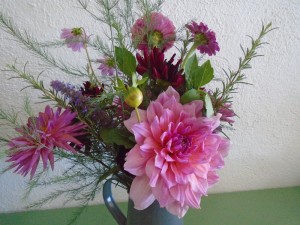 It’s official. I am a dahlia convert. Which makes me look as though I have joined a wacky religion. And in one sense I have. I always knew gardeners who were obsessed with dahlias. And they had that same starry eyed look you normally associate with a freshly converted zealot.

What is annoying is that dahlia fans have been right all along.  You buy tubers. You stick them in the ground. Or in a pot in my case. Water them. Drop a few chicken pellets of manure their way. And then pick and pick and pick flowers all season.

There is no sowing seed, pricking out, potting on, or planting out.  And if all the conditions are right, you do get an enormous number of flowers over the season.

My favourites are Sugar Diamond and Otto’s Thrill. Actually Otto’s Thrill almost went onto the compost heap as it was so slow to come into growth. All the rest of the tubers I bought came into growth and started to look like plants weeks before Otto’s Thrill did anything at all. Maybe that is why it was a thrill. 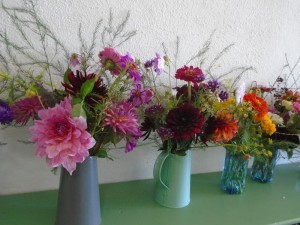 I had actually placed the pot with the recalcitrant tuber outside the potting shed and assumed it was lost. I went away. And ten days later came back to find a few leaves poking out.

But in keeping with its late showing into growth, it has been the last of the dahlias to start flowering.

I never would have thought a pink flower would please me so much. I much prefer the darker crimson ones. But it is the shape as you can see here in the vases. It puts on such a display. 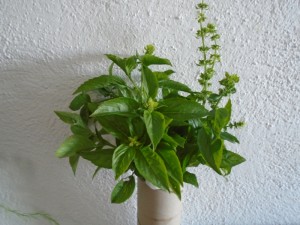 Mind you everything is rather marvellous right now. I have zinnias going mad in the bed beside the cutting garden. It has grown so large with all the watering that the basil I had planted underneath is working hard to survive.

At least the basil isn’t going over to flower as the other ones in direct sunlight. It is so utterly shaded by blooms.  And it makes quite a fetching bouquet as well.

One plant I won’t be doing again next year are these asters. I was looking for some variety in the sea of cosmos and dahlias and thought these annual Asters would suit. 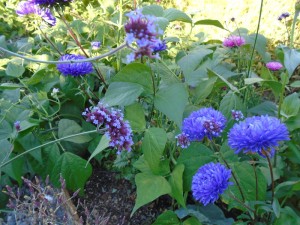 And in France that’s a disaster.  As those of you who live here know, every 1st November is All Saints Day. The day most people put flowers on the graves of their departed.  And the flower of choice – long lived chrysanths. (Please don’t ask me to spell the whole name again, I had to look it up.) 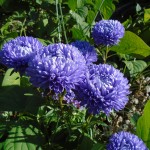 The blue ones almost work, but the rest of the colours would not do in a bouquet outside November.

So here’s hoping they won’t self seed. Actually they look so overbred I don’t think they stand a chance of a seed setting on these pompoms.

I’ll enjoy them for this season and go back to the drawing board for more fun varieties of annual blooms. What? You don’t have enough already? 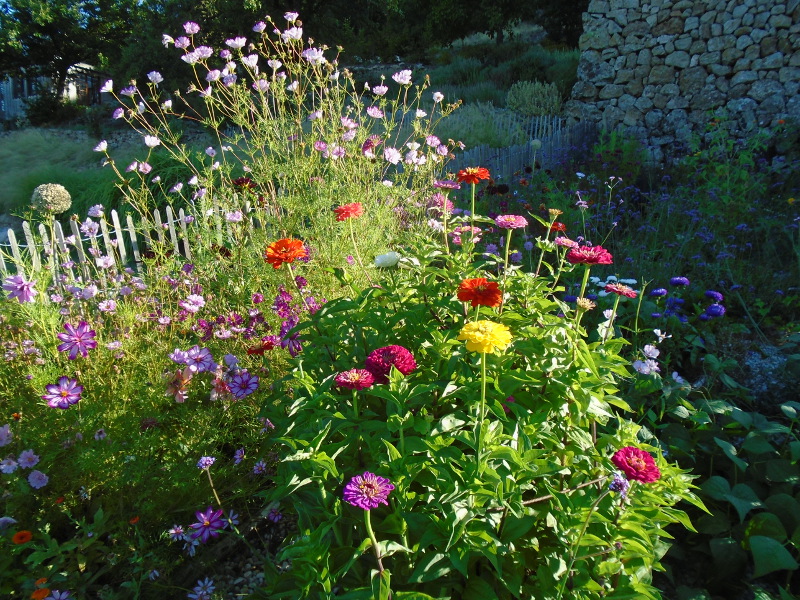