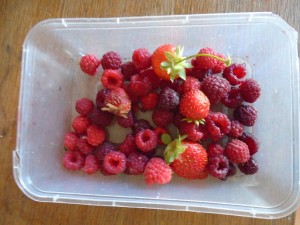 Hurry, hurry. This is the end of the glorious weather. This weekend the temperature is set to drop from absurd 18C to 4C in the daytime. With a few minus 1C  and minus 3C temperatures in the night.

So winter comes at last.

Ot is it maybe just a blip? We had a gentle frost and a week of cold weather once already. But since then it has all been blazing sunhine and growth.

I had thought we would see the last of my dahlias back in October. But no, these plucky flowers are still going. Not enough for an exuberant display. But plenty for a a few to sit in a vase with my favourite scented branches of eleagnus. 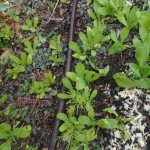 The living room smells divine. As do the hedges where these rather unremarkable shrubs lurk.  Their blossom only appears in autumn and if I’m lucky, will persist into winter. 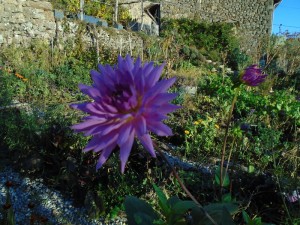 I have already mulched the base of the dahlias (sunk into the ground in pots) with my wood chips. All I need now is the ‘first frost’. That way the plants can finally stop throwing up these extraordinary blooms and just have a rest.

I will cut the stalks back to the ground and tuck the pots up for the winter. Yep. I’m leaving them be.  If they come up in spring I will be thrilled.  And I love the idea of just keeping them safe in the ground from marauding mole rats (they don’t like my plastic pots) and mulching heavily to hopefully protect them from a cold winter.

Last winter was absurdly mild (for us). Can it happen again?  I was pondering that as I inspected the rest of the long garden bed which I devote to cut flowers.  I have weeds certainly. But I also have an awful lot of little cosmos and calendula seedlings. 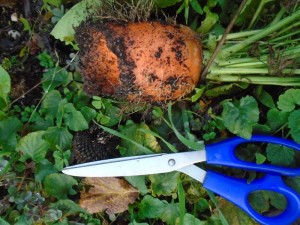 The poor little things germinated in this mild autumn. Normally they lie dormant until spring.

Will they make it through the winter? I have no idea. That’s the fun of gardening. We are ignorant souls.

And so are all my vegetables as the end of the season. I wanted to show you my sorrel, the swiss chard, the squashes. They are all still going strong. But boy are they ratty.

And speaking of ratty… that effing mole rat has struck again.

The carrots may all look gorgeous. I have two beds of parsnips and carrots. Out of curiousity I lifted one to check how it is doing. I had my doubts as it was a bed where the mole rat has been a few seasons back.

Yep.  He is enjoying the plentiful supply of juicy veg too.

So instead of raging and stomping about and ranting. I had best leave you with the last shot of cat sunning himself in the autumn sunshine. More photogenic than ratty veg and ratty munched veg.