The herb garden – aiming for practical and pleasing 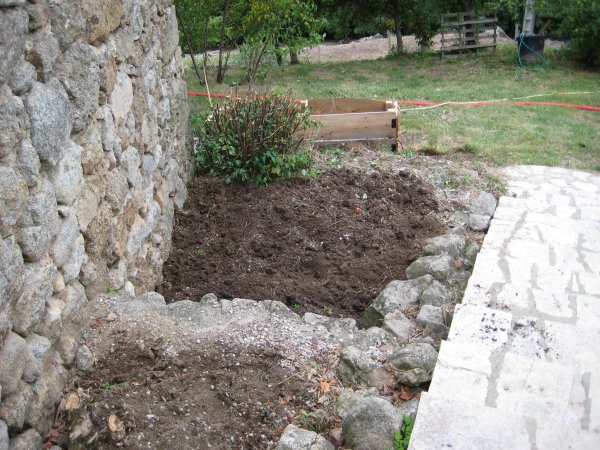 I only ever seem to photograph this garden in spring.  And that’s a hint. It’s all downhill in summer. Except of course I use this part of the garden for culinary purposes and not just ogling plants.  So the main show may be over but the herbs live on. 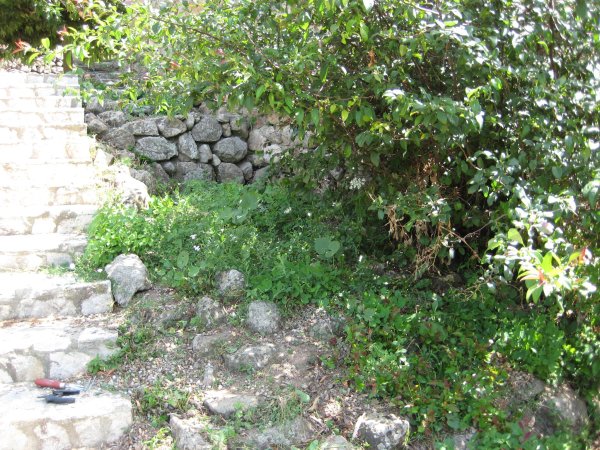 This part of the garden sits right next to the bread oven, to the right of the main house. And forms the left-hand side of my rather unattractive crazy paving steps that lead down to the main vegetable garden and on to the lawn.

It is divided into three small beds; the top one only has room for a giant rosemary bush that I rescued from the potager, a rose New Dawn, and a really annoying elderflower which I cut out seven years ago but refuses to die.

It’s right beside the very prickly rose, so it’s a playful exercise in weed control.

When we first came, the main bed was dominated by an ornamental quince (chaenomeles).  Don’t ask me which one as I never let it stick around long enough to see it flower the next spring. It was hideous. And suckered everywhere.  It still does.

One day I will have a rant about the annoying suckering habits of quinces and plums and my keyboard will die from me hitting the keys so hard in rage. 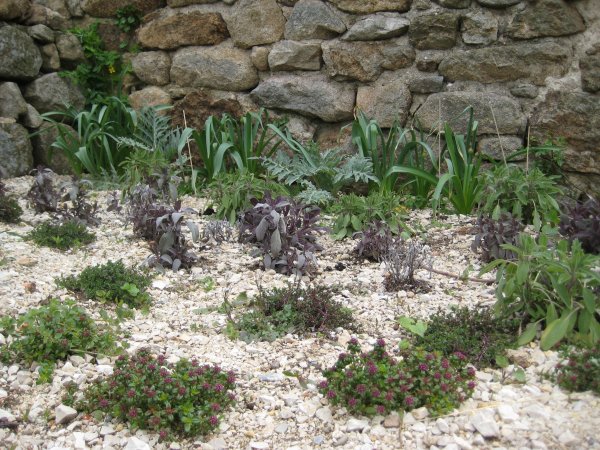 But this is a farm tour, so I will be polite.

Out came the quince.  I cleared the bed.  And then thought that herbs would be a good idea. Not that far to walk from the kitchen (well, it is a long way, but not as far as going all the way to the potting shed to cut-and-come-again salad leaves I try and grow all year round.)

And I was starting to really enjoy the culinary and visual delights of the sage family. 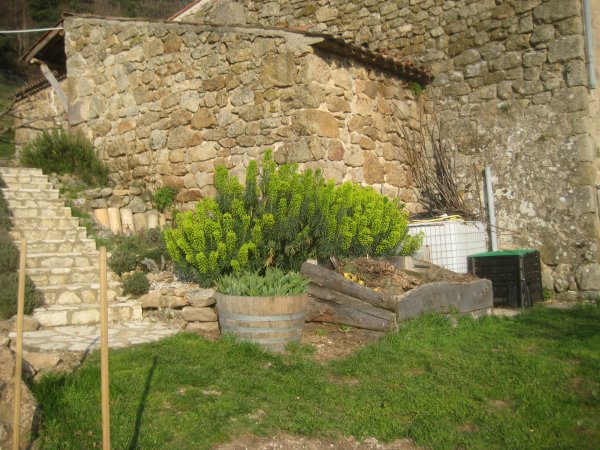 So in went the lot: purple and green sage, and the decorative Salvia caradonnas which give such an attractive purple flower in late spring.  I am told that if I dead head the caradonnas I will get a second flush in the same season.

I dead head. They don’t give me a second flush. Ever. But I live in hope.

I then had an ambitious plan to grow artichokes here. I even was foolish enough to name this the Artichoke Bed on my early maps.  But they only lasted one very cold winter when I couldn’t keep the snow off them and then they hated the cold spring. 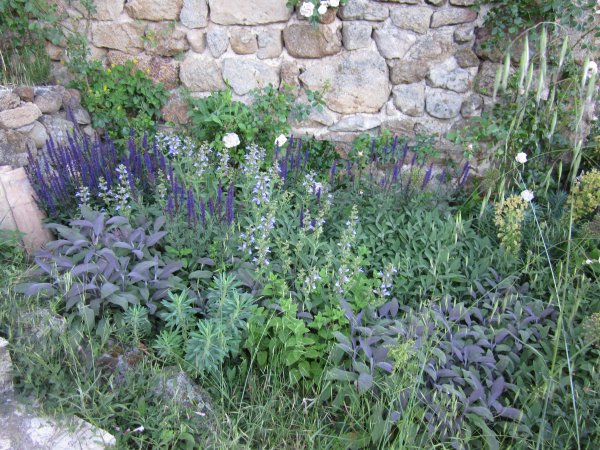 And I added in parsley, tried chives (all died) and generally left things to fight out for themselves.

For some structural height I invested in three rose New Dawn climbers from David Austin.  They are delighted with their west-facing warm stone wall.  They grow like mad. And are floriferous. But annoyingly, they have absolutely no scent. 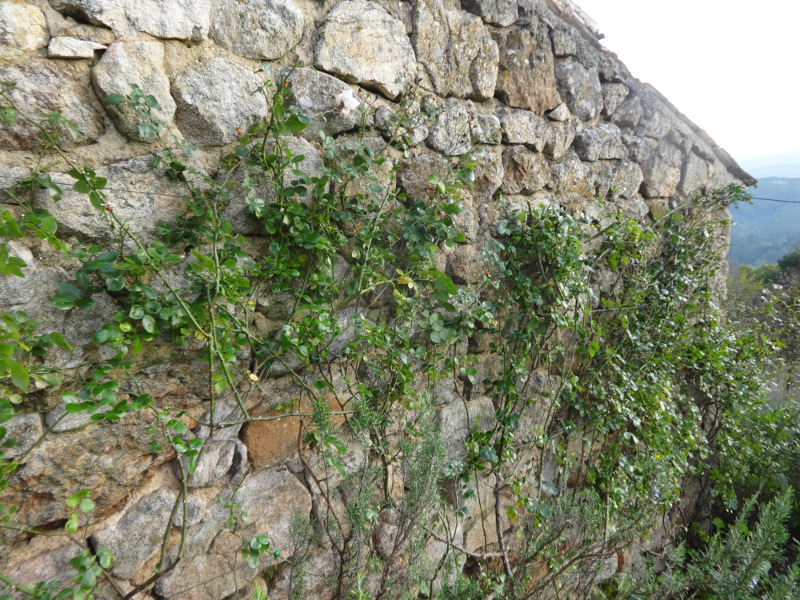 Thank goodness the Gertrude Jekyll roses I bought at the same time have been so stellar. Otherwise there would have been Words. 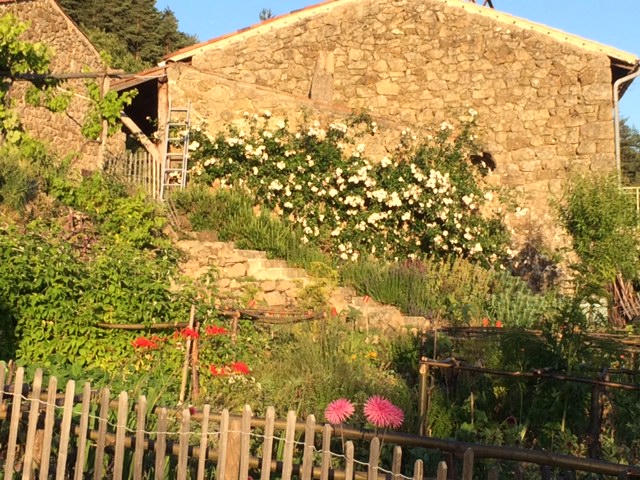 And for some shrubby interest at the front of this herb bed I planted out five small euphorbia wulfenniis.  These have been one of the best plants in this garden; in fact most of the euphorbias have proved great plants.  They keep on giving as they self-seed so brilliantly. 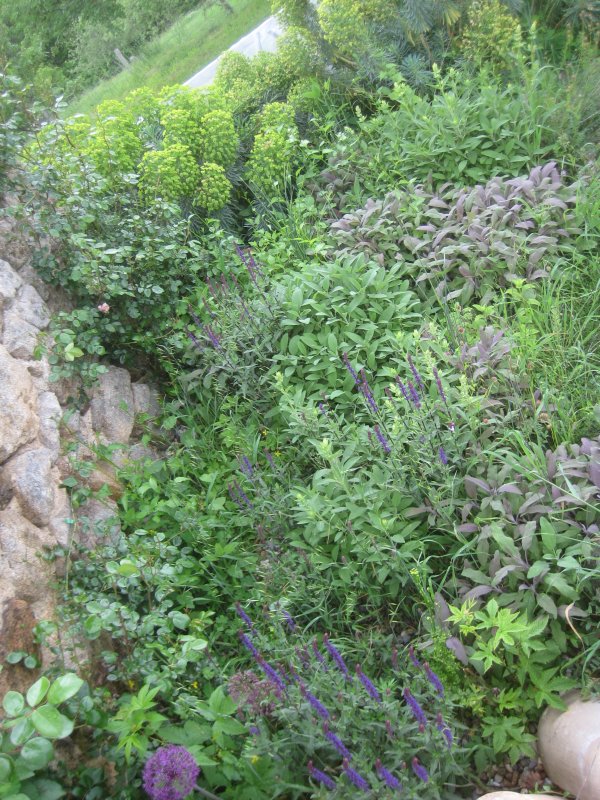 A little too brilliantly in this little bed.  But you just have to be vigilant and have a good hard prune or pull them out when young. With gloves on.

I tend to let them flower as the display is so stunning when not much else is up in early spring, and then cut the flowering stalks right down before they set seed.  If you are weeding nearby in early summer you will hear the exploding seed pods as the euphorbia sends its offspring out and into the rest of the garden.  You have to admire how successful they are; even if they ruin your garden design. 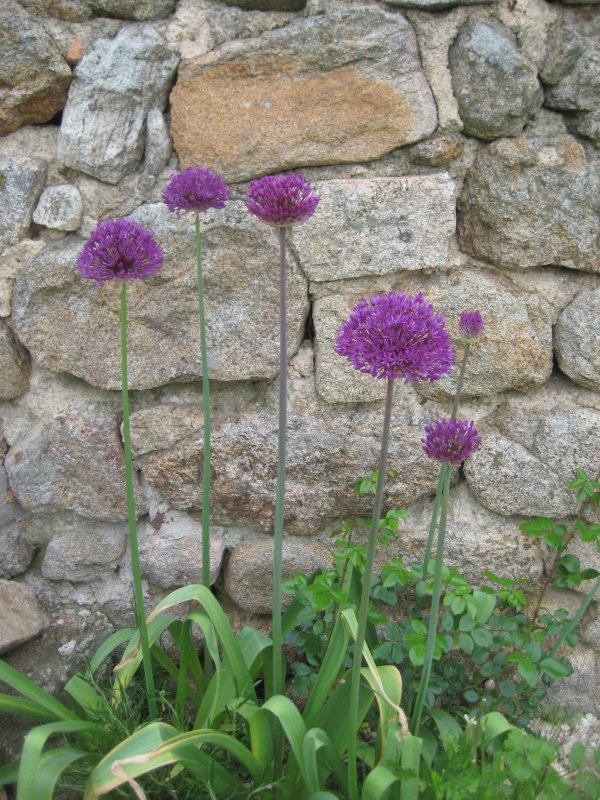 The sages have proved a fascinating study.  Caradonnas are ballerinas in temperament for me, and are very hard to propagate.  The green sage flowers too well and I must cut back very hard in spring; and the purple sage have been the Goldilocks of the herb garden. Just right.  They are attractive all year, require only one prune in early spring, and I can make new plants from the cuttings every time.

In between these herbs I plant as many bulbs as I can.  I try and plant the alliums as close to the base of any clump of sage so the wretched looking leaves are hidden by the rest of the foliage.  But the tulips stand proud and are utterly crammed.  They don’t return so I have to treat them like an annual.

I could say they are just exhausted from flowering, but I also have a mole rat that lives somewhere underground here.  I’ve lost parsley plants (juicy roots) and almost all the Allium bulbs and tulip bulbs as soon as they are over.  But we are sharing and I try not to despair. 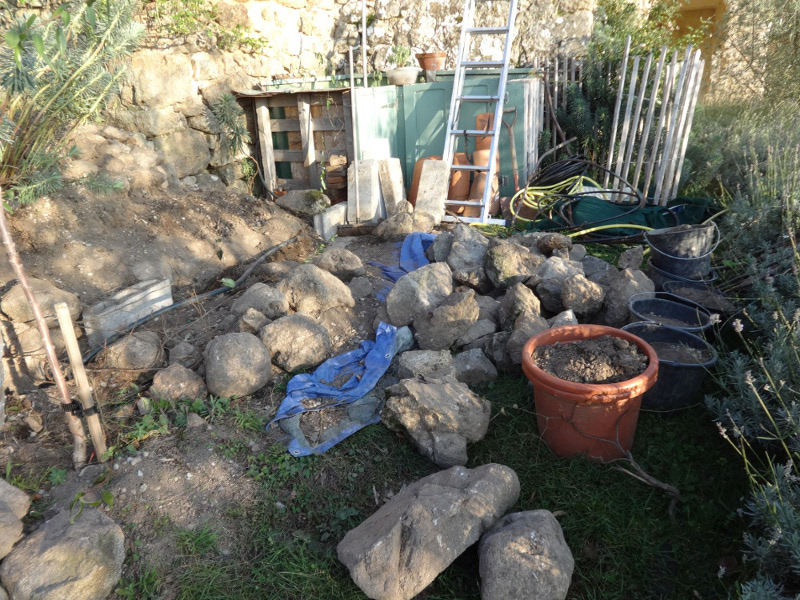 I have actually taken to planting all my parsley in pots in the vegetable garden which thwarts the little critter.  And luckily I join in on Andrew’s wholesale bulb order every autumn so my costs are absurdly cheap for even 1000 bulbs.

In 2014 I put in a new compost bed around the corner from this herb garden, and realised that the front of the herb bed was very shabby indeed.  The old compost bins used to sit in front. And I learned when I dismantled them that they were actually propping up the entire bed.  And the October 2013 floods didn’t help as this entire area was washed away, leaving behind the sturdiest of the sages, the euphorbias and a mysterious patch of lusty stinging nettles. I have no idea where they came from. 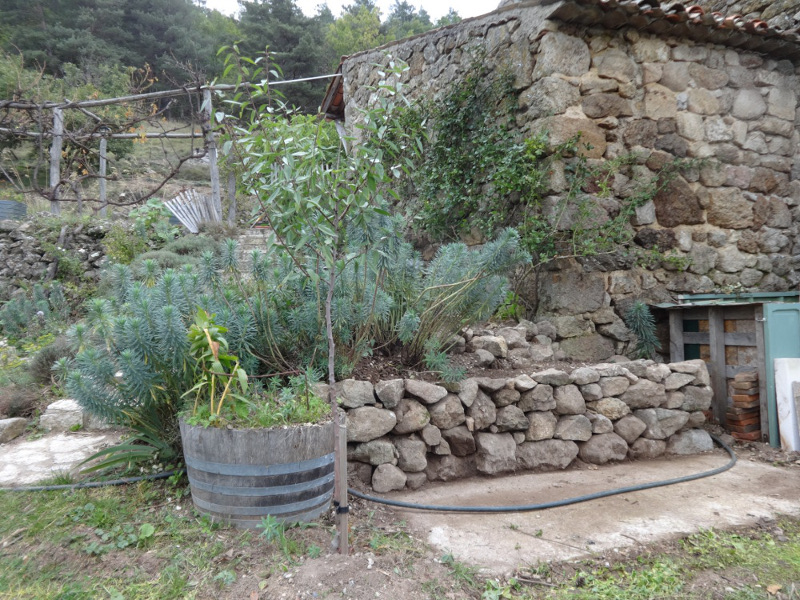 So a massive reorganisation took place.  And on this farm, that means a new wall.

I made a start by collecting the rocks and clearing the site. And then I booked a morning of busy Nicolas, the stone mason’s time. Yes, just a morning. And here is the result.  I do love a neat and tidy wall.

I have planted up the bed with strawberries (grown from runners in the potager) and will monitor the invading euphorbias beside them very carefully. 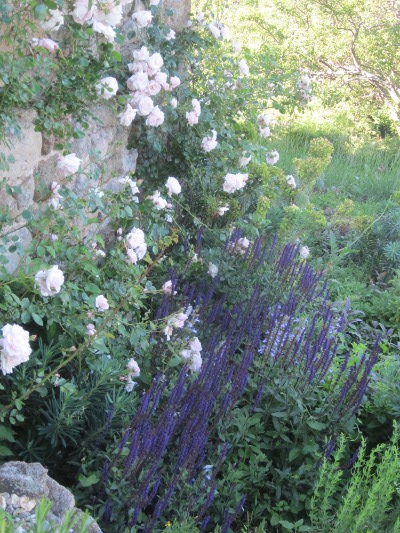 Down the edge of the path I planted thymes and eventually Hyssopus officianalis.  I suspect all the thymes on one side died, and I had some hyssop plants at hand.

And in fact the hyssop has proved very useful. I must admit I don’t use it in any tisanes or tinctures, but the flowers follow on straight after the Salvia caradonnas have given up for the year. 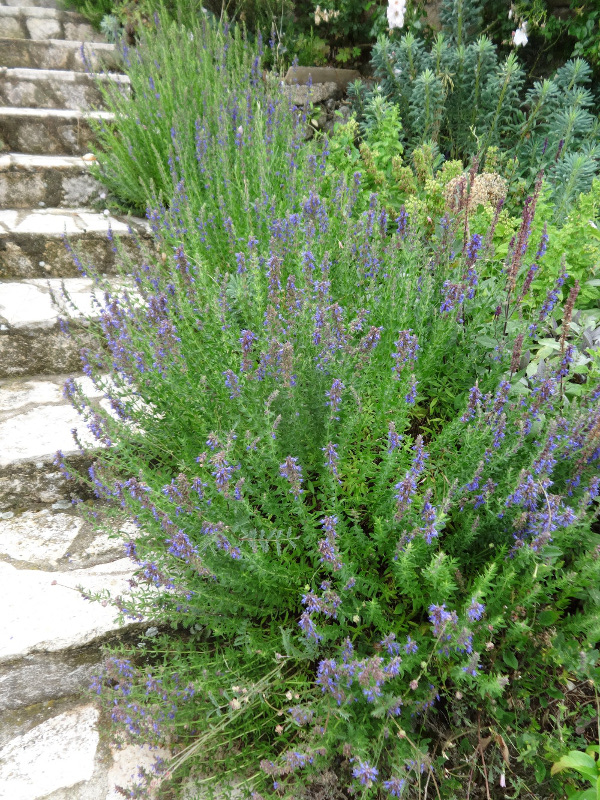 Secession planting of the unintentional kind. My kind of gardening.

In the years since I wrote this Farm Tour story about the herb garden there have been a few changes to this small part of the garden. And that surprised me as I think of it as one of the least visited and least ‘worked’ areas.

But perception is a strange thing: I just leave a lot of this area alone.  But not the builders. In 2017 all the exterior of our two farm buildings were throughly altered. For the first time in a few hundred years the walls were repointed. New mortar applied. Or in the case of a lot of walls, mortar was applied. There wasn’t much holding up the stones.

I had thought we would spare this wall of the herb garden (‘the rose!’). But no. So one early spring day I cut back the rosa New Dawn climber to bare stalks and gave Bebère and Etienne a demonstration of what emerging alliums and tulips look like. They would be stomping about this bed for a week, scraping out and remortaring.

Bless them. It was a bit wasted, and I had a lot of casualties. 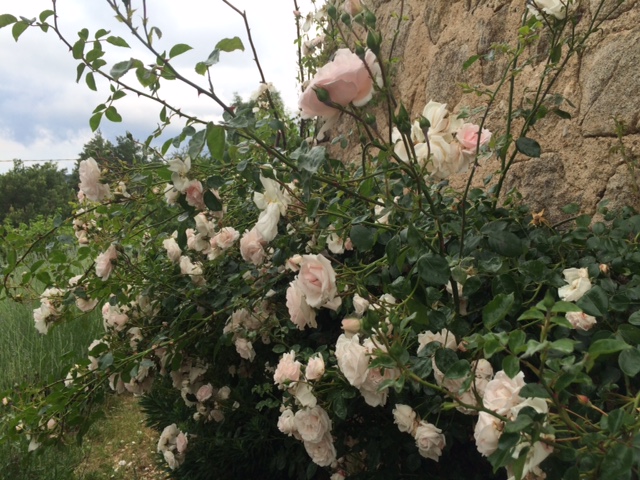 But the result was a perfect new wall. And the climbers really benefited from the hard, hard pruning. I would never have dared to go that far in my cutting back. 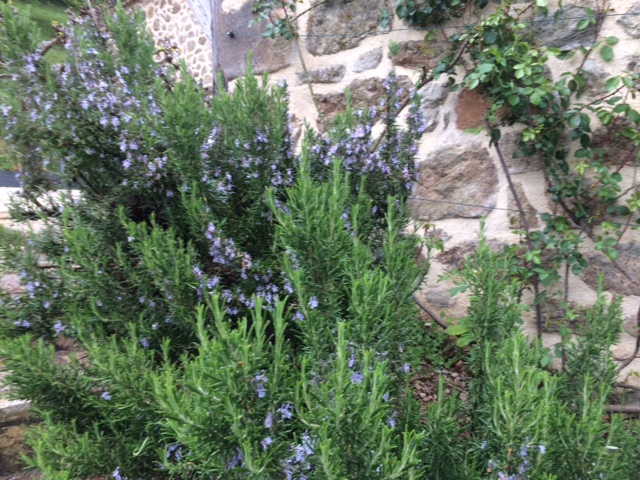 The rosemary at the top of the bed leans a bit more than usual. I had to resort to tying it back with hidden string. But what I really need to do is be radical and cut it right back and start again. But who does that? It’s prolific, evergreen and has early flowers for the bees. 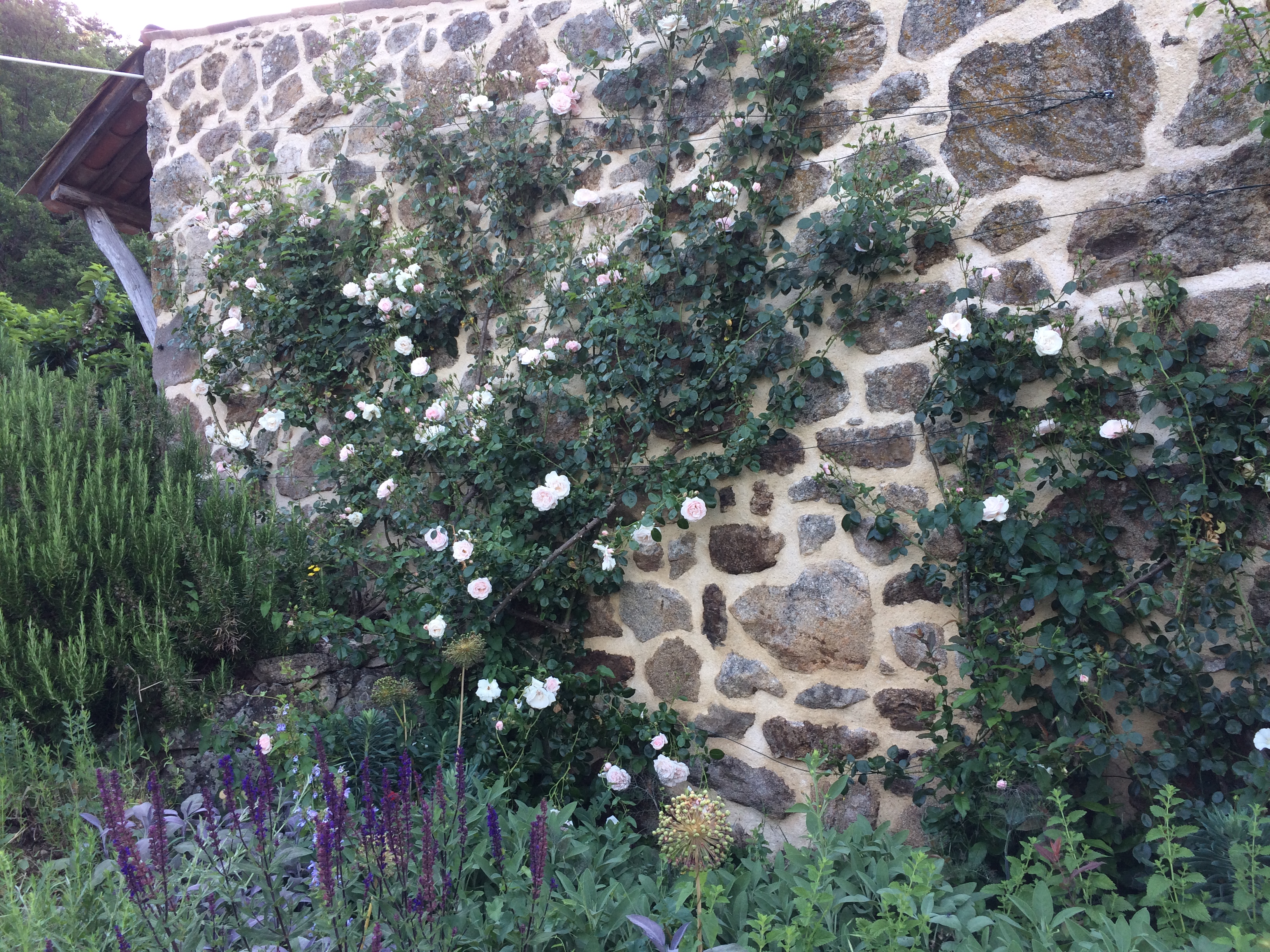 With trampled beds I was able to see that a lot of the sages are way too woody and misshapen (yep, inattentive pruning on my part), so I have decided to try and add more shrubs to fill the gaps. We shall see if the Rosemary Miss Jessops’s upright plants I took from cuttings do as they are told and remain upright under the huge canopy of climbing rose above.

I may have lost all my Salvia caradonna shrubs in the hard drought of 2016. So let’s just have one last look… if they are all dead, I shan’t be replanting them. 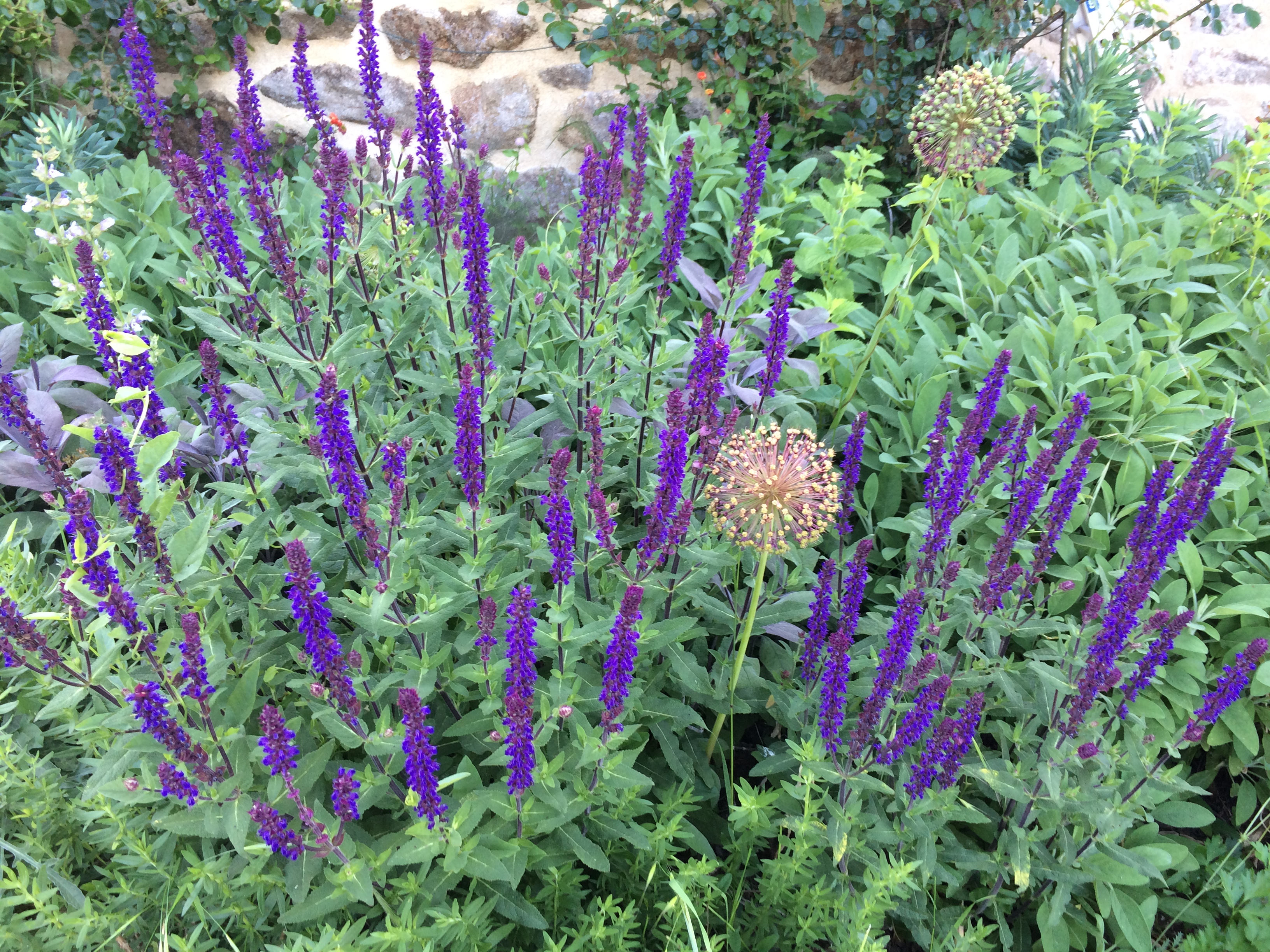 The biggest change of all was the extension I made to the herb garden on the other side of the steps. This was always a tricky corner.

Hideous more than tricky. Dare I show you how bad it was? Oh, go on. 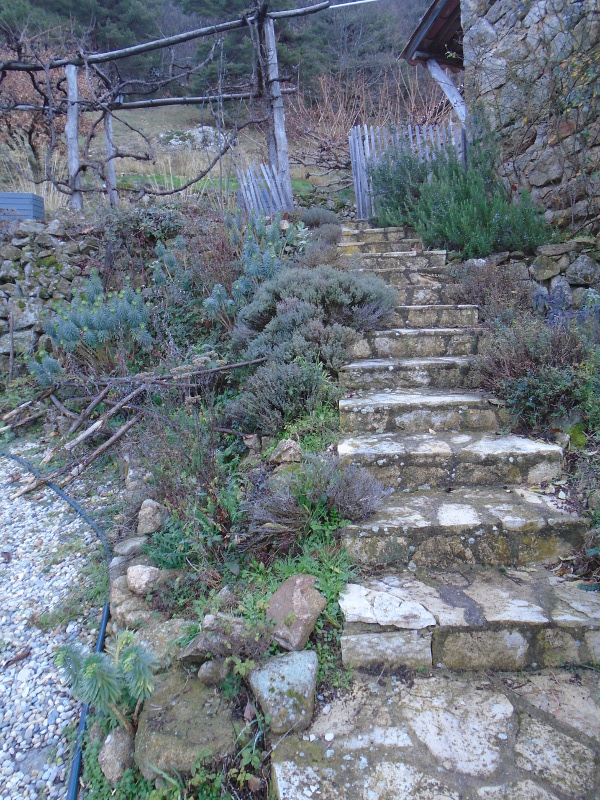 Yep. That bad. So another day booked up for Nicolas the wall builder and it was transformed.

I had a plan for just one herb in this part of the garden. Thyme. It really needs full sun and no shading from any plant.

So I ordered a dozen from Filippi and planted them properly.

And after a year they took on the right size and shape for the plot.

Now this is what a herb garden should look like. 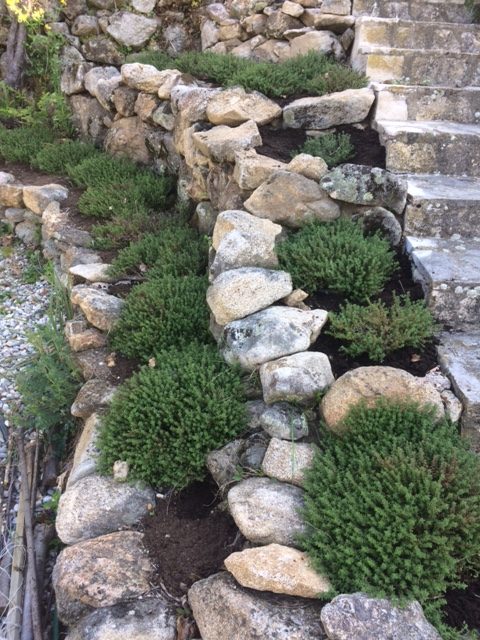 To finish up (this is way too many words and pictures for a tiny part of the garden) the front of the herb garden was also transformed.

I used to have compost bins here once. But the builders needed to get at the walls behind so the compost bins were dismantled and the contents flung onto a huge heap under the plums.

Once the work was done I couldn’t possibly put them back. It’s way too handsome an area now. And a sun trap in the afternoon. (As if we need more sun!)

I now have elegant seating, pots of alliums, new roses to try and establish on the now pointed walls. And one day I may even have leisure to actually sit and rest and look and admire. 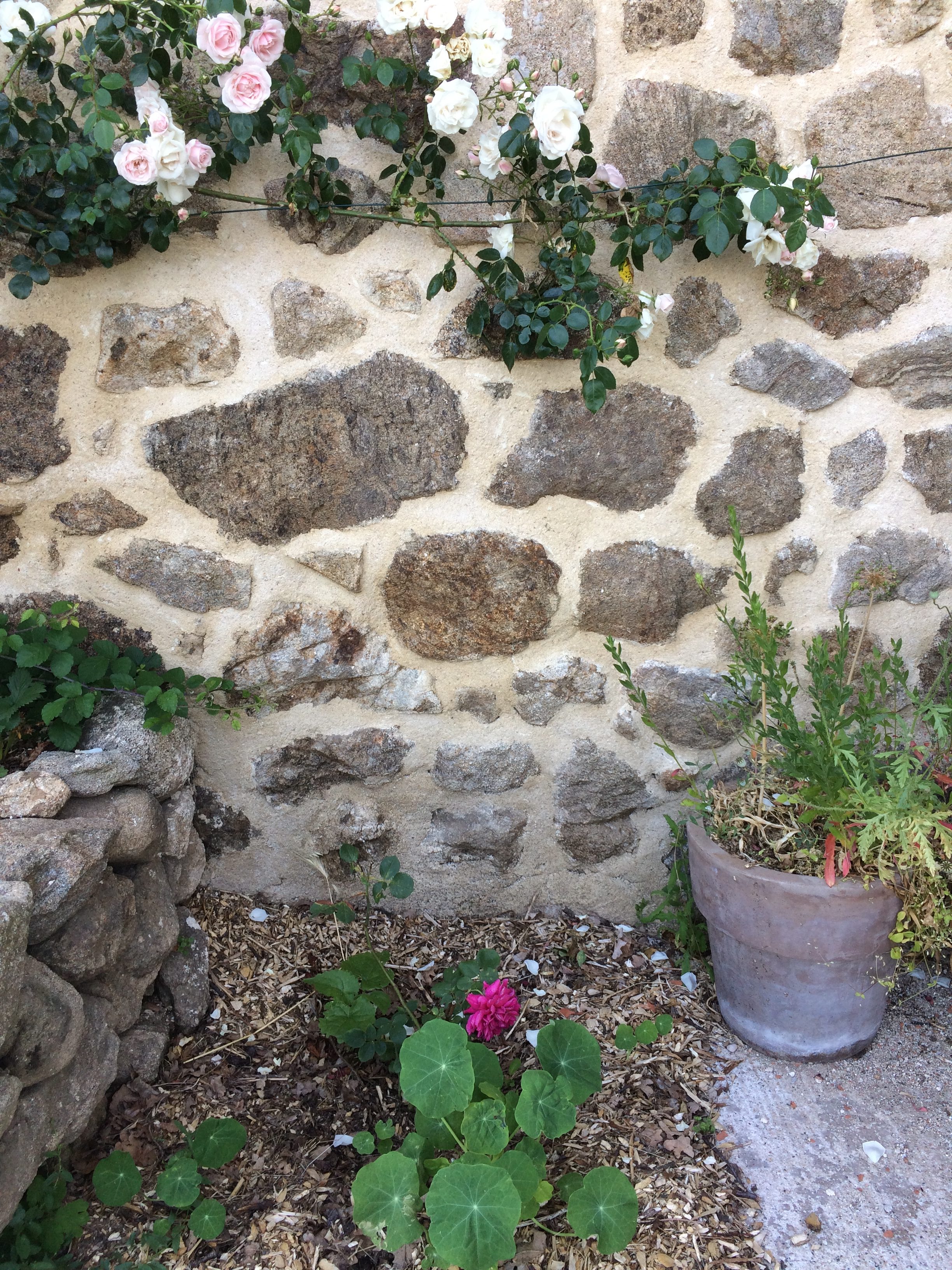 My leisured tally of sitting in this seat so far – four minutes. And then I lunged off and pulled more self seeding weeds out of the base of the herb garden. At least I tried. 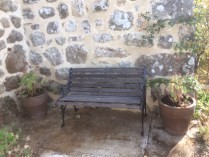 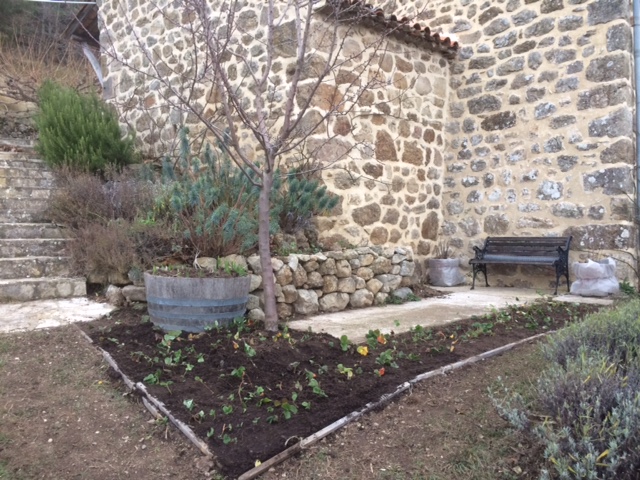