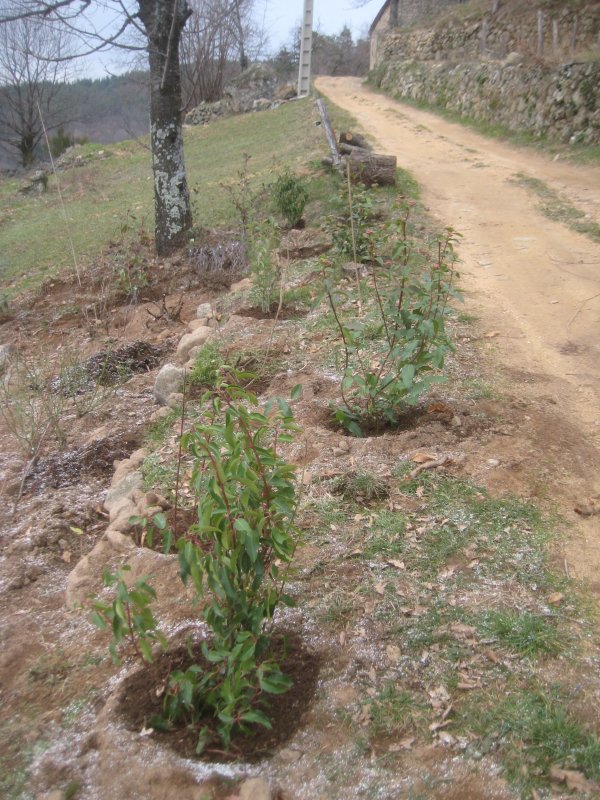 Was it the influential French garden designer Gilles Clément who described solid single species hedging as green concrete? It sounds like something he would say.

I do admire that man. 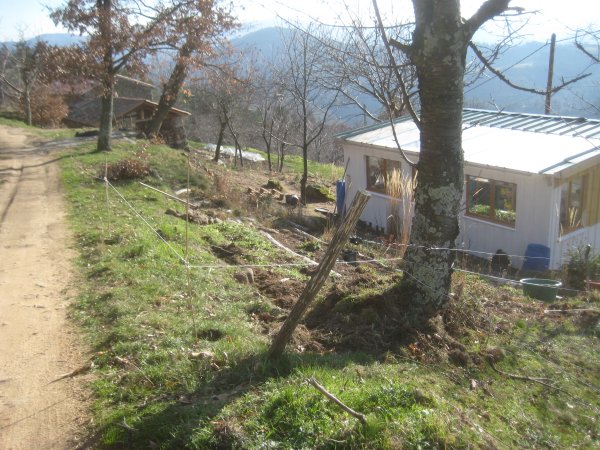 This hedge was thrust upon me by our dear neighbour Jean Daniel who was reeling in shock from my outrageously large potting shed.  I wish he had actually thrust the hedge upon me; it has taken years of work. 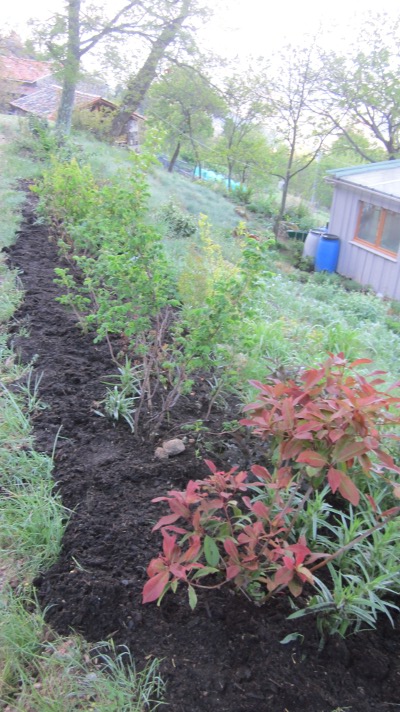 No, he demanded I do something to try and disguise the carbuncle of ugliness that was my potting shed when it was first constructed.  He uses the access road that goes straight past this part of the garden four times a day. Or more often if he has forgotten his mobile phone and goes fast in reverse all the way back to his farm.

Some weeks I can set my clock by his vehicle. First I will hear his horse Ulysse whinny as he drives out of his farm, then I will know if he is late for a 9am meeting at the mayor’s office (he is the deputy mayor), back at 123pm for lunch, out at 2pm, back at 6pm. And sometimes out again for a 7pm or 8pm municipal meeting or a classical music concert. 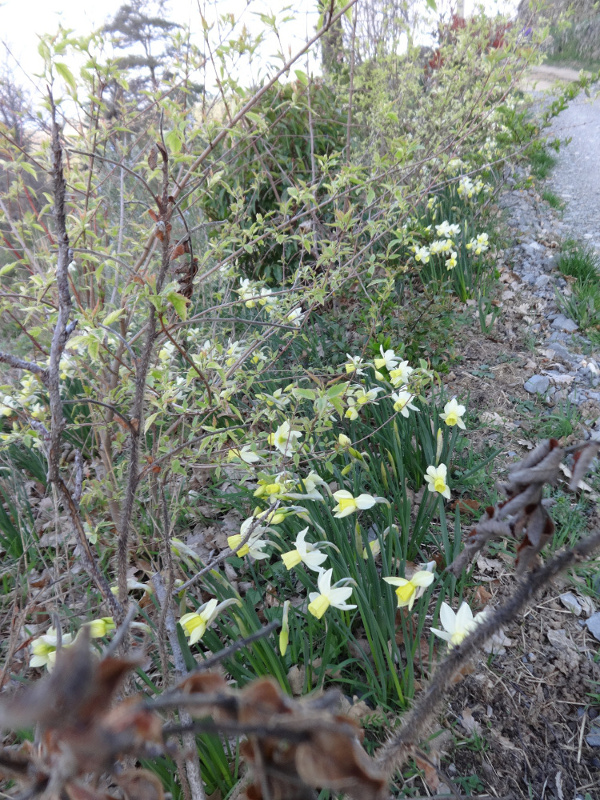 He is very devoted to public service in our rural mountain village.  And the least I could do is help him have a happy drive.

Luckily Nicolas was working on some wall building when Jean Daniel raced over and implored us to do something to hide the shed.  A hedge. Please plant a hedge. Something fast growing and green.

‘Not a problem’, interjected Nicolas before I had a chance to ask ‘where on earth do I buy hedging plants here’ and launch into a how much I hate evergreen hedging.

‘Lindy can drive down to Vachon plant nursery on the Rhone this afternoon and we will have it planted up by tomorrow.’ 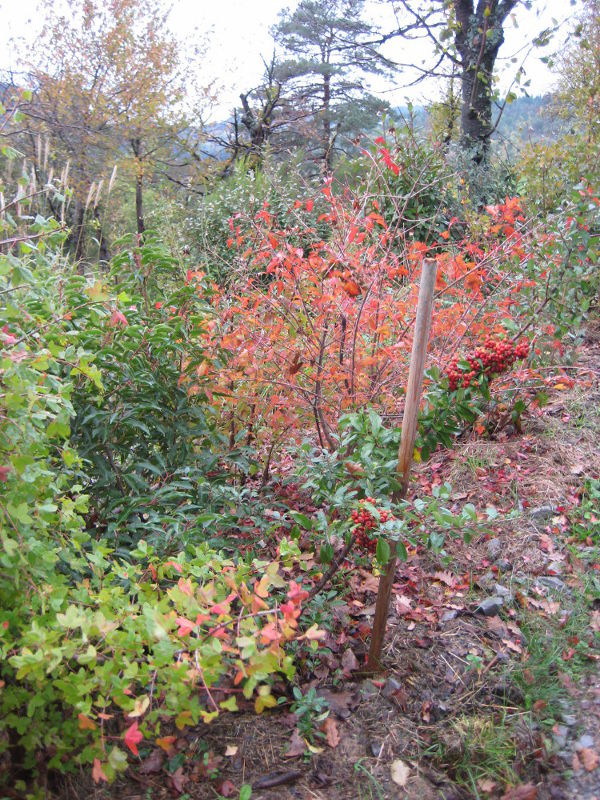 Well. Talk about instant gardening.  Then and there Nicolas sat down and wrote me out of list of the mixed hedging that would do particularly well on this dry and exposed site.

We measured it out and the area was vast. We needed at least 45 shrubs. A hedge that would start at the road and run all along the edge of the property down to the end of the shed.  And another that would sit parallel to the dirt track and go as far as the tall oak tree. 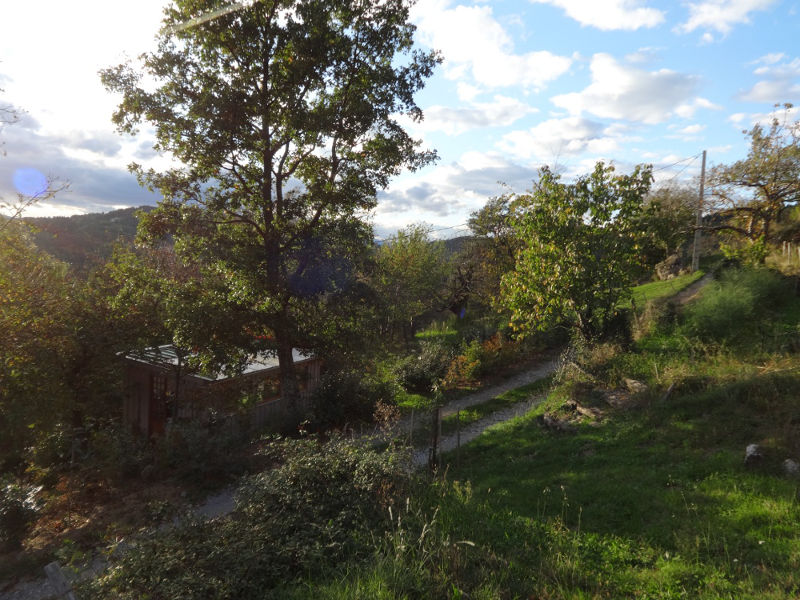 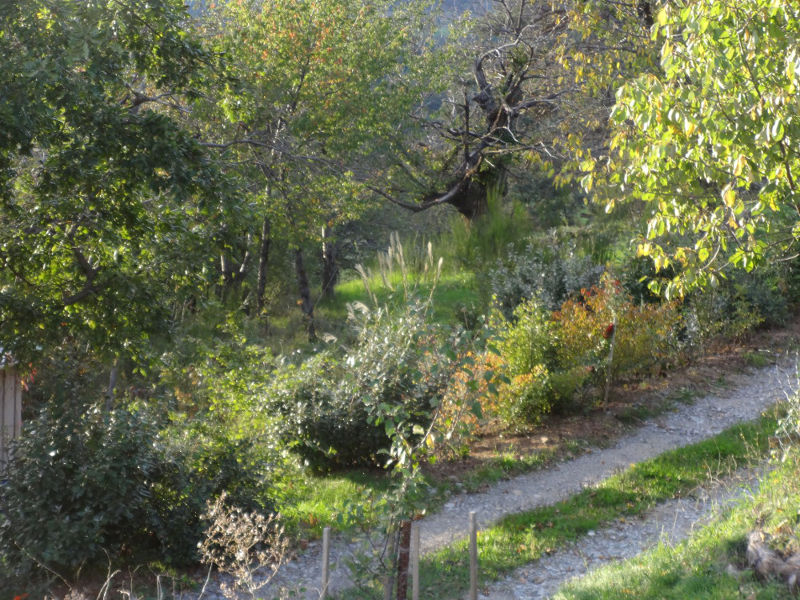 Thank goodness the huge and scary plant nursery he mentioned had all the plants in stock.  It’s not a help yourself place.  You have to drive through the gates and meet the owner.  She will then decide if she likes you and walk ahead of your car to the vast, football sized pitch nursery bed.

Up and down the rows, you cram your car with plants and then go back to the overheated stuffy office (complete with slobbering St Bernard dogs) and hand over your money. She does not do cards. She barely likes cheques. So you have to come prepared.

Actually in recent years the scary owner has handed over dealing with the public (it never was her forte) to a young woman whom I have an excellent relationship. She even trusts me to go and fetch my plants myself. Progress. 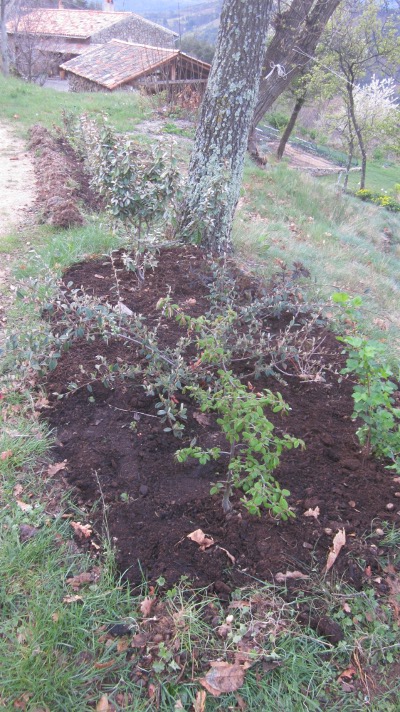 So we were as good as our word. Mass planting.  I let Nicolas space and chose which should go where. We have a mix of evergreen and deciduous.  And things are coming along nicely.

I do have trouble weeding this site. Some years I put in a good winter’s effort and then mulch heavily in spring. Other years I just get too busy elsewhere and leave the shrubs to fight it out.  I underplanted with a lot of narcissus bulbs so it’s fun to ogle in spring. 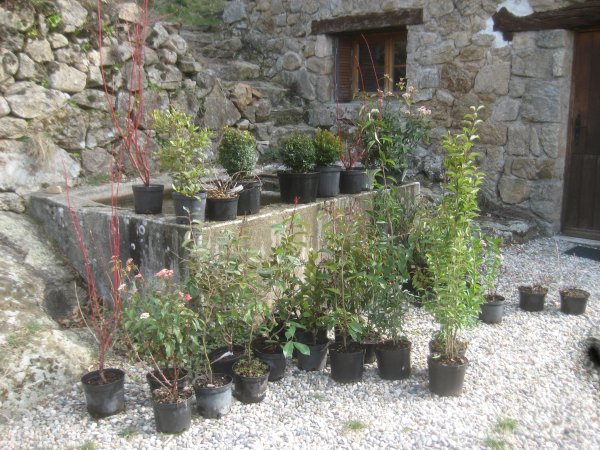 Unless Ulysse escapes and munches his way down the hedge.

And since the original planting has worked – the sambuscus nigra don’t like the hot, dry climate – I have now greatly extended the hedge. 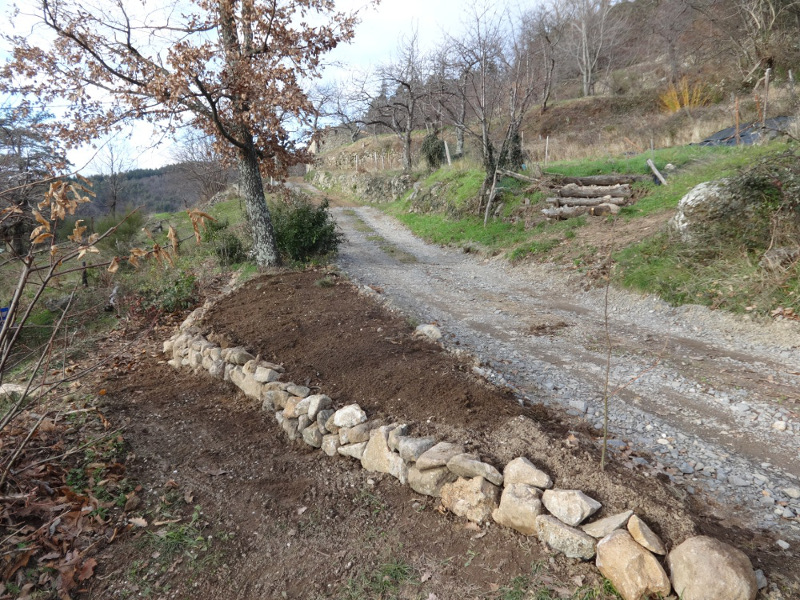 You would think that it would be the first thing one would plant to create a bit of privacy.  So I am a slow starter.

But now I am very keen to have the garden a bit more enclosed. After all, the borrowed landscape is in front of us, facing south, rather than up north into the forest.

And I have found some firm favourites among the original hedging plants. 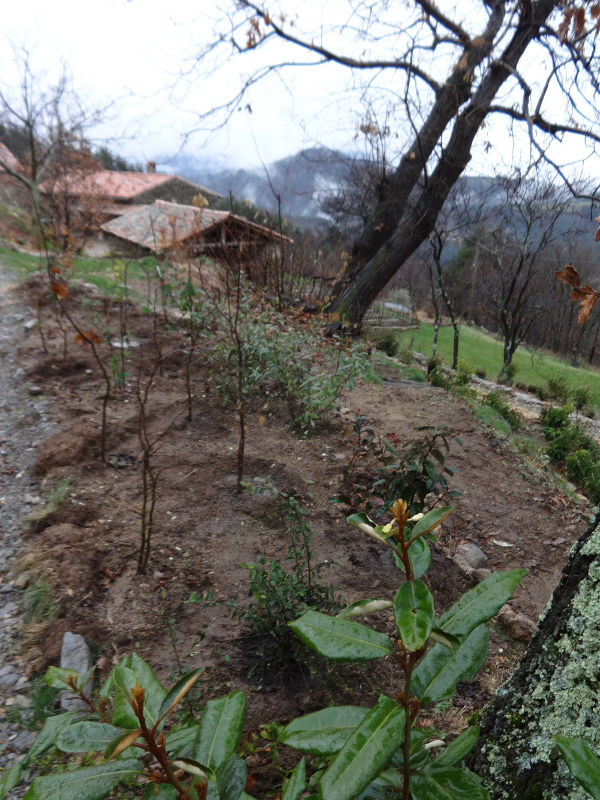 I don’t bother with rosa rugosa in our climate. The flowers are stunning, but the dying branches of the rose are too thorny and too unsightly to put up with a two-week flowering fancy.

The eleagnus, viburnum tinus, cotoneaster and of course, the mighty hornbeams are my firm favourites. 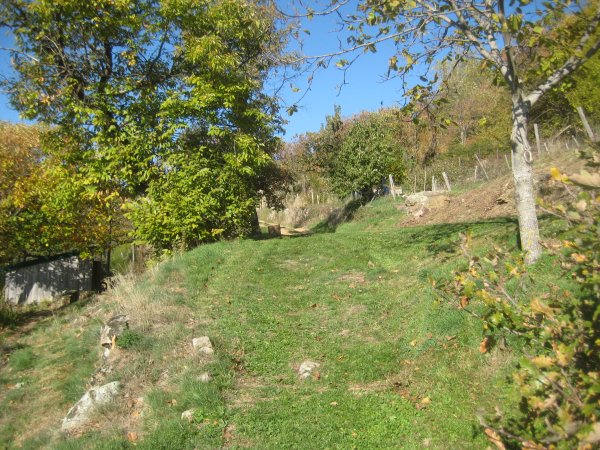 The cotoneaster are a touch floppy for a beside the road hedge, but the hornbeams have saved me for year round structure.

Their leaves do turn brown in autumn, but the leaves stay on the plant. Only dropping in spring when the new growth pushes through.  And they are wonderfully upright in structure. 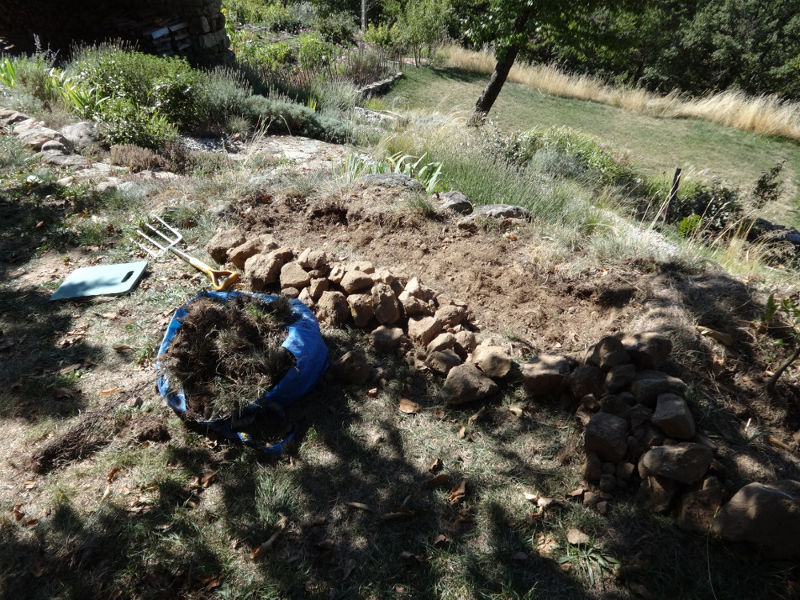 You can see that I’ve gone quite mad in planting them.  And why the young employee at Vachon knows me so well. I never can seem to buy enough.  Thank goodness they only cost 3 euros 50 a shrub.

Now planting anything on this farm is never an easy task.

Here are a few action shots of the hedge area I wanted to plant up just below the road, in front of the walnut bank. 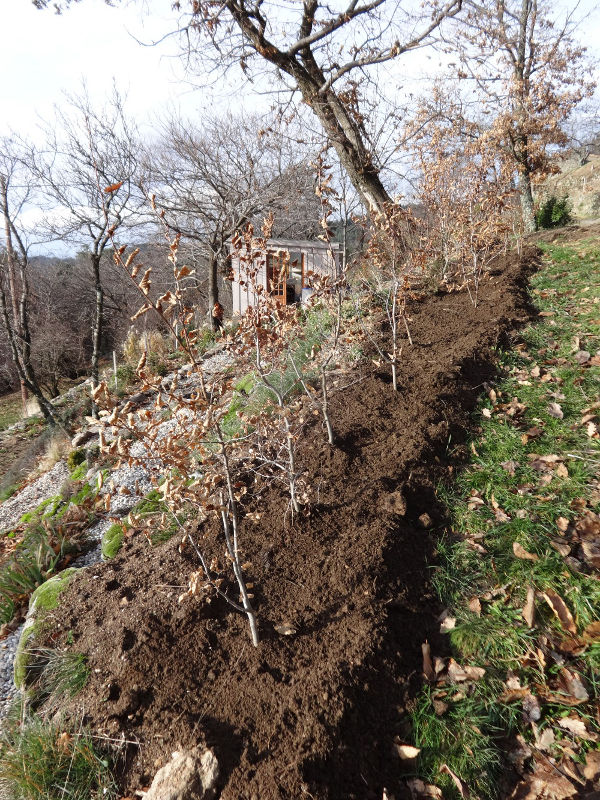 First I had to excavate hundreds of stones and rocks.  The mighty bulldog fork is the only tool for this task. It takes ages to prize up the stones.

Then a quick dig over of the area. It is bone dry here. So once I’ve dug over, I tend to put down a thick mulch of my home-made bark and stick chips. 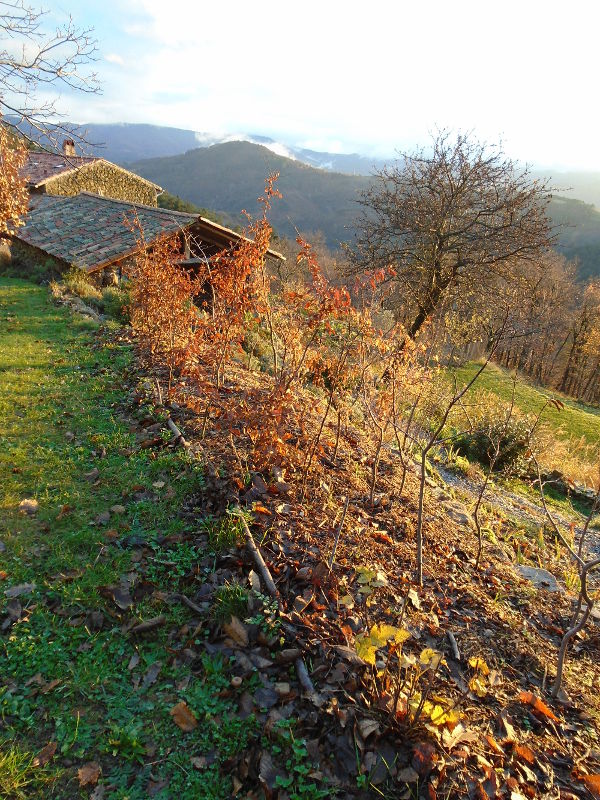 If I were not so impatient, I would leave the area for a year with a thick mulch to improve the soil and increase the health of the soil.

But I am impatient. I came to gardening late and want this garden romping away in the shortest possible time.

And you can see from this garden that things don’t grow quickly.  The hedge plants do put on growth, but if you are used to high rainfall and lush garden scenes, you won’t get it here.