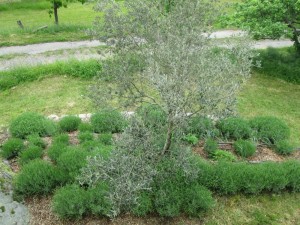 The things we end up doing for the Ministry of Culture. Tomorrow morning I have to stand up in front of (a hopefully) small crowd of people in the nearby village of St Pierreville to give a talk.  45 to 60 minutes about dry climate gardening.

I’ll try and nab a poster so you can see it in all its glory. On their website they proudly announce that for the 10th annual fete des plantes : A 10h30 : Venez écouter Lindy Sinclair, spécialiste des jardins secs, salle du conseil en mairie.

Specialiste! Hah! This is knee knocking scary. So I can’t write more here; I have to go through my talk one more time. And I’ve already had a small whisky.

Today was the first day it didn’t rain here so I celebrated by weeding the lavender bed, and adding this picture to the slide show.  And sorting out all my potager supports. And tying in the honeysuckle. 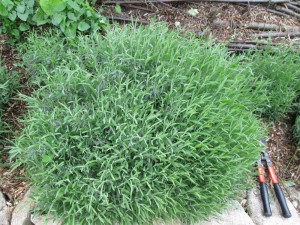 But the big drama of the day was the cat drama. Artur had not one, but three ticks on his neck.  No wonder the poor critter is just sleeping all day. And demanding cuddles. Maybe it’s the clever thing with cats – he was trying to get me to groom him to check. Who knows? But I found one huge engorged beast under his chin.

I spent a few hours trying to get him docile enough to try and do the dental floss knot trick to stangle the tick and get him to retract his jaws. (Or her jaws.)  But Artur was fussing too much. So I’m afraid that eventually I just had to pull it off.It wasn’t hard as I think the tick had had its feed and was ready to drop. 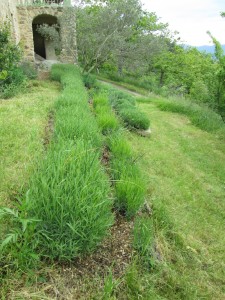 But later as I was tying in the peas Artur actually emerged from the potting shed and came to visit me. I stroked his chin again and found two more! Ugh.

So Jean Daniel is on alert in case he gets very wobbly. I’ll be away until tomorrow afternoon, so I won’t be able to keep a close eye on him.   Poor little cat.

And on that mild note of panic I’ll sign off.