Planting out in the potager 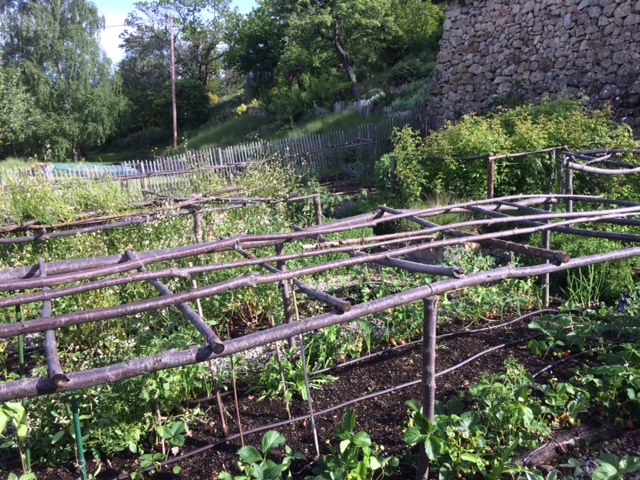 Two hours. I think I have just lost two hours. Forced indoors when I still had planting to do.  It’s only 6pm.

There is a huge thunderstorm working its way from the south of the Ardèche and rumbling and flashing mightily. The power is off so I’m making do with battery power on this laptop until it runs out of juice. Or I run out of energy. Whichever comes first. 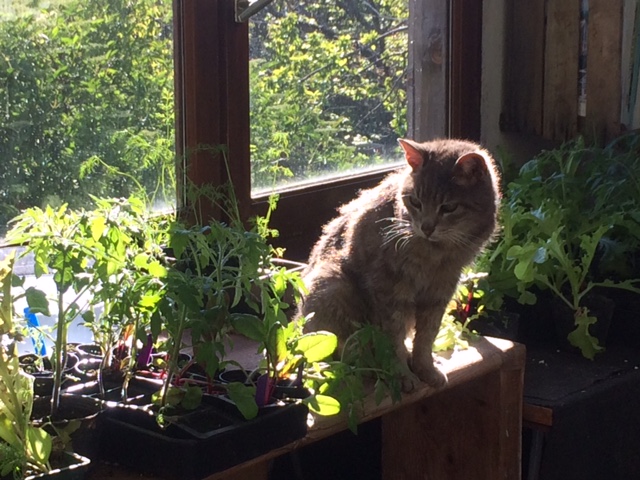 In most cases I wouldn’t be too scared of rain. But the use of my heavy metal Bulldog fork while all around is zinging with lightning didn’t feel wise.

So I did the scrambling sprint to cover, trailing tools and boxes of empty pots and having to dash back to grab my jacket which was shed somewhere in the potager and make it just before getting wet. 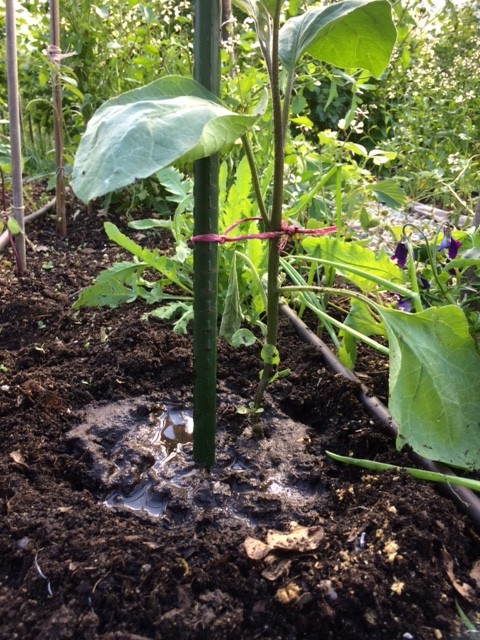 I haven’t done the full head count but there are two gooseberries in pots sitting forlornly in their new soft fruit orchard bed.  I’ll have to retrieve them tomorrow.

Pause. The big black thundercloud over the house looks like a giant spaceship poised to land. Hopefully it will move off and pester someone else. I’m too pleased with my potager work to want to ruin it with anything. Terrestrial or extra T.

My day started a bit too early. Just before 6am. I heard a shriek – and you know how you are dreaming and suddenly reality intrudes. Was it a pine marten in the roof? No. It turned out to be annoying small critter in the form of feline beastliness howling to be let in. Before 6am. 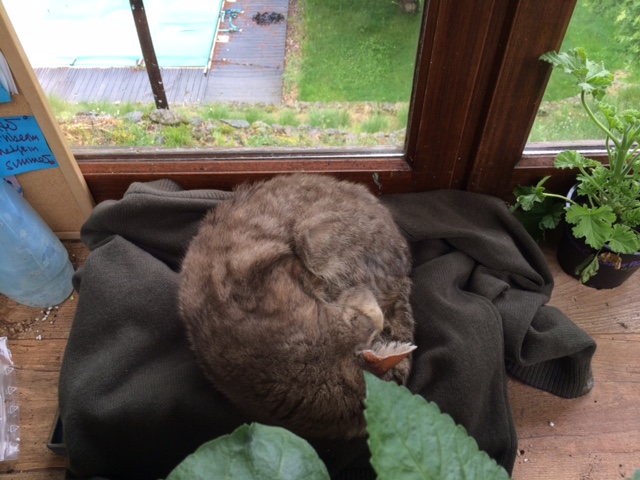 Grrr.  I always assume he sleeps happily in the potting shed overnight. He has one of David’s old cashmere jumpers in a box, so he ought to be content. But I did leave all the windows and doors open last night in there to try and harden off the plants without the tedium of shoving all the pots outside for the daylight hours.  So I guess it was a bit uncomfortable. Or less of a warm nest. The dawn chorus here is quite spectacular so it is noisy early. 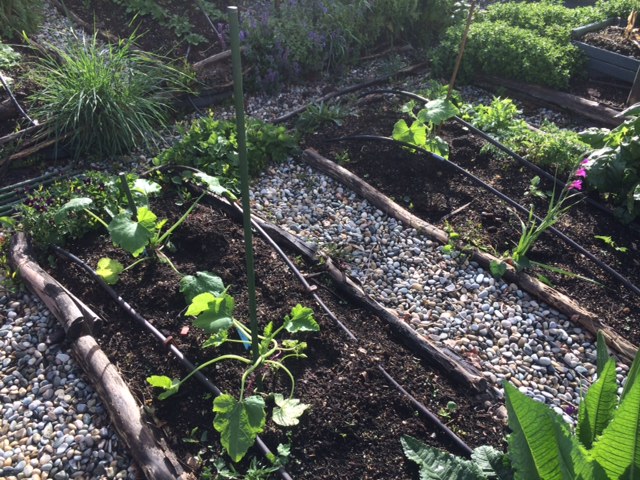 But if he thinks he is going to get fawning attention from that early hour: tough. Right now the plants are the priority. And the whole day was spent planting out.  Basil, dill, exploding cucumbers, swiss chard, eight aubergines, dahlias. I can’t remember the rest.  I earthed up the potatoes. I ate my way through endless strawberries while I hunted slugs in the broad bean patch. I tied in peas.

It was all marvellous and things are filling out nicely. And yes, Artur spent the day with me and had plenty of lap time. 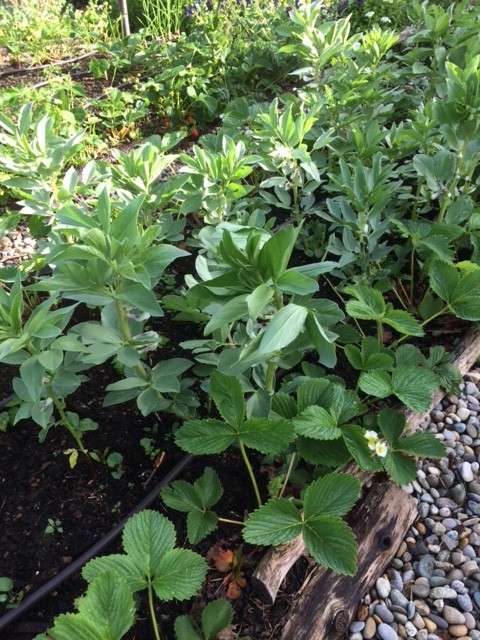 I still have the tomatoes to go. They are a few days off being ready. Quite a few had a bit of a set back last week when we had a frost and the ones closest to the potting shed door caught an evening blast.  I think it’s the Princess Borghese ones which aren’t happy.  But I have so many seedlings that I think there will be more than enough spares. 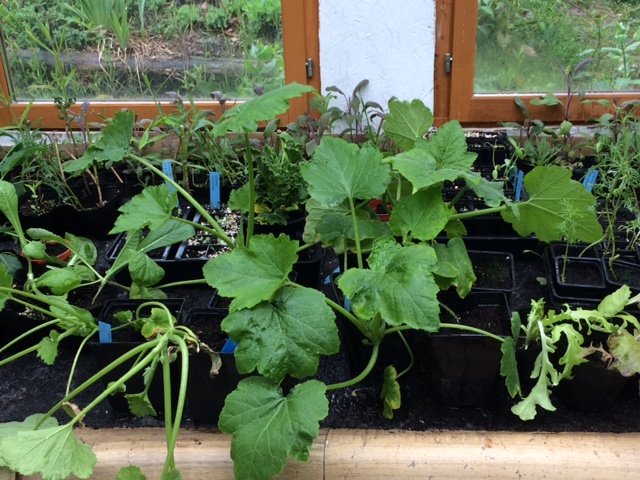 I suspect I’ll lose the will to live once I’ve planted out about forty of the blighters and will be sneaking spare plants to anyone who makes the mistake of coming by. (Dario went away with a box of treats on Friday.)

I just can’t bring myself to composting the extras. 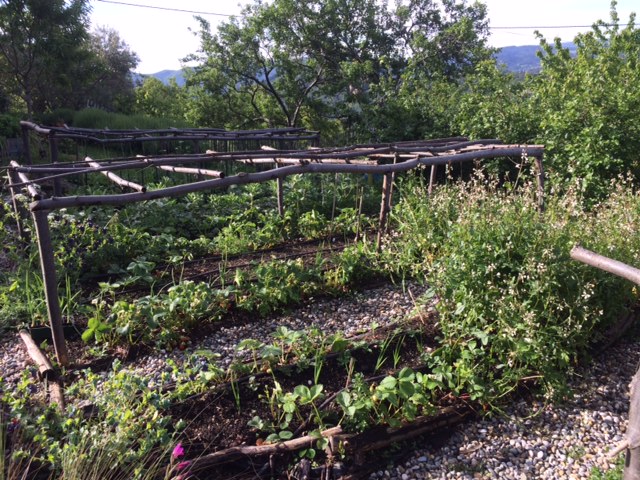 « Meadow mowing in the mountains » Photo round up