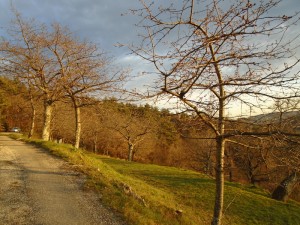 The biggest problem with having an avenue of trees is you tend to concentrate not on the magnificent spectacle; but the gaps.

And here is my gap. An avenue of cherries and one glaring space where a tree expired.

But today I got to fix the problem. Well, the problem will be fixed in about twenty years when this titchy stick turns into a proper tree.

But at least I’m no longer looking at the gap and tutting. 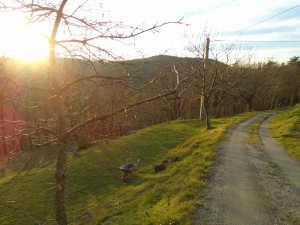 I had hoped to pick up my favourite Noir de Meched, but Cochet had run out. So I am the proud possessor of not one but three trees called Geant d’Hedelfingen.  They are a variety from Germany (1850).  And if the catalogue is to be believed I will soon be feasting on large fruit, dull red in colour, very firm, juicy, sweet, late fruiting cherries – mid to the end of June. And a good tree  qui résiste à l’éclatement’.  What? Doesn’t blow up? No, it resists splitting. I had to go to the dictionary to check before my fancies raced away with me.

So in all a good late cherry which should cope with our mountain climate and produce good fruit. And hopefully it will grow away faster before the resident deer population and random escaping horses can reduce it to sticks. 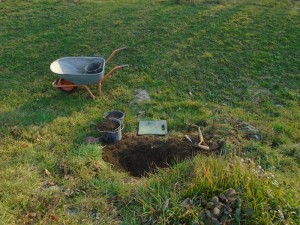 The plant nursery is a mere hour and forty minutes away. Over two mountain ranges. But I had arranged for Andrew to be there collecting his trees at the same time, so it was quite the outing. We even snuck away to Rochemaure for lunch.

I picked up the three cherries, one apricot (Bergeron), a sack of strawberry plants. And I had hoped, two kiwi vines.  But they weren’t in the big sack when I got home. We collected the parcels of trees away from the main house in a field a few kilometres away, and I guess stock control was lacking for once. Usually they are exceptionally reliable.

But I’m not returning for two small vines. (The variety is actually Kiwai assai, a very cold tolerant beast which can go down to minus 25C.  The fruit are smaller, but still kiwi-esque.  I guess I won’t know how they really taste this year unless Frederic posts them to me.  Or my neighbour Madame Acton is late with her Cochet order too. 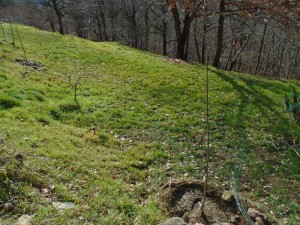 We were certainly late. I usually collect before Christmas.

The tree planting is dead simple. I no longer improve my soil. Just dig the deep and wide hole to remove any competition from weeds. Soak the bare root plant in a bucket of water for an hour before planting.  Keep the graft above the ground (so I can keep an eye on any unwanted suckers appearing below the graft) and back fill with my very ordinary soil. 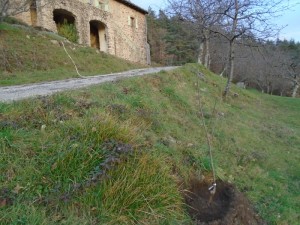 I planted one beside the now four year old noir de meched. And the other right next to the stables.  This one is in waving distance of two venerable black cherries on the terrace above.  And if I were sensible I would cut them down.

The juicy fruit is way too high to collect owing to all the branches dying from below.  I can’t tell you frustrating it is to see the fruit and not be able to reach.  I do keep a ladder here in spring. A very tall ladder; but there are limits to how much I am going to risk life and limb just to get yet more handfuls of cherries. 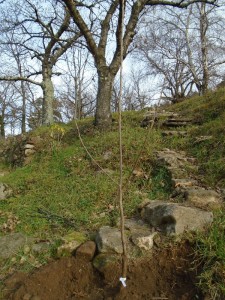 I swear one year you are going to find me dangling half off a ladder clutching the elusive fruit in my fist while trying to cling on with the other.

So new trees. New, properly pruned trees it is to be.

I will prune them in a month’s time when we can be sure that winter (so far a big fizz but you never know) really doesn’t slam into the mountain and freeze the fruit.