Perfidious albion on the mountain top 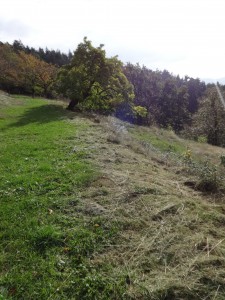 Thwarted. Crushed. No moped puttered its way up the hill. Manu texted me (wimp!) to say he can’t come after all. Maybe Monday.

So despite a power breakfast and being poised and ready with a selection of spades and shovels, I was left with a ‘now what?’ moment just after breakfast.

I felt adrift. But not for long. I beetled up to the tip to drop off wood offcuts and bits of marine ply and rolls of wire that even I wouldn’t keep.

And then on to town to see my mates, buy supplies from the agricultural supply shop, stop by the peerless cooperative food shop for a piece of divine (and rather expensive) sharp mountain sheep cheese.

Then on to the knife sharpener who comes once a fortnight to get my secateurs honed to a fine point. A loaf of bread (and how did that get in there? an eclair au chocolat) and I was back at the farm just after 930am.

I normally go up to the potting shed with a cup of tea and my Thursday market day treat. That way Artur and I can enjoy a bit of a chat and he can try and fail to eat my eclair. 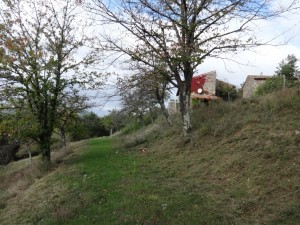 But he wasn’t to be seen. Naturally it was way too early to indulge in such a sweet treat. On top of the huge breakfast. No one in their right mind would scoff such sweet things so early in the day….

I did. Habits and all that.

But I did go up to my neighbours with a large bouquet of flowers and sought out the cat. He was heaving a bit yesterday so I was worried that he was poorly.

But there he was, sitting in the middle of the living room blithely ignoring Elodie and her vacuum cleaner, snoozing away and generally looking elderly but fine.

So that’s a relief.

And now with my body positively swooshing with sugar and too much food I had to do what a farmer has to do. I have been out on the first terrace below the road strimming weeds.

Brilliant exercise and rather warming work on this chill day.  I need to rake all the grass I have cut on the slopes. And then haul out the mower and turn it into a sward anyone would be proud to own.

Oh, and bag up about twenty huge loads of lovely rich mulch.  I could have done with a helper for that task. Grrrr.

« The power breakfast » The speckled band and a shaky hand