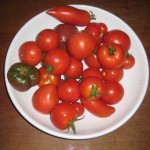 Oh bounty oh glut. Don’t you just love a crop that overwhelms? There I was pootling about the bean poles; tying errant climbing beans into the posts and generally weeding and making good my list of things to do today. When I looked over and spied a positive plethora of tomatoes hiding in the lower reaches of the plants. Down went the tools and out came the basket and here is the result.

The beefsteak looks suspiciously green, but it is ripe underneath. That strange pale pink colour that denotes juiciness but is actually the colour of surgical stockings. And I do love the long skinny tomatoes. Great for novelty value. I shall be saving those seeds for next year.

This was my diabolical plan. Whenever I order a packet of tomato seeds I always sow way too many. They germinate like mad, and then you can’t bring yourself to throw any away. And then you end up with seas and seas of Gardener’s Delight or other such worthy creatures. When what you really want are ten or so of every interesting type to make the salad bowl sing. 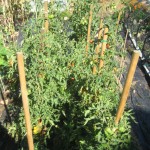 So if I save a few from each, mix them in an envelope, label them as 2010 tomatoes, then I shall have fun sowing, germinating them, and then planting them out. A mystery bag of plants which I know are tasty and do well in the Ardeche.

While I was down in the potager and doing good deeds, I thought it best to get on with dead heading the cosmos as well. They flower so abundantly and give such cheer, it seems a shame not to tend to them as lovingly as I do the cutting garden flowers up behind the potting shed.

I went up and down the rows. And you can see from this picture that I really have a swathe of them. The white ones were up first and are the most floriferous. (That’s a word I’ve never used before.) But it is the vermillion pink ones I admire best. Part of the cosmos tall mix packet. Can one save seeds from these? I imagine I can. And I will definitely be sowing more next year. Along with even more flowers in this part of the garden. Why waste space on dead sensible leeks when you can have flowers to gaze at?

I had wanted to show one more picture from my morning’s dead heading. There was the most amazing bee working its way down the cosmos as I was working up. A huge black creature that was about twice the size of a bumble bee. Couldn’t resist trying to snap it as it collected pollen. But wouldn’t you know it? It was very excited about finding a very tall blue flower with long sleeves and floppy hat so close by. It kept coming at me as I tried to get my camera out. Lots of wild shots as I batted it gently away and then I just bid a swift retreat. No wildlife pics today. 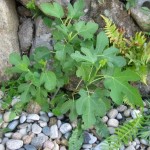 But I do have a picture of the fig tree in the strawberry bed. It is coming along nicely. Lots of new growth. And who knows? In a few years time I may join the ranks of the late Christopher Lloyd and become a fig pig. Bring it on.