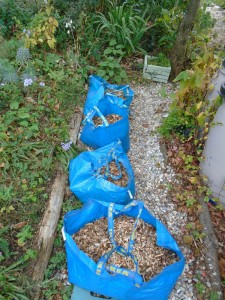 Gold. Well the equivalent for the gardener. Mulch.

Bags and bags of it. The hardest decision I have had to make was working out which lucky part of the garden gets this wondrous stuff. It suppresses weeds, keeps the ground warmer in winter, holds in the moisture, and actually improves the soil.

If it were a face cream I’d make a fortune.

Because I use a mix of fresh branches and dead ones, it creates a perfect combination for attracting the wondrous mycelium fungus.

And a quick pause there: I want to introduce you to my friends Paul and Alice. They also live in France; further east near the Alps. And they are embarking on that mad adventure of creating their very first garden. 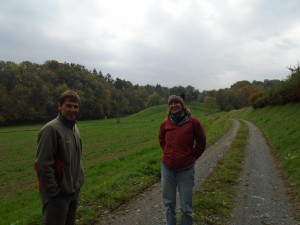 Round of applause for two intrepid home builders and garden creators.

Yep, not only did they move out of a top floor apartment in the centre of Chambéry with no outside space, they decided to build their own home as well. In the countryside.

So over the next month or so I am going to add a bit more information and detail to my blog posts so Alice and Paul can catch up.

We are all in different stages of learning and enjoying our gardens.

And on that note, here is a good link to those keen to learn about improving your soil: 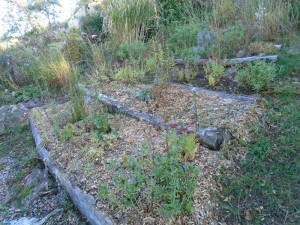 I put mine in on autumn to mitigate against any nitrogen robbing qualities this slightly fresh mulch will have on the plants.

Well, that’s the official reason. But actually I mulch now because I have the time.  The weather has cooled down enough to mean I’m not spending time mowing or strimming. (And the mower is at the repair shop, so I can’t zip about the lawns anyway.)

And I had the raw materials.

So two happy days later the mountain is no longer ringing to the whine of my chipper and the terrace bank has had its first tender loving mulch since I created this garden a few years back. 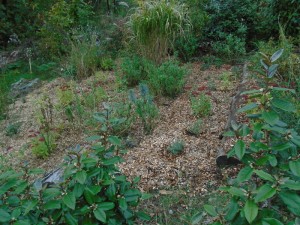 To my shame I have neglected this part of the garden.

The hedge around it gets more care. But this is a start. Weeding out the rogue asters, clary sage, endless oak seedlings, brambles, and annual weeds has meant I can actually see the sedums now.

And I have covered all the beds with the mulch, even though there are a lot of plants I need to move next spring. Somehow or other I have to get that huge miscanthus out. And thin out the valerian (centranthus ruber). I have removed all the marjorams. But I need to also attend to two peonies and a phlox which didn’t find the location very acceptable. 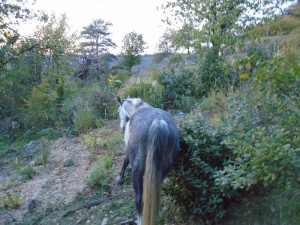 And the gaura once I have collected the seed.

Who would want to live here? Never watered, thin soil over granite rock, blazing sunshine. It doesn’t get harder than this. The sedums are happy.  And the santolinas I put in last year have not grown much. But they haven’t died either. So I call that a result.

I was just finishing up the very top bed towards the end of the day when I had that eery feeling I was being watched.

I knew it wasn’t Artur as he was asleep inside. This feeling was confirmed when I turned my head and was confronted by half a tonne of escaped horse. 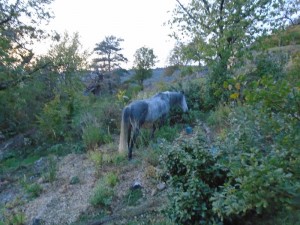 Ulysse. Delighted for some company. Or just keen to test out my newly weeded and mulched beds. He stomped about and generally made a nuisance of himself.

I couldn’t catch him until I found out where he had breached his fence. So I knew that was the end of gardening for the day.

Up to my neighbour’s farm, I walked the perimeter and found where the fence had been torn down. He’s a greedy horse. Adorable, but greedy. And the pear tree had shed its fruit on either side of the fence.  He had eaten his crop on his side, and it was only a matter of heaving on the fence to reach the juicy fruit on the other side. 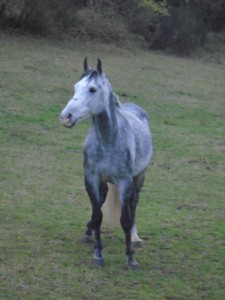 And while he was out, why not pester that nice human next door who always gives him apples?

Grrr. It took ages to get him back.

He is a sociable creature. And with Jean Daniel away, he kept trying to seek out more company.

He escaped one more time. I will spare you the drive around the farms trying to work out which other horses he was currently canoodling with (freshly gelded, old habits die hard).

But eventually I managed to reunite him with his companion Canaille and hoped I wouldn’t have any more equine adventures in my garden beds.

At least on the drive I could spot where my next crop of branches and sticks are coming from. We have some land on the lower side of the road. We rarely go there as it’s a well managed oak forest with mixed planting of chestnut and pine.  But I have spotted some coppiced chestnuts in there that I can harvest and soon the motor will start whining again and eveyone will know I’m making glorious mulch.