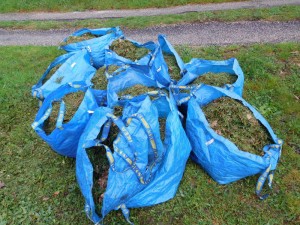 So where do I put it all?

Mowing season has begun in earnest and the grass cuttings collection is huge. You can see these blue bags dotted all over the farm. Full of the second grass mowing.

All this rain (and we have had oodles in the past fortnight) means that my once a fortnight chore if I am really keen has turned into a weekly event.

But that’s only because I like to get my curved patterns in early and encourage the wildflowers to grow in the long grass.  The rest gets mown nice and short to deter the brambles, nettles and endless pretty weeds I don’t really need.

Up until last autumn I would have diligently bagged up all the grass cuttings and shoved them onto the lush wasteland that is the soft fruit orchard.

It had always felt like a losing battle there.  The large area between and behind the jostaberries, white currants, red currants, black currants and gooseberries are a potential jungle just waiting to sprout. 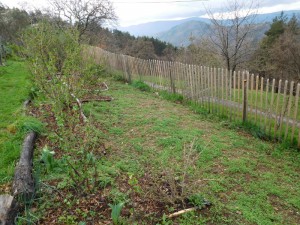 If I had time at the beginning of the year I would weed it thoroughly and try and put down a mulch. You can’t imagine the number of things I have tried: weed proof fabric (hah) thick good bark and wood chips, straw one year. And mainly a foot thick layer of these lawn mowings which I would fling on in thick layers of hope.

Nothing worked. It just seemed as though I were feeding the area rather than suppressing what was trying to emerge underneath. 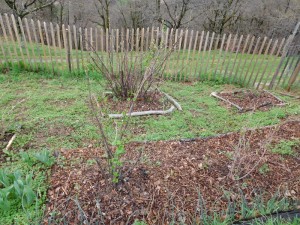 This year I am trying my hardest to out think the problem.

If things insist on growing, then try sowing something you actually like and see if they smother the rest of the unwanted grasses.

Nothing will hold back the brambles. I just have to keep an eye on those. They sneak up behind the fence. (Which Nicolas kindly repaired after it blew down in a February storm.)

But meet the newly sown red clover. My attempt, this year, at keeping down the weeds. I toyed with fenugreek seeds; apparently they give a good tasty ground cover. But I need to try them in a small area first just to see if I like them. 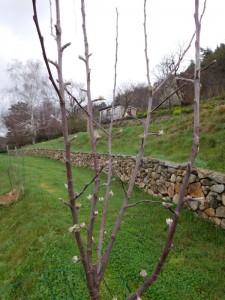 And if the clover does get going and actually flowers, the bees will be kept even more busy.

But back to mowing.  I bagged up the grass and was almost heading up to the soft fruit orchard on auto pilot when I realized I needed to put them somewhere else.

The orchard trees get their thick covering.  And it gives me a chance to do a quick weed around the base and check the newly re-instated tree guards are doing their job.

I am relieved to see the apple that was almost ring barked by deer is putting on some buds. Will it survive the brutal munching? Time will tell.

I actually have some rather daring design plans for this orchard.  But this is a mowing and mulching story, so that fun frolic will have to wait. 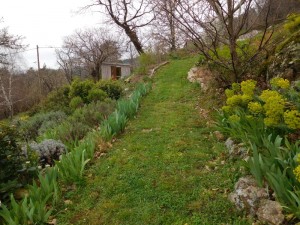 The rest of the grass cuttings have gone up onto the oak bank above the courtyard, between the rows of eragrostis and gaura.

The grasses have done well up there under stressful drought conditions, but I don’t know how much gaura has survived. 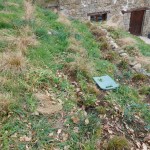 At least the little American oaks are still extant.  With so little soil between the granite rock underneath this huge bed I feel like I am conducting a diabolical bonsai experiment.

What? You can’t see the oaks and the mulch? That is because it started to tip down with rain and I had to sprint indoors. I even left my second favourite kneeling mat up there.   I’ll show the ‘after’ pictures when next I get a chance.

In the meantime, a shot of the orchard. The next but never say last, design project about to start. 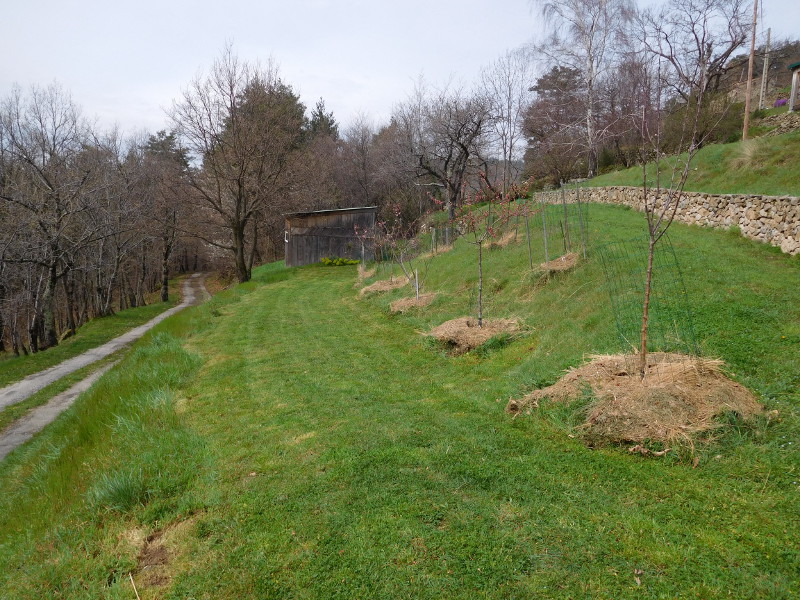 « Potting on seedlings » The mole rat damage in the hedge