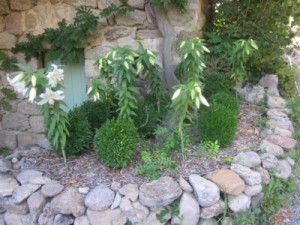 Up early to pick flowers. Isn’t that just the best sentence? I needed to pick a bunch for Madame Orisette at the market, and Daniele needs her dose of cosmos and lilies.

So I surged out with secateurs and came back with some colour.

I didn’t pick any lilies from this bed; they are to stay on and try to be decorative in situ. But I have lilies all over the place just waiting to be cut and vased.

I have to arrive at Vernoux market early as it gets too painfully crowded later.   And standing for almost fifteen minutes to buy tomatoes isn’t anyone’s idea of fun. Even though M. Bois is entertaining. 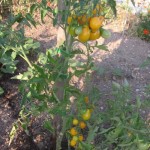 There are plenty of tomato sellers, but most of us like to give M. Bois our custom as he is the only stall holder selling veg in the worst of winter. 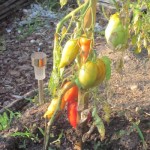 I don’t have enough of my own tomatoes in the garden just yet. But there are some.

And now I’ve returned and it’s only 930am. Ace. Butcher, baker (no candlestick maker) goat’s cheese and soap. And figs from Madame Orisette.

It’s going to be another hot day and I am spared chipping as the machine is not yet back from the repair shop. It will mean the stack of sticks in the car parking area will have to stay an extra week. It’s a bit of an eyesore.   And I really wanted to mulch the lovely perovskias and rosemaries under the plums. 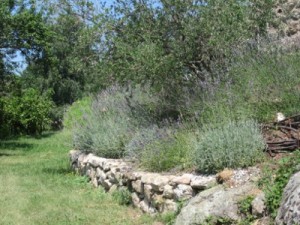 And speaking of lovely. I have finally managed to take a shot of the lavenders in front of the house.

I took flowers up to Daniele and came back with my favourite Balayn treat. Artur. 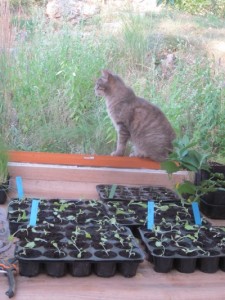 And he hasn’t been that far away from me all day.   All is right with the world when you have a feline companion stalking you in the bushes.

I brought out some more scented ones from Camden Garden Centre. They were a bit battered, but unbowed. I have made a little display for the window in the gite, and potted on the rest. 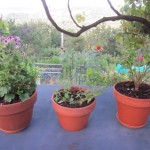 They weren’t happy in their small pots, so out came some clay pots and I worked away at the table under the vines.

And then the day seemed to drift in a heat haze. I made 16 pots of fig jam. Picked almost two kilos of dark plums from the trees in front of the house.

Washed the new pots which now sit at the front door. Goodness the list was long.

But naturally not many of the things were on my master summer list.

I am still so dazed knowing that I have five whole weeks here without having to move pots and plants into the shade to save them from death. 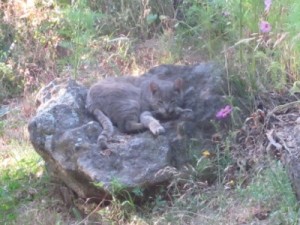 I did do some watering of the newly planted out nicotiana, and the parched sunflowers up at the new hedge.

The spring is still flowing well. But it is not overflowing for the first time this year. But I don’t need to worry about switching over just yet.

The Balayns switched over last weekÂ  and found putrid water surging through the pipes.

The line we have from the mains to the three houses on this mountain travels over 800 metres underground.

And as none of us needed to use the water all year it has been stagnating for six months.   Luckily the water company came out and sorted the problem (let it run) so we won’t get a shock when it’s time for us to turn over the supply. 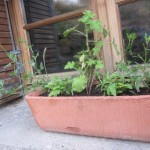