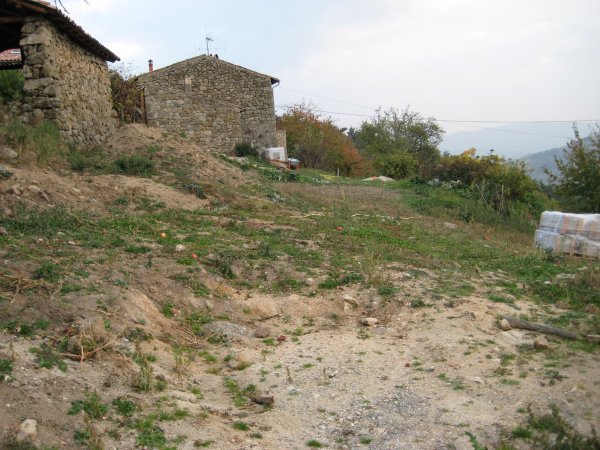 Seven years. It has taken me about six to finally work out how to grow vegetables. And one year to really enjoy getting it right.  Not the actual growing of the greens, one learns that pretty fast; but the aesthetic pleasure of growing food.

Here is the vegetable garden when we arrived. It is located right beside the main house and open barn (called the calabert.) The closed barn is behind the house and is where the silkworms were stored and then processed. And finally woven into thread. But that’s for another day. 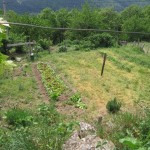 The potager faces south and is located on a free draining slope, and was enclosed with chicken wire as there were chooks all over the place. And brambles climbing up over the wire fences. And weeds. This potager had been abandoned when we bought it. And you know the consequences of Letting Things Go.

The farm has been in existence since the 1600s and that means someone has probably grown vegetables on this spot since then too. 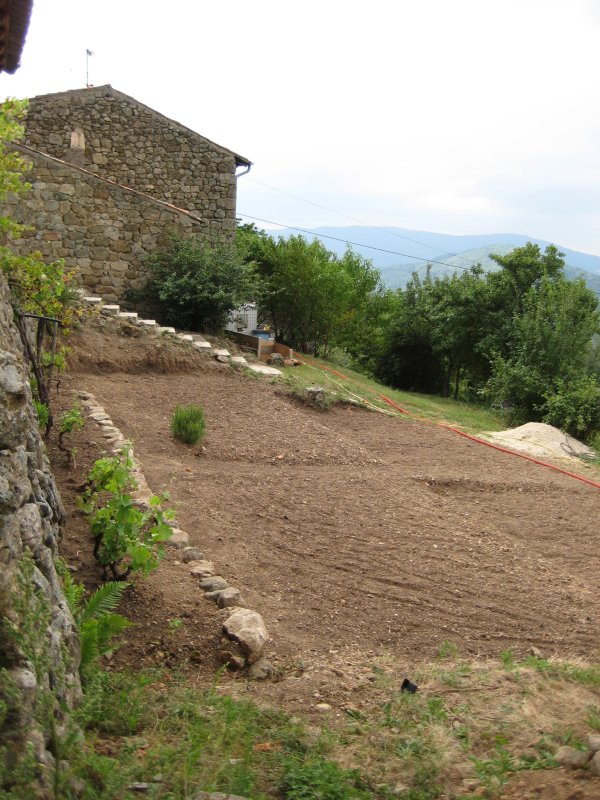 No pressure then to keep up the traditions.

The word potager simply means vegetable garden in French. But if you have travelled around this country you will know they have certain features. Rows and rows of veg of course; but also flowers. 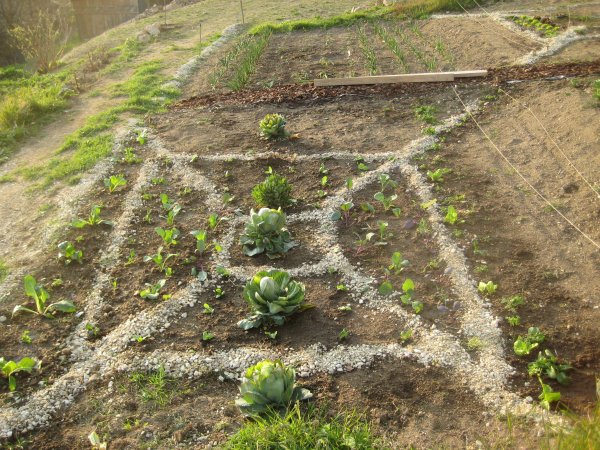 Every French vegetable garden seems to possess a corner of dahlias and cosmos. And marigolds.  We grow flowers to encourage bees who will come to our plots to pollinate our veg. It’s simple.

But what isn’t simple is getting the look right.  Around our part of France the potagers are very, very tidy. Weeded to within an inch of their lives.

Most people like to see bare earth between their rows of vegetables, herbs and flowers. And that means rather constant weeding.

Here is a picture of the potager when I finally wrestled it back. Bare earth. A small bed at the back for strawberries and the vines which grow up and cover the courtyard above for shade. I divided it into four and then got stuck into design books. 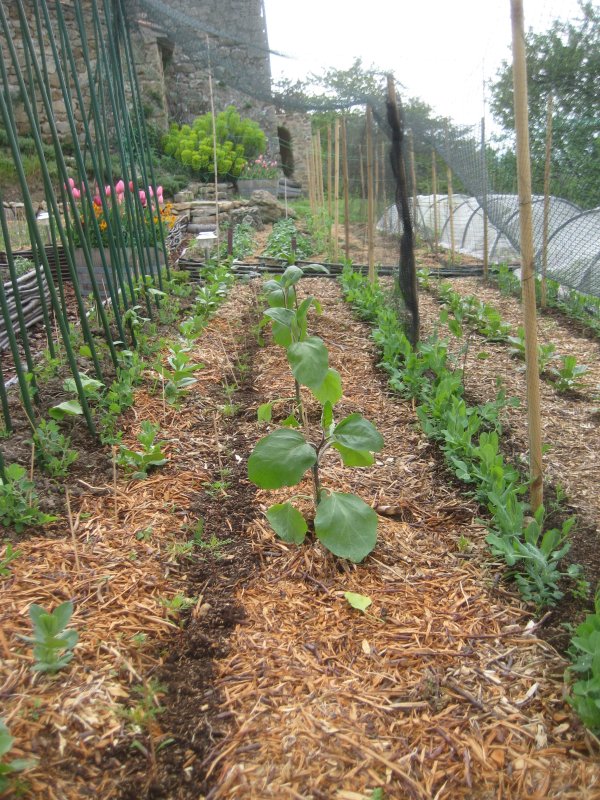 I had always yearned for a potager that would also be a visual pleasure. Step up Joy Larkcom’s Creative Vegetable Gardening. And thus began an absurd attempt to recreate what I saw in books.  We’ve all fallen for that.

What books don’t tell you (and I now know from my photo shoot experience) is that these pictures are a snapshot in time. One day perfectly preserved. 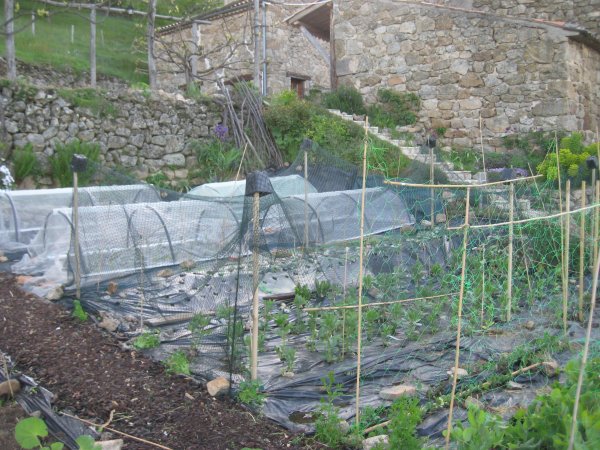 There are no weeds. There is no chaos. And you can’t see where the hares have got in, or the deer have sheered off the swiss chard, or just the imperfect growth. I seemed to spend more time weeding than anything else in the first years. 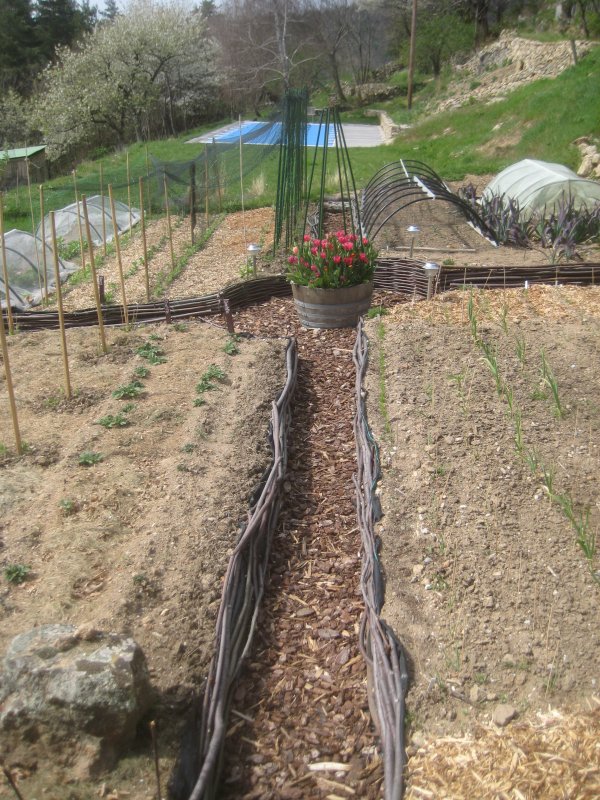 It worked. But it wasn’t a joy to behold.

I came to realise that I needed to divide this large 100 square metre space into quadrants to try and keep down the weeding.

So the paths came into being. I had thought it would be good to be able to get along the quadrants with a wheelbarrow. But I should have made them wider. I can do the wheelbarrow run; but I tend to snag myself on the chestnut poles. 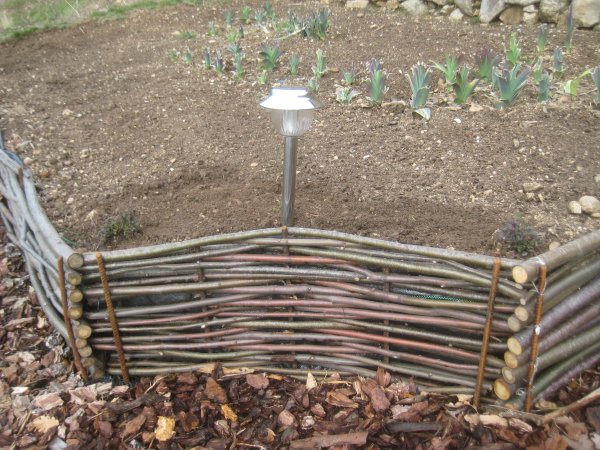 At least the aesthetics were finally coming into the picture.

And it gave me a chance to have a central theme. A large barrel in the middle where I planted up many bulbs – tulips and lilies – and gave a pleasing full stop to the centre of the action.

And that was how it stayed for two years. Seasons came and went. Heavy snow fell for about a week or two each winter.  But I wasn’t satisfied. 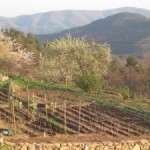 I still seemed to be weeding more than growing. And most of my fetching shots were in early spring when I had weeded and prepared the beds for the season ahead.

If you click on the picture it will enlarge. I’m running out of story and the pictures are way too plentiful.

So the radical change came in January 2013. Just before I travelled to Australia to meet the editor of House and Garden magazine. 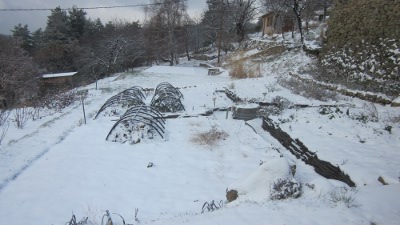 I blame Joy Larkcom again. I received for christmas her excellent book Just Vegetating. A memoir of her life as a vegetable gardener. If you can find it; it’s fascinating. Full of thoughts and discoveries.

She was a great explorer of other people’s’ techniques of growing food.  I was particularly struck by her exploring peasant vegetable gardens in Italy and Portugal. And gardens in China.

She learned so much. And so did I. Rows, small long beds no more than a metre wide. Facing south so the sun can track from east to west and evenly spread over the plants. 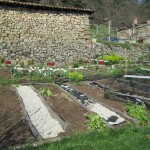 Hiding lettuce under other plantings to stop them bolting. It was a treat to read in a heavy winter when snow-covered my ground.

And I decided too that I needed more wooden supports in the newly excavated beds. By chance I was watching a documentary about a beautiful priory garden in the centre of France, in Berry. It was called Le Prieuré de Notre Dame d’Orsan. 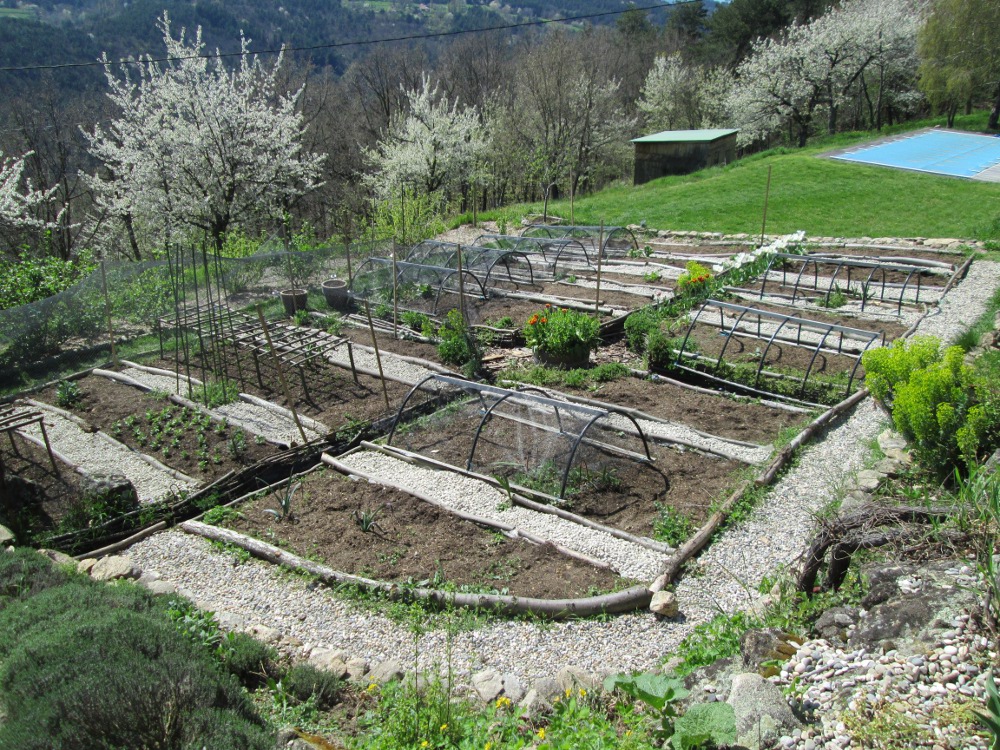 And I did what every self-respecting New Media gal would do. I snapped a photo of the vegetable beds shown on TV on my digital camera. Downloaded them and decided how I was going to make a similar structure. Don’t you just love technology?

Having one’s own chestnut forest is very useful for the raw materials. 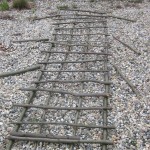 I needed 34 small trees to get the edges right; and endless straight thinner poles for the supports. A spot of carpentry (hilarious) and lots of tying in of poles and here is the finished product.

And one year on, I have no desire to change things. 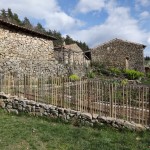 The runner beans, climbing spinach, cucumbers and nasturtiums only have to climb a foot or so up the supports before they can run horizontally along the chestnut grids. It makes it very easy to pick; saves the plants a lot of climbing before they start producing, and I get to have non bolting lettuce underneath.

I can walk easily between the rows without treading on small plants, getting wet or mucky, and I haven’t lost that much growing space. It would have been full of weeds anyway.

Add a new chestnut fence and even the deer and hares don’t get a look in. 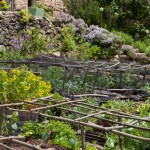 And my solution to the mulch conundrum? I buy in cheap as can be sacks of multi purpose compost every year and smother the beds a few inches thick.

It looks like bare soil (which pleases the local population) but actually smothers weeds, feeds the soil and also lets me pretend I’m up at dawn hoeing between the rows.  I almost look like I’m in a French at long, long last. 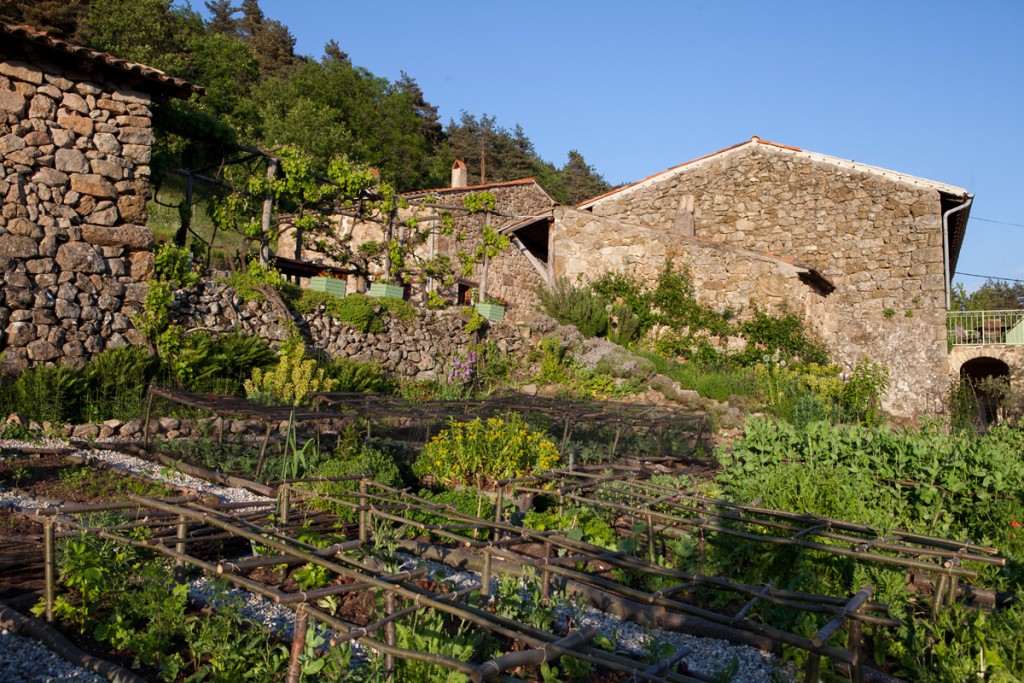 « The winter mulch for the garden » Hacking back the nettle patch