The barn garden – gardening on a slope 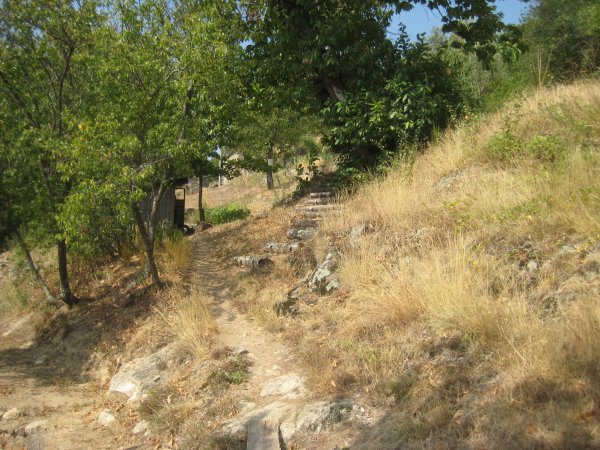 The garden area just beyond our open barn (which is called a calabert in this part of France) is the focus of most of my creative gardening work.

Mainly because it is my most trodden path, about sixty metres in length and I don’t know how wide.  From the house, through the barn and up the path to the potting shed is something I do at least four times a day.

And when I forget my secateurs, six. 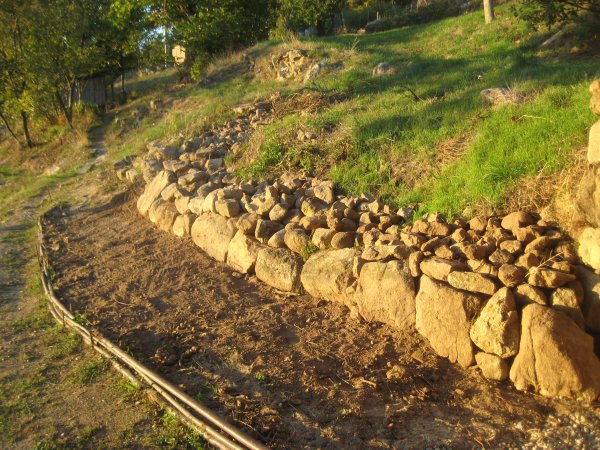 And when I need a break from work and have to go and pester Artur the cat, eight.  He always finds some sort of box or pot or precious tray of seedlings to snooze on in the daytime.

He has a few favourite locations. I’m ashamed to say that for the past two weeks he has found a zinc planter pot most enjoyable; it is round, full of old potting compost, and heats up nicely. 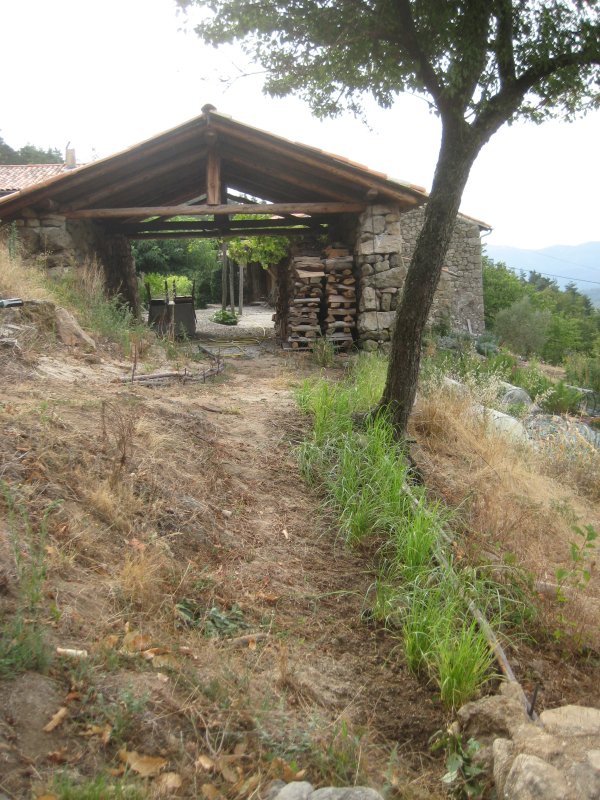 But back to gardening.  This part of the farm was where the chickens had their run. So in nine pictures I wanted to show you the evolution of first the lower part of the garden. And then when I have powered up on a whisky, I’ll do the rest.

And the main thing I wanted to stress is how often one can change one’s mind.  I think I redid this garden every year for the first three years. 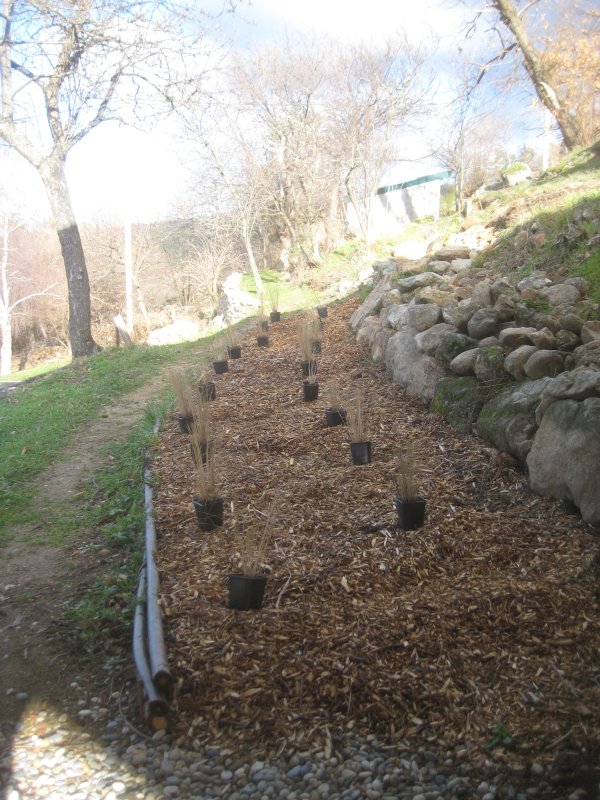 But first, the beginning.

There was a wall here once. This farm is full of dry stone walls and most were in a state of disrepair.  We spent the first few years rebuilding.

Luckily we had the services of a local lad who toiled for months and months on the ones around the pool and the lawn.  By this stage of the garden design process we had run out of energy and enthusiasm. 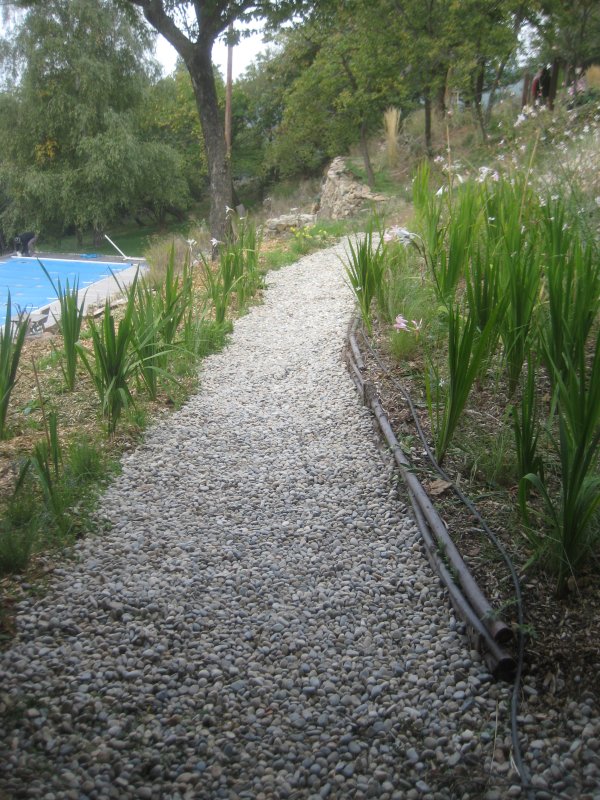 So the stones and rocks were just piled up to form a full stop at the bottom of the slope.  I regretted it for a few years, but now I think it makes a refreshing change from so much order.  This is the chaotic bit of the garden. And I seemed to want to follow the idea with the planting.

First up – the path.  A simple path of earth and gravel. I walk across it so many times the weeds are really negligent. And if any are fetching – there is a Gaura almost in the middle of the path this year – they stay. 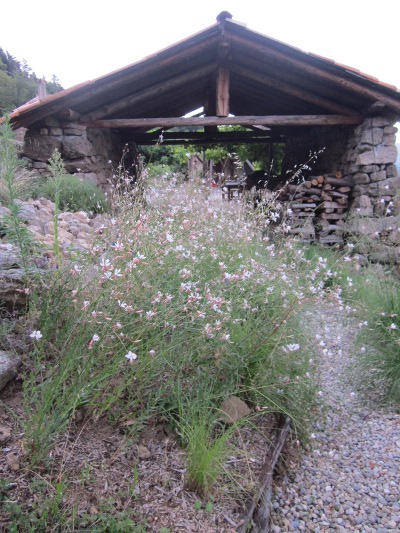 And to delineate the little long narrow beds, a simple chestnut log. All I needed to do was mulch heavily and come up with a plan.

Mulching is a familiar obsession in this garden. I loathe weeds, and have a favourite tool – a chipper. It means that I can turn any small branches on the property into a fantastic ground cover, soil improver, weed suppressor. Why, I’d sprinkle it over my cheese on toast if I could. 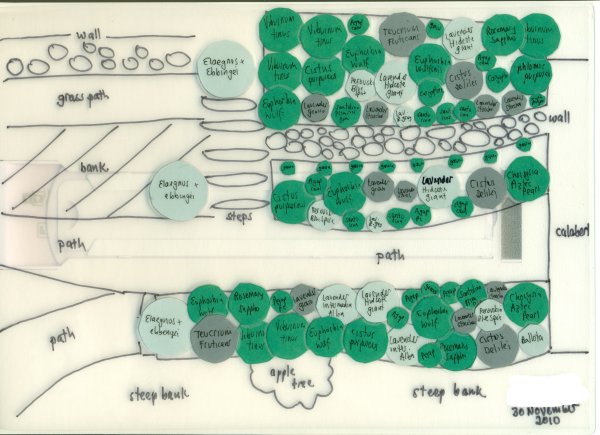 I use a combination of green branches – oak, chestnut, very little pine, mulberry in season, and then dead branches. We live in a forested area so I’m only limited by my laziness to pick up branches and have a good session.

I chipped, I mulched and then I thought grasses.  And bulbs. These are the two easy things in a large country garden. And my grass of choice is one I can grow easily from seed. It is drought tolerant, puts on good girth in just a few years. And looks great en masse. It is eragrostis curvula. African love grass? I must look it up.  I know it is a pest in many parts of Australia, so all grasses have to be well thought out. In this garden it does not self seed very much.

I tried Pennisetum but it was a damp squib. They looked, frankly, like weeds. 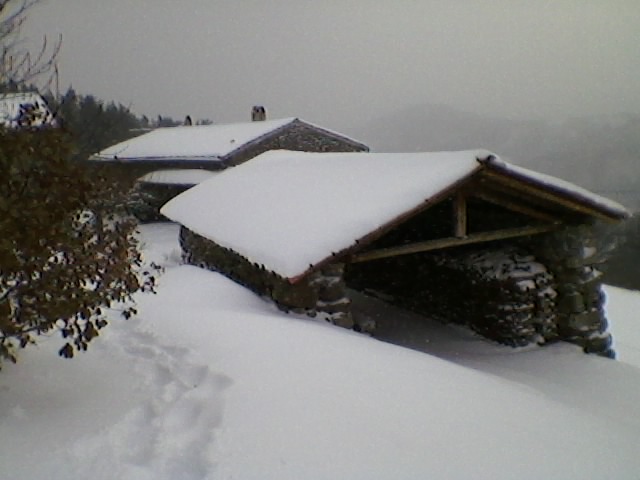 And then I thought Gaura, another easy (for me) grow from seed plant. I love its airiness and drought tolerance. But as you can see, I didn’t think very hard about scale. The grasses and the Gaura were ridiculous in this garden. They towered over the stones. They flopped, and they had to go.

Time to stop flinging plants at the problem. A plan was called for.  By this stage I realised an important thing about what I wanted to see. I wanted green. Grey at a pinch. But something.

When you live in Australia you are used to year round planting. There is no pause.  In Europe, particularly in gardens where herbaceous borders are a feature, people are used to looking on dead brown bare gardens for the winter.

I realised that if I were to walk up this path all year round I wanted to see living plants all year round too.  Not perhaps when it is buried under a foot of snow. But that usually only happens a few weeks every winter. 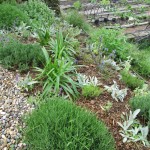 So I went back to shrubs.

The word shrub sounds so frumpy, don’t you think?  Not fetching. But I knew that this mediterranean garden needed mediterranean evergreen plants. So I laboured long on a plan and saved my money and did a big order of plants from the Filippi plant nursery. I decided to go for a large variety and trust to my skills at propagating and build up my plants in the rest of the garden as well.

This was in 2010. If you asked me to do it now, I would probably go for a mass planting of fewer varieties. But you live and learn. 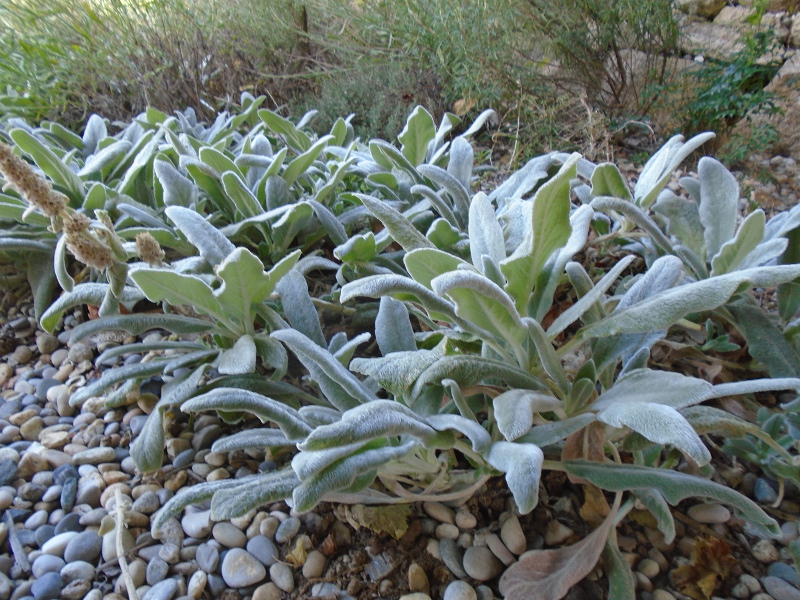 I’m going to stick to describing the lower path first and then segue into the upper steeper part of the barn garden. These two long narrow beds are crammed now.  But starting out there was a lot more mulch than plant.

These Stachys plants were a gift from my friend Leslie. And they are voracious ground cover plants.  A perfect foil if you mix them well. I have to yank out carpets of them every year now. But that’s fine. There is plenty of garden to place them elsewhere. 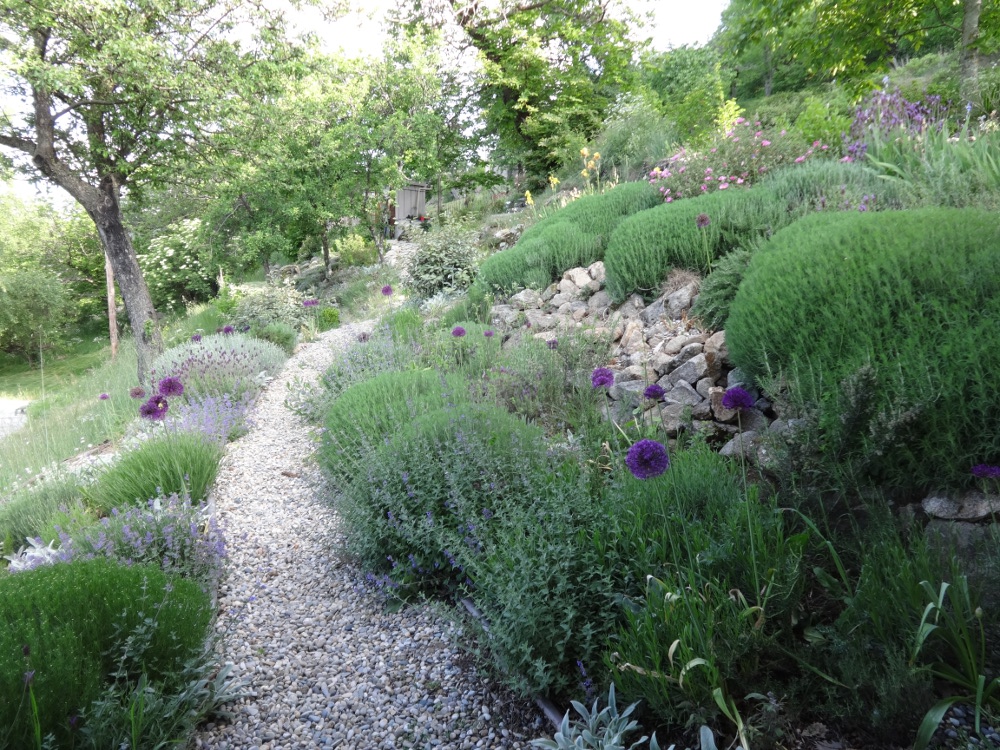 And these santolina primrose gems in among the aggies work very well. It’s a lush looking green no matter the light levels. And well behaved if I prune. The ballota was a revelation. Such a tactile plant. I wish I had planted it closer to the path, but then the urge to stroke and marvel at the furry leaves at close quarters might have put it under stress. 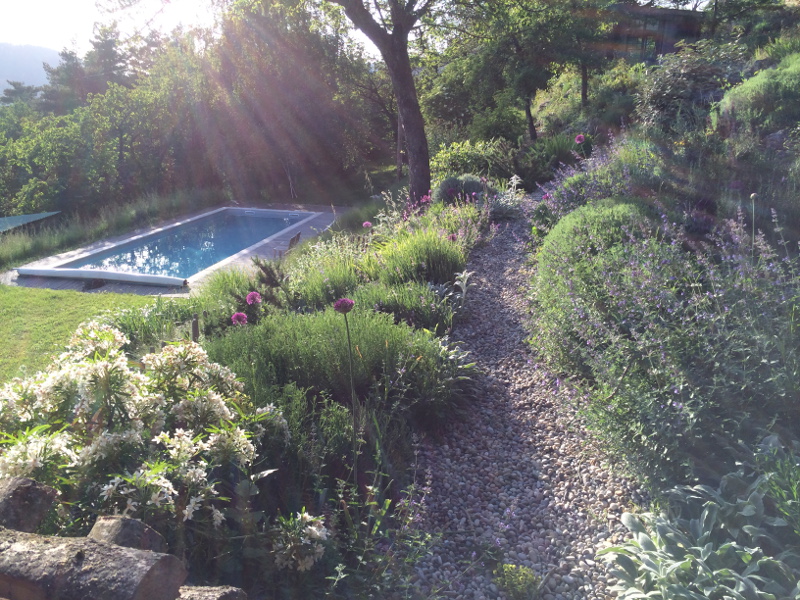 I plant allium Purple Sensations every year. This long narrow bed always does well with a bit of height. 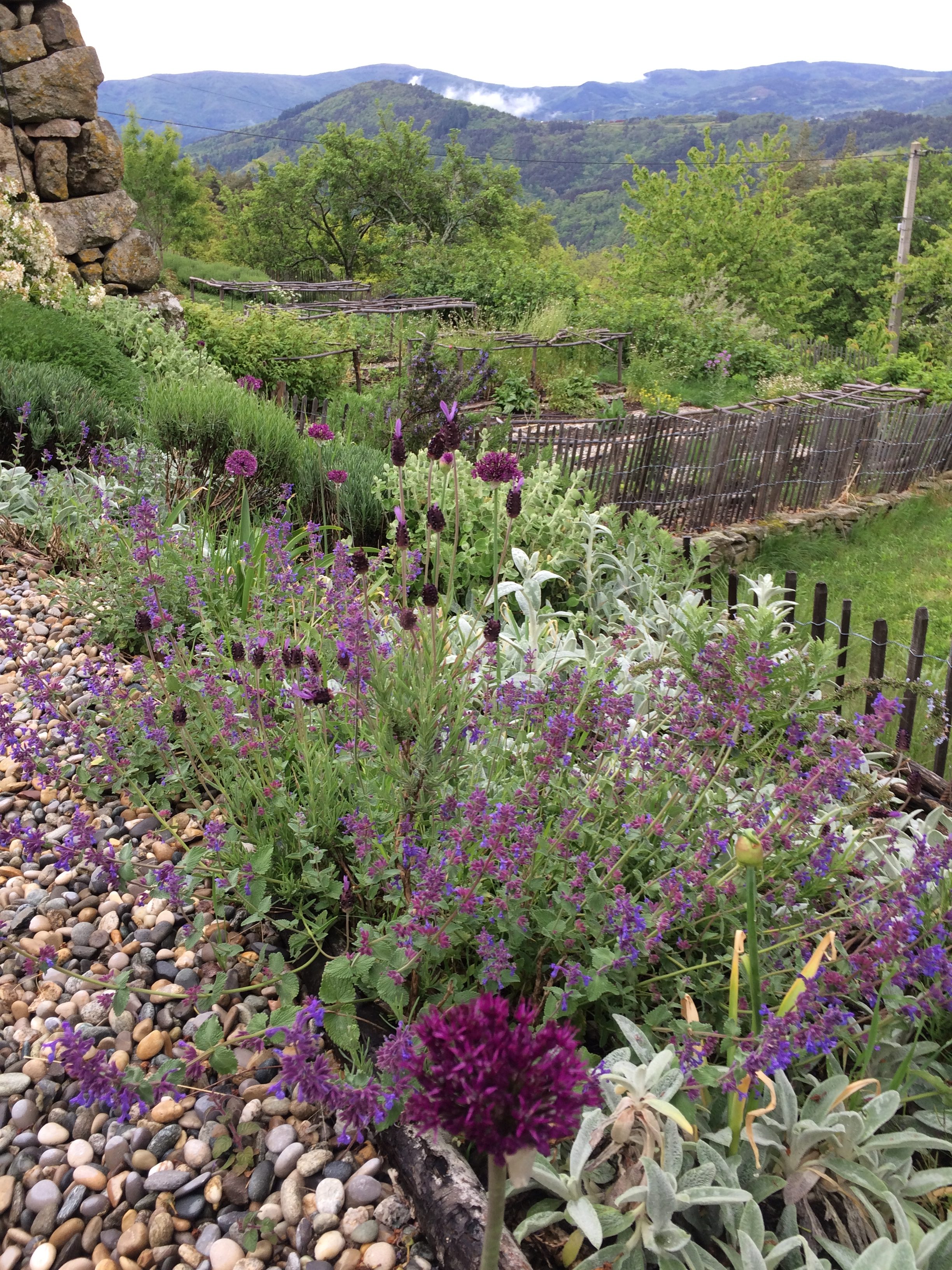 What a shame they are annuals. I never get any alliums to stagger through the next season.

They clash nicely with the nepeta. And the flowering rosemary in spring. 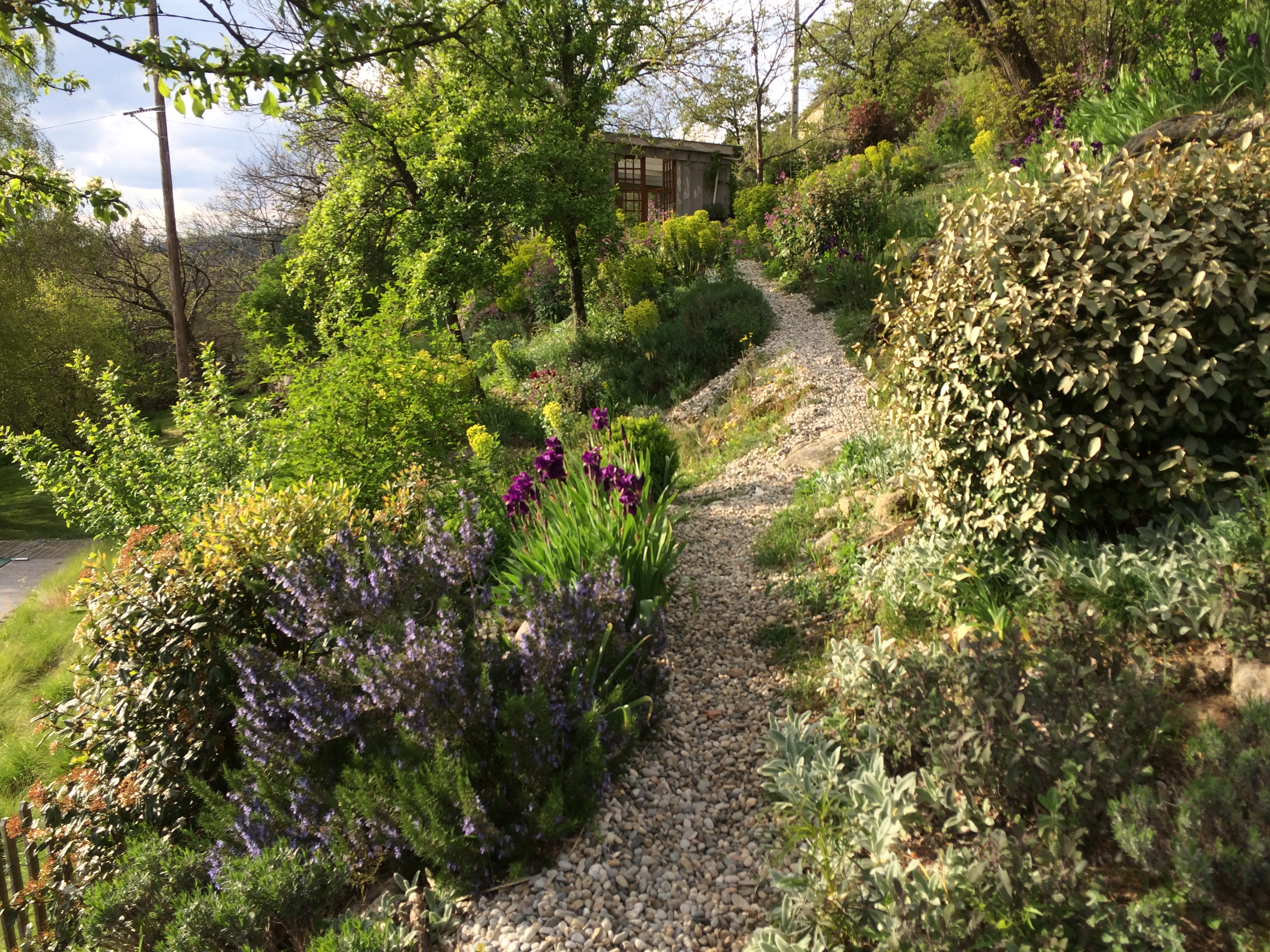 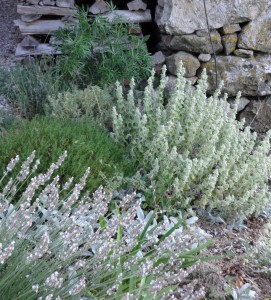 White lavender is a novelty. But nothing more. It only works in the early morning and late evening. But the santolinas and lavenders and Nepeta link the rest of the two long skinny beds quite well, I think.

Next up the slope.